In Karnataka's Kisan Panchayats, a Familiar and Crushing Tale

With the state government's Land Reform Bill coming as a death knell for farmers, the Delhi protest against the farm laws has breathed new life into farmers' struggle. 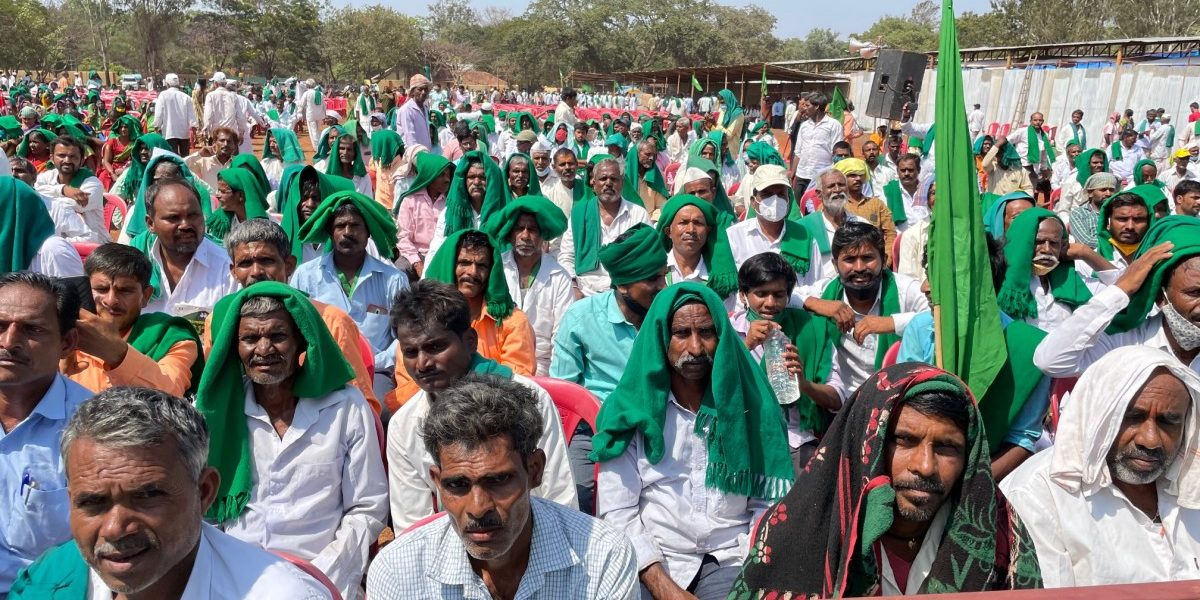 This is the third part in a series on kisan panchayats that are being held in the wake of the agitations against the three controversial farm laws passed by the Narendra Modi government. Read other parts of the series here and here.

Hubali-Dharwad: By 5 pm a white i20 car adorned with a green ryot (farmer) flag was occupied by motley bunch of travellers – a Dalit organiser, an advocate, an engineer and this reporter.

Our car was among a convoy that was taking farmer leader Rakesh Tikait to Dharwad and then to Belgaum for his third major panchayat in Karnataka. After a quick pit stop to garland the Kittur Chennamma statue at the heart of Hubli, the cavalcade headed out and a conversation on agriculture, MSP and the farmers’ revolution began. “But we don’t get MSP for even two crops here,” he added.

Before we can talk any further, the convoy crosses half-a-kilometre-long, but deserted APMC mandi on the outskirts of Hubli-Dharwad. It is one of the biggest mandis in northern Karnataka, but farmers rarely get government rates for crops.

“Leave MSP for a minute, Karnataka farmers are in a deeper crisis. The Yediyurappa government – surprisingly with JD(S) support – passed the Land Reform Bill, 2020, which is a death-knell for farmers, as it allows for corporatisation and non-agricultural people to buy agricultural land,” said K.H. Patil, an advocate practising in the Dharwad court.

“Slowly and steady, all safeguards for farmers have been removed, there is even relaxation of land ceiling limits in the state,” he added.

Lawyers have been working with farmers groups since last year, and the three farm laws have only brought them closer.

Once we enter Dharwad, groups of farmers, women, Dalit activists, journalists, students and police await Rakesh Tikait. Among them is Atmaanand, a graduate of agriculture, who speaks about how the Dharwad area is a transition zone agronomically, and this entire belt is good for farming.

Also read: The Tremors of India’s Farmer Protests Are Sparking a Rumble in Chautala

“Farmers here can grow from plantation crops – banana, mango, to maize and cotton. The soil ranges from black soil cotton soil to red loamy, which is great even for arhar and soy bean,” he said.

There is ample water and bountiful harvest – and yet many farmers visiting Tikait have cracked ankles and tattered slippers. ‘And in the case of Karnataka, where are the state’s farmer organisations and how do they feel about the current agitation?’ Photo: Author provided

Perhaps the most common question concerning Tikait’s maha panchayats is this: why does his message strike a chord with so many people across so many states?

And in the case of Karnataka, where are the state’s farmer organisations and how do they feel about the current agitation?

“The ryot sangh from 1984 to about 1995 was a very powerful and united force, politically, but due to infighting and horse-trading, only a shadow remains,” said Amin Pascha, a 46-year-old member of a ryot sangh.

Taking advantage of the divisions, political parties have seized their platforms. However, the farmers’ revolution in Delhi’s borders seems to have stirred things in Karnataka too.

“Rakesh Tikait gives farmers all over the country new hope, especially for ryot organisations. They have, after many years, united under his leadership, keeping difference aside,” Pache Nanjundaswamy, one of the organisers, said.

“It’s not only the farmers, but Dalit groups, trade unions, socialism-leaning groups and women have come together, under this banner, to demand that a united front be created,” he said, adding that Belgaum was about to witness this now. ‘The district administration, playing tricks, had withdrawn permission for putting up a “pandal or shamiyana” at the last minute, leaving the farmers and panchayat in the hot sun’. Photo: Author provided

Belgaum is black-soiled sugarcane country. It boasts of the largest number of corporate sugar mills, sweet water, good weather and an exploitative rate for sugarcane – Rs 2,500/quintal. For other crops like bajra or jowar, farmers are at mercy of the market.

With a by-election scheduled for April 17, and a sunny day touching 40°C, a few thousand-strong ryot parade goes through Belgaum on March 31 to demand fair prices for crops. Saree-clad women were the vanguard, followed by Rakesh Tikait on a bull cart. Their destination was a local college ground, which was the venue for the mahapanchayat.

The district administration, playing tricks, had withdrawn permission for putting up a “pandal or shamiyana” at the last minute, leaving the farmers and panchayat in the hot sun. But this only strengthened their resolve.

The meeting began with speeches and slogans. Under the shade of a lone tree, this author found a group of sugarcane farmers from the area.

Balappa Chunchanur, a 50-year-old farmer from Ramdur taluk, Halollali village, narrated his tale: “The water levels have gone down to 600 feet, and we depend on canal water for sugarcane crop. We spend Rs 50,000 per acre and get about 45-50 tonnes of sugarcane out of it. The price is not the only issue, sugar mills delay our payments and even cheat us on the weight.”

In kisan panchayat after kisan panchayat, this is the recurring message: India’s farmers are grappling with a toxic combination of meagre remuneration, bad policy and corporate markets. Adding ecological and political atrophy to the mix only worsens things.

Indra Shekhar Singh writes on agriculture and the environment. He is also the former director of the National Seed Association of India.