In Gujarat, Rakesh Tikait Spreads His Message of Farmer Unity

While many issues resonate, the movement will struggle with political questions as it moves along. 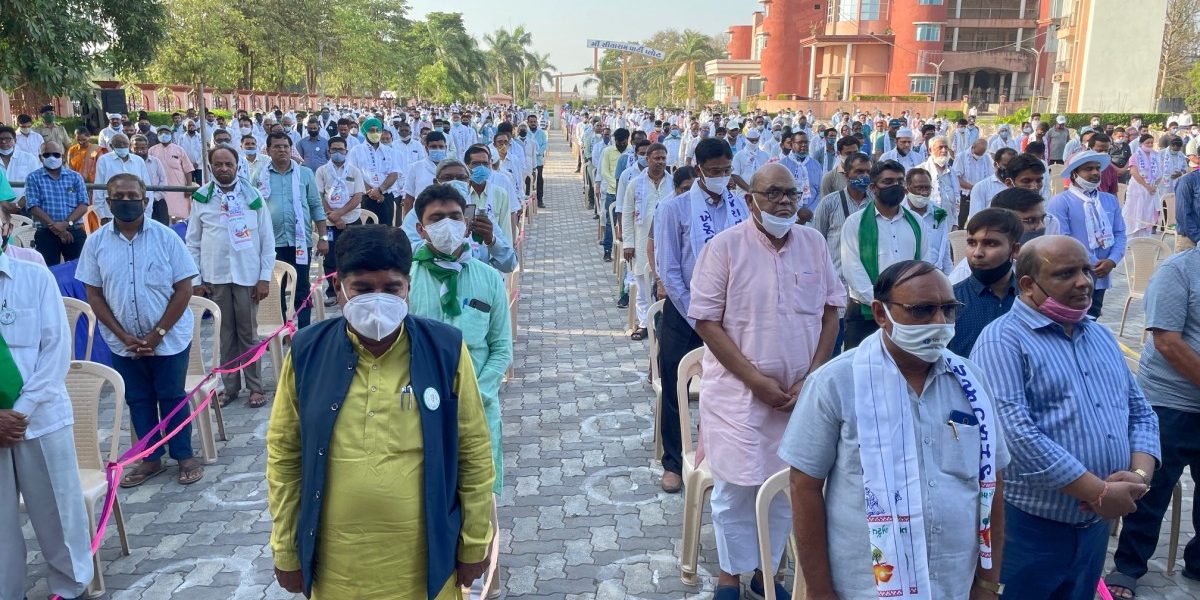 A farmer meeting in Gujarat during Tikait's visit. Credit: The Wire.

Palanpur: With the coming of the green mango season, Rakesh Tikait spent some time in Gujarat early this month, in an attempt to “seed a revolution”.

The battle lines were already drawn before Tikait’s journey to the state — the Gujarat government recently arrested Bharitya Kisan Union leader Yudhvir Singh while he was addressing a press conference in Ahmedabad.

Tikati’s plan was simple – make alliances, political and apolitical, and cover over 500 kms through a road rally. The route planned was one from the northern border of Gujarat, crossing through major agricultural and religious sites, and ending up in Surat in two days. Along with local organisers from Samyukta Morcha, he was joined by “Bapu” Shanker Sinh Vaghela, a former chief minister of Gujarat.

This reporter began the journey tracking Tikait’s entourage on a train to Gujarat, next to two farmers from Aravali district, who were unsuccessful in selling their potato harvest in Gujarat and now had travelled to Delhi’s Azadpur Mandi. “Modi ji promised us that our potatoes will fetch the price of gold, today we cant even get Rs 1 for a kg,” DK Chaudhary, a middle aged potato farmer, said.

“We spend 90,000 per acre growing potatoes, but once the harvest season approaches, the prices plummet, and the cold storage is pre-booked by a handful of merchants, who then dictate prices for farmers,” he added.

Chaudhary is among many, disillusioned Gujarat’s agriculture model, which is slowly growing more unsustainable for small farmers, even as it becomes lucrative for the free-market.

We continued to talk about his 15 trucks of potatoes waiting at Delhi’s Azadpur Mandi, while others came to greet Tikait. Still hundreds of kilometres from Gujarat, Rakesh Tikait was already stirring an overflowing pot.

The next morning, the dry, red-soiled and rocky castor territory of Banas Kantha awaited us. A cavalcade of over 300 cars led by ex chief minister Shanker Sinh Vaghela, which brought Tikait from Abu Road, made its first stop at Ambaji temple. Amidst drums, dancing and sloganeering, Rakesh Tikiat pointed out “how farmers and youth were living under the terror of the police state”.

But how many people agree with this sentiment? As the speeches finished and motorcade moved toward the next destination of Palanpur, this author cadged a ride with a former Gujarat MLA ( who had represented both the Congress and the BJP). He agreed to speak frankly, but only under the condition of anonymity.

The first question, on everyone’s mind, was whether the farmer protest and the mahapanchayats could translate into something tangible on the political front.

“The Congress cadre is dead in the state, even big names like Hardik Patel, have not attended the rally. How much political difference it will cause is yet to see,” the ex-MLA remarked.

But despite heavy police deployment along the way, villagers and farmers had come to greet and garland them. “Rising debt – Rs 2 lakh per farmer, drastically reduced incomes, and water shortage, were major issues for us,” Jaipal Mahadev, a farmer from Banaskatha, who had come to attend the rally said.

But can Tikait’s entry help improve the situation for farmers? “This area grows for potatoes, groundnut, jowar, castor, etc. Potato is the major crop, yet due to bad prices, farmers have to resort to throwing potatoes on the street,” P Sailesh, a farmer from Palanpur, says.

A castor farmer speaks of an equally bleak situation. To put this in context, India is the biggest producer of castor oil, much of it from northern Gujarat and Rajasthan.

“Farmers get as low as Rs 700 for their castor, where two corporations control all of Gujarat’s Castor. They sell raw castor abroad and buy back finished castor products from China and Japan, opening precious foreign exchange. Meanwhile traders also indulge in future trading on it. Castor is a perfect example of a cartel,” Jignesh Patel, a farmer from the Palanpur area.

The people assembled at Palanpur listened, and watched their leaders talk about the farm laws, but soon it was time to move to our next destination Unjha — Gujarat’s cumin city. On this route, the author found a place in a car with two unusual men – Gjendra Sinh, an advocate from Jamnagar and J K Patel, 40, farmer, who were also the main organisers of the campaign. Their stories revealed bitter infighting, political maneuvering and sabotaging of the campaign by political players.

“There are people from AAP and Congress present among us. Many of them whom have no relevance to the farmers cause, they are here to get their photos clicked,” Gjendra said.

By 7 am, the motorcade reached Gandhi’s Sabarmati ashram, a uniquely 5-star adobe on the Sabarmati waterfront. Across it stood a high rise luxury apartment that cast its shadow on the press conference taking place. Rakesh Tikait gave the same message — “Free Gujarat” by “freeing farmers, press, youth, police and citizenry.”

The second day was politically charged as the caravan stopped at Sadar Patel’s house, and then his major ashram – Swaraj Ashram, Bardoli , and also gurudwaras all along the way. The marginalised groups of Gujarat politics – Muslim women, the Chaudhary community, Sikhs, ex-service veterans, farmers, etc – were attracted to this motorcade and vented their pain on everything from demonetisation to rising LPG prices.

“Rakesh Tikait is giving us new hope, he is the first leader, who we can trust, and can actually capable of fighting Modi,” Rabiya Sultan, a middle aged women, said.

The day went on, and towns and villages kept passing by. The most interesting aspect was that from the dry rocky land with castor, jowar, etc now we entered fertile soils with abundant water. By the time we reached Surat, one knew, an agrarian paradise was here. “If you drive for a kikometre on this road, you will see sugarcane, castor, cotton, mango, banana and even eucalyptus all growing side by side, this is the best land,” Manish Zaveri, a farmer in Bardoli tells us. “But unfortunately, people here don’t want to farm. Most of the people are either earning from abroad, give land to tenets or have sold their lands for industrialisation.”

Among all this talk, we arrived at our last stop – Shiv Mandir in Bardoli and the last public meeting of the rally. By now the author had a taste of Gujarat, and to probe matter further began a conversation with 40 year old Ibrahim, who farmed sugarcane in the area. “ If revolution has to begin in Gujarat we need 50 Tikait’s in every village. Otherwise it’s all fruitless. People here are very scared of the atrocities, of the police-raj.” Ibrahim said, refusing to mince his words.