Rallies, gatherings, and other forms of demonstrations were reported from Maharashtra, Madhya Pradesh, Punjab, Tamil Nadu, West Bengal, Jharkhand, among other states. Farmers take part in a tractor rally as they protest against the new farm laws, during their Kisan Gantantra Parade, on the occasion of 72nd Republic Day, in Amritsar, Tuesday, Jan. 26, 2021. Photo: PTI

New Delhi: In contrast to the violent scenes witnessed in Delhi during farm law protests on Republic Day, farmers in at least 20 states in the country on Tuesday carried out largely peaceful protests, including tractor rallies, calling for the rollback of the Central farm laws.

According to a Hindustan Times report, rallies, gatherings, and other forms of demonstrations were reported from Maharashtra, Madhya Pradesh, Punjab, Tamil Nadu, West Bengal, Jharkhand, among others.

On National Highways in Punjab, especially in Patiala and Sangrur districts, a large number of protesters were seen. The protests were largely peaceful, with no reports of violence. At different points on their way, farmers organised langars, and a number of volunteers offered free medical services to the protesters.

Jang Singh, a district president of Krantikari Kisaan Union, told Hindustan Times that Tuesday, January 26, 2021, would be remembered across the country as the day when a large number of people took to the streets to fight for their rights.

Punjab farmers said at least one person from each of the nearly 12,000 villages in the state is in the national capital to register their protest against the Central farm laws. 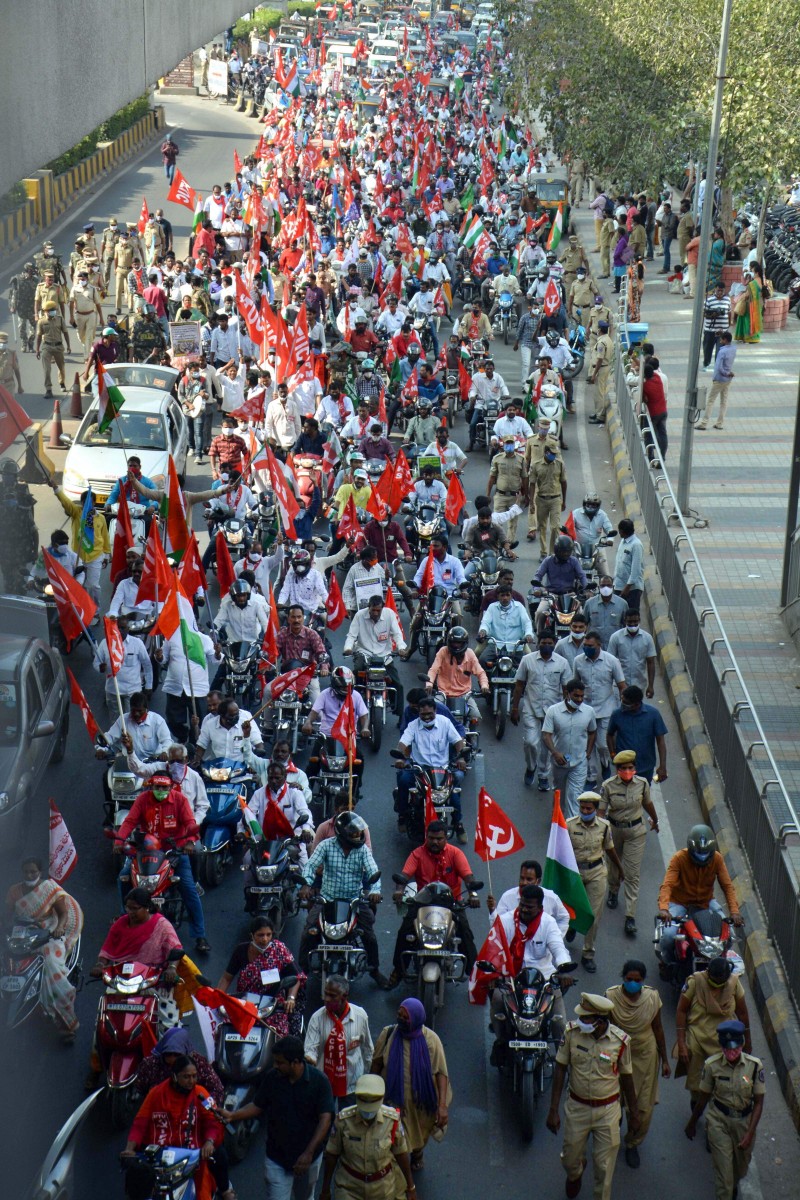 Farmers’ rallies across Haryana remained peaceful to a large extent, barring Faridabad where police batoncharged at protesters who made a bid to enter Delhi.

According to the state director general of police, Manoj Yadava, no violence was reported from any part of the state.

Maharashtra also witnessed large scale demonstrators across the state, with a number of protestors making their way to the state capital, Mumbai.

A large number of farmers congregated at the iconic Azad Maidan in the city to unfurl the national flag, and to register their protests against the Central government.

The protests in Mumbai had the support of the triumvirate government of the Shiva Sena, Congress and Nationalist Congress Party, which had on record slammed the Modi government on the recently enacted Central farm laws.

A number of protestors in Karnataka had reached Bengaluru to extend solidarity with farmers agitating in Delhi against farm laws. Although initially, the police refrained protesters from entering the state capital, they were let in after some time. The Bengaluru police allowed 125 tractors to enter the city to conduct a rally.

As for Tamil Nadu, the principal opposition party DMK extended its support to protestors and the farmers’ unions to take out rallies in a number of districts. Although the demonstrations were largely peaceful, minor clashes were reported from a few districts. No injuries were reported. The state government led by the NDA constituent party AIADMK has been in the favour of Central laws.

In West Bengal, where the ruling TMC and BJP are engaged in a pitched battle in the wake of upcoming assembly elections, large rallies were witnessed across the state, demanding the repeal of Central farm laws. The Left parties also organised some of the biggest rallies in the state, especially in East Burdwan, Hooghly, Murshidabad and East Midnapore districts.

In the BJP-ruled Madhya Pradesh, protests were seen in 20 of the 55 districts in the state. A 15-kilometre tractor and motorcycle rally was taken out in the state capital, Bhopal. Protestors accused the police of not allowing rallies in urban centres. In Barwani district, a 16-km bullock-cart parade was carried out. Rallies were also taken out in Raisen, Shivpuri, Bhind, Morena and Gwalior districts.

As for Jharkhand, the All India Kisan Sabha, Left parties, the Congress and RJD took out tractor and motorcycle rallies in the different parts of the state. The protestors also read out aloud the Preamble of the constitution urging the Central government to pay heed to their grievances and rollback the farm laws.