The unorganised nature of the walnut business in Kashmir, along with primitive methods for harvesting followed by locals, are the main contributors to the high rates of injury and death associated with harvesting walnuts. 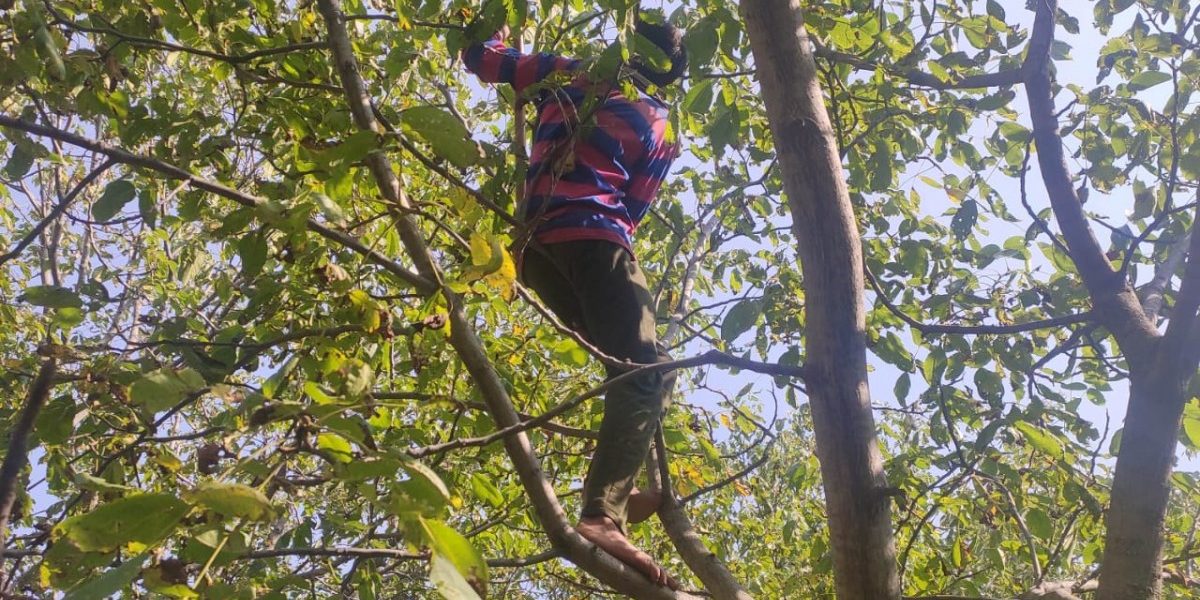 Harvesters may need to climb 10-20 feet up on the slippery walnut trees to obtain the fruits. Photo:

Srinagar: Struck by crushing poverty and clueless as to how else to continue his studies, 21-year-old Irfan Ahmad Trag climbed up a tree to pluck walnuts, which he would have then sold.

But the young man from Amirabad village in South Kashmir’s Pulwama district had none of the skills needed to pluck walnuts. He fell from the tree, suffered fatal injuries and was declared dead by doctors, says his uncle Zahoor Ahmad.

Trag was studying engineering and had lost his mother in 2009.

Plucking walnut is considered to be one of the most dangerous jobs in the Valley, involving the scaling of giant trees, maintaining balance, while simultaneously beating a fruit-bearing branch with a long stick, locally known as a laanz. The walnut tree, cultivated mostly in the rural areas of Kashmir, is unique in that it has a very slippery surface and grows to a height of 10-20 feet.

It has been a year since Trag died but there is no end in sight to the loss of human lives during walnut harvest season in Kashmir.

In just two weeks since harvest season started in the valley, seven people have already died.

Jammu and Kashmir is the country’s major walnut producing region, with production of around 2.66 lakh metric tonnes on 89,000 hectares of land. It contributes to more than 98% of the total walnut production in India. This comes at the cost of human lives.

Doctors in the Sher-i-Kashmir Institute of Medical Sciences (SKIMS), Srinagar, including prominent neurosurgeon Dr. Nayil Khursheed, told The Wire that the neurosurgery department has noticed that walnut tree climbers tend to be the sole earners of their families. Farooq Ahmad Mir, a labourer by profession, was one such example.

Mir fell from a walnut tree and died on September 17. He was 45. He is survived by five daughters, one son, who is disabled, and his wife. Since his death, the family has struggled.

According to his cousin Abdul Aziz, Mir, who was from the Andoo village in South Kashmir’s Anantnag district, was not an expert in walnut harvesting and poverty had compelled him to take the risk. “He would usually avoid climbing on trees on Friday, but this time he took the risk,” Aziz said.

On that Friday, just before prayers, Mir, who was the sole earner of his family, lost control on a 20-foot walnut tree and sustained grievous chest injuries. He was taken to the nearest health facility in Shangus. From there, he was referred to Anantnag Medical College, where doctors declared him dead.

The next day, some 65 kilometres away in the Nigeenpora village of Tral in South Kashmir, another labourer, Bashir Ahmad Bhat, fell from a walnut tree and died on the spot.

According to his son, Arshid Ahmad Bhat, Bashir (65) had 45 years of walnut harvesting experience. “On September 18, around 10.30 am, I, along with my father, was busy walnut harvesting when suddenly, I heard a cry and found my father lying on the ground in a pool of blood. His head was cracked and blood was coming out of his mouth. I carried him to the nearest hospital where doctors declared him dead,” Arshid said.

On one hand, people associated with the walnut industry in Kashmir are losing their lives but on the other, production levels are more or less stagnant, prices are falling and the market is shrinking due to rising imports from the US, China and Chile. Walnut being processed after being harvested. Photo: Irfan Amin Malik.

Doctors in the Valley said that a fall from a tree can lead to major visceral, complex facial and debilitating spinal injuries. The spinal injuries, along with the concomitant neurological deficiencies, can lead to extended hospital stays and long-term disabilities. These patients and their families also often become depressed and develop various neuropsychiatric problems, which include suicidal tendencies.

During the current autumn season, hospitals across the valley, including peripheral and tertiary care hospitals, see several patients who have fallen from walnut trees.

A senior orthopaedic surgeon, Dr. Mohammad Yaseen, who has been treating fall victims in the valley said that several injuries can be sustained in a fall from a walnut tree: head injuries, facial injuries, fractures of long bones and so on. But the worst are spinal cord fractures, some cases of which develop into paraplegia or even quadriplegia.

In extreme cases, a person with spinal cord injuries survives, but remains bed-ridden or immobile for life.

Yaseen (36) recalled that, during his duty at a sub-district hospital in Tral, some 40 kilometres from Srinagar, he treated more than a 100 cases every year. “During the walnut harvesting season, mostly in September and October, we would get dozens of fall cases each week.”

Dr. Shah Nisar, an orthopaedic trauma surgeon who is working at a tertiary care hospital in Kashmir, told The Wire that those who suffer severe injuries either die on spot or at peripheral hospitals. “During the harvesting season, 4,000-5,000 mild to severely injury patients are admitted to different hospitals across Kashmir. They are admitted anywhere from severe trauma neurosurgery wards to general and orthopaedic surgery wards. As many as 100-200 people also die at both peripheral and tertiary care hospitals,” Nisar said.

The lack of trauma care facilities in rural Kashmir contributes to the toll and delayed referrals worsen the damage.

According to a study conducted by the department of orthopaedics of the Government Medical College, Srinagar and the University of Kashmir, around 120 cases rising out of falls sustained while picking walnuts were reported between March, 2006 and October, 2007 at the accident and emergency department of the Government Hospital for Bone and Joint Surgery in Srinagar.

These accidents involved young, robust males, but are associated with considerable mortality (24.13%) and morbidity (18%) rates. Spinal injuries due to falls from trees have been the focus of a number of reports.

Another retrospective study conducted on all patients admitted to the Orthopaedic Department of the SKIMS Medical College between January, 2003, and December, 2007, revealed that 94% of falls occurred between August and October, the harvest period in the valley.

“Of the 115 patients, 63 (54.7%) had associated non-orthopaedic injuries. Head injury was the most common associated injury, presenting in 34 patients (29.5%). Thoracolumbar (16.5%), calcaneum (10.5%) and distal radius (8.7%) fractures constituted the common fractures encountered in the victims,” the study revealed.

The major reason for falls from trees, according to doctors, is the primitive method of nut collection that is followed. The workers collect them by standing on the branches of a tree and using a stick. During this process, the victims lose their balance and fall. The slippery nature of the bark adds to the probability of falling. Another cause for falling is the branch giving way while the worker is perched on it. 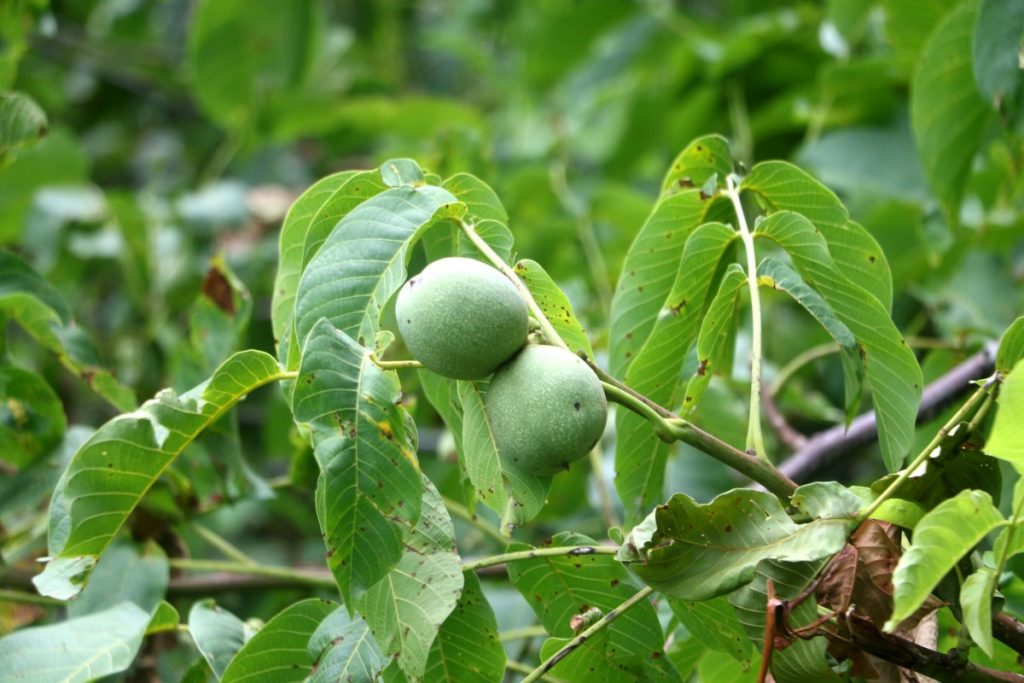 These studies suggest that adults and young boys are the chief victims. Women usually collect and process the fruit.

According to the experts at Sher-e-Kashmir University of Agricultural Sciences and Technology (SKUAST), Srinagar, the farmers in the valley still use traditional practices both during the pre-harvesting as well as the post-harvesting season.

“Human lives would naturally be at stake when traditional techniques are used in harvesting. It is common for the climber to lose his balance and due to lack of any support, fall to the ground and get injured. The fear of losing human lives will continue to exist unless we organise the unorganised walnut orchards in the valley,” said Dr. Syed Zameer, head of department Food Science and Technology at SKUAST.

Aamir Ali, who is the nodal officer for the State Emergency Operation Centre (SEOC), J&K, told The Wire that, in view of deaths of people falling from walnut trees, SEOC has issued fresh norms and advisories for farmers.

“Falling while harvesting walnuts has become an occupational hazard. If precautions and safety measures are not taken falling from tall trees can cause serious spinal injuries and even deaths; therefore people, particularly walnut farmers, are requested to adhere to the safety tips issued by the SEOC, ” said Ali.

Dr. Khursheed also suggested making walnut climbers aware of spinal cord injuries and providing them with adequate safety measures. For example, he said that the agriculture and horticulture departments could provide a net which can be tied to four posts beneath the walnut tree so that if a climber falls, he may safely land on the net.

“A net can be replaced by a thick mattress. Ladders which are used during fire-fighting can be used to assist in climbing. Also, a rope can be tied around the waist of the climber and levered around a thick branch of tree and the other end of the rope can be held by persons on the ground so that if the climber slips, he is at least held in the air. Besides, a centre where walnut climbers could be trained to climb safely is the need of the hour,” Dr. Khursheed said.