How Borewell Restoration Is Helping Farmers Repay Their Loans

Rainwater diverted directly to deeper aquifers can reboot defunct borewells but a good design is essential to its efficiency. 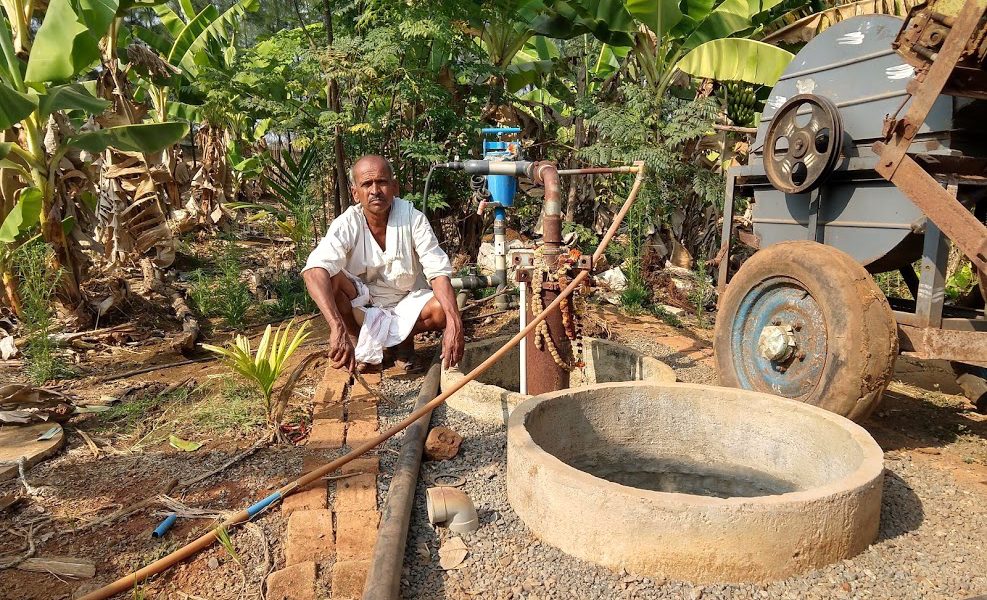 The rain-fed farm yielded enough grain for R. Madappa to feed his family. During the dry season, he would migrate to nearby towns for daily-wage work.

When the technology to retrieve groundwater arrived in his native Vennonayakahalli village in Davanagere district of Karnataka, he hoped to make the best of it.

He got his first borewell in 1994. It reached 300 feet below ground but dried up within a year. He went for another one, going deeper, and then another and yet another. By 2003, he had sunk 11 borewells on 10 acres of his land, the deepest one going up to 800 feet down.

The long period of drought and over extraction of water in the region meant all of them had dried up in quick succession. This left 45-year-old Madappa with a debt of Rs 3.5 lakh, and thoughts of suicide.

“I got myself a life insurance with a cover of Rs 5 lakh, which would have helped my wife and three children after my death,” he said. “But better sense prevailed. I decided to sell half of my land instead, even if at a loss.”

Also read: The Desperation for Water

Mandappa used the money to repay his debt, but the dried borewells and failing crops were still a problem, and threatened a replay of misfortune.

He was then thinking of getting a new, deeper borewell when a chance encounter with another farmer alerted him to Devaraja Reddy, a scientist who had a way to make failed borewells work again. Reddy had been promoting an idea to recharge borewells by diverting rainwater to underground aquifers through the very bore pipe that pulled the water out.

The benefit of this technique, especially over traditional recharge methods like digging trenches and ponds, is that it has lower evaporation loss and a faster recharge rate. This is because the water is sent directly to the aquifer instead of slowly percolating through the soil.

But it has its flaws.

Groundwater is a complex natural resource trapped in various layers of rock, clay, sand and gravel. The shallow aquifer is the layer of water we mostly see in dug wells, and its level moves up or down according to the amount of rainfall.

The deep aquifers on the other hand, is the space between impenetrable rocks at greater depths. The water here may have taken several years to accumulate.

As agriculture and industrialisation become more intense, many parts of India are already facing water shortages, not to mention a lot of the water available is contaminated. So they are using borewells to access – and soon drain – the deep aquifers.

In 2013, there were 2.6 million deep tubewells and/or borewells (deeper than 70 m) in India irrigating 12.68 million ha of land, according to the fifth Census of Minor Irrigation Schemes. However, around 12% of these borewells had either dried up or supplied less water than expected. 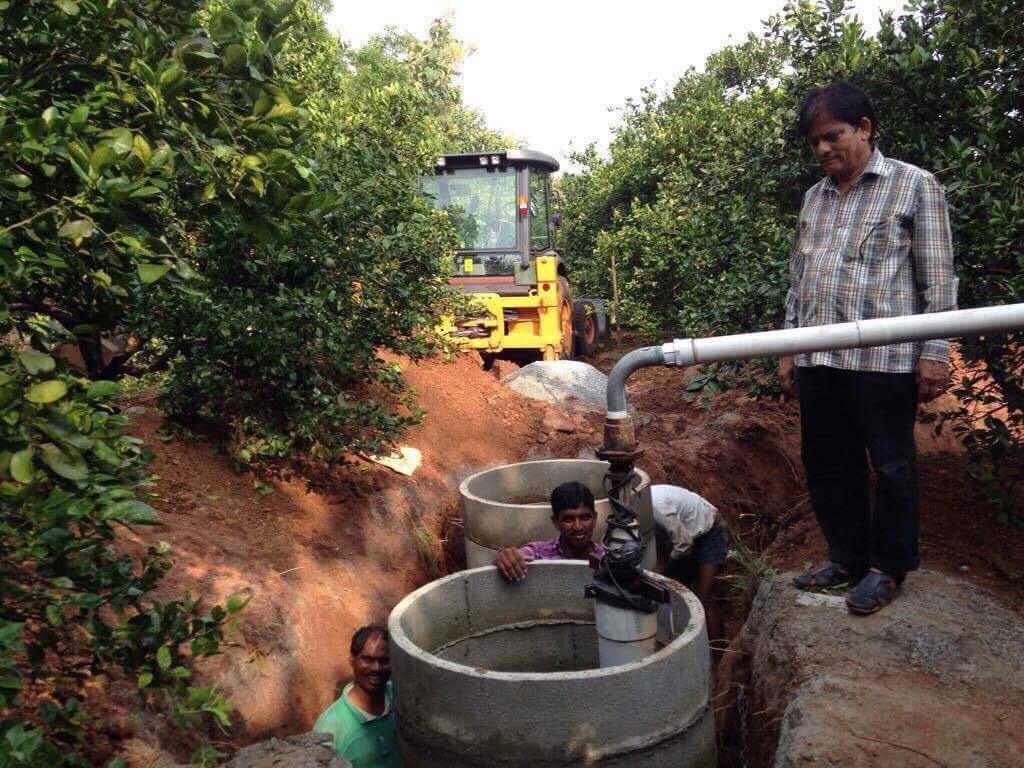 The situation is more serious in the hard-rock region of peninsular India – underlying Andhra Pradesh, Telangana, Maharashtra, Karnataka and Tamil Nadu – where the failure rate, 23%, was almost double the national average. Telangana and Andhra Pradesh were the most affected with failure rates of 34% and 31% borewells, respectively. Maharashtra suffered with 20%.

Individual farmers own around 80% of irrigation borewells in the country. “The absence of any other form of irrigation forces farmers to rely on groundwater more than ever,” said Sikandar Meeranaik, chief executive officer of the Sankalpa Rural Development Society, a non-profit organisation in Hubli that promotes borewell recharging.

“Expenditure on borewells is one of the reasons for mounting farm debt. This is why artificial recharge of aquifers is essential.”

Also read: The Lives of the Salt Harvesters of Thoothukudi in a Warming World

For Madappa, a single revived borewell now sustains multiple crops on his farm. “The increase in income helped me buy another three acres,” he said.

Borewell recharging systems came in different designs but all of them have a pond dug near the bore to collect rainwater. A pit connected to the pond is dug around the bore pipe and filled with local material, including big and small boulders, pebbles and sand. Small holes are drilled into the bore’s casing pipe and a nylon mesh filter and a sand filter cover the pipe.

When it rains, water from the catchment area fills the pond and goes to the pit, and enters the casing pipe through the filters. The recharge time varies with location.

“Good rains above 20 mm is needed in the catchment area,” Reddy told The Wire. “If there is 100 mm of rain in a month, the aquifer will be in a good state. In areas where several borewells are tapping the aquifer, it may take longer. In such cases, we try to convince the whole community to opt for recharge.” 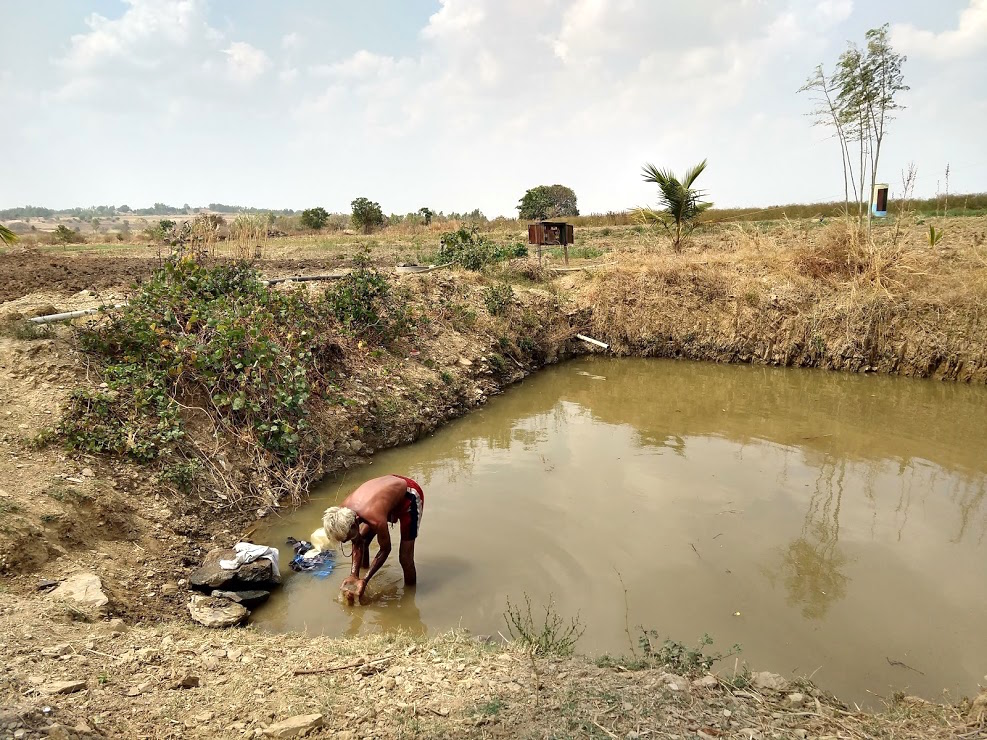 The rainwater harvesting pond can also be used by animals and people. Credit: Manu Moudgil

However, the technique can fail if not designed properly.

“There have been instances where farmers have done no filtration or used poor filters, which resulted in silt entering the casing pipe and choking the aquifer or the well,” Reddy explained.

“Another criterion is location. In dry regions like Vidarbha, borewells should be downstream of at least two acres of catchment area so that enough rainwater flows into the harvesting pond and then into the bore. Improper location is the reason why only 80% of borewells can be recharged.”

While banks are known to extend loans to farmers for acquiring and deepening borewells, the Pragati Krishna Gramin Bank, a government-run institution in Karnataka, also helps farmers build recharge structures. Bank officials have also been recommending the technique to all farmers whose borewells failed after a few years and who are now seeking bigger loans.

“So far, around 2,000 farmers have taken loans of upto Rs 25,000 from us to get their borewells recharged,” said Shivakumar H., a manager at the Kurubarahalli branch of the bank. “We hold awareness programmes with farmers’ clubs to spread the message further.”

Also read: ‘This Season, at Least I Come Back With Water After Eight Hours…’

The Government of Karnataka has also recharged thousands of borewells and supplied drinking water to villages combining the work needed to set them up with labour organised by the Mahatma Gandhi National Rural Employment Guarantee Scheme.

The enhanced availability of water, however, can also work against irrigation efficiency. This happens when farmers expand the area under cultivation or grow water-guzzling crops, thus negating the gains made through recharge.

“Deep aquifer recharging should be the last resort because if you are telling the farmer that more water is available, he will use it to maximise benefits,” Vishwanath Srikantaiah, an expert in rainwater-harvesting structures, said. “The priority should be to enhance soil moisture and promote crops suitable to the local climate and soil. If required, shallow aquifers can be recharged.”

Both Meeranaik and Reddy claim they advise farmers about reorienting their crop patterns towards using less water. The practice, however, may differ from theory. Many of those farmers who opted to recharge their borewells also opted to plant paddy and areca nut. A few have also taken neighbouring farm-lands on lease to make the best of enhanced water availability.

Manu Moudgil is an independent journalist. He tweets at @manumoudgil. Reporting for this story was supported by the WaterAid India ‘WASH Matters 2018’ Media Fellowship Programme.