By not including tenant farmers in ambit of its schemes, the state government is leaving marginalised farmers in the lurch. 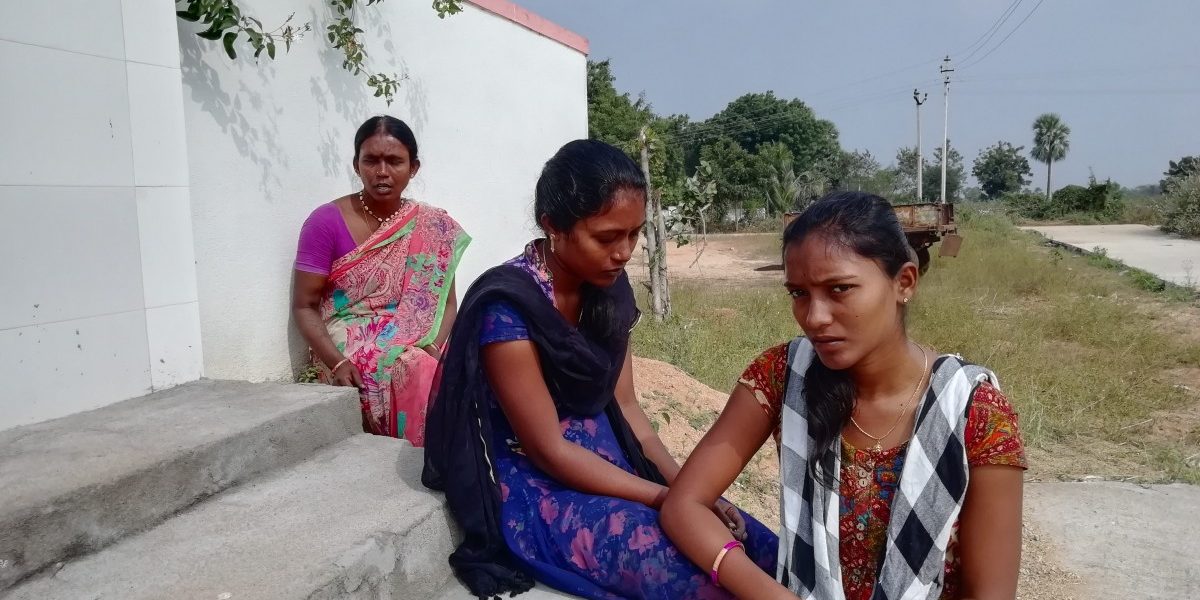 B. Saidamma with her daughters. Her husband B. Bhadrayya died by suicide in 2015. He was a tenant farmer who cultivated cotton on 10 acres of land.

Suryapet (Telangana): Remembering how her husband died five years ago, and the hardships she has faced since, 45-year-old B. Saidamma is reduced to tears. Her husband, B. Bhadrayya from Bhaktalapuram village in Penpahad mandal of Telangana’s Suryapet district, died by suicide after he was unable to pay back a Rs 5 lakh debt.

Bhadrayya had taken the loan to pay for paddy cultivation on the 10 cents (a tenth of an acre) of land the family owns, and another ten acres taken on rent. His family isn’t the only one who is facing this crisis – their situation mirrors the distress seen by farm families who are left to fend for themselves.

Since the Centre appears to believe that denying access to information will hide all its failures, the number of farmers’ suicides in Telangana was unknown for a long time.

The Telangana government identified farmer suicides between June 2, 2014 to July 15, 2018. But ever since the state government announced Rythu Bima scheme on August 15, 2018 and started giving Rs 5 lakh to the families of farmers who die, the government has failed to record suicides. The compensation is supposed to be provided irrespective of the reason for the death – and because of this, the government has said, it no longer needs to take note of the cause of death. Bhukya Lalamma, wife of Bhukya Utla who was a tenant cotton farmer on 4 acres of land and died after being unable to pay back a debt of Rs 3 lakh in 2017.

“This is wrong on several fronts. It denies the government genuine information on the number of suicides by farmers owing to agrarian distress. This further removes the chance for the government to chalk out policies that may stop further such suicides,” says B. Kondal Reddy, secretary of the Rythu Swarajya Vedika, a farmers’ organisation.

“Vexed after making rounds of officials for years, women of Nalgonda district along with the Human Rights Forum and Rythu Swarajya Vedika (RSV) filed a petition in the high court of Telangana seeking compensation of Rs 6 lakh to 243 families. Their payments were kept pending after being okayed by the government machinery. The families were paid after the court censured the officials,” Kondal said.

Of the 493 families awaiting compensation, only 243 have received approval from the government after this process.

In Mancherial district, none of the seven families awaiting compensation have received it in the past two years. In Yadadri Bhuvanagiri district, of the 18 families only three have got compensation. Suryapet district saw 50 farmers’ suicides in the period. Bhupalpally witnessed 198 suicides between June 1, 2014 and January 2, 2020. Right to Information applications to the other district crime records bureaus are yet to be answered.

Pitfalls in the Rythu Bima scheme

A pathbreaking scheme launched for families in which a farmer had died by suicide, the Rythu Bima scheme has helped 18,000 families between August 15, 2018 and August 15, 2019.

Activists, however, say the scheme needs to be tweaked and widened. As the scheme recognises only those between 18 and 59 years of age with a land title in their name as farmers, it excludes tenant farmers and other family members who end their lives due to farm distress. In Telangana, traditionally land remains in the name of the family head until their death.

Also read: Why Women Farmers in Telangana Are Taking Their Own Lives

The scheme, thus, was not useful for the family of K. Lakshmi, a resident of K.T. Annaram village in Suryapet district. Her husband, K. Janardhan Reddy, was 60 years old when he ended his life on February 11, 2019. The family’s three acres of land are in Lakshmi’s name. At the time of Janardhan’s death, their debts amounted to Rs 10 lakh.

“The government hasn’t actually withdrawn the Rs 6 lakh scheme given to suicide-hit farmer families. If they give Rs 5 lakhs through Rythu Bima, they can give the remaining Rs 1 lakh in addition to it. But the Telangana government is not tweaking the rules. We have asked them to consider the family as a unit while granting compensation to families,” said Kiran Vissa from the RSV, who is in the All India Kisan Sangharsh Coordination Committee.

Farmers in India tend to go on working beyond the age of 60. To put a cut-off age for farmer suicides, then, may not make sense.

The Rythu Bima scheme was launched by the state government in alliance with the Life Insurance Corporation (LIC). The state government pays Rs 2,250 per person insured and issues a bond worth Rs 5 lakh. This should be extended, taking the whole family as one unit.

After procedural lapses by the revenue administration, Angoth Swarajyam’s family in Ramapuram thanda, Mothey mandal, Suryapet was denied compensation. His wife, A. Lakshmi, has received no money even though Swarajyam, who died by suicide, had an LIC policy. Swarajyam had three acres of land in his name and was tilling another 10 acres as a tenant. Angoth Lakshmi holding a photo of her husband, Angoth Swarajyam, with her grandson. Swarjyam ended his life in 2017. The family also lost their son-in-law to suicide.

Agricultural experts have been saying for years that tenant farmers need to be recognised and policies formulated to protect them. But no credible enumeration has been done by the state government till date. This despite the fact that in a recent report, the State Bank of India said 70% of the land in the country is under being cultivated by tenant farmers.

The Socio Economic Caste Census of 2011 had found that 50% of rural families don’t own any land. The increase in land prices has made buying land prohibitive. The non-implementation of land reforms has left the landless with no option but to take land as tenants.

With chief minister K. Chandrashekhar Rao repeating his aversion to recognising tenant farmers, their problems have only increased. All of the state’s schemes are aimed at landowners, leaving tenant farmers in the lurch.

According to RSV, the Central government had estimated that 13% of Indian farmers are tenant farmers. Telangana appears to think it has more tenant farmers than the national average – when the government wanted to distribute tenancy cards, it set a target of 13 lakh cards (whereas 13% of Telangana’s farming population would be approximately 7.5 lakh).

While landowners can get crop loans from banks at lower interest rates, tenant farmers have to rely on private loans. Crop insurance, distributed in case of crop failure, also goes to the land owner. It is tied up to crop loans. Credit is linked to ownership. Unofficial estimates suggest that 80% of farmer suicides are by tenant farmers. A visit to 14 farm families in Suryapet district showed most of those who died while owning small pieces of land had also taken more land on rent.

Landowners have over the years left farming, due to falling returns, and shifted to urban areas in search of greener pastures. Tenants are supposed to be given one-sixth of the produce, according to the Act, but there is no mechanism to implement that.

After the scheme helped Rao win the 2018 assembly elections in Telangana, the BJP-ruled Centre rolled out its own version of it as PM Kisan before the 2019 general elections. Activists estimate that 50% of the amount under this head goes to the big landowners and not small and medium farmers, and no official numbers on this are available. In the absence of formal tenancy agreements, landowners are pocketing money under the scheme. It’s also leaving out tribal farmers, who till ‘forest lands’ and don’t have titles.

Also read: The Farm Widow: A Suicide and a Life Left Behind

The government seems to now be limiting payments to only 49.03 lakh farmers who were paid in the rabi of 2018. At the now increased rate of Rs 5,000 per acre, if all the 59 lakh farmers are to be paid, it will require Rs 6,150 crore, the agricultural department has estimated, according to local newspapers.

Even the Central government’s PM Kisan Samman Nidhi payments for Telangana, according to the scheme’s website, have not been consistent and the number of beneficiaries has reduced. The scheme identified 35,02,384 beneficiaries but gave money to 34,80,436 in the first instalment, 34,09,105 in the second, 31,63,694 in the third and 22,57,666 farmers in the fourth instalment.

The government had announced a loan waiver of Rs 1,00,000 for farmers in 2014. Under this, all crop loans and agricultural gold loans used for crops were considered. As per the government’s socio-economic outlook for 2019, it has so far waived Rs 16,124.37 crore for 35.30 lakh farmers of their outstanding crop loans.

Farm activists say that blanket loan waivers are not useful, as the money doesn’t accrue to the real needy farmers. A promise to waive another Rs 1,00,000 was again made just ahead of the Telangana assembly polls. December 11, 2018 was earmarked as the cut-off date for the scheme, but no payments have been made until now though Rs 6,000 crore was allocated in the last budget. M. Kalamma, wife of M. Krishnamurthy, from Tekumatla in Suryapet district is repaying a loan of Rs 7 lakh after her husband died in 2016. Her husband, a BSNL contract employee, lost his job as landlines phones became redundant.

The SBI, in its recent report on loan waivers across the country, has calculated that a whopping Rs 3.14 lakh crore has been waived. This includes the Rs 24,000 crore announced by the Andhra Pradesh government and Rs 17,000 crore by the Telangana government. It further says that the waivers have mostly been on paper and have only been honoured in 60% of cases. It adds that the waivers have mostly benefitted landowners and not tenant farmers.

With the Centre unwilling to implement the Swaminathan Committee recommendations, farmers have not been receiving the rights minimum support price. Input costs have been increasing in Telangana, but the state government has failed to send the information to the CACP (Centre for Agriculture Costs and Prices). Though the state grows 14% of the cotton in the country in over 40% of the normally cropped 43,34,487 hectares of agricultural land, it has failed to provide inputs to the CACP, the central agency which fixes the MSP for crops.

Ravi Kanneganti, convenor of the Telangana Rythu Joint Action Committee, says that the state should have provided a bonus price to the farmers instead of paying ‘farmers’ who do not live in villages and have very little to do with the profession under Rythu Bandhu scheme.

A study by the RSV concludes that the Rs 87,500 scale of finance provided per hectare is the main reason for the extensive cultivation of cotton. The denuded forests seem to have added another dimension to farmers’ problems. The damage caused to food crops by monkeys and forest pigs has forced them to stick to cotton. The crop survives low rainfall and guarantees a minimum yield. There are also extensive facilities available to market cotton, but not other crops.

To help distressed farmers, the state government constituted a debt relief tribunal. The commission, for which a law was passed three years ago, had been in cold storage but has been revived now. The delay makes the seriousness of the state government evident, with two of the five commission members’ posts still remaining vacant. Farmers with landholdings below five acres of dry land or 2.5 acres of wet land come into its ambit.

“We have powers to call on the revenue and agriculture departments to help us in assessing the distress of individual farmers who approach us for reprieve. We are calling the insurance companies and the SLBC (State Level Bankers Committee) to assess the situation. Our aim is to stop suicides,” says P. Srihari Rao, member of the debt relief commission.

Preventing farmer suicides needs a multi-pronged approach. The days to come will show if the Telangana government is able to make a difference.

All photos by G. Ram Mohan.