Farmers from far and wide, spanning religions, arrived at Tikunia village for the Sikh ritual of antim ardas. 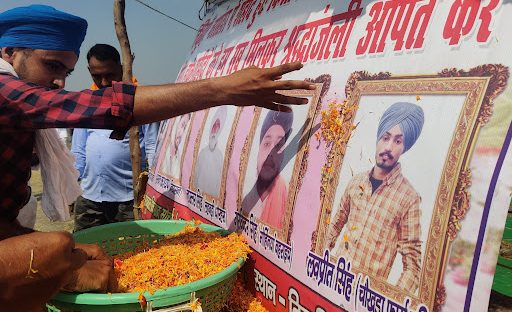 A farmer pays his respects to the deceased. Photo: Ismat Ara/The Wire

Tikunia, Lakhimpur Kheri: “We will ensure that the dreams of our martyrs are fulfilled. Those who have lost their lives in the farmers’ movement will stay alive in our memories, forever.”

With these words, the last prayers or “antim ardas” for the four deceased farmers and reporter were held on Tuesday, October 12, at Tikunia, a few kilometres away from the area in Lakhimpur Kheri where the violence had occurred on October 3.

Thousands of farmers had gathered to pay their respects to the deceased farmers, referring to them as martyrs who had died for the cause of the farmers’ movement.

Farmer leaders, under the banner of the Samyukt Kisan Morcha (SKM), had issued a deadline to the Uttar Pradesh government to meet their demands. Their demand – that the main accused Ashish Mishra, Minister of State for Home Ajay Mishra’s son, be arrested, has been met now that a Special Investigation Team has arrested him. 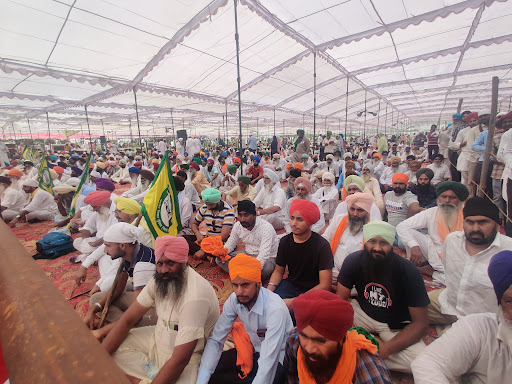 Mourners at the tent at the antim ardas. Photo: Ismat Ara/The Wire

Farmers are also demanding Ajay Mishra’s resignation. “But, of course, our main demand has always been that the three farm laws should be taken back by the Centre,” a farmer said.

Bharatiya Kisan Union’s (BKU) Rakesh Tikait also announced today that the farmers would start an agitation if Ajay Mishra is not dismissed and arrested. 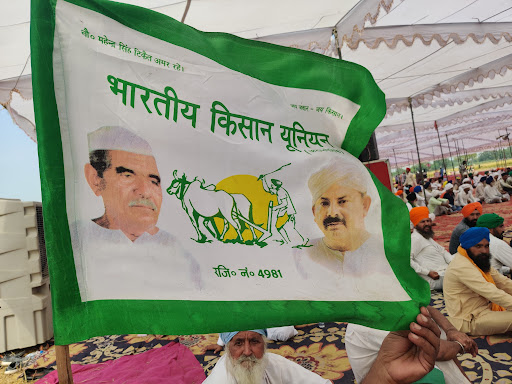 Arrangements were made for the Sikh ritual by putting up huge tents that could accommodate over 10,000 people at once. Amarpreet Singh, a local farmer who was volunteering at the antim ardas told The Wire that the farmers had been worried that Bharatiya Janata Party workers may try to disrupt their event.

“Because of this, at least 2,000 volunteers are spread across the grounds to ensure safety. At least 200 of them are part of a committee and at least 25 are coordinating with the help of walkie talkies,” he said.

He added that he was also there during the October 3 protest, which was peaceful before “BJP workers suddenly interrupted it by ramming their cars into protesters.” 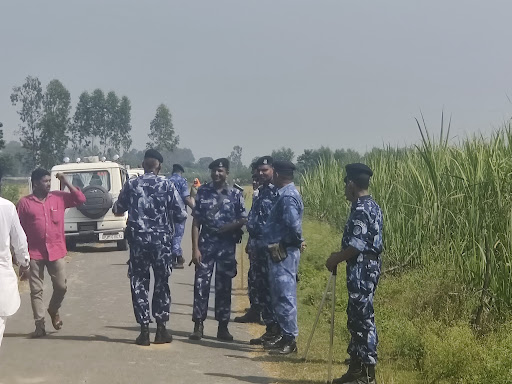 There were also announcements made from the stage. “There should be no untoward incident today, we must ensure it. If anything is forced on us, then the administration will be to blame,” a man said on the microphone, adding that the farmers will cooperate with the administration as long as they do not stop any farmer from coming in and do not allow any “problematic elements” inside. 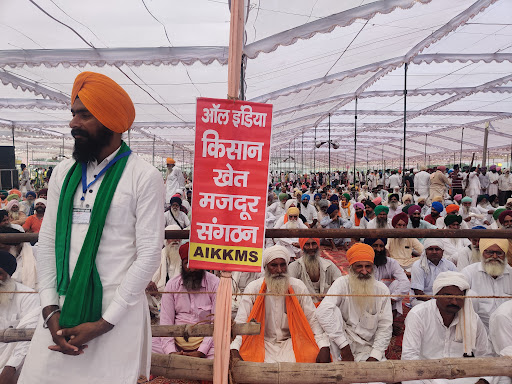 Among farmers who came from nearby villages was Barkat Ali, a 50-year-old from San Kheda, who grows rice and sugarcane. He said that his village is a Muslim dominated one but a majority of people will be joining the Sikh ceremony today to support the cause of farmers.

Mohammad Haneef, 45, from another village nearby said that “all farmers are united in this struggle.”

The antim ardas was also attended by young children. A 12-year-old boy, Luvjeet Singh from Nighasan had joined because his mother suggested it. “She could not come, so I came instead. She asked me to support the cause,” he told The Wire.

Karan Pal Singh was another young boy. He is in Class 4 and came with his father to “support the movement”.

The Guru Granth Sahib was decorated near the stage and family members of the deceased farmers as well as the reporter sat close by. 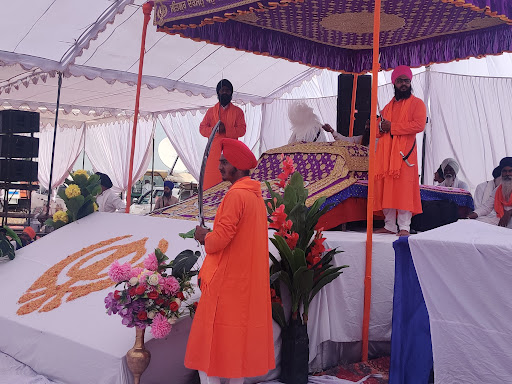 The stage at the antim ardas. Photo: Ismat Ara/The Wire 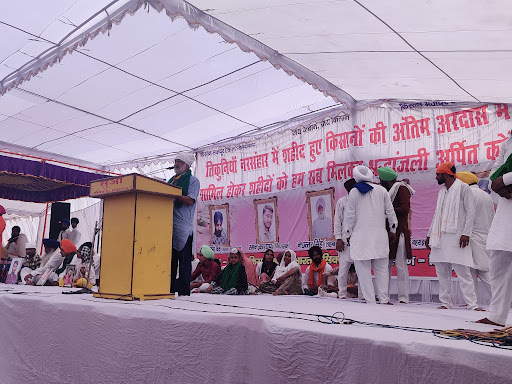 The stage at the antim ardas. Photo: Ismat Ara/The Wire

Huge posters with the photos of the deceased were also put up across the grounds and people stopped to pay their respects. 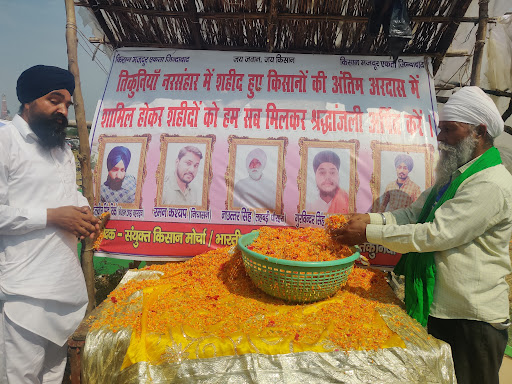 Even though an earlier announcement specified that no political leaders were invited on the stage, Congress General Secretary Priyanka Gandhi Vadra and Rashtriya Lok Dal’s Jayant Chaudhary joined later in the day to pay respects. 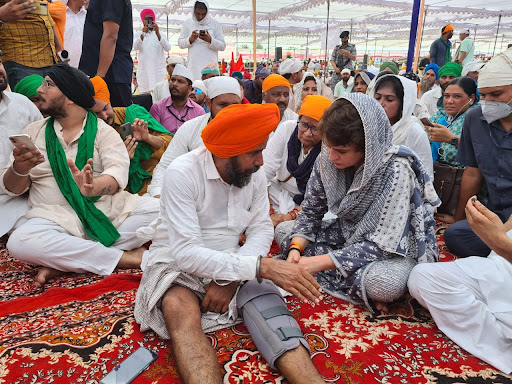 Among a few hundred women who joined the ceremony was Reena. She is associated with the Congress party locally and brought along a group of women from her village in Lakhimpur Kheri.

“We are mothers too, so we have come to share the pain of the mothers who have lost their children. Two of the victims were 19-20 years old, and had their entire lives ahead of them,” she said. 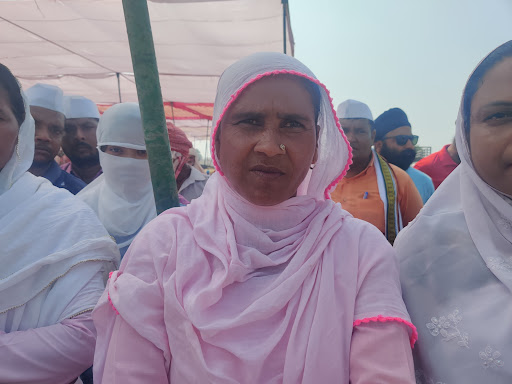 A group of women had joined the ceremony. Photo: Ismat Ara/The Wire

The ardas started at around 11 am, but farmers had begun coming in since Monday night, many of them having travelled long stretches. The antim ardas saw participation of farmers from Punjab, Haryana, Uttarakhand and faraway regions of Uttar Pradesh.

Amarjeet Singh, a farmer from Moga in Punjab, has been actively protesting the three farm Acts that he refers to as “black laws.”

Last night, he and 150 other farmers arrived in Lakhimpur Kheri by two buses all the way from Tikri border, where they had been protesting for the past 10 months. The journey took them roughly 15 hours. 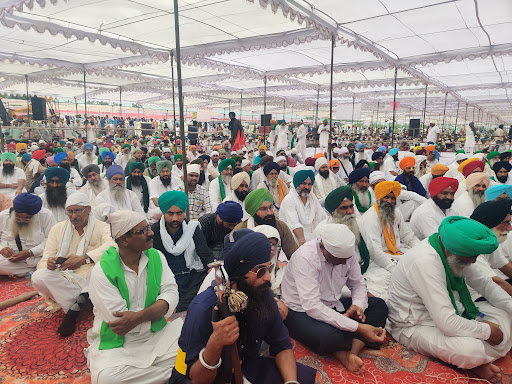 “Farmers from many districts in Punjab such as Sangrur, Mansa and Bhatinda have come here today. As you have seen, we have cleared BJP from Punjab, and even in Haryana the CM is too scared to come to his own home district because of our protests. We want to see this change in UP too,” he said, referring to the upcoming assembly polls in Uttar Pradesh.

He said that upon entering Uttar Pradesh, the kind of treatment that have received from people is indicative of the support that the farmers’ movement has gained in the state.

“They welcomed us very nicely. Everywhere people asked us if we want water and food. People respect farmers, as we grow food,” he said. 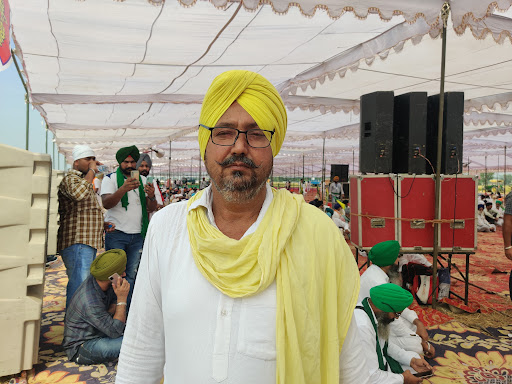 He added that while theirs was a “long fight,” it is important to make efforts as the next generation of farmers will otherwise suffer.

Balwan Singh, a farmer from Haryana’s Sonepat also arrived at Lakhimpur Kheri the night before to support the farmers in Uttar Pradesh.

“We have suffered a lot in the last 10 months of our protest. We have lost people, suffered bad weather, we have been tortured by police, tried by the media, even called Khalistanis. Here, the BJP workers thought that killing our brothers in this way will scare us. But we will not back down. In fact, they have added ghee in the fire by doing this,” he said. 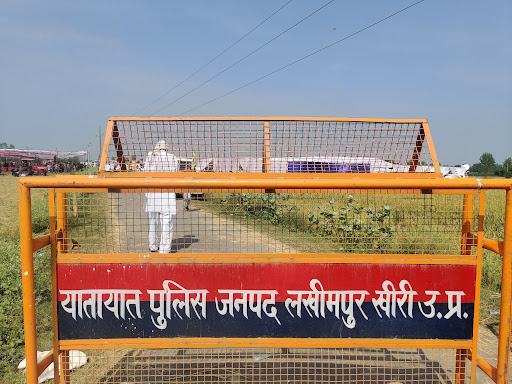 A police barricade near the tent. Photo: Ismat Ara/The Wire

Manjeet Singh, who has travelled from Uttar Pradesh’s Shahjahanpur to reach Lakhimpur Kheri said that he had voted for the BJP in the previous election as he had been “fooled” by promises of development.

“Instead, we have been cheated very badly. The government is failing farmers by not giving them what they deserve in terms of rates and dues. Now they are oppressing them by crushing our children under their cars. This government should be ashamed of itself,” he said.

Srikara Jatav, another farmer from Shahjahanpur echoed him. “We will vote for whoever candidate we think is capable of defeating the BJP, that is the only criteria now,” he said.