Calls Grow for Reevaluating GM Mustard, Release of Data – As Do Protests

The safety review put out in the public domain has stoked skepticism in some quarters. Scientists want the government to publish the primary data and not just a review document. 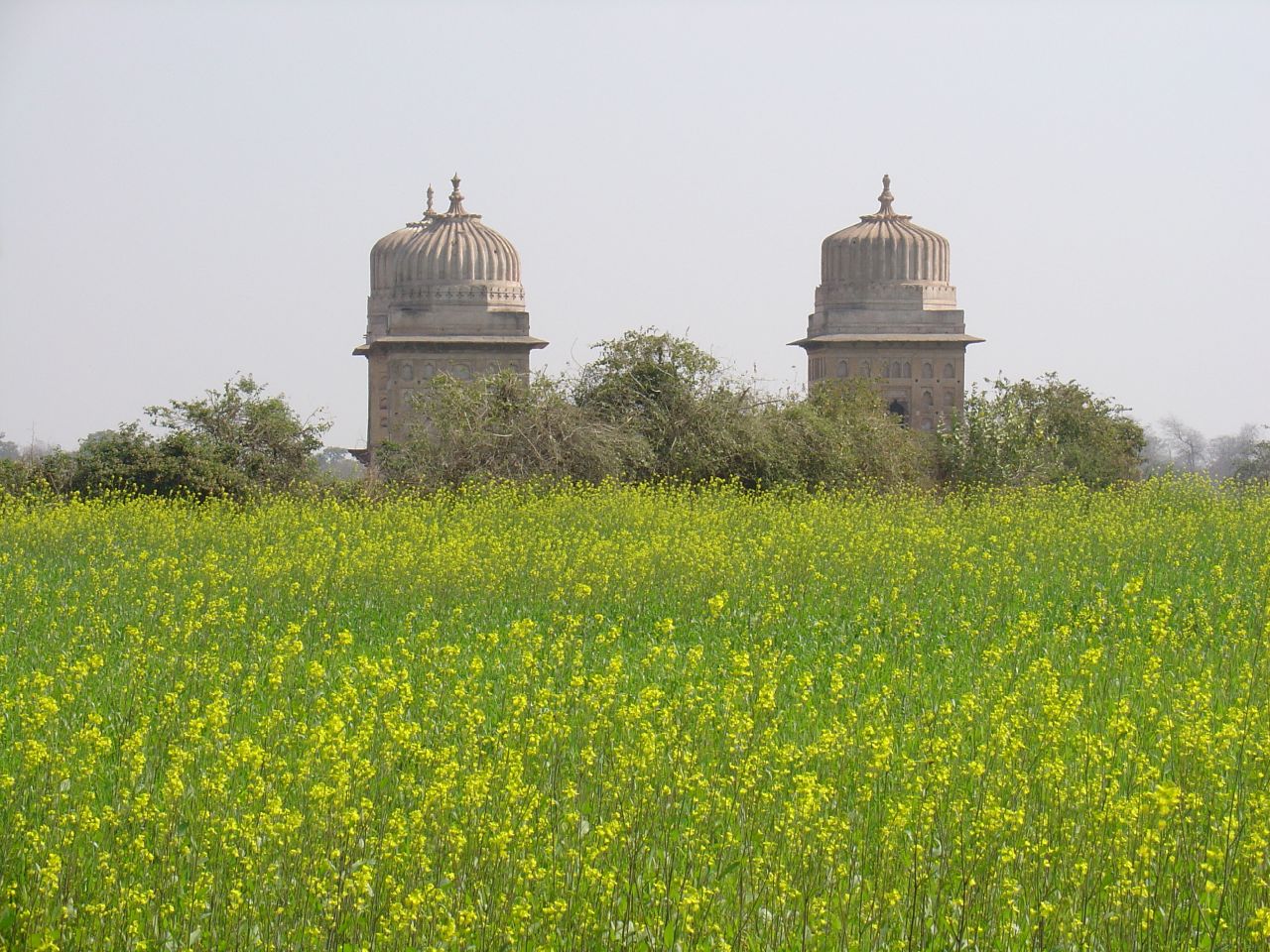 A mustard field with a temple in the background. Credit: amanderson/Flickr, CC BY 2.0

New Delhi: Hundreds of farmers and activists gathered at Janta Mantar today to protest against genetically modified (GM) mustard. Their coming together coincided with the Supreme Court’s hearing a petition filed by the environmentalist Aruna Rodrigues seeking a ban on open field trials and the commercial release of GM mustard.

By noon, farmers from Bihar, Gujarat and Madhya Pradesh had already gathered, wearing placards and shouting “GM mustard nahin chahiye” (We don’t want GM mustard) in what has been described as a sarson satygraha (Hindi for ‘peaceful struggle for mustard’) by activists and environmentalists.

They were joined by protestors from 20 states and representing more than 25 large national organisations, networks, alliances and campaign movements. These included the National Alliance for People’s Movement (NAPM), organic farmers’ associations and federations and even the right-wing Swadeshi Jagaran Manch and the Bhartiya Kisan Sangh.

India’s GM mustard was developed by a team of geneticists headed by former Delhi University vice-chancellor Deepak Pental. Mustard is a self-pollinating crop, which means it is difficult to produce hybrids that typically possess their ‘hybrid vigour’ – the tendency of crossbreeds to be superior to either parent plant in terms of yield.

Pental’s team tried to develop a hybrid between Indian and European varieties of mustard to increase the yield. To overcome the problem of self-pollination, his team introduced the barnase gene isolated from a soil bacterium called Bacillus amyloliquefaciens, which codes for a protein that makes a plant male-sterile.

The scientists next crossed the male-sterile mustard with a plant with two ‘restorer’ genes named barstar, also from the same bacterium, and bar, originally produced from a Streptomyces species. The two genes block barnase’s expression. As a result, the higher-yielding hybrid is not male-sterile anymore. Additionally, bar genes also confer tolerance to a herbicide – manufactured, incidentally, by the company Bayer – in the crop. The three genes are already present in Canada’s GM rapeseed, which is a relative of mustard and whose oil is used in Australia, Canada, the US as well as India.

Pental has claimed that his GM mustard has 25% greater yield compared to popular varieties and would cut India’s imports of canola oil. Edible oil imports amounted to 12.7 million tons in 2014-15, and canola oil imports cost India Rs 65,000 crore a year.

A biosafety review, released by the Genetic Engineering Approval committee (GEAC) in September, found the mustard to be safe. The review said it found no “measurable risk for sustained use of the technology”, although it did also advise monitoring its impact on honeybees. The GEAC next put up the review for public comments, whose deadline ended on October 5.

Officials of the department of biotechnology have pointed out that, mindful of the people’s fears and misconceptions over GM crops, scientists have put the safety review in public domain. This was unlike the case of Monsanto’s GM cotton, the only GM crop to be approved for commercial cultivation so far in India, in 2002. Then, the safety data was released long after the crop’s commercial use had been approved.

But far from allaying fears, the safety review has stoked skepticism in some quarters. Pushpa Mitra Bhargava, founding director of the Hyderabad-based Centre for Cellular and Molecular Biology (CCMB) and chair of the special committee appointed by the Supreme Court to look into GM crops, told The Wire that the government should put the primary data, and not just a review document, in the public domain.

More to the point, he added that there was no evidence of scientists having conducted detailed transcriptome analysis (the information contained in the genes is transcribed into shorter RNA molecules that act as messengers and convey the information to cells to make proteins) or proteomic analysis (the set of proteins that the genes have coded for). However, Pental countered saying that the oil from the GM mustard does not contain any protein in the first place – as well as that the biosafety of GM rapeseed has not been challenged even after 10 years.

At the same time, Bhargava asserted that the safety of GM crops has not been conclusively globally proved due to huge data flaws.

Kavita Kuruganti, founder of the Alliance for Sustainable and Holistic Agriculture (ASHA), New Delhi, said, “The benefits claims are unverified and the risks are under-assessed.” The yields of the new mustard should also be compared with those of mustard hybrids already available in the market for the past nine years, she added. According to her, India’s mustard production is low because farmers do not find it to be a remunerative crop. “GM technology is not the solution to the problem.”

Meanwhile, Rodrigues’ petition in the Supreme Court alleges that GM mustard has not been tested according to established norms. As V. Shivshankar reported for The Wire, her petition also seeks a 10-year moratorium on the cultivation of GM mustard. Mukul Rohatgi, the Attorney General, assured the Supreme Court that GM mustard would not be cultivated without the verdict, but also that curbs on field trials would hamper the country’s public-funded crop research programmes.

It is the farmers who must give the final verdict on whether a crop works for them or not, pointed out Pental. “Farmers prefer to see for themselves in the field and will not be guided by my or an NGO’s views. So let them see for themselves and decide,” he said.