'The Food You Throw Away Impacts the Weather Outside Your Window'

Three million people face famine due to a combination of inequality, conflict, the pandemic and climate change – yet food security scarcely found mention at COP26. Glasgow: Food insecurity is worsening across the developing world. While the number of undernourished declined steadily in the first decade of the 21st century, there has been a sharp uptick in the last few years, aided by, among other factors, the COVID-19 pandemic.

Today, more than 800 million are forced to sleep hungry at night. Some 3 million face famine due to a combination of inequality, conflict, the pandemic and climate change. However, food security scarcely found mention at discussions at COP26, the global climate summit that ends today.

On the side-lines of the conference, in Glasgow, Kabir Agarwal spoke on behalf of The Wire Science to Gernot Laganda, chief of climate and disaster risk reduction programmes at the UN World Food Programme. Excerpts from the interview are presented below, with the questions in bold.

For the last few years, particularly since 2015, the number of food-insecure people in the world has been increasing instead of reducing. Why is this happening?

So the trend reversal in the hunger numbers, as you rightly say, started around 2015. Conflict and climate have been the big drivers. And then last year we also had the economic impacts of COVID-19, where we saw disruptions in the supply chain due to lockdowns and that led to a rise in food prices.

COVID’s economic effect really came on top of an existing problem. But the speed at which the number of hungry people has increased in recent years is faster than at any time before, since the turn of the century. Right now, we have 45 million people around the world who are facing a food emergency. That is one stage before a famine.

Forty-five million people are on the brink of starvation in 43 countries. It’s a very, very worrying picture. And with climate change, this situation is only likely to worsen…

Exactly. If you think it is bad now, you know, with a warming climate, this trend is only going to [worsen], because we have already seen that the number of climate extremes has more than doubled over the past 30 years or so. And we will have to respond to more and more impacts, and more and more lives will be in danger due to climate extremes.

This is a big problem for the humanitarian system because we are already on the brink.

Coming back to what you said about the rapidly increasing speed at which hunger is growing across the world – is that already a consequence of climate change?

Yes, the speed is really picking up very, very quickly. I would say there are three factors.

The first one is of course you have more frequent and more extreme weather events – more storms, more droughts, more floods. We also have new types of disasters that did not hit very hard in the past, like heat waves and wildfires.

The second factor is that there are more creeping climate problems like changes in seasons. For example, the monsoon doesn’t start when it should. It doesn’t end when it should. You have a little bit of rainfall and then a long dry spell. Or you have all the rain that should normally fall in two months come down in one afternoon, washing all the top soil away.

You see more pest infestations in crops, more salinity in soil and groundwater and more erosion. And that’s not [acute]; it’s more like a creeping problem. But it makes families more vulnerable.

So when you have gone through, say, two years of failed harvests because the seasonality has changed, then suddenly you are very vulnerable even if the food prices go up or if you have a seasonal flood. It doesn’t need to be a once in a lifetime event – just a small event can already put you in a food crisis.

So you’re talking about a seven-fold increase in a world that is around 2º C warmer or so.

One of the worst hunger situations in the world is currently in Afghanistan, where more than half the population faces acute food insecurity. And the situation there perhaps speaks to your point about the interaction between climate change and conflict, as it is in many ways a combination of both these factors.

In Afghanistan right now, you have 25 out of 34 provinces facing drought conditions. And, you know, the international community sees Afghanistan more like a political conflict situation. But for us [at the World Food Programme], it’s a compounding situation.

You have a compound disaster with political tensions, conflict and climate. On top of that, most people in remote or rural areas are hit by drought. So to our minds, this is not a very straightforward case of saying this is a political or a conflict-induced hunger situation.

We have climate change and then we have conflict that overlaps and puts people into a very difficult situation. Because when you are in a conflict area, you have no capacity to manage the problems that arise due to climate change. And if you get displaced, you could get in contact with other groups, and there might be more potential for conflict.

So that is the relationship between climate change and conflict that can put people in very vulnerable conditions.

Severe food insecurity mostly impacts the poorer nations. Can you explain why it is more difficult for poorer countries to deal with the impacts of, say, a two-year drought than it is for Australia or the US?

There is also very often a lack of institutional capacity for things like early-warning systems or weather-information systems. Many developing countries are not equipped or not capable of providing timely, accurate, early warning information to farmers. So this institutional aspect needs strengthening.

So everyone puts the goods on the market at the same time. Then you get a very, very low price for your produce and you cannot really pull yourself out of poverty.

The vulnerability also exists because people are used to farming only a certain type of crop. They are not yet diversified enough to deal with changing conditions. 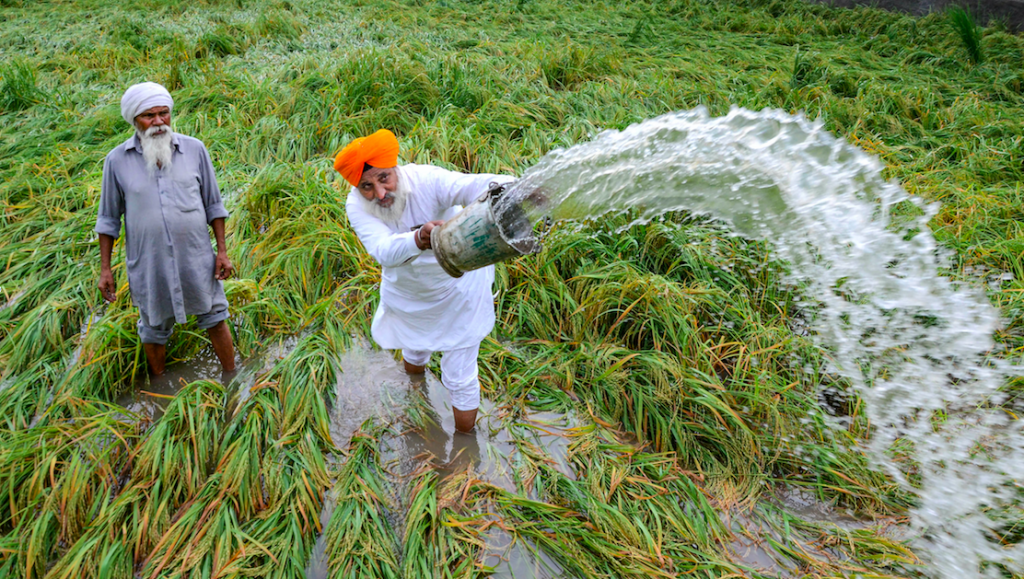 Farmers clear flood water from their paddy field at a village on the outskirts of Amritsar, September 10, 2021. Photo: PTI

So the small landholders are already vulnerable due to the situation that you described, and then we have weather events which make life more precarious for them. What are some of the coping strategies to deal with this situation?

Normally, when a climate extreme hits a smallholder household, they start to sell their tools, sell their livestock, and take the children out of school. But if the shock keeps hitting and hitting and hitting, and you have sold everything already, the only way left is to get support from outside – from your peers, your family or from humanitarian aid. Climate change is going to make that much more frequent.

Is the Paris Agreement equipped to deal with this problem?

The Paris Agreement is a very-long-term risk management strategy – by reducing the speed of global warming or limiting it to below 2º C. We are trying to avoid tipping points where, all of a sudden, the climate does things that no one has ever seen. So you want to avoid a tipping point scenario where all of a sudden we are at 4º or something.

Also read: What Are Tipping Points?

We have calculated that if the climate is 2º C warmer, 189 million more people will become food insecure. But if the climate warms by 4º, 1.8 billion more people will become food insecure. So this is not a linear trend; every 10th of a degree matters. Even at 1.1º C [of warming] right now, we’re in a place where, you know, one big event can have a massive impact.

Why don’t we hear more about food security at global summits such as COP26?

I think, for a long time, agriculture was a mitigation as well as an adaptation topic. I think that the COP [short for ‘Conference of the Parties’, of the UN Framework Convention on Climate Change] had difficulty putting it in a particular corner.

Agriculture is, on the one hand, a contributor to global warming. On the other hand, it’s a victim of global warming. [Emphases added.] So for a long time the question has been – how do you deal with agriculture?

I think the food systems aspect is vital because, to my mind, it has a really big potential. Food systems are not only about growing crops. They are about production, processing, storage, transport and consumption. There is an entire range of activities that food systems deal with.

And if you manage to transform the systems of the country, reducing food waste and post-harvest losses, diversifying production and strengthening access to clean energy throughout the entire chain, then you can make a big contribution to climate action. And if you invest in climate change adaptation of food systems, then food systems will become more resilient and will emit lower carbon.

So, potentially, there is a very virtuous relationship.

Do you see the effort to move in that direction being made here at COP26?

The World Food Programme has also made an effort to build that bridge from the food-system summit to the climate change summit, because we really believe that when you have resilient, low-carbon food systems, this is a big contribution to climate action.

And when climate action invests in more resilient and lower carbon food systems, you can get a big impact on mitigation as well as adaptation. Remember that food systems contribute a third of global greenhouse gas emissions. A delegate walks past a sign during the UN Climate Change Conference (COP26) in Glasgow, Scotland, November 11, 2021. Photo: Reuters/Yves Herman

Globally, about a third of the food produced is wasted. How big a problem is that?

Food waste in the developing world happens more in the post-harvest stage. People do not waste food. Here, it’s more of an issue with technologies after the harvest – the processing technologies, the storage technologies – which are not good enough. You lose a substantive part, sometimes up to a third of your harvest … in the processing, storage and transport stages.

In developed economies, most of the food is wasted on the plate, right in the fridge. People just throw it away even though the food has already made it into their households. So you really need to make people understand that the food that they throw away has a direct impact on the weather outside their window, because there is a link between food waste and global warming.