After Demonetisation, How About a Surgical Strike On India's Meagre Farming Incomes?

To say that 'agriculture' has failed to keep up with the growth that the country has witnessed in the last 15 years is a clever ploy to cover up the neglect that has kept farmers impoverished. 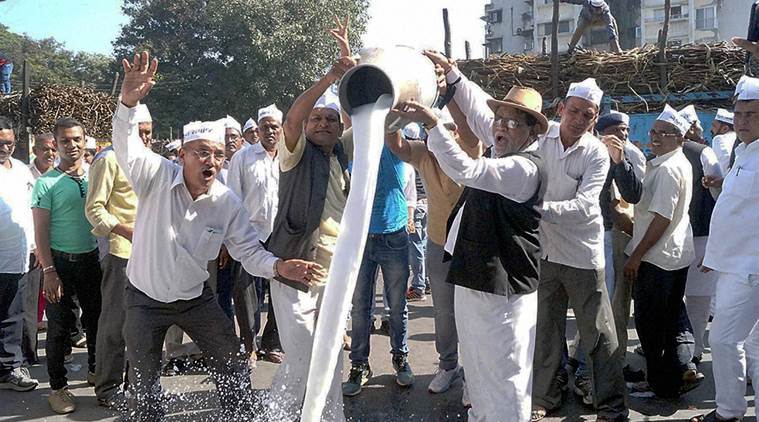 On New Year’s eve, when Prime Minister Narendra Modi tried to assuage the severe pain that demonetisation has inflicted on the agriculture sector, he was in a way acknowledging how courageously farmers had faced the blow. Despite the cash-crunch hitting where it hurts the most – bumper crops discarded and farm incomes dropping by 50 to 70% on an average – farmers have taken the hit rather quietly.

But that’s the way it has always been. A day after the Prime Minister’s address, the National Crime Record Bureau (NCRB) released its annual report. According to its latest estimates, 12,602 farmers had committed suicide in 2015, an increase of 2% over the death toll recorded in 2014. Between 1995 and 2015, a period of 21 years, more than 3.18 lakh farmers have committed suicide. With mounting indebtedness, poverty, increasing health expenses and other farming-related issues shown as the primary reasons, but without causing any uproar or political unrest, farmers have instead gone quietly to the gallows.

After two years of back-to-back drought, when farmers were expecting a normal monsoon to help them emerge out of a cycle of distress they had quietly borne, demonetisation struck. Call it shock therapy or a surgical strike, but the blow it inflicted on the livelihood security of millions of farmers has been crippling. Pictures of farmers dumping tomatoes/potatoes onto the streets; feeding unharvested crop to cattle; farmers giving vegetables free to the consumers; dairy workers waiting for their daily wages; farm workers sitting idle and so on are still fresh in our memory.

Old wine in a new bottle

The repackaging of various existing schemes that the government now promises to ‘launch’ in 2017 to soften the blow of demonetisation will certainly not be enough. Converting Kisan credit cards into RuPay cards, providing Rs 6,000 to pregnant women, doubling NABARD support to cooperative banks and societies and the enhancement of existing benefits already existing under rural housing may appear as if an olive branch is being extended to dispel rural anger but as has been widely reported these schemes were already in operation but simply not implemented in right earnest. A fact-check carried out by Business Standard (Jan 1, 2017) has very clearly shown how existing schemes are being recycled.

Take for instance rural housing. It is claimed “the number of houses being built for poor under the Pradhan Mantri Awas Yojna in rural areas is being increased by 33 per cent.” An investigation by Down to Earth magazine has shown that against a target of 30 million rural housing units by 2020, only 32 housing units have been constructed so far and that too in just one state. The subsidy provision to add additional floor or a pucca house too is nothing new.

Writing off the interest for two months on cooperative loans taken by farmers is also not overly beneficial. After November 8th, cooperative banks have practically remained inoperative as a result of which farmers have not been able to pay back loans. Some analysts have shown that the interest write-off comes to less than Rs 1,000 on a loan of Rs 1 lakh. I don’t know how the interest write-off for two months is being seen as a financial relief for the beleaguered farmers. The outstanding loans drawn from nationalised banks remain untouched. Home minister Rajnath Singh has made it abundantly clear when he told a political gathering in Uttar Pradesh that a full loan waiver is not possible because of the huge financial implications involved.

The indifference towards agriculture stems from existing policy bias. Successive governments have been making efforts to trans-locate farm workers to urban centres. The National Skill Development Council projects the percentage of farmers to be reduced from the existing 56% to 38% by the year 2022. It actually targeted to bring the farm population down to 18% initially, but later revised its estimates. Former RBI Governor Raghuram Rajan has gone on record to say that the biggest reform will be when farmer are pushed out of agriculture to provide cheap labour for the industry. The deputy chairman of the NITI Ayog too has been reiterating this time and again. This follows a diktat from the World Bank way back in 1996 wanting 400 million people to be moved out of rural areas by the year 2015. Accordingly, pushing farmers out of agriculture is the only way to move people out of poverty. The underlying idea is to move people out of rural areas into the cities where they will be employed as dehari mazdoor.

While the agriculture sector gets a largely empty promise of how farm incomes will be doubled over the next five years, minister for urban development, M Venkaiah Naidu, has shown where the thrust of the economic policies are. He says the plan is create 22 more cities the size of Bangalore. In addition, the landscape of 3,041 existing cities will have to be transformed to make them more liveable. He says this is important to achieve economic growth. A great deal of effort therefore has been undertaken to create economic conditions that force farmers to abandon farming and migrate to cities. To say that agriculture sector has failed to keep pace with economic growth the country has witnessed in the last 15 years is a clever ploy to cover up the deliberate efforts to keep farmers impoverished.

At a time when the MNREGA budget exceeds the budgetary provisions made for agriculture, which employs 56% of the population, I am not expecting the upcoming budget to shift focus and to magically make farming economically viable. Although the Prime Minister has time and again said that his government is for the farmers – and although a slew of measures have been spelled out to make farming viable such as the provision of soil health cards and neem-coated urea fertilizer – farming as a whole needs more public sector investments geared towards enhancing income support.

The upcoming budget cannot be expected to provide all the economic solutions but can certainly be indicative of a policy thrust towards reviving the rural economy. This will require financial support for setting up rural infrastructure, including more resources for a network of regulated mandis and rural godowns. According to Commission for Agricultural Costs and Prices (CACP), there exists only 7,000 regulated mandis in the country at present against the requirement of 42,000 mandis. This will help providing an assurance against distress sale by farmers.

Providing urban amenities in rural areas, as opined by former president Abdul Kalam, now stands forgotten. Facilities such as educational institutes, colleges, hospitals, along with agri-based industries in the villages and at the block level will create opportunities within rural areas that will drastically reduce migration to urban areas.

Although finance minister Arun Jaitley had listed ‘farm incomes’ as his top priority in the first full budget he delivered in 2015, nothing concrete has been recommended so far. My suggestion would be turn the CACP into a ‘Commission for Farmers Income & Welfare’ (CFIW) with the mandate to work out mechanisms to provide a monthly assured income to farmers. As per the Economic Survey 2016, the average annual income of farming households in seventeen states is a meagre 20,000 rupees. The effort should be to ensure what farmers get is in accordance with the minimum living standards laid out under the Seventh Pay Commission.