Telecom services have been cut off at sections of Delhi after police lathicharged and teargassed protesters across the city. 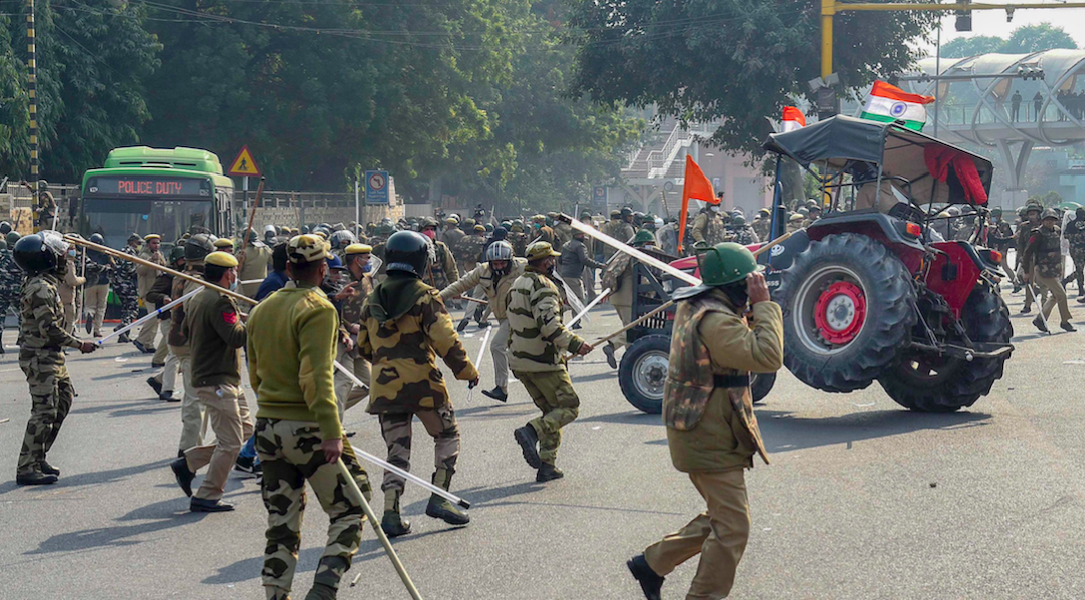 New Delhi: Protesting farmers’ tractor rallies into the National Capital were met with barricades, lathi charge and tear gas in several places on Republic Day, escalating into clashes at the Red Fort, Kashmere Gate and ITO and the death of a farmer.

The Samyukta Kisan Morcha has issued a statement condemning violent acts and has dissociated itself from groups which deviated from the decided route. Later in the evening, it called off the tractor rally and urged protesters across Delhi to return to the protest sites at the borders of Delhi.

This is the first time that farmers, who have been protesting at the borders for two months against the Centre’s farm laws, have entered Delhi. As Delhi Police sought to remove protesters from the Red Fort premises, personnel unleashed rounds of lathicharge on them. Unconfirmed reports have it that a young protester has suffered a bullet injury, presumably as a result of police firing at the Red Fort.

Mobile internet services have been snapped in large parts of NCR, including Singhu, Ghazipur, Tikri, Nangloi and adjoining areas, on orders of the MHA. In addition, several entry and exit points of Metro lines, along with traffic routes have been shut down.

In three districts of Haryana, internet services will remain snapped for 24 hours.

Following a meeting by functionaries of the Union home ministry, the Centre has reportedly decided to deploy additional paramilitary troops in Delhi.

One farmer was reportedly killed while driving his tractor. The police say it was an accident and his tractor overturned, but other protesters claim he lost control of his vehicle after being shot at. His body, wrapped in the tricolour, has been kept near the ITO flyover by protesters, who are not letting an ambulance take it away as they allege doctors will “change the reports”.

Police used a number of tear gas shells to disperse protesters at ITO.

At Tikri and Singhu borders, farmers had broken Delhi Police barricades to begin their march into Delhi. “We are protesting peacefully, we will come back to the border after our Republic Day march. The tractors’ alone stretch over 50 km here,” a farmer at Tikri border told The Wire.

The Delhi Police had granted permission for the tractor rally, on the condition that protesters enter Delhi only after the government’s Republic Day parade on Rajpath ends. As the march progressed, at a few places the protesting farmers broke away from the pre-decided route. Some farmers also reached the Red Fort complex, and protested there.

Farmers’ flags have added value to the Red Fort.
Today’s day will be remembered as ‘A True Republic Day’ pic.twitter.com/Jh5gclguc7

A section of protesters also hoisted the Nishan Sahib, a Sikh religious flag, and a flag of a farmers’ union at the Red Fort. Reports that these flags had replaced the tricolour were soon debunked by journalists on the ground, who said that the flags were hoisted on an empty pole and did not involve any replacement.

“There are some youngsters that have reached ITO and Red Fort. They are farmers like us. Our effort is to maintain peace. We are trying to speak to them and ensure that people are on the assigned route,” Ruldu Singh Mansa, leader of the Punjab Kisan Union, told the Indian Express.

ANI has reported that two policemen were injured while attempting to stop farmers from progressing with their rallies.

The police also lathi-charged farmers and fired tear gas shells at Singhu border, but farmers continued on their way. At Ghazipur border too the police fired tear gas, and gathered crowds dispersed because of it. According to PTI, the police has appealed to protesting farmers to maintain peace and head back to their pre-decided routes for the tractor parade.

“Police tear gas chodh rahi hai, tractor chalane me dikkat hui. Hum unko ye kehna chahte hain ki hum unke virodh me nahin hain, unka sahyog karengey. Kaun se Modi ke bachche hain police me, sabb humare hi toh hain (The police is firing tear gas shells, making it difficult to drive the tractor. We want to tell the police we are not against them, we will help them. It’s not as if Modi’s sons are in the police – they are our sons),” a farmer at Ghazipur border told The Wire.

A number of the farmers’ unions said a majority of their members are still continuing on the routes set by the police, and the march is peaceful at those places.

“Small groups from all unions have gone to the Red Fort. It’s out of our control, but we’re are still on the set route,” Tejinder Singh Virk of Terai Kisan Union, which is a part of the Samyukta Kisan Morcha, told The Wire. Kavita Kuruganthi of the AIKSCC too said that while there have been disturbances, “there are peaceful protests happening too on set routes”.

At the Ghazipur border, energy and excitement were high despite it being a cold morning. Farmers played music, chanted slogans and prepared themselves for the day of protest ahead of them.

A lot of the farmers who joined the march today are those who have not been able to attend the Delhi protest regularly, because of work on the farms or other obligations, but have made it a point to join the Republic Day special event. “We go to the local protests in Punjab, but we felt the need to come to Delhi today,” one such farmer at Ghazipur told The Wire.

At Singhu border too, thousands of tractors are slowly making their way further into the capital, led by marching farmers. The tractors have been decorated with the tricolour and several of them are playing patriotic songs, in the spirit of Republic Day.

Thousands of women too are part of the tractor rally, as has been a characteristic of this protest from its start. “Of course women will be affected too!” a protesting women farmer told The Wire at Ghazipur. “We will be here, standing with our farmers’ unions, until these laws are repealed.” 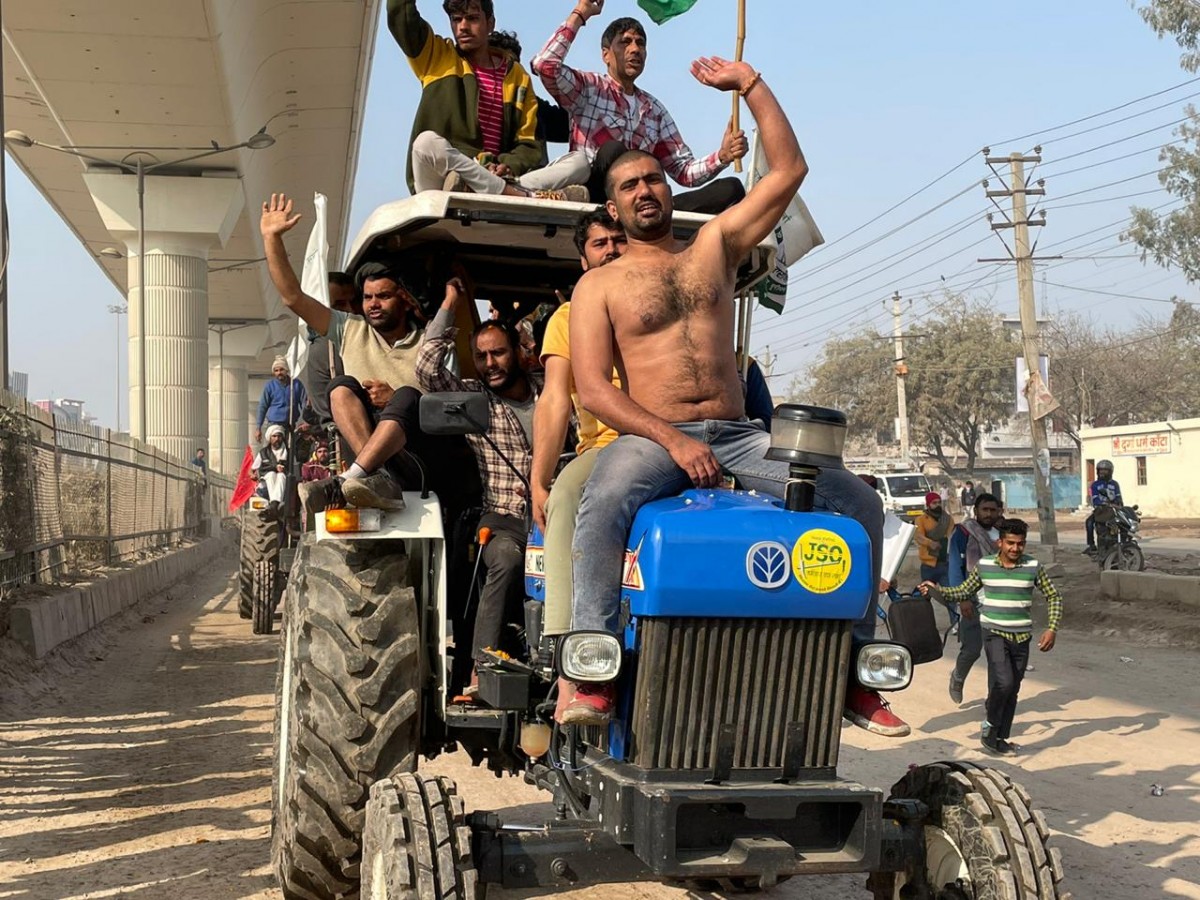 Security arrangements are tight at all the borders and through the city, with several roads closed because of the two parades – the official one and the farmers’ march – planned on Republic Day. At Ghazipur border, police said farmers were “not obeying rules”. “Sambhavna hai ki mahaul kharab ho (It’s possible that the atmosphere will turn negative),” a policeman told The Wire.

For months now, farmers from across Indian states have been camped at Delhi borders, with the police not allowing them into the capital. They are protesting against the Centre’s three new contentious farm laws, which farmers believe will allow for the corporate takeover of farming and hurt their incomes. Eleven rounds of talks between the Centre and farmers’ unions have failed so far, with the protesters insisting on a complete repeal of the laws rather than the ‘1.5-year stay’ offered by the government.

Note: This is a developing story and is being updated as developments take place.