A Month on, Farmers Remain Resolute Over Repeal of Farm Laws

While the Centre sent a fresh invitation to the agitating farmers on December 23, protesters requested the government to not propose the same amendments which they have argued against already. 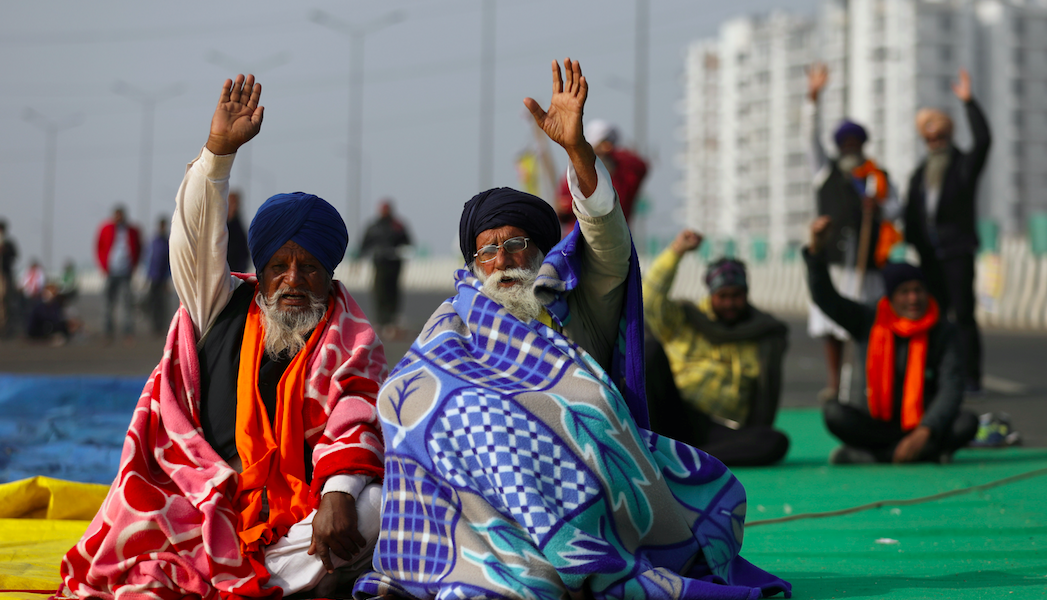 Mohali: The farmers’ ‘Dilli Chalo’ movement will complete a month on December 26, 2020. What started at the village block level, mainly in Punjab, has panned out across the country and Indian embassies, and foreign parliaments.

At the completion of 30 days, the gridlock over the farmers’ demands remains. The Centre sent a fresh invitation to the agitating farmers on December  23. In a press conference held on the same day, protesting farmers responded and said that they are ready to meet the government but only if it does not propose the same amendments which the farmers have already argued against point-by-point.

One may say that the farmers’ demands – a complete repeal of the laws, may be far-fetched. But the farmers’ unions have sharply argued their case in the many meetings that have taken place so far.

Kiran Vissa, who is a working group member of the All India Kisan Sangharsh Coordination Committee (AIKSCC), and an active farmers’ leader from Telangana, believes that the  government has no more proposals to offer to the agitating farmers because the nature of the demands is such that they can be met only if the farm laws are repealed.

“The government has the sharpest of brains working for it. The fact that they’ve not been able to come up with a proposal which meets our demands means that our case is strong,” he told The Wire over the phone.

“See, we demand the removal of a dual market structure and this simply collapses the first – APMC Bypass Act. So the only way the demands can be met is by a complete repeal of the laws. The government has refused to look into the nature of our demands in a substantive manner,” he added.

To get the government to look into the demands with seriousness, the only option left with those agitating is to resort to “pressure tactics”. The farmers’ union, especially from Punjab, have proved to be quite good at it.

The latest “pressure tactic” involves requesting the Punjab-origin British members of parliament to write to  UK Prime Minister Boris Johnson to not attend the Indian Republic Day ceremony on January 26 – the invitation to which he has accepted already.

In addition to this, at least five borders around New Delhi – Singhu, Tikri, Ghazipur, Delhi-Jaipur Shahjahanpur and the Delhi-Agra Palwal, are swelling up each day as farmers make their way from Madhya Pradesh, Rajasthan, Maharashtra, Uttar Pradesh, Gujarat, Haryana and Punjab.

Farmers protesting for the repeal of Central farm laws have their meal on a highway in Delhi. Photo: Rohit Kumar.

Pratibha Shinde, activist and general secretary of the Lok Sangharsh Morcha, who is at the Shahjahanpur border, with thousands of protestors told The Wire over the phone that over 3,000 farmers and labourers from Maharashtra are on their way too. “A vehicular march with 1,000 vehicles with almost 3,000 kisans is on its way,” she said. Meanwhile, a large crowd of farmers from, mainly, Madhya Pradesh has occupied the Delhi-Agra Palwal border.

Those at borders other than Singhu and Tikri are slowly gaining momentum in terms of numbers, resources like food, water and sanitation, and even media attention. Although Punjab’s farmers have shown the way to the others, Shinde said that for many coming from Maharashtra in the biting north-Indian winter is a rare experience. “It will be a challenge for us,” she added.

Even as lakhs of agitating farmers, under the banners of at least a hundred farmers, labourers and student unions have gheraoed Delhi from five sides, the government, earlier this month, said that at least 10 farmers’ unions under the banner of All India Kisan Coordination Committee (AIKCC) submitted a signed acceptance to the amendments proposed by them.

But the farmers’ unions at the forefront of this agitation said that AIKCC was never a part of the agitation – which means they were satisfied with the laws in the first place and have accepted the amendments made to it too.

Those agitating against the farm laws said that the ball is in the government’s court and it can choose to play the game with seriousness or keep sitting on it. Either way, the stamina on the side of the farmers is enough to keep them going, they said.

The last one month, and for Punjabi farmers, the last four months, were full of  hurdles – the lack of media attention on the subject of agriculture, the coronavirus pandemic, state surveillance on farmers’ leaders, fake news propaganda and a general apathy of the current government towards those resisting its dictum.

Yet, they have overcome each hurdle with organisational capacity and grit. The government still has the option to emerge smartly, and in good faith to end the gridlock.