How the Farmers' Movement Brought the Modi Government to its Knees

At every stage of the agitations, the BJP-led government attempted to crush the farmers’ movement. And failed. 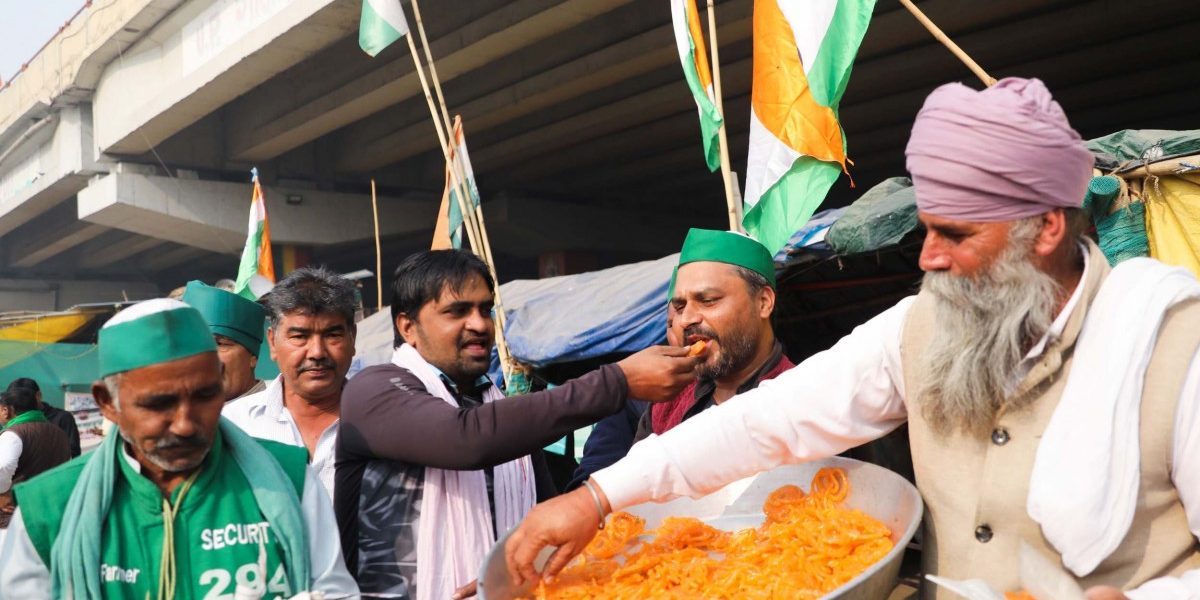 Farmers feed each other sweets and celebrate as they pose for pictures after Indian Prime Minister Narendra Modi announced that he will repeal the controversial farm laws, at the Ghazipur farmers protest site near Delhi-UP border, India, November 19, 2021. Photo: Reuters/Anushree Fadnavis

New Delhi: In what will be hailed as a great victory for the year-long farmers’ movement in the times to come, Prime Minister Narendra Modi on Friday morning announced his government’s decision to repeal the three controversial farm laws. The Union government until now had been unrelenting, with none other than Modi himself scornfully calling the protesting farmers “andolan jeevi (those who live off agitations)” on the floor of the parliament. The BJP machinery attempted to brand the farmers’ agitation as one led by Khalistani separatists and funded by terrorist groups.

The farmers, however, remained unwavering in their commitment to their call for a complete repeal of the farm laws, which they believed were “pro-corporate” and “anti-farmer”. Contrary to the Union government’s claims that farmers were consulted before the laws were passed, the protesting groups reminded people that the laws were first brought in through Ordinances in June 2020, akin to what they believed was a backdoor imposition of the news laws on them.

At every stage of the agitations, the BJP-led government attempted to crush the farmers’ movement, the most ghastly episode being the way agitating farmers were mowed down in Lakhimpur Kheri, Uttar Pradesh, by a convoy of cars allegedly involving junior home minister Ajay Mishra’s son.

More than 600 protesting farmers died during the agitations. Several were booked under harsh laws. The government used its police machinery to disrupt the movement. The Singhu and Tikri borders of Delhi, where the farmers had been staging demonstrations, were practically turned into open prisons. Following the Republic Day march by farmers early this year, the police came down heavily on some of the farmers’ leaders. Yet, the farmers remained steadfast in their resolve to continue with the protests. Such was their determination that the crackdown on Bharatiya Kisan Union leader Rakesh Tikait after the Republic Day march at Ghazipur border of Delhi gave a fresh lease of life to protests, taking the demonstrations across poll-bound Uttar Pradesh. 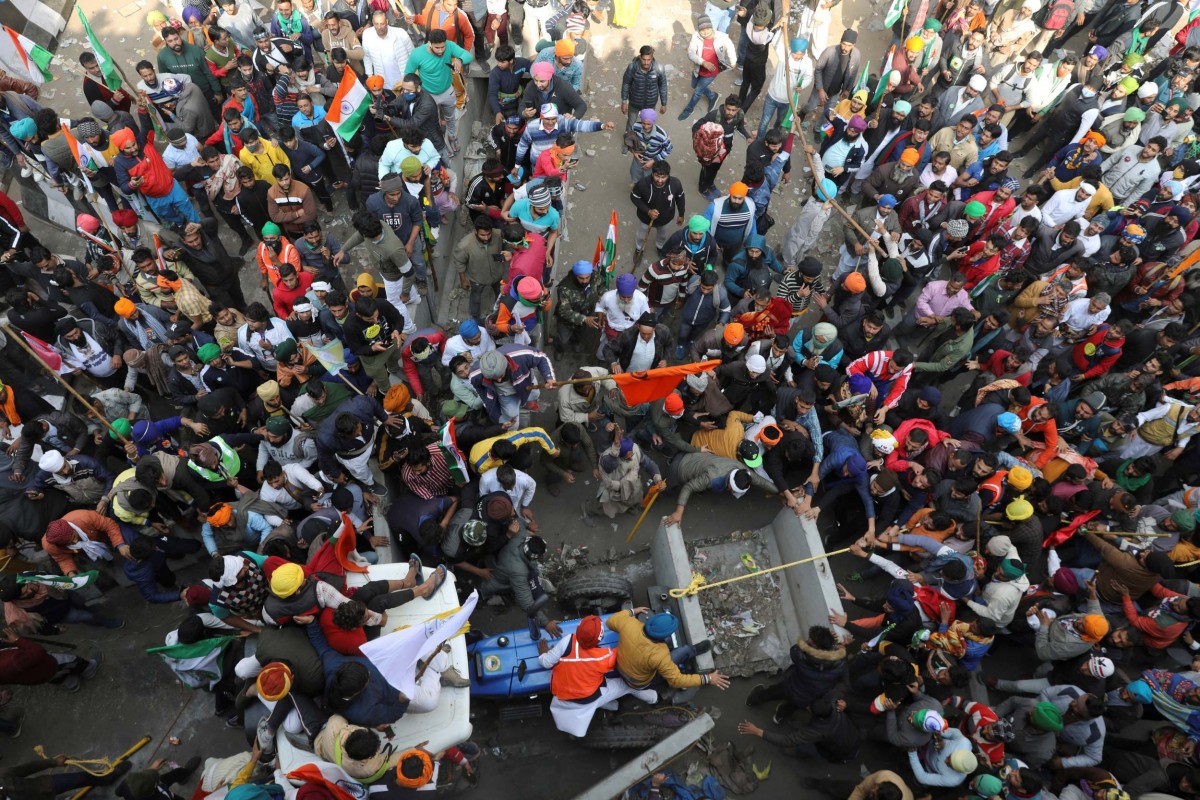 Farmers and protesters pull a blockade using tractor during a tractor rally to protest against farm laws on the occasion of India’s Republic Day at Tikri border near New Delhi, India, January 26, 2021. Photo: Reuters/Anushree Fadnavis/File Photo

The prime minister’s decision to repeal the laws indicates that the farmers’ agitations brought the Union government to its knees. Over the last seven years, the Modi government has earned the reputation of being dismissive towards people’s agitations. Even an acknowledgement of demands by agitating groups was seen with contempt, or as a sign of weakness for the government obsessed about projecting itself as strong and decisive. Such a tone-deaf approach has often led the Modi government to gravitate towards taking authoritarian stances.

On the other hand, the farmers’ movement evolved dynamically ever since it began. From a protest that took roots only in Punjab, it grew into a country-wide movement in which farmers’ groups set aside their differences and collaborated to take on the powerful government. Slowly and gradually, different leaders from various states came together and mounted a united front, in the process blurring multiple caste and community contradictions. Each time the movement had to suffer a setback, it came out stronger. The slogan “Kisan Ekta, Zindabaad” that hung in the air at all protest sites also became the call for many farmers who didn’t get a chance to actively participate in the agitations.

In the last few months, the farmers’ agitation progressed into becoming a political movement against BJP’s polarising tactics. It helped heal the tensions between Jats and Muslims – the two communities torn apart in the aftermath of 2013 Muzaffarnagar riots – in western UP. The movement became the platform for bringing together many communities. Earlier, the farmers’ leaders campaigned extensively in West Bengal as an anti-BJP force, and contributed crucially to the humiliating defeat of the fledgling saffron party in the state. There were several instances in which people did not even let the BJP leaders campaign in their villages. The movement also triggered an exodus of lower-rung BJP leaders to other parties in several states.

In every aspect, the movement set an example and showed a way forward to offset attempts by political parties to polarise society on communal lines. In the aftermath of Muzaffarnagar riots, the BJP was the sole beneficiary of the hostility between Jats and Muslims. In Haryana, the saffron party pitched dominant Jats against other smaller communities, following a cynical method of polarisation for electoral wins in most states.

After being contemptuous about the farmers’ movement in every way, Modi’s announcement to repeal the farm laws sounded similarly cynical. Despite attempting to crush the movement, the prime minister spoke about doing “everything possible” to help the farmers. He spoke about his government’s commitment to farmers’ welfare but while withdrawing the farm laws also made it a point to talk about his inability to “explain the truth” to the farmers.

His decision has come only a few months ahead of the crucial assembly elections in India’s most-populous state, Uttar Pradesh, where the BJP is eyeing another term in power, and Punjab, where it has lost it most-dependable ally – the Shiromani Akali Dal (Badal) – in the course of the farmers’ movement. With grim prospects in both the states, Modi’s decision to repeal the farm laws appears to be one that has been taken with only electoral considerations in mind.

The opposition in both the states have consolidated their position, riding on a wave of anger against the BJP among farming communities. Multiple surveys have pointed out that the BJP may face heavy losses in western UP, its strongest bastion in the state. Similarly, in Punjab, Modi’s move opens up the possibility of a BJP-SAD (Badal) alliance once again, or a partnership with former Congress chief minister Amarinder Singh, who had declared that he was open to a pre-poll alliance with the BJP if the Union resolves farmers’ issues.

Modi’s decision gives the BJP some play in the upcoming elections. It is intended to prevent any further damage to the party. He may have projected his move as a gift to agitating farmers on the occasion of Guru Nanak Jayanti, but it is hard to miss that the farmers’ movement brought him to a point from where he could not have taken any other decision.

The victory of the farmers’ movement also marks the Modi government’s first real defeat in the last seven years. In that sense, it is a momentous occasion in India’s political history.