The move comes a day after it announced a four-hour nationwide 'rail roko' (rail blockade) on February 18 to press for their demands. 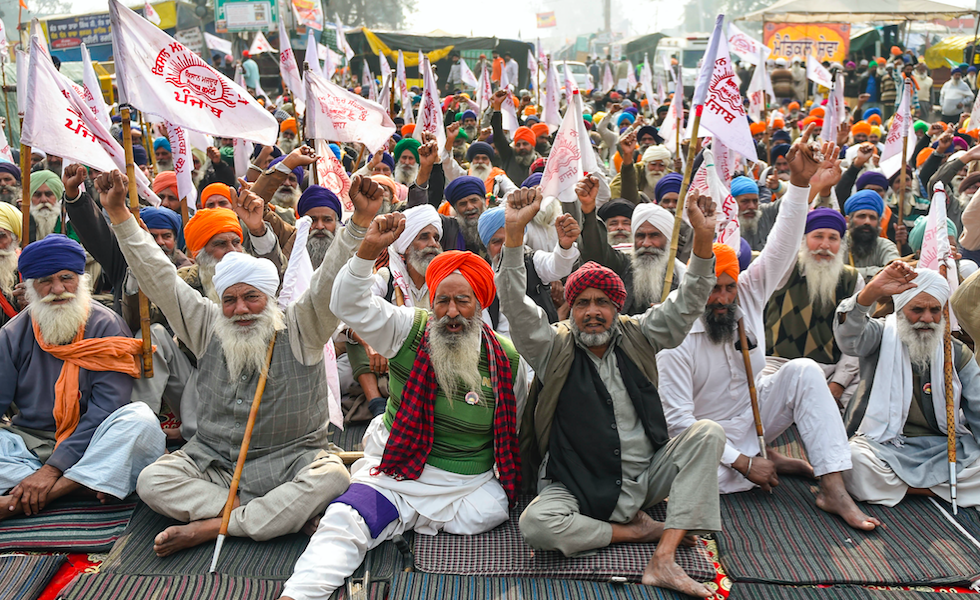 Farmers at the Singhu border on January 28. Photo: PTI

New Delhi: The Samkyukta Kisan Morcha, an umbrella body of protesting farmer unions, on Thursday announced that kisan mahapanchayats will be organised across the country in the coming days against the Centre’s three agriculture laws.

The morcha made it clear that it will not call off the ongoing protest until its demands to repeal the laws and bring legal guarantee for minimum support price on their crops are met.

In a statement, the protesting farmers’ body said that its teams are planning the programmes of the state-wise mahapanchayats.

The move comes a day after it announced a four-hour nationwide rail roko (rail blockade) on February 18 to press for their demands.

Thousands of farmers, mostly from Punjab, Haryana and western Uttar Pradesh, have been camping at the three Delhi border points – Singhu, Tikri and Ghazipur – for over 75 days.

In a statement, Pal alleged that the government is not serious to fulfil the “fair and genuine” farmers’ demand of ‘karza mukti, pura daam‘.

The unions also claimed that the Haryana government has proposed to install CCTV cameras at the Tikri border protest site.

Meanwhile, Swaraj India leader Yogendra Yadav, who has been actively involved in the agitation, issued a statement terming as “baseless” the allegation made by Congress member Ravneet Singh Bittu blaming him for the Republic Day violence in the national capital.

Speaking in the Lok Sabha on February 9, Bittu claimed that Yadav had incited the farmers which lead to the violence on January 26.

At the Singhu border protest site, the unions have begun strengthening the infrastructure by installing CCTV cameras for enhanced security, electric fans to beat the heat in the coming months, and laying separate optical fibre line for wi-fi facility in case there is another internet shutdown.

These are some of the measures taken by the agitating farmers to prepare for a long haul as a resolution of the stalemate over the new farm legislation seems unlikely anytime soon.

“We are strengthening our communication and other infrastructure to continue the agitation for a long period,” said Deep Khatri associated with managing logistics at the Singhu border protest site.

To increase security measures and keep miscreants at bay, 100 CCTV cameras with digital video recorders are being installed at the main stage used by the Morcha and also at some identified spots across the protest site’s stretch on the GT Karnal Road.

The protesting farmer unions have been alleging that the laws will weaken the minimum support price mechanism and end mandi system. But the government says the new legislations offer more options to farmers to sell their crops, and will help raise their incomes.