"The tractor parade will create history. Even after that, we will be here, unless the laws are repealed, we are not going anywhere," Kuldeep Singh from Patiala said.

A farmer cooking at the langar at Singhu border. Photo: Himadri Ghosh

Singhu, Delhi: As the night descended, thick fog shrouded the area. Water droplets constantly drip from the ceiling corners of the tent. An indistinct chatter can be heard afar.

The sound of a roaring Royal Enfield breaks the silence. A bike with saffron Khalsa flag pivoted at the front-end arrives and a man riding pillion, holding a united farmer’s flag, screams ‘Kisan-Mazdoor ekta’. People from all around, with blankets draped around their shoulder, immediately reply by saying, ‘Zindabad’.

This is well past the sleeping time for most farmers at Singhu, a border of India’s capital with Haryana. Preemjit Singh of Punjab’s Barnala district said, “All night long volunteers stay awake to guard this place. Sometimes, some of them chant slogans.” 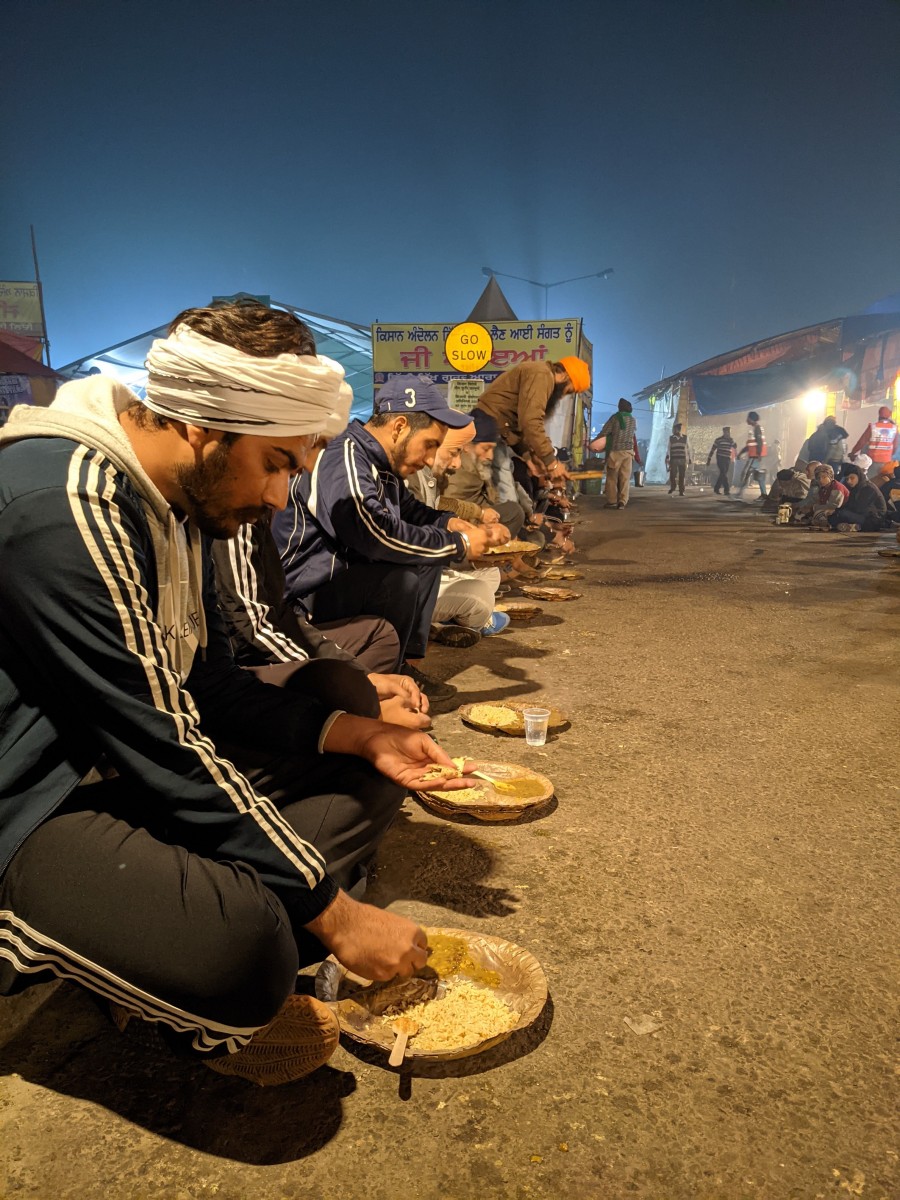 Farmers having dinner offered by langar while sitting on the national highway. Photo: Himadri Ghosh

Those young farmers were not simply chanting. With those chants, at that hour, they were reminding their fellow farmers, the cause and purpose for which all of them had left their houses and gathered for the struggle.

The farmers have, very intelligently, countered the smear campaign unleashed against them by the Modi government. Right at the forefront is the media – which desperately tried to tarnish the image of the protesting farmers. They called them Khalistanis, said that the farmers only belonged to Punjab, questioned their ability to speak English and called the protest a ‘picnic’ when some langars served pizzas. But the reality is that farmers from Punjab, Haryana Maharashtra, Uttar Pradesh, Himachal Pradesh, Tamil Nadu, Telangana, Andhra Pradesh are sleeping beside each other and articulating a message of unity.

While this correspondent only met farmers from the aforementioned states, farmers from several other states could also be present, as the protest site is stretched over an area of over 20 kilometres.

Farmers have identified the journalists who tried to crush their unity and paint them as anything but farmers and have erected photos that have the words, “No entry to sell out media” written below.

The most important aspect of this protest, which is often missing in most cases, is that every single person knows what the fight is for and what the demand is: a repeal of all the three farm laws.

The unity has been vast and is reflected in every bend of the road, inside tents, at the two large daises and on everyone’s faces – Dalits-Jats, Haryana-Punjab, Hindu-Muslim-Sikh are all in here, together.

Also read: From Trolley Times: How Women Became an Integral Part of the Farmers’ Protest

A group of over 150 farmers from Tamil Nadu, Andhra Pradesh and Telangana reached Singhu border on Sunday morning. Forty-seven-year-old Raju Perumal said, “We all are protesting in our states for months now. We thought at least some of us should be present here (Delhi) for the republic day rally. So we are here. We will show Modi what’s our strength.”

Echoes of the chant, ‘Modi Sarkar murdabad’ can be heard across the protest site from early in the morning to late at night.

The Centre has constantly attempted to label the peaceful protesters as Khalistanis, Maoists or Naxals. The protesters came heavily armed with the imagery of their icons and leaders like Guru Teg Bahadur, Bhagat Singh, Baba Banda Singh Bahadur etc. transcending the protests into a cultural revolution of sorts.

Paintings, songs, quotes, graffiti, slogans, memes, placards have filled every nook and corner of the protest site. Tractors have become a symbol of dissent, adorned with the tricolour and the farmers’ agitation flag which reads, ‘No Farm, No Food’. 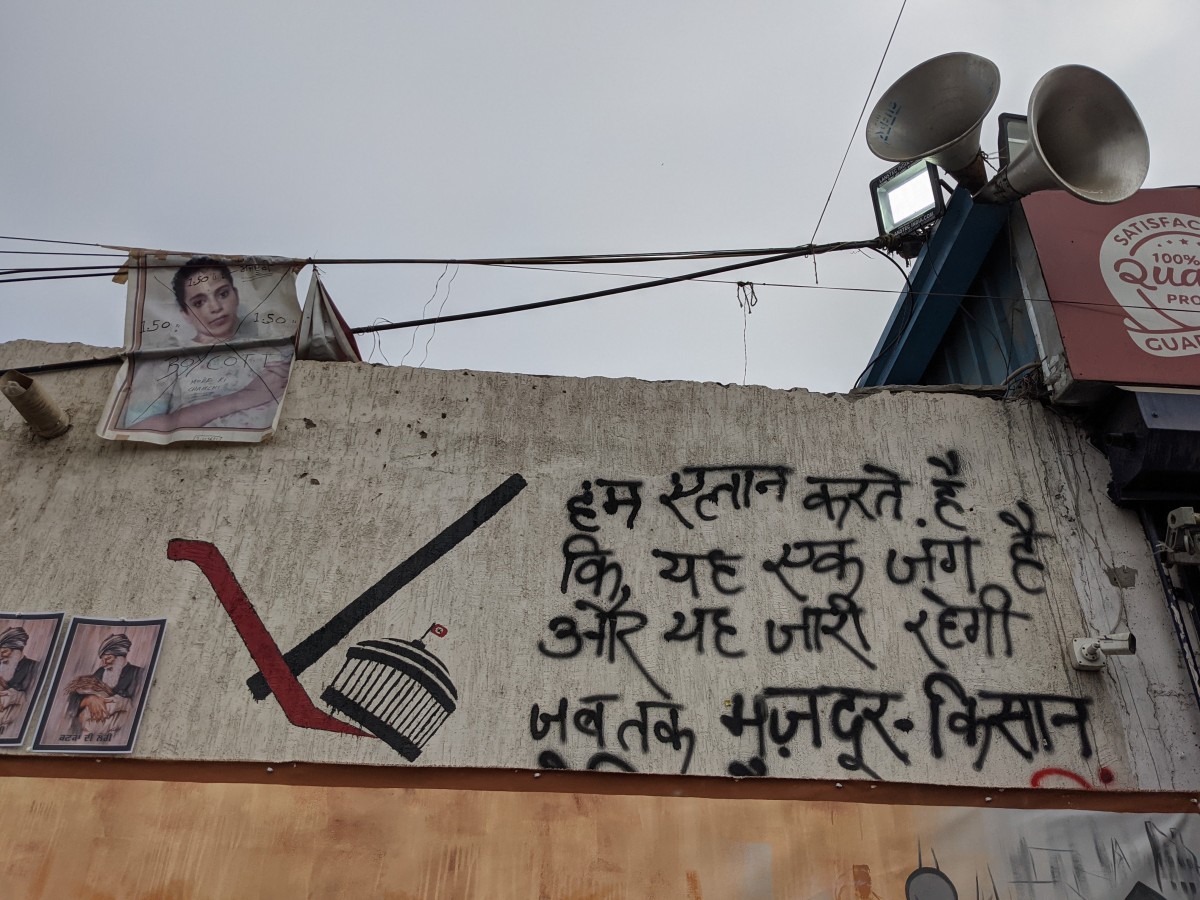 A graffiti at the protest site depicting a plough uprooting the Indian parliament. Photo: Himadri Ghosh

Two Freelance artists, 26-year-old Ravi Ravraj and 34-year-old Gurdeep Singh were giving final touches to the 230 square feet canvas painting. The painting has three parts and took them 10 days to complete. “This is no ordinary protest, so we are doing our part so we are voicing our opinion through art,” said Ravraj.

Watch | ‘Farm Bills Are an Attempt to Wipe Out the Fortunes of Farmers’: P. Sainath

Stickers that read ‘I love Kisan’ and ‘No farmer, no food’, were plastered over bags and jackets. Badges of the same slogan were pinned on the chests of the determined farmers who marched along. 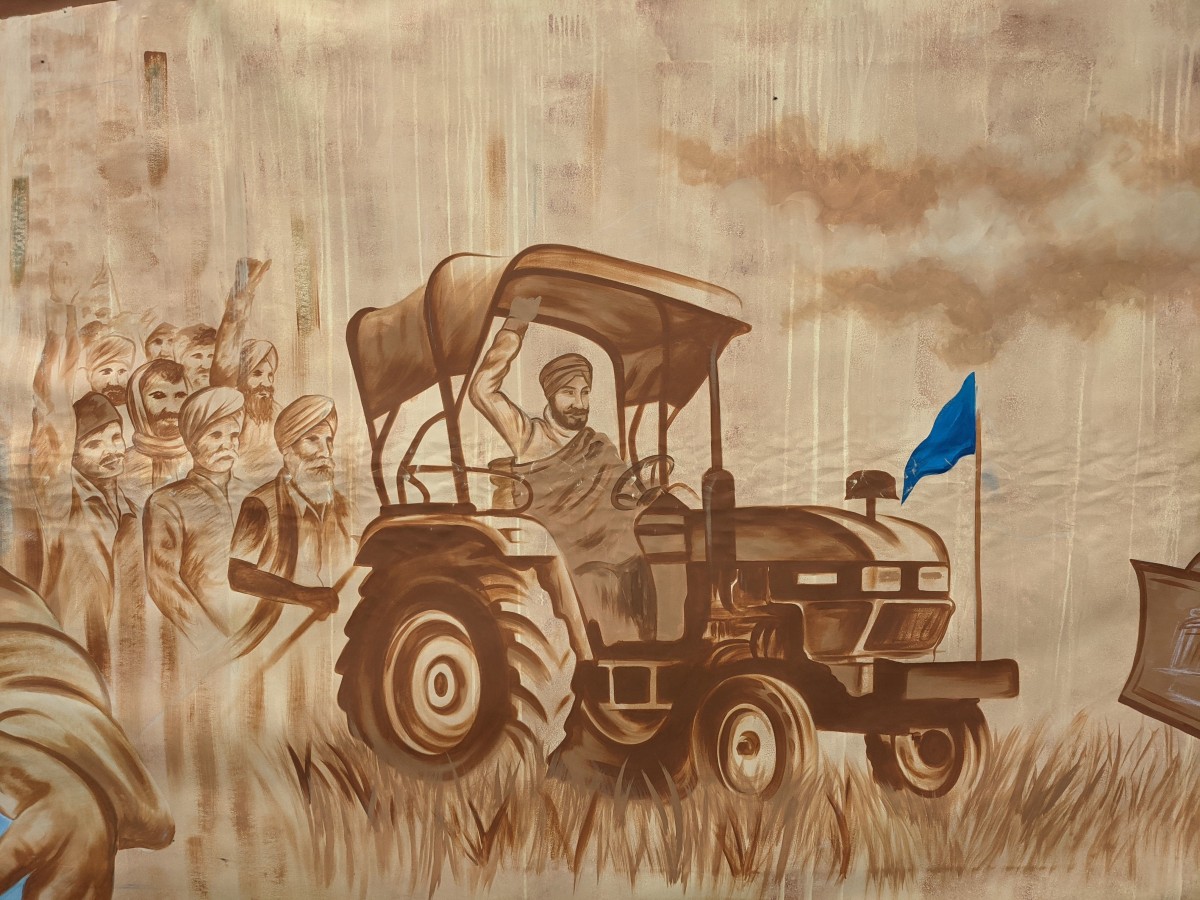 At the break of dawn, sounds of prayers filled the air. Soon people started to move around, some were sipping hot tea, some started cutting vegetables for langar and sounds of tumblers added to the ambience of commotion.

After a little while, a mix of middle-aged and older people took the main stage to read the Gurbani aloud. More people slowly started to pour in. By the time the second group took the stage, the largest stage of the protest site was filled till the farthest corners. The tune and tempo of the music had a revolutionary tenor. As the singer chanted “jo bole so nihaal”, hundreds, in unison, said, “sat sri akal”.

A day before a historical tractor rally, farmers in Singhu are filled with a positively infectious energy. Kuldeep Singh of Patiala, who has been camping at the protest site since December 28, said “The tractor parade will create history. Even after that, we will be here, unless the laws are repealed, we are not going anywhere.”

Wary of any unforeseen events, Singh said, “We all are alert. At any cost, we will have to refrain from any untoward event. There might be provocations from the other side, but we will show restraint.”

On the eve of Republic Day celebrations, thousands of Indian flags can be seen fluttering in the chilly winds. These farmers are ready to show their strength, the same way their tractors are all set to hit the streets tomorrow.