Following the Farmers' Protest, and Watching the Mood Change on Republic Day

Matters would not have come to this had the government been sincere about addressing farmers' concerns. 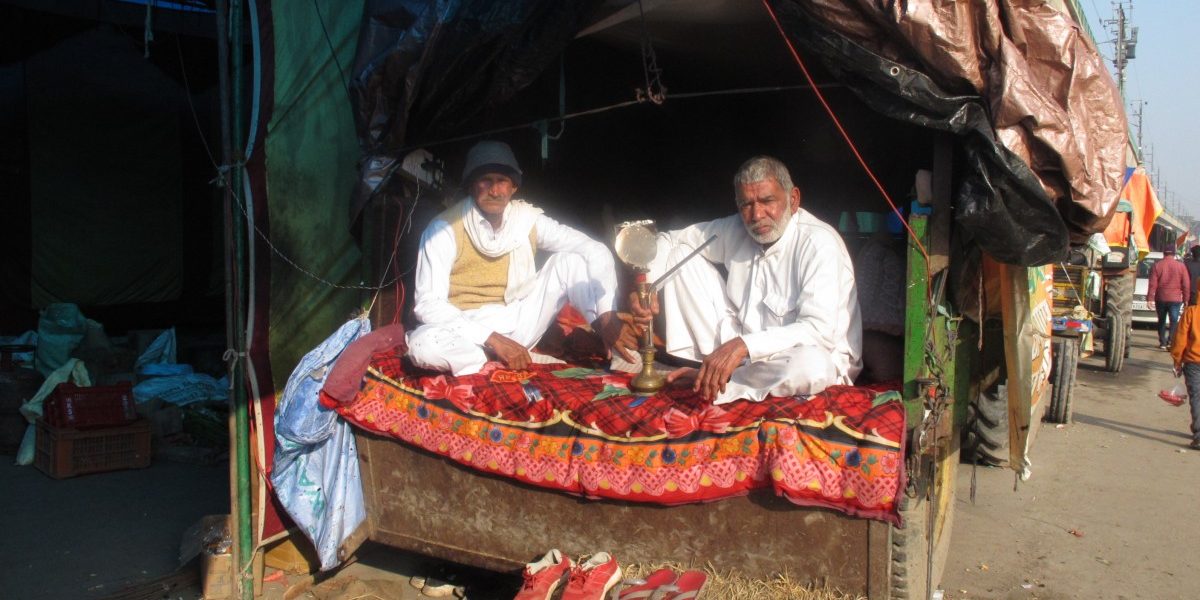 Jagdish and Ram Bira, both in their 70s, pulling on their hookah at the Tikri border. Photo: Charu Soni

New Delhi: Jagdish and Bira Ram, both in their 70s, had been sitting on a peaceful protest for more than month and a half when I met them at the Tikri protest site. Sitting on a red, patterned blanket with a small hookah that they passed between themselves on the edge of their trolley, they were both determined and anxious.

They were determined to get up and make their way to Delhi when the call from the leaders came, and were anxious about the outcome of talks with the government. “We don’t want these black laws. But the government is obstinate,” Bira Ram from Nehla village of Fatehgarh asserted. He commended the Supreme Court for recognising his right to protest, but was also upset that mobile jammers had been installed that disabled communication with family back home. “I haven’t spoken to them for three weeks now, it’s upsetting.”

Jagdish’s eyes welled up with tears he was holding back as he met Bira Ram’s eyes. Hailing from the village of Dani Daulak, also in Fatehgarh district, Jagdish said he was ready to die for the cause, “Let them kill me if need be. I am not afraid. We will get the laws rolled back.” Bira Ram turned to him, and in a comforting tone said, “Don’t worry, the men in police are our sons. They will cooperate.” On the foggy night of Lohri at the Singhu border, the 50th day of the protest, most people had grouped around small fires on the Delhi-Haryana Grand Trunk Road, eating popcorn and exchanging information. At various junctions of the camping site, langar was being served in open pandals with those gathered standing in queues waiting patiently for their turn to be served the evening meal. Gurbani could be heard on the loudspeakers. The tractor trolley camps on GTR had by now stretched over nine km, snaking their way towards Sonipat 17 km away. Each camp here was a courtyard of trolleys turned inwards – with their own makeshift kitchen with a brick-and-wood hearth or chulha, sacks of provisions, vegetables, large drum containers to store water, utensils, aluminium buckets and water heaters. Like a medieval mobile encampment, a world within a world, extended families ringed by kinship and caste.

Weaving through the camps were young men mounted on tractors, blaring hip hop and rap protest songs which completely drowned the sombre notes of the Gurbani. The tractors, decked in shimmering fairly lights and wheeled around narrow spaces left for inner camp vehicles to pass through, if seen from above, would have looked like fireflies; on the ground, they were grunting-hooting pigs. Every now and then, the mobile groups accompanied by dancing groups of strapping men would whistle, joust, break into impromptu bhangra steps or explode in unison, “Kisan ekta zindabad, Modi sarkar murdabad.” A display of machismo, impromptu bravado and bluster. The Punjabis have a word for it, “tashan” – reckless swagger.

Leaders of the kisan andolan or farmers’ movement, under the umbrella of the Sayunkt Kisan Morcha – which represents 40-odd farmers’ unions and organisations, including khaps from Haryana – had been making appeals to Punjabi and Haryanvi youth to desist from turning the evenings into parties, bearing on them the seriousness of the movement, to remember those that had died (now numbering more than 150) while taking part in the protests. “Andolan di maryada rakhe, behna, votia te mae bhi ethe hainge,” Balbir Singh Rajewal of the Bharatiya Kisan Union repeatedly urged from the podium of the protest site at Singhu border, requesting the youth to maintain the decorum and dignity of the movement and keep in mind that mothers, wives and sisters were also part of the protest site – a call for rectitude befitting the cause.

On the day of the tractor march, at the Ghazipur border, a group of farmers from Mathura district sat on hay spread evenly on the side of the NH 58 also known as the Delhi-Meerut Expressway. They were not part of the farmers’ Republic Day tractor march even though they had responded to the call to come to Delhi and join the ranks of the protesting farmers. “We arrived yesterday. The UP police tried to stop us from taking the Agra-Delhi Yamuna Express, but we are farmers, we cut across fields and made our way through villages of Bajna, Khanpur, Shakat, Jattari,” said Hoshiar Singh, aged 56 from village Hasanpur in Mathura district.

His companion, Mohan Singh aged 65 from Parsauli village, chipped in, “We have heard about the police stopping farmers at many places. We will continue our sit in here for however long it takes for the sarkar to withdraw the laws.” This group of Mathura farmers represented the traditional image of farmers that the nation is used to, dressed in white dhotis and kurtas, wearing hand-knit sweaters, sleeveless Nehru jackets and wide grey shawls slung across stheir houlders. The events at Ashram had just reached our ears, and this group was calm and resolute. The Red Fort and ITO events were yet to overtake the day. Sitting on hay spread on the NH 58 farmers from Mathura district who made their way to Ghazipur protest site in spite of police barricades at Agra-Delhi Yamuna Expressway. In the forefront, Mohan Singh from village Parsauli. Photo: Charu Soni

Post noon it became impossible to access the internet on the mobile and calls were not coming through. The Ministry of Home Affairs ordered the suspension of internet services, “in the interest of maintaining public safety and averting any public emergency, it is necessary and expedient to order temporary suspension of Internet in areas of Singhu, Ghazipur, Tikri, Mukarba Chowk, Nangloi and their adjoining areas in the NCT of Delhi from 12:00 hrs to 23.59 hours on January 26,2021”. Tractors, cars and motorcycles returning to Ghazipur from Delhi bore the news: there were clashes with the police at Apsara Chowk, Nangloi, ITO and Red Fort. A man had been killed.

A witness of the events at ITO intersection, Saurabh Walia from Rasulpur Jatta, Muzaffarpur stood next to a car whose windshield had been smashed and the number plate removed. He had left Ghazipur camp around 11 am and reached ITO around 12:30 pm. It was 3 pm when I met him. Wearing a yellow T-shirt with a red jacket and a grey cloth tied round and tucked round his head, Walia was visibly shaken, “I had reached ITO where traffic barricades had been installed. After some time the barricades were removed by the police. There were some 20 tractors ahead of me. We moved forward but police resorted to lathi charge and tear gas shelling. We wanted to move to Red Fort but made a U-turn from ITO after being hit. Others moved to the Red Fort and some straight ahead. One person was killed.” It was mayhem that was widely telecast by the national media.

The ITO intersection merges six roads – Mathura Road, Tilak Marg, Sikandra Road, Deen Dayal Upadhyay Marg, Bahadur Shah Zafar Marg and Vikas Marg. The tractor march had come by the Vikas Marg towards ITO. The road to Deen Dayal Upadhyay Marg was open with second layer of the traffic barricades erected next to the Andhra Education Society. Bahadur Zafar Marg road was taken by the tractors to go to the Red Fort. The rest of the roads remained barricaded.

When I reached ITO it was 5:25 pm, it took more than two hours to navigate one’s way from Ghazipur to ITO as police had barricaded all roads leading to the place either with buses, concrete blocks or commercial containers filled with sand. A group of people sat with a body draped in national flag in the middle of the intersection, softly chanting “Satnamguru, Waheguru”. They were waiting for Delhi Police to respond to their allegation that he was shot. No representation was forthcoming from the Delhi Police Headquarters just 500 meters from the sit in.

Navreet Singh Hundal, a 26-year-old from Dibdiba in Uttar Pradesh, had taken the Deen Dayal Upadhyay Marg. Every tractor that rode through ITO intersection on Tuesday was speeding. So was Navreet. Minutes later his tractor hit the barricades near the Andhra Education Society ornate gate and rolled over. The footage showing the episode was released by the Delhi police.

Other protesters had said that the Delhi police had fired a tear gas shell just as Navreet drove from ITO-crossing towards the Deen Dayal Upadhyay Marg, but the police has denied this claim. He fell barely 50 meters from Gandhi Peace Foundation. A purple-flowered blanket lying at the spot where he fell had a hole burnt through it. Remains of a tear gas shell lay on the ground next to a jacket with a flag of the Bharatiya Kisan Union coagulated with blood and a single blue canvas shoe. There was also a canister of Cube Aerosol Acrylic Lacquer Spray used to restore the look of a scratched vehicle. NDTV channel reported that there were two other people with Navreet, Angrez Singh and his son. Those gathered round his body told me that they had been taken to a hospital but declined to say which one.

By 5:40 pm, Navreet’s body had been taken away from ITO back to Ghazipur. Back at the camping site, Atinder, a neighbour of the Hundals, said Navreet’s father had been informed and was on his way, “He was delivering sugarcane to the mill when he got to know about his son.” Navreet was newly married, a year or so into marriage, was living in Australia and had specially come to take part in the protests.

At Ghazipur border, a large crowd gathered round the Kisan Ekta Morcha stage repeating the name of Waheguru in unison. One more shaheed had been added to ranks of martyrs.

The police had not been friendly as the farmers in Tikri had hoped, even though the decision to let the farmers into Delhi had been taken by the MHA. The youth had been reckless as they stormed the capital. But the farmers will continue their fight, as the Mathura farmers reiterated. The authorities have started arresting people and the FIRs have been lodged against some of the leaders such as Darshan Pal and Rakesh Tikait. It remains to be seen how the movement progresses from here on. However, one thing is sure – matters would not have come to this had the government been sincere about addressing farmers’ concerns.