Despite the fact that the government is adamant about its stance, farmers still remain as resolute as ever before. Along the way, a number of stories of camaraderie and brotherhood are unfolding. 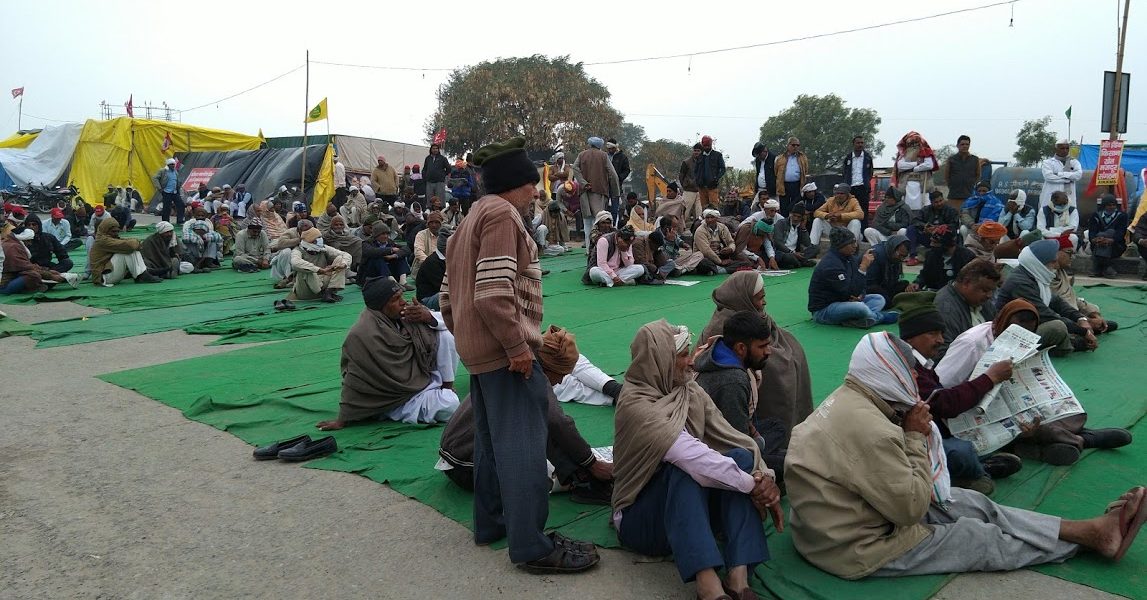 On January 26, Republic Day – which marks the day when the constitution of India came into effect in 1950 –  hundreds of thousands of farmers will have camped two months on Delhi borders. Having spent two weeks in their company at Tikri, Singhu, Shahjahanpur, Ghazipur and Rewari borders recently, I found myself praying for them, especially during the cold winter nights, even though I am not particularly a religious person.

Perhaps this is because prayer is a plea to a higher power urging it to “please look after them” (especially since the earthly powers-that-be have abandoned them). Perhaps also because there is something heartbreaking and equally inspiring about the sight of men, women and children choosing to pitch tents outside the capital city of their own country because the government will not allow them to enter it.

If democracy is government “of the people, by the people and for the people,” one is left wondering exactly which set of people this particular government belongs to, for it most certainly does not seem to be of, by or for those who have been waiting at the borders of Delhi for the past two months.

Several days amidst them have left me with a strange mix of gratitude and guilt. Gratitude for the opportunity to be around some of the bravest and most clear-thinking people I have ever met, and a pang of guilt because I am acutely aware that I am only a day visitor. I have a warm bed in a warm room to go back to at night. They don’t.

One of the admirable souls is Vikram Singh from Rudrapur, Uttarakhand, who is in charge of Kisan Store No. 2, a large tent pitched right on the Delhi-Meerut highway at the Ghazipur border, containing piles of blankets, quilts, mattresses, socks, tarpaulins, caps, toothbrushes and toothpaste, all donated –basically, everything a protesting farmer might need in the bitter January cold. He has been here since the end of November and plans to stay as long as the protest lasts.

Vikram says that his job is to ensure that the farmers who keep joining their ranks daily from various parts of Uttar Pradesh and elsewhere receive what they need to stay put day after day at the protest sites. It is not an easy task, but knowing that this is a make-or-break situation for the farmers gives him the strength to persevere.

“Sometimes locals from the villages nearby come pretending to be farmers and demand blankets and mattresses,” he discloses. “We have learned to recognise them and we patiently but firmly tell them that these are supplies for those farmers who have come a long way from home to be with us.”

A couple of hundred metres away from Kisan Store No. 2 is a washing machine facility set up by Sardar Jagjeet Singh and his family, from Puranpur, Uttarakhand. This facility operates from 9 am to 3 pm daily. Farmers drop off their dirty laundry, Jagjeet ji notes their mobile numbers down in a notebook and tells them to pick up their washed laundry in half an hour. If they don’t show up in 30 minutes, he calls to remind them.

I notice that the notebook he is using has the title “Justice League” on the cover, with pictures of comic book superheroes on it. I ask him if this was intentional, seeing that the farmers are in a league of their own and fighting for justice too. He smiles at the comparison and tells me that it is just a coincidence.

Jagjeet Singh is clear that his family is not going back till the government repeals the three farm laws. He realises that camping here will probably cost him the next harvest, but says, “We would rather lose one harvest than our whole future.”

Then there is Bharpoor Singh, an elderly farmer in his seventies from Mahendragrah (Haryana), whom I met at the Rewari border protest, about 80 km away from Ghazipur. Sitting quietly on a red durrie with a group of five or six farmers in the middle of a blocked road, reading a newspaper, Bharpoor Singh looks like the archetypal village tau. He only looks up when the farmer sitting next to him starts raising his voice while speaking about the unfairness of the new farm laws.

Bharpoor Singh smiles at him and says, “Mind your blood pressure, friend. You can say the same thing calmly too. In fact, your words will have more weight if you say them calmly.”

He then turns to me and says, “You see? The reason my friend here is losing his temper is because you people in the media are not doing your job. It is your responsibility to listen to us and carry our message to the government and to the people. It is the media that brought the BJP to power. It is the media that helps them win elections. I hold the media responsible for much that is wrong in this country. Hopefully one day the media will also have a change of heart and expose those who have done so much wrong.”

About half-an-hour away from the Rewari protest site is the Shahjahanpur border where thousands of farmers from Rajasthan, Gujarat, Madhya Pradesh, and even Maharashtra are camped. Yogendra Yadav, leader of Swaraj India party and a campaigner for farmers’ rights, who has been camping there with the farmers, has put out an appeal during a Facebook live, asking for water bottles for the people there.

In response, we have brought a taxi full of water bottles, not a lot, we know, but it’s what we could manage. We reach the Shahjahanpur border and see that there are dozens of trucks parked very close to each other, blocking our way to the protest site. Who has parked these trucks in the middle of the highway? (Hint: Not the farmers.) 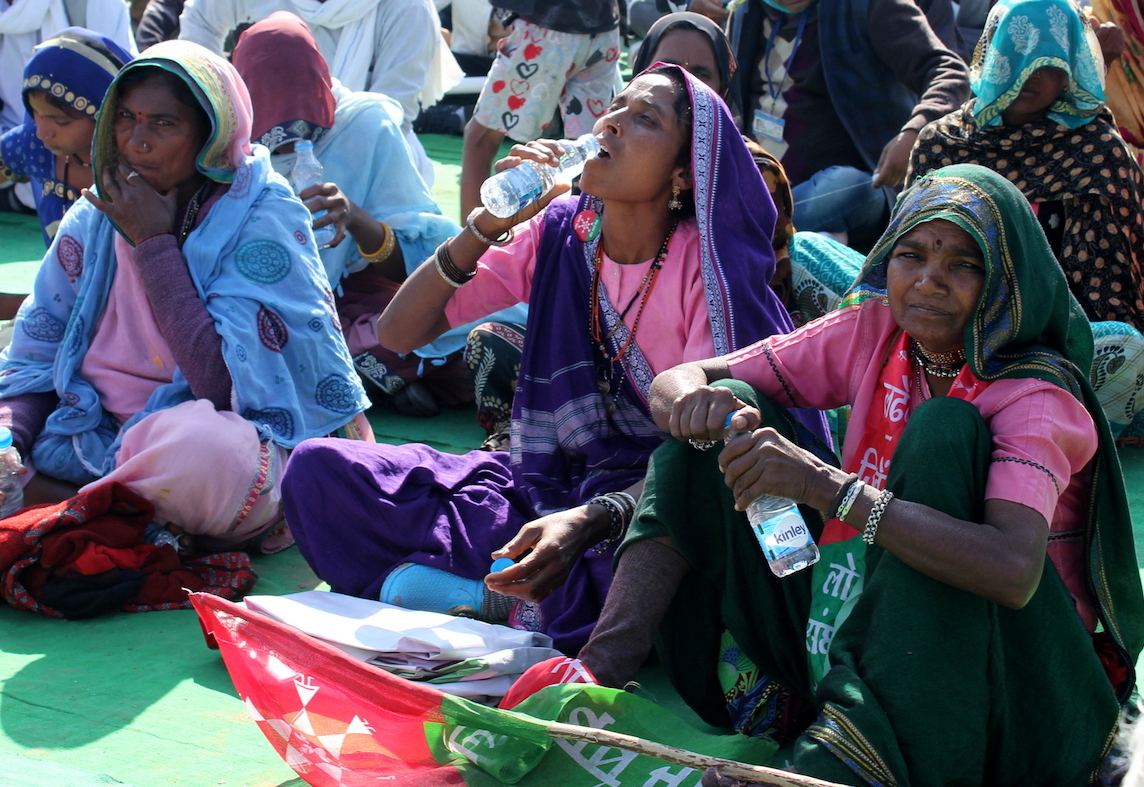 We squeeze through the containers and trucks and walk to the protest site, flanked by gun-wielding security forces, and ask for volunteers to help us carry our water bottles from our taxi across the border. One of the organisers gets on the microphone and asks for five volunteers. About 50 show up. He thanks them all and chooses five, who help us carry the water bottles across. Some volunteers offer bottles of water to members of the paramilitary forces present as well.

There is something surreal about this location. Perhaps it has to do with the gloomy, still, and overcast day. Or, perhaps, it is the sight of hundreds of tractors and tents on a national highway flanked by vast, empty fields.

As I walk down the length of the caravan, I come across Talha, a young mechanical engineering student with a French beard and a big smile. We strike up a conversation. He has come all the way from Nasik, Maharashtra, with other youngsters, students like himself, to support the farmers.

We end up talking about the educational system and how it has a way of driving empathy out of young people. I ask Talha what his experience at the protest has been like.

“It is much better than I thought it would be,” he says. “I thought it would be chaotic and disorganised, but it’s actually very organised. These people here are lovely.  If you go to the langar and ask them for a cup of tea, they won’t let you leave till you have eaten something, too. These farmers look after you. They are genuinely concerned about you.”

I know exactly what he means, for this has been my experience too, at each of the five borders that I have visited over the past month and a half. His friend, Viraj, who has come with him from Nasik, adds, “It is amazing to see the unity and camaraderie here, despite the fact that there are so many groups and organisations present. We have received so much love and hospitality. I have yet to see such unselfishness and unity in a movement.”

Viraj’s words resonate. It is difficult to see the hardships that the protesting farmers are living in, but it is inspiring to be in their presence.

I remember a small incident that took place at the Tikri border on the west of Delhi one wet, rainy, muddy morning a couple of weeks earlier. While I was talking to one of the farmers serving langar, my woolen cap slipped off my head and landed on the ground. As I quickly picked it up and examined a spot of mud on it, an elderly Sikh gentleman standing by smiled and said in Punjabi, “That is sacred mud. Don’t wash it off.” Then he added, “Yeh loktantra ka teerath sthaan hai.” (‘This is a sacred spot for democracy.’)

I have thought about those words a lot. Even as the Modi government does its best to sideline, erase and obliterate the symbols of our democracy (for example, our magnificent Parliament building and many of the iconic structures in its vicinity), five nondescript, dusty borders that people couldn’t wait to zip through have now become the new pilgrimage spots of democracy.

As for the mud on my woollen cap, I still haven’t washed it off. I don’t plan to, either.