In Show of Strength at Barnala Rally, Farmers, Labourers Reiterate Support for Protests

This was one of the first mass mobilisations against the three contentious laws that happened in Punjab after the January 26 chaos. New Delhi: Over two lakh farmers and agricultural labourers gathered at the Barnala grain market in Punjab on February 21 in a massive show of strength against the new agri-marketing laws. This was one of the first mass mobilisations against the laws that happened in Punjab after the January 26 chaos.

The rally was organised by one of the largest farmers’ unions in Punjab – the Bharatiya Kisan Union (Ekta Ugrahan) – along with the Punjab Khet Mazdoor Union. Leaders of the Samyukta Kisan Morcha (SKM) – a group of over 500 farmers’ unions across the country – were also present at the event. A large number of youth organisations, democratic activists, servicemen and other pro-people sections also participated in the rally.

The rally was an attempt by the unions to increase the participation of agricultural labourers in the struggle and highlight the “non-religious character” of the protests.

The largest Mazdoor Kisaan Rally in the history of India by Bharti Kisan Union Ekta Ugrahan and PKMU@Bkuektaugrahan#FarmersMahaRallyBarnala #BkuEktaUgrahan pic.twitter.com/tk0w4oxuf9

Addressing the gathering, Joginder Singh Ugrahan, president of BKU (Ekta-Ugrahan), said, “There is a need to strengthen the non-religious character of this struggle and to protect it from the interference of the opportunist political parties.”

Ugrahan added that the Modi government tried to communalise the current movement but the unity of those participating in it didn’t let that happen. 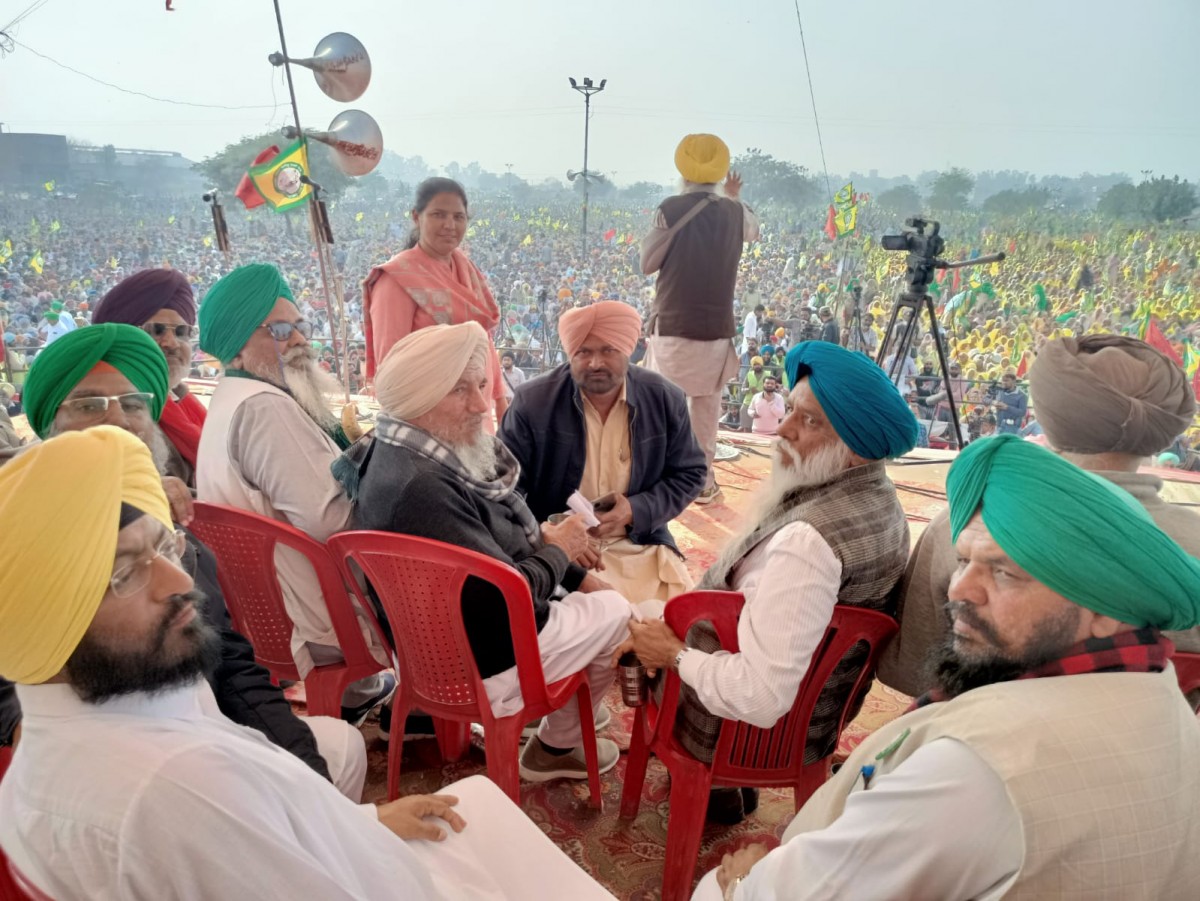 Senior SKM leader Balbir Singh Rajewal called the ongoing farmers’ struggle “historic”. He said that the struggle can only be successful by uniting against the BJP and its corporate nexus. He stressed on the unity between different castes, religions and regions of this country.

“This attack, aimed at ending the public distribution system, is part of a greater imperialist attack on the food security of our country, which has been advanced under the policies of economic reforms directed by imperialist organisations,” Sewewala said.

Also read: ‘Happened in US 40 Years Ago’: 87 US Farmers’ Unions Speak Out for Indian Farmers’ Protest

Highlighting the role of women in the struggle, the women’s-wing leader of BKU (Ekta- Ugrahan) Harinder Bindu said that the agricultural labourers and women farmers are a powerful section of this struggle and that their unity is necessary to make it succeed.

From the stage, she also called for the release of 21-year-old climate activist Disha Ravi and 23-year-old Dalit rights activist Nodeep Kaur who have been held in prison for participating in the farmers’ movement in different ways.

Hinting at the independent nature of the farmers’ protest and slamming the Punjab Congress government, Jhanda Singh Jethuke, the state vice-president of BKU (Ekta-Ugrahan), said that the Punjab government should fulfil its promise to repeal the Contractual Farming Act implemented by the Badal government. He added that the Punjab government should also restrain itself from introducing anything similar to the new farm laws. He stressed that the anti-farmer amendments made to the APMC act in 2017 should also be revoked. In addition, he demanded that the contracts with private thermal power companies should be quashed, and the promise to abolish the debt of farmers and labourers be implemented.

Strengthening the struggle against the laws, the SKM has also released a calendar of events which will be held this month as part of its mobilisation for the movement.

Remembering the peasant struggle under Sardar Ajit Singh, a ‘Pagdi Sambhal Diwas’ will be celebrated on February 23 at all protest sites. The peasant movement of 1907, with which the song Pagdi Sambhal Jatta was associated, had faced repression from the British government at the time. Equating the muzzling of dissent by the British and the present Modi government, the farmers will celebrate the struggle of Sardar Ajit Singh.

On February 24, a ‘Daman Virodhi Diwas’ will be held at the protest sites where farmers and citizens will protest against repressive tactics of the government. On this day, a memorandum will be given to the president of India via tehsil and district headquarters.

On February 26, honouring the contribution of the youth in this movement, a ‘Yuwa Kisan Diwas’ will be organised, and on February 27, on Guru Ravidas Jayanti and martyrdom day of Shaheed Chandrasekhar Azad, ‘Kisan Majdoor Ekta Diwas’ will be celebrated.