The indefinite strike against the Centre's farm laws starting November 26 is a coming together of at least 420 farmers organisations nationwide. 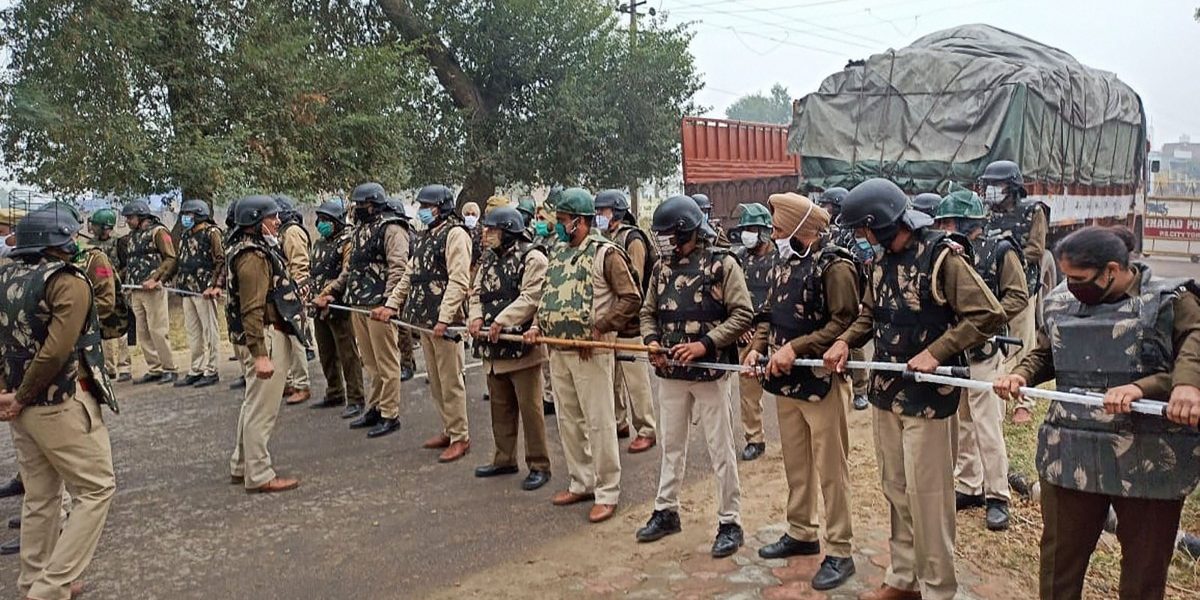 Mohali: Over two lakh farmers and members of trade unions, student organisations and artiste collectives from across the country have started mobilising for the march towards New Delhi to mark their protest against the three recent farm laws passed by the BJP government at the Centre in September this year in a rushed manner.

According to sources, at least 100 farm union members, especially in Haryana have already been arrested. Around 500 farmers have been arrested in Tamil Nadu and Karnataka. Prominent farmer leaders Rishipal Ambawata and P. Ayyakannu have also been placed under house arrest by the administration.

The largest groups of protesters are marching from Punjab, Haryana, Uttarakhand and Uttar Pradesh. Protestors who manage to enter Delhi despite heavy barricading by the Delhi, Haryana and the Uttar Pradesh police from all sides, plan to set up indefinite protests sites wherever they can. Those who will not be allowed to cross the border will set up stages and tents on the outskirts of the national capital.

According to media reports, the Karnal deputy commissioner has imposed Section 144 in the area to stop farmers from marching towards Delhi. After crossing the barricades at Ambala, hundreds of farmers faced water cannons at Kurukshetra.

“More than two lakh people will be joining from Punjab,” Joginder Singh Urgahan of the Bharatiya Kisan Union Ekta (Ugrahan) told The Wire.

Protestors  from Punjab are moving towards Delhi in tractors and trolleys along with rations, tents, stage set-ups, speakers and everything else they can carry to show their anger against the Centre.

“More than 26,000 women are going to be part of these indefinite strikes,” said Harinder Bindu of the BKU (Ugrahan), who has been mobilising women in village after village in Punjab these past few weeks.  Entire families, along with children and  all cooking essentials have been stocked, Bindu said.

Protesting women, some of whom are farmers, some daily-wage workers and some who are widows of farmers who died by suicide, are all marching to New Delhi to show their anger Centre’s policies. In the last few days, most of these women have crowdsourced ration from various households in different villages to take with them to New  Delhi.

From Punjab, artist groups are also all set to stage plays and sing songs at protest sites, wherever they can. Amolak Singh of the Punjab Lok Sabhyachaar Manch told The Wire that street plays and protest songs will be sung. He said that over two dozen artists are going to be performing and they are carrying everything that they need with them.

The Punjab Lok  Sabhyachar Manch is one of the many artist groups which has been actively participating in the protest against the farm laws in Punjab. Over the past few weeks, they have been taking out traditional ‘jaago’, or night rallies, singing protest songs and urging people to join them in the movement. 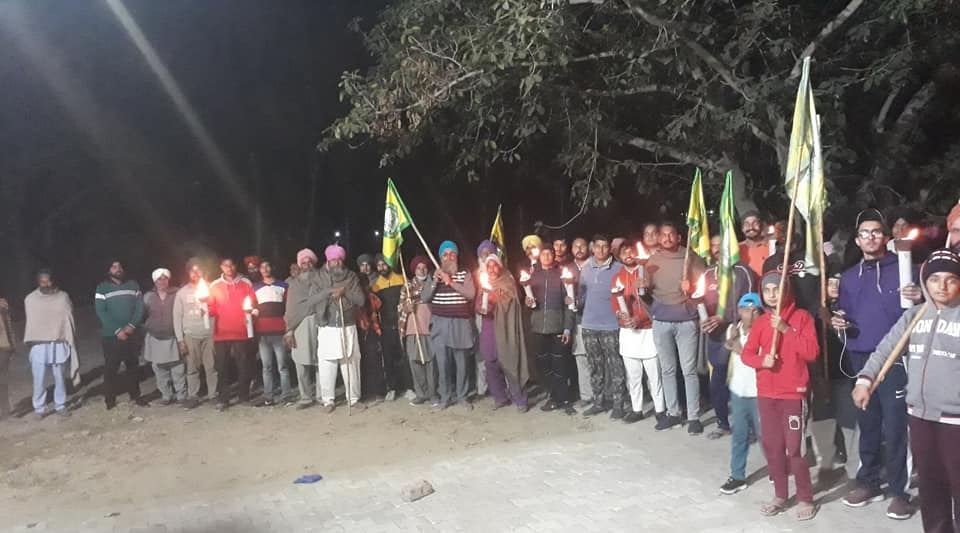 ‘Jaago’: a night march being carried out in Punjab. Photo: Special arrangement

Abhimanyu Kohar of the Rashtriya Kisan Morcha told The Wire that the protestors are very determined. He confirmed that around 1,000 protests have already arrived at the Majnu Ka Tila Gurudwara in New Delhi.

“We will now decide where set-up our camp – at Rajghat or at Jantar Mantar, we don’t know”, he said.

According to Kohar, the Jabalpur Festival Express train, in which many protestors were travelling to Delhi from Madhya Pradesh, has been cancelled by the administration.

From the south of India, many farmers are on their way in trains. Kavitha Kuruganthi, the national working group member of the All India Kisan Sangharsh Committee (AIKSCC), told The Wire that farm union leaders from Karnataka, Tamil Nadu and Kerala are on their way in the hundreds but because lack of public transportation due to coronavirus, many protests are being mobilied locally to show support.

Kuruganthi said that in Tamil Nadu around 500 protests will be held, blocking rail tracks and roads. In Jharkhand, protestors plan to occupy the governor’s house. In Karnataka, ‘Graameen Harthal’, or village strikes will be taking place. In West Bengal also farmers’ unions will be mobilising locally. 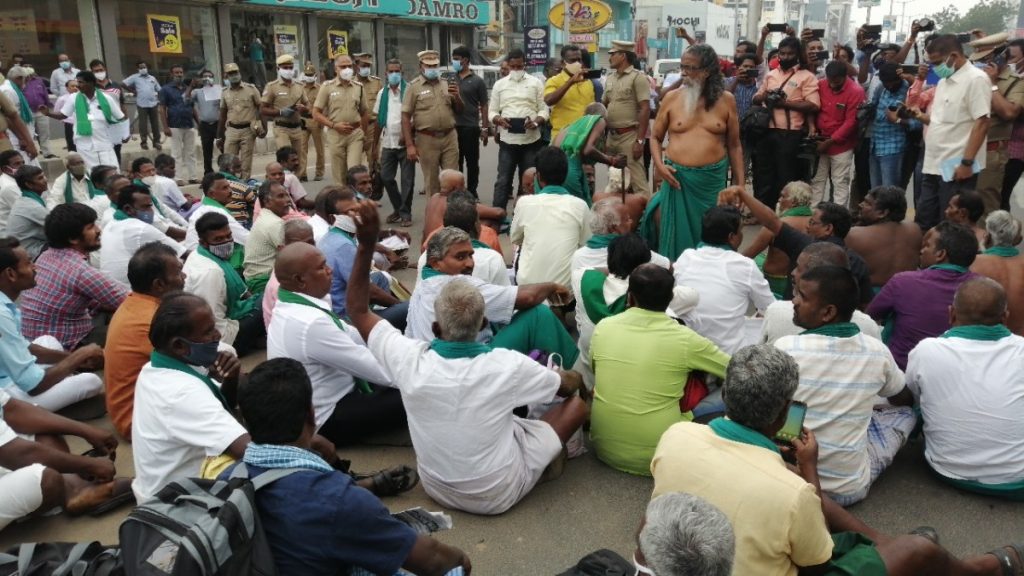 From Madhya Pradesh, activist Medha Patkar is on the way with over 200 farmers and daily-wage workers. “We  are on our way, all of us, more people will join as we go,” she told The Wire in a brief, patchy telephone conversation.

From Uttarakhand, the chief of the Tarai Kisan Union, Tejinder Singh Virk told The Wire that 300 trolleys and tractors will  start on the morning of November 26.

Virk said that in the neighbouring state of Uttar Pradesh, most farmers are not being allowed to mobilise or gather and many farm union leaders are being sent notices.

Kavita Kuruganthi also said that in Uttar Pradesh, the printing of  pamphlets and leaflets about the protest is also being stopped at many places.

The indefinite strike against the Centre’s farm laws starting November 26 is a coming together of at least 420 farmers organisations nationwide. The protest is happening under the banner of Sanyukt Kisan Morcha.