Where mobs flail to a tune set into motion by some dog-whistle, refuse reasoned debate, take recourse to abuse, vilification, threat, and finally, the strong arm, democratic mass actions bank on the power of knowledge. 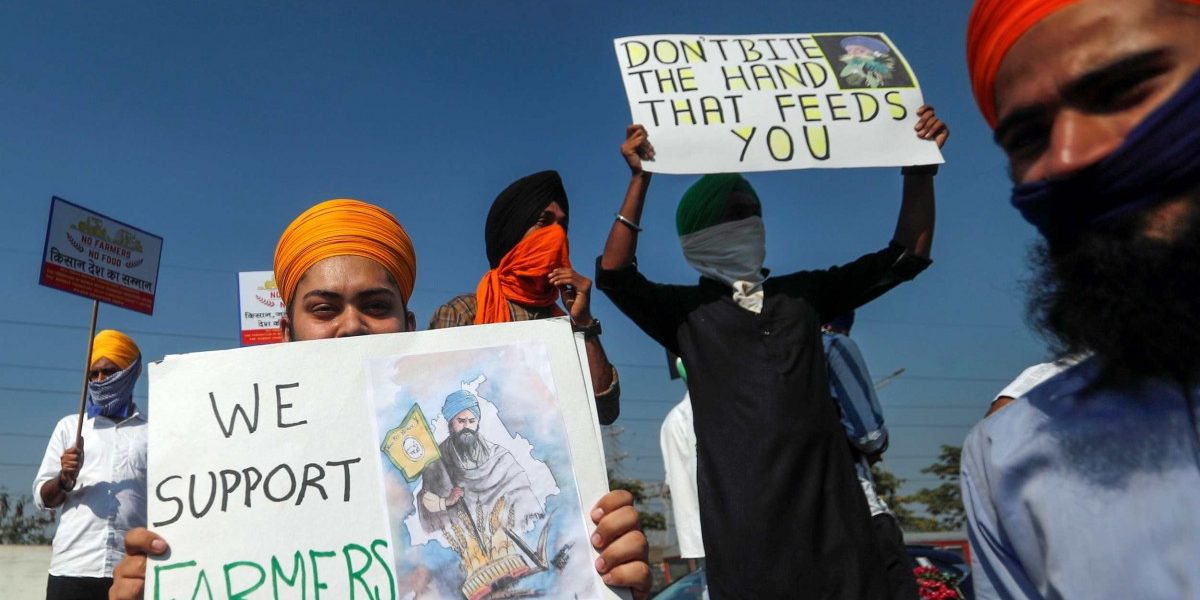 Haven’t we experienced repeated episodes of bigoted mob action over the last some years?

Thankfully, the historic agitation by India’s farming community has provided a redolent lesson in how democratic mass actions differ from mob actions.

Here are some salient points of demarcation between the two forms of public intervention in the nation’s policy formation.

The farmers have shown that in order to be truly democratic in content and purpose, all members and constituents of a collective must be as well-informed about the contested issue as the leadership of the collective. Innumerable individual participants in the farmers agitation who have been quizzed by the media over the last two momentous weeks have unfalteringly demonstrated a cool and comprehensive understanding of the what the impugned farm laws mean, in letter and between the lines. Indeed, their commentaries have been imbued with a deep grasp of agricultural policy in India since the crisis of the 1960s, and the beginning of the “green revolution” – acute enough to have taught “literate” urbanites a thing or two in the matter.

As in the case of the agitation against the Citizenship (Amendment) Act, every single farm protester who has spoken into the camera has demonstrated why a truly democratic movement may not be fibbed off by the customary ploys that the state routinely sets into motion to weaken or deflect such a movement.

Where mobs flail to a tune or a slogan set into motion by some dog-whistle, refuse reasoned debate, take recourse to abuse, vilification, threat, and finally, the strong arm, democratic mass actions bank most trustfully on the power of knowledge and a reasoned articulation of that knowledge.

Thanks are therefore due to our farmers for having been assiduous students of agricultural histories and intricacies of life off the land, and then for having shown us how good teachers must use their power of persuasion from a standpoint of steady and confident grasp of issues.

Most fundamentally, a democratic mass movement such as the one now on teaches us how a recourse to violent action is often sourced in a shallow ignorance of what is involved in historical contentions, and how the power of argument and analysis is always a more dependable and lasting source of transformation in history, after all the killings have done their worst.

Secondly, where the keys that turn the wheels of mob action usually lie hidden, democratic mass actions of the sort now in progress draw their strength from organisational structures and procedures that are transparent and equitous. From the least human requirement to the most sophisticated, our farmers have displayed a richness of understanding and managerial prowess that might put any boastful corporate to shame. At the borders, all the way to Rohtak, little townships are named after momentous participants in India’s agri-history and democratic career; ingenious ways are on sight to provide power to young boys and girls so they may be able to carry on with their studies; the system of food procurement, of cooking meals, and of distribution across hundreds of thousands of the collective is truly enough to put any comparable government scheme to shame. All that without the least loss of temper, or testy excess.

Also read: ‘It’s Time We Speak up For Each Other’: Farmers’ Group Supports Political Prisoners

And once again, after the movement against the CAA, we see how democratic movements attract to themselves the best humanist talents from diverse fields of creative endeavour, inspiring singers, painters, storytellers to give the best of their value to a common and just human cause, and be in turn recharged with a faith in the ability of ordinary citizens to rise to heights of reason and resolve in peace, amity, and without ill will towards the antagonist. None of which is ever palatable to a mob.

And, because democratic mass actions are driven by caring and not by forms of blind hate, in the very thick of their action they remain mindful of the right of others whose urgency of needs are given due space and regard, whereas mobs tend to see them as anti-national enemies deserving to be brought into subjugation with mainforce. 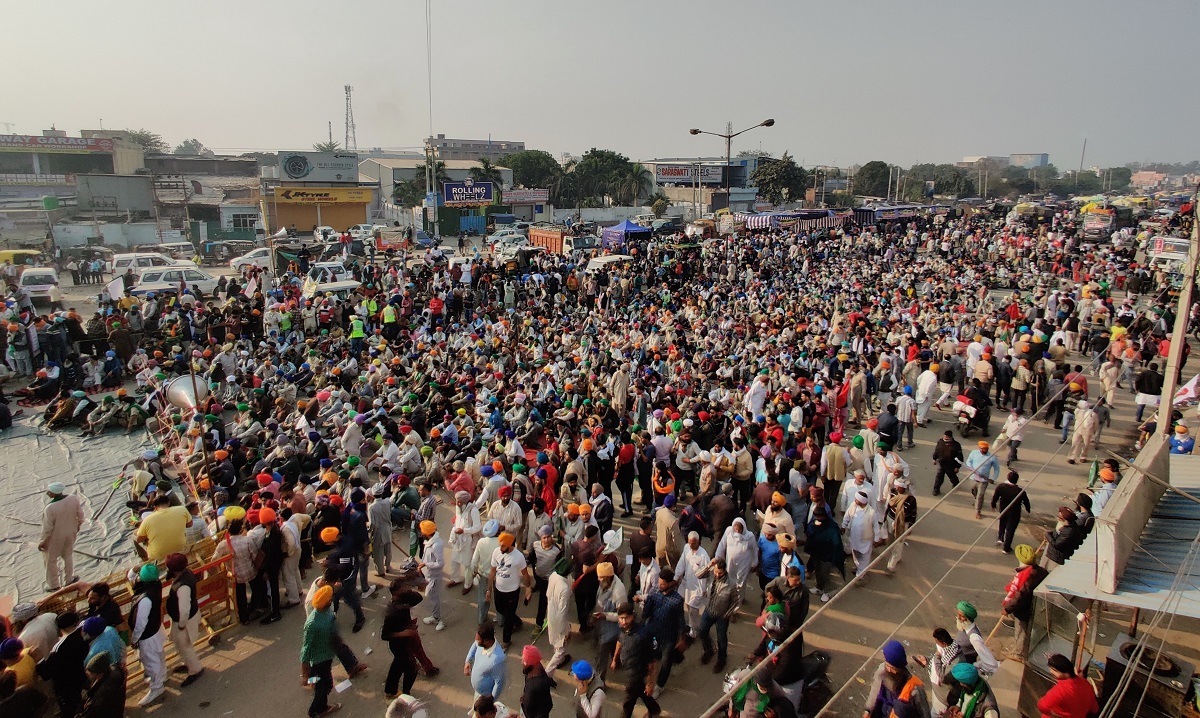 As in the case of the erstwhile mass democratic opposition to the CAA, the farmers’ agitation has yet again shown how a democratic movement rejects valuations based on social or religious identity, and uncompromisingly adheres to the principle of citizenship as enshrined in the constitution.

Thus, as at the time of the CAA episode, women, men, boys and girls of all communities and denominations jostle together in the exhilarating atmosphere of human oneness. The great lesson from this is again how only truly democratic mindsets and modes of collective action can simultaneously also be truly secular and gender-neural.

Not the stuff which mobs are made of.

Regardless, therefore, of what may be the concrete outcomes from the current mass action by India’s farmers – and, we can be sure, these will be substantial – our farmers, often snootily dismissed as superstitious ignoramuses, have resurrected for us a forgotten experience of the normative course of democratic political life after recent years of repressive governance that has indubitably encouraged not democratic forms of discourse and assertion but congenial mob actions.

For this the republic will again be resuscitated and readied to counter forms of authority that do not take their cue from the genius of democracy but from precipitate interests of a sectarian kind – all in the name of efficiency. Think that just the other day the CEO of the policy forum, NITI Ayog, should have unabashedly complained that things do not get done in India because “we are too much of a democracy”.

Watch: As Farmers Plan to Intensify Protest, What Will Be the Next Step?

In the present instance, however, it can be forcefully argued that the farmers’ agitation has resulted because there was too little democracy informing the government’s unwise decision to hasten through the legislation in question.

The government has not explained why it needed to take the Ordinance route for this purpose , since Ordinances, as per the constitution, may be brought only in matters of great urgency. The decision did not involve any discussion or consultation even with the government’s own allies, not to speak of farmers’ organisations; the suggestion that the bills be sent to a standing committee was turned down; hardly any debate took place in parliament. Those that asked for greater consultative procedures were suspended from the House, and those that asked for a division on the question – something that the speaker/vice-chairman are bound to grant – were denied, and a ruckus-infested so-called voice vote was employed to “pass” the legislation.

So, not too much democracy, but too little has been the culprit.

Also, as the Indian Express correctly underscores editorially, it is a merely a thesis that only strong governments produce economic growth. The fact is that it was the coalition era before 2014 that produced the most momentous reforms, consistently high growth rates, and that pulled millions out of poverty.

Whereas the government had intended to slip through this most far-reaching recasting of Indian agricultural life by a sleight-of-hand in the middle of a pandemic, an outraged and informed mass of farmers surfaced to contest the measure.

Given that this government tends to be inflexibly strong on behalf of the interests close to its heart – be they cultural, economic or political – it may not find it within its ideological resource to see reason and yield to the extraordinarily sure-footed will of the farmers whom it never consulted, and who are saying, “Thank you, we can do without this bonanza.”

The farmers, on the other side, know that the sort of resistance they have mounted – a watershed moment in the history of the last few decades – cannot be allowed to be dissipated, nor can be replicated at any time soon.

Nor may they be blamed if they find droves of organisations – of workers, NGOs, political parties, opinion-makers of repute, even middle-class-oriented RWAs, parents’ organisations etc. – recognising the justice of their cause and coming to their side.

Having turned down the government’s disingenuous offer to amend the existing laws, and to diversify and intensify their democratic resistance to the measure, the nation will watch and see whether some high-minded prudence informs the government’s further handling of the situation, or whether, closer to its genius, it chooses to resort to strong-arm methods that have thus far failed to yield results desired by it.

The agitating farmers must also prepare themselves for the likely eventuality that some media channels that have thus far supported their cause, or, at the least, projected it with some fair balance, will find themselves singing the corporate tune more and more in the name of public order and national security.

A government that tends to defer more to isolated vigilante interventions on issues of its liking than to mass actions, however peaceful, constitutional, and democratic, which contest its doings may be facing a new test. And its handling of that test may impinge importantly on the future course of Indian democracy itself.

As we write, news comes of a young protester losing his life to the bitter cold.

Clearly, the movement is beginning also to gather its martyrs, a reality that cannot but refurbish its resolve to not let such sacrifices go in vain.