The BJP-JJP government in Haryana is facing criticism for the brutal lathi-charge on farmers. The opposition has demanded a judicial probe. 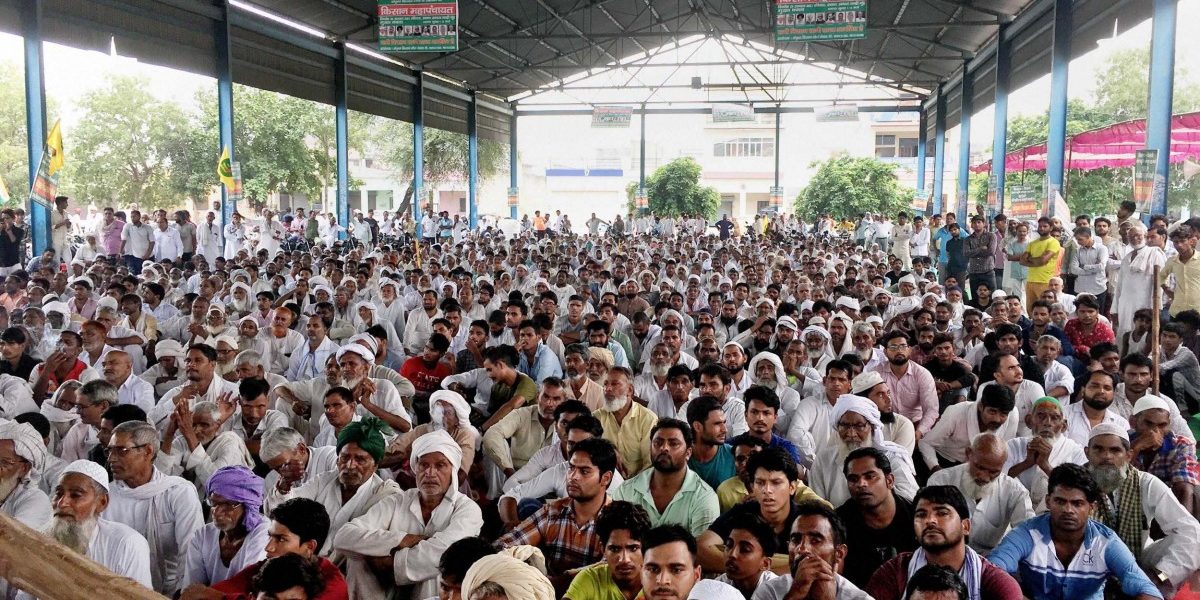 New Delhi: The Manohar Lal Khattar government in Haryana on Sunday convened an emergency meeting of ministers and senior officials to discuss the situation arising out of the lathi-charge on farmers protesting against a Bharatiya Janata Party meeting in Karnal on Saturday.

The government went into a huddle as some farmers’ groups claimed that one person was also killed in the police lathi-charge. The Akhil Bharatiya Kisan Mazdoor Sabha claimed that the man, identified as Sushil Kajal, a resident of Rampur Jata village, was injured in the violence and succumbed to his injuries.

The BJP government in the state has come under severe criticism from all quarters and is facing the threat of renewed protests from angry farmers after a video surfaced showing the area sub-divisional magistrate, Ayush Sinha, directing cops to crack the skulls of those trying to breach the barricades put up around the meeting venue.

In the video, which was shared by several prominent citizens, Sinha was seen telling a group of police personnel that they should smash the heads of those trying to cross the barricade and that there need not be any further instruction on this. “Sar phod do (Smash their heads),” he was heard telling the police.

When confronted by mediapersons about his directions, Sinha did not deny his saying so and added that he only acted in accordance with provisions of the Code of Criminal Procedure.

The video, as well as the fact that a large number of farmers sustained serious injuries as the police lathi-charged them to prevent them from reaching the Prem Plaza Hotel (venue of the BJP meeting), where chief minister Khattar and state BJP president Om Prakash Dhankar and other senior leaders of the party were present, has now caused a great deal of embarrassment and consternation in the government.

Farmers were beaten up 15 km from meeting venue

The police took on the farmers at the Bastara toll plaza, about 15 km from the venue, as they headed towards the hotel. The brutal attack on the farmers by the police was recorded and widely shared on social media, leading to more protests across the state.

Following the incident, farmers came out on several state and national highways and stopped traffic movement. The roads on which traffic flow was disrupted included the Ambala-Chandigarh and Hisar-Chandigarh national highways, and the Fatehabad-Chandigarh, Gohana-Panipat and the Jind-Patiala highways.

However, Khattar defended the police action, saying the farmers should have protested peacefully. “Putting obstruction in official work is against democracy. If the protesters wanted to protest, they should have done it peacefully,” he said.

Meanwhile, Shiromani Akali Dal leader Manjinder Singh Sirsa today demanded that cases of murder be registered against the SDM and other government officials responsible for the attack on the farmers.

The Congress has also called for a judicial inquiry into the incident. Congress president Rahul Gandhi tweeted that the head of the nation hangs in shame as blood of the farmers has been shed.

On the other hand former Haryana chief minister Bhupinder Singh Hooda called a press conference to discuss the lathi-charge on the farmers in which he criticised the police action. “We condemn the violence against the farmers and demand a judicial enquiry into the incident,” he said.

Hooda insisted that use of the ‘lathi’ or cane was not the solution to any problem. “How an officer issued such directions needs to be probed.” He also questioned how an administrative official could issue such direct instructions to the cops when that was the sole prerogative of the police officers.

Meanwhile, the Samyukt Kisan Morcha has also called for a Bharat Bandh over the issue on September 25. The organisation leaders said this time they would constitute units in all villages and tehsils to strengthen the movement and to ensure a wider participation of farmers in the agitation, which has been on since November 25, 2020, when the Centre passed the three controversial farm laws.

Meanwhile, trying to shift the blame away from the government, Jannayak Janata Party leader and Haryana deputy chief minister Dushyant Chautala assured action against SDM Sinha. He insisted that it was wrong on behalf of the official to issue such directions to the police.