The eighth round of talks are scheduled for January 8, 2021 – something protesters find particularly cruel considering that farmers are out in the cold and rain. 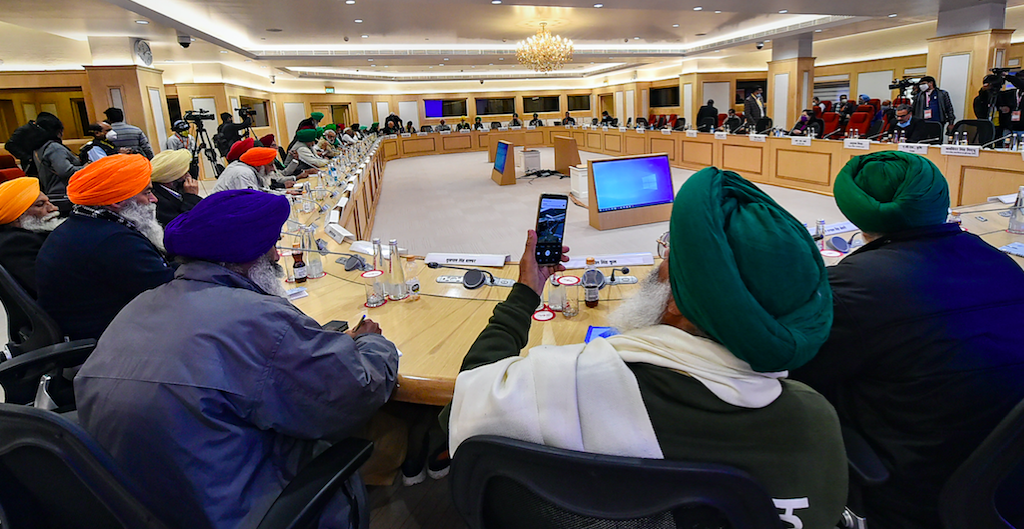 Mohali: The seventh round of talks between farmers’ unions and the Centre failed to end the stalemate on Monday on the repeal of three farm laws and to enact legal provisions to ensure minimum support price (MSP).

Agriculture Minister Narendra Singh Tomar said he remains hopeful of a solution in the next meeting on January 8, but asserted that efforts need to be made from both sides for a solution to be reached, “Taali dono haaton se bajti hai.”

He also said no outcome could be reached in today’s meeting as farmer leaders remained adamant on one issue of repeal of the laws, but the government wanted a clause-wise discussion on the legislations to take forward the talks.

Farmer leaders, however, alleged that it was the government’s “ego problem” that was coming in the way of resolving the issues.

According to The Wire‘s sources, union leaders began the meeting by paying a silent tribute to around 55 protesters who have lost their lives during the sit-in morchas, going on at the five borders of New Delhi.

During the meeting, farmers’ unions tabled their agenda around the repeal of the laws but their standoff with the government on this contentious issue continued.

Another key demand of farmers for a legal guarantee to the MSP procurement system barely came up for discussion.

At the end of the meeting, the government officials told the unions that they will carry out consultations internally and then get back to the agitating unions on January 8, 2021.

Speaking to The Wire, Pratibha Shinde, a member of the All India Kisan Sangharsh Coordination Committee, who was part of the meeting, said that scheduling eight rounds of talks was “unfortunate”. Shinde has been camping at the Shajahanpur border with lakhs of farmers and agricultural labourers from Maharashtra and Madhya Pradesh for weeks now.

“It is unfortunate that another round of discussions have been scheduled for this. While lakhs of farmers are sitting on highways in the biting north Indian winter, the government is not ready to let go of its pro-corporate stand on these reforms.”

She added that the farmers are actively preparing for the kisan (farmers’) tractor parade which will be held alongside the Republic Day parade in the presence of United Kingdom prime minister Boris Johnson.

Last week, the protesting farmers issued an “ultimatum” to the government and said that they will march into Delhi with a ‘tractor parade’ on Republic Day if their demands are not met.

Addressing a press conference, union leaders had said the time had come for “decisive” action as their demands for a repeal of the three agriculture laws and a legal guarantee for MSP were not addressed by the government.

On December 30, the Centre and farmers’ unions reached common ground to resolve protesting farmers’ concerns over the rise in power tariff and penalties for stubble burning.

The Centre had agreed to exclude farmers from the law to curb pollution, the Commission for Air Quality Management in the National Capital Region and Adjoining Areas Ordinance, 2020.

Meanwhile, inconclusive meetings, the winter downpour and water-logging at agitation venues have not deterred the spirit of farmers.