Besides showing farmers' frustration with the government's agricultural policies, the agitations are also resistance against a development model that favours the urban. 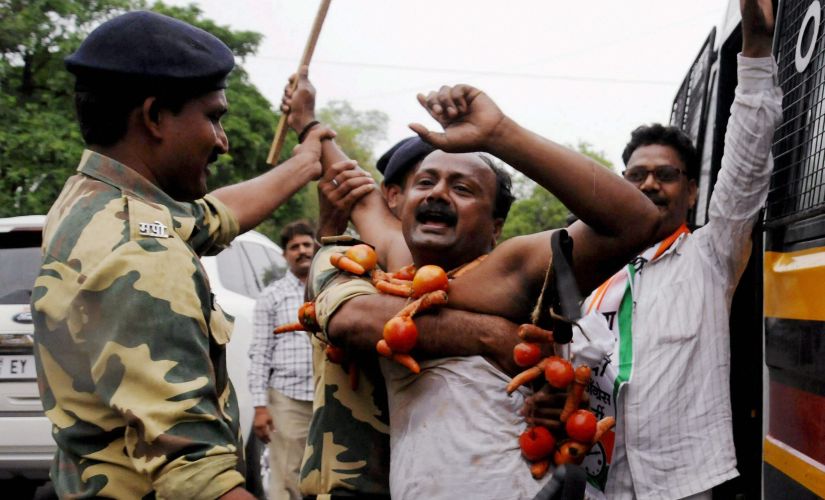 Police detain NCP farmers during a protest as part of their Maharashtra bandh over various demands. Credit: PTI

‘Farmers’ protests’ have once again become a national issue. This time, it is not the suicide of farmers but of assertion and anger expressed on the roads in the cities and challenging the state machinery. If we listen to the videos or read the media reports, various people taking part in these agitations expressed price rise and farm loans as their major concerns and demands. But does that explain the full picture?

I think the crisis is much bigger and these incidents are a smaller manifestation of the situation. The issue is more of an identity assertion than merely of economic benefits. Since the agrarian narrative in India has largely centred around economic problems and it mostly gets articulated on these lines, any emerging political leadership amongst the farmers expresses these similar economic demands. A field analysis of these areas shows that these demands emerge from a much deeper crisis that has more to do with the ‘rural-agrarian’ than merely agricultural. This needs to be understood in the context of, in the words of Dipankar Gupta, the ‘vanishing villages’.

In Maharashtra and Madhya Pradesh, the political leaderships’ attempts to handle the situation have proved counter productive. Instead of resolving the situation, they have resulted in increasing number of protests in both the states. Is this all about loans or economic benefits? Farmers throwing vegetables on a road during a protest as part of the Maharashtra bandh. Credit: PTI

Last month I visited the Vidarbha region in Maharashtra. In Donoda village of District Yavatmal, a group of young men explained to me the cause of their anxiety. After knowing that I was there to study farmer suicides, the response of one was shocking. He declined to tell me his name saying that I would get to know it when he commits suicide. He said, “Sir, take a picture of this person (pointing to the man standing next to him). He is going to commit suicide soon.” I kept listening as he calmly continued. “Sir, take this seriously. He will commit suicide soon and one by one in the next few years we all will.”

I was astonished for a moment. Somehow I gathered my courage and asked him why he was so pessimistic. He explained: “We all are graduates. We didn’t get a job after completing our education. By the time we finished our degrees, there were no jobs, even if there were, one needs to pay heavy amount to purchase a job position by selling land. We decided to continue with agriculture and live in the village. Now we are into agriculture with three-four acres of land. This land is not enough for our survival. Hence, no farmer wants their daughters to marry with boys like us. We don’t have wealth, and we live in a village. We are not modern. We all are unmarried though all of us are touching 30. Sir, you tell us, what charm we have in life. Our life is a waste.” He laughed out along with others. I had no answer.

In another instance, I spoke to a 14-year-old in Nagpur. He had just taken the class X exams and was living in Nagpur to take coaching classes for Maharashtra Public Service Commission and Indian Engineering Services entrance exam, and for class XI and class XII math.

I asked him why he had taken on so many things instead of enjoying his vacations at home. He replied: “Sir, we are people from the village. People from the cities think that we are backward. Since we come from a rural background (gaon se aate hain) therefore we don’t know how to live a good life (achha jivan). I want to do good in life. I want to achieve something and want to show these people in cities that we villagers can also progress and do well in our lives. That’s why I am doing so many things in studies now.”

Another man named Pramod is doing his Ph.D. from Nagpur, and he comes from a village in Bhandara district of the Vidarbha region. I asked him whether he would prefer returning to his village, and he replied that he doesn’t see any future in villages. He said, “In rural areas, the condition is worse. It is not merely about economic status. Economically, we can have a decent life in the village as well. But in the cities we have something to show in terms of work (dikhane ke liye kuch to hai) but youth in the rural areas have nothing to hold on to. There are no jobs for the rural youth. Villages are not on the priority list of the government. The government is interested in constructing metro train in Nagpur instead of building schools and hospitals in the villages.”

These narratives speak a different story of the rural-agrarian crisis in general and, largely but not restricted to, of the rural youth from the owner-cultivator classes and intermediary castes in particular. The ongoing agitations in Maharashtra and Madhya Pradesh are also a product of this crisis. Most of the protesters belong to the 30-40 year age group, wearing shirts and shoes, taking pictures and making videos and simultaneously asserting and challenging the government.

There is a series of events which need to be put together to understand this unrest. For example, agitations in Punjab a few years ago, Jat agitation in Haryana a year ago, Patel agitation in Gujarat, or Bhim Army in western Uttar Pradesh, protests by farmers at Jantar Mantar or a farmer hanging himself in front of an agitated crowd at Jantar Mantar and now these protests are all part of the same crisis chain. Largely, these agitations are led by the rural youth who have certain expectations and aspirations for a better life and above all, who have a craving for self-respect irrespective of the attached meaning of self-respect (caste, masculinity, religious identity or economic). 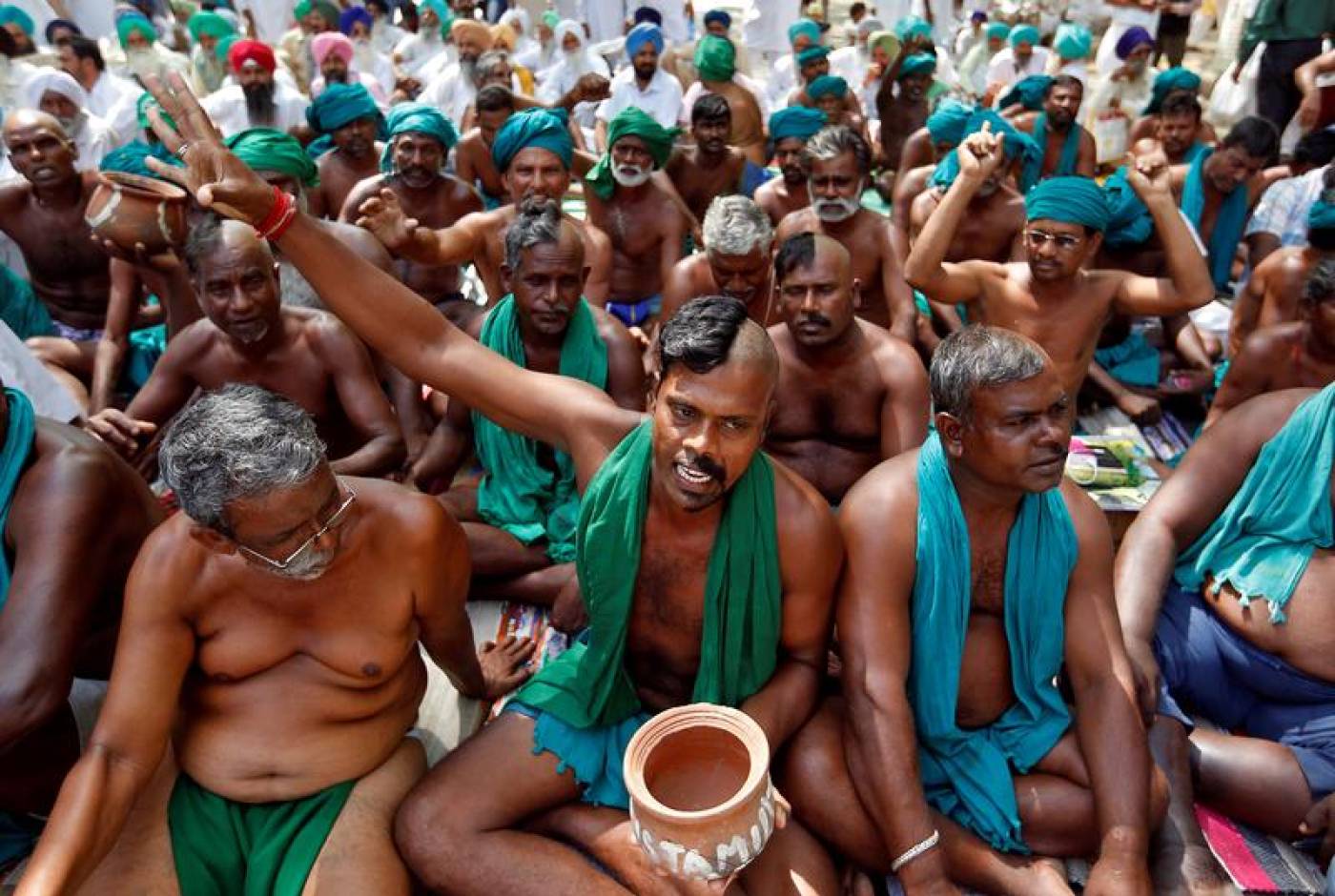 It is not merely farmers’ frustration with the agricultural policies of the government, as it appears prima facie. Rather, it is a culmination of increasing displeasure with the state’s increasing obsession with the urban. Many scholars (like Ashutosh Varshney) have argued that there is a constant concern with the rural in the development discourse in independent India. However, the another fact is that the rural has also witnessed increasing sense of marginalisation, negligence and above all a sense of inferiority vis-a-vis a new urban India.

This can be seen in the remarks of political leaders on farmer suicide. It is also visible in the comments by bank authorities in case of farm loans. A counter-narrative in the rural areas in Maharashtra, Punjab, Bundelkhand or western UP (the areas where I have travelled extensively in the last one decade) is that the villages are kept backward deliberately in order to fulfill the demands of the rising urban India.

Vijay Jawandia, a popular Kisan leader of Vidarbha says that “there is a clear urban bias in the government’s development policies. Government is increasingly giving loans and lands to the industry but refuses to give support to agriculture or spend more in the rural areas. This is done in order to ensure the supply of goods and labour in the urban centres.”

Since there is a lack of coherent political strategy amongst the farmers and also there is an absence of alternative political imagination, we witness a region-wise variance in their political assertion, strategies of political mobilisation and their demands. This crisis is being articulated in different parts of the country in various ways. In some areas it is the demand for reservations or is related to caste assertion, whereas in other places it is in the name of prices or loan waiver. In other words, these incidents are distinct yet interlinked.

Rural in contemporary India is going through an identity crisis and these agitations are a manifestation of this crisis situation. This agitation is a distorted form of resistance against the model of development which is being followed by the Indian state. The political class has to understand this anxiety and address it more sensibly instead of resorting to methods of coercion.