The Farmer Has Bypassed Delhi and That Should Worry the Establishment

Delhi has let down the farmer, and he no longer has any need for India's capital. This is a grave miscalculation on the part of Modi-Shah duo with far-reaching consequences for the BJP.

The irony of this is lost on a government drowning in its testosterone: with every nail-studded barricade installed at Tikri, Ghazipur or Singhu, Delhi is making itself progressively redundant to the ongoing course of events, and perhaps even to the future shape of things in India. A subterranean tsunami is slowly building in the country, and the power elite, the pampered middle class and wheeler-dealers of the capital are blissfully unaware of it.

The farmers do not need Delhi to survive or even to prosper, they are creatures of the soil and the elements, and know how to live in harmony with them. They have been at our borders for almost three months now and have taken nothing from Delhi, except, perhaps water, and the Internet – and a lot of abuse. Now the rulers have stopped even the supply of these essentials, having practiced the art for a long time in Kashmir. But the farmers are unfazed – they now get them in abundance from their villages.

For me, in fact, Narendra Modi’s cat was let out of the bag by an economist friend who (in defence of the farm laws) informed me that rural unemployment on a huge scale was inevitable as a country progressed to “developed nation” status. He sent me some charts to establish the correlation between gross domestic product (GDP) and rural unemployment: the higher the GDP, the higher the unemployment in agricultural communities! This is the neoliberal, International Monetary Fund-cum-World Bank formula which has ensured that 100 of the world’s richest billionaires have more wealth than half the world’s population. Modi’s farm laws will be the Indian version of this formula.

The insidious objective is to create cheap labour for industry and big capital. This is already happening in India – 36 million farmers have left farming between 2004 and 2012, 50 million have been “displaced” by capital projects and 500,000 more are uprooted every year, tribals are being evicted from forests. There are already 120 million migrant labourers. It is a dismal picture but not dismal enough for our politicians and wanna-be billionaires. The farm laws were intended to speed up this process, and the barricades are a statement that the government will enforce them, come hell, high water, Rihanna or Greta Thunberg.

But our sturdy farmers, who are more intelligent than we Dilliwallahs give them credit for, have little interest in the barricades, the concertina wires, the foot-long embedded nails blocking their way to Delhi –  the product of the fear, paranoia, incompetence and malice of those who rule in Delhi. For the farmers have no reason to go to Delhi anymore, after leaving their visiting card there on January 26. 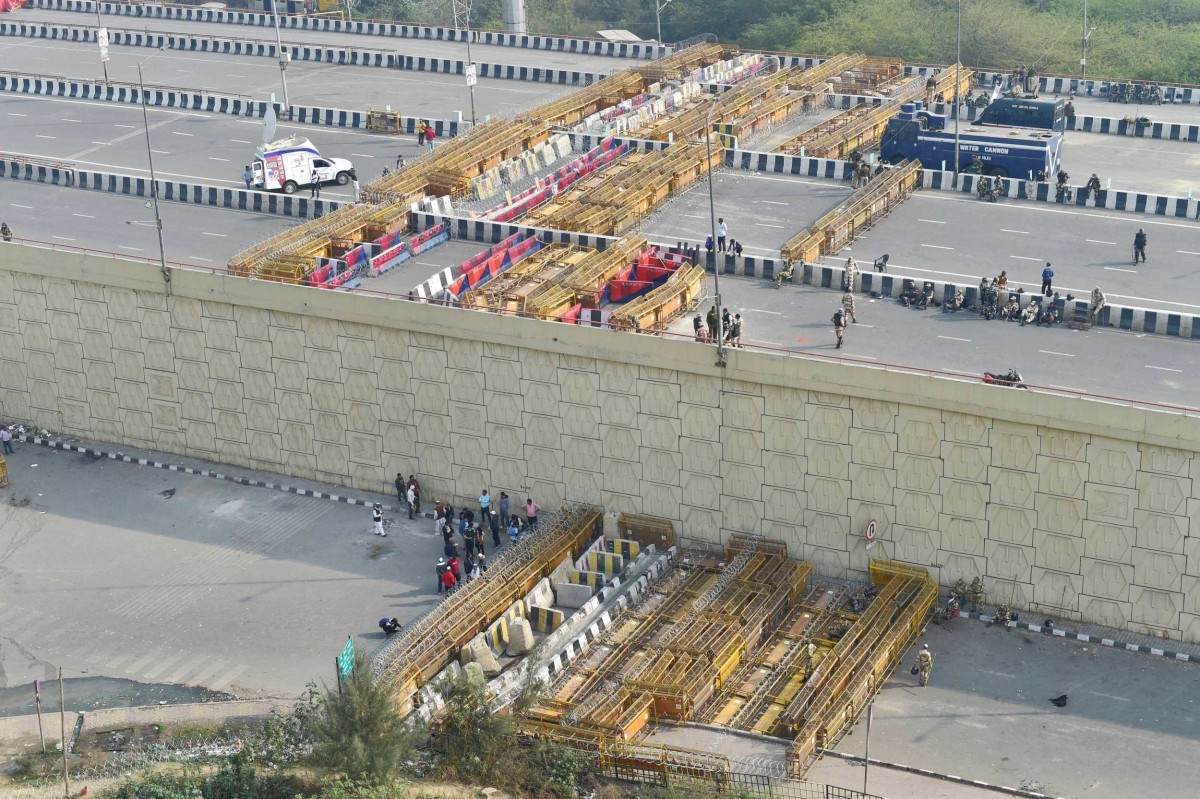 Barricades set up at the Delhi-UP Ghazipur border to stop farmers from marching towards the national capital, during their ongoing agitation against Centre’s farm laws, in New Delhi, Tuesday, Feb. 2, 2021. Photo: PTI/Vijay Verma.

Every institution they appealed to for the last six months has let them down: parliament, the Supreme Court, the media, mainstream political parties, even the wealthy burghers of South Delhi. The lawyers are silent, the veterans are citing discipline as an excuse for their timidity, the celebrities have tucked their heads beneath their tails, the embassies are “watching the situation”, the IMF and World Bank are hopeful that Modi would carry the day. Delhi has let down the farmer, and he no longer has any need for India’s capital – the word “capital” signifying many things.

And so the farmer has decided to ‘Bypass Delhi’ and take it out of the equation: Rakesh Tikait went to Jind to attend a mahapanchayat on February 3; he avoided Delhi and took the longer route via Haryana. The symbolism of this cannot be ignored. And at Jind, he announced that he will now take the protests to other parts of India. This reminds me of two historical events.

One: the Maginot line was built by France on its borders with Germany to deter any invasion by Hitler. It was so heavily fortified that it was considered impregnable. But when the time came, the Germans simply bypassed it and rolled their Panzers through the Ardennes forest into France without any opposition.

Two – I am thankful to Punya Prasun Bajpai for pointing this out in a video – when Mahatma Gandhi saw that he was making no progress with the British in Delhi and Shimla, he decided to head in the opposite direction – to Dandi in Gujarat – to get a pinch of salt. That further helped to spread his message to the rest of India, to universalise it and give it more strength.

BJP shot itself in the foot

By closing off Delhi, literally and figuratively, to the farmers, Modi and Amit Shah may have committed their biggest miscalculation. They have forced Tikait to change his strategy midway. He is doing three things now: one, he has made Western Uttar Pradesh, not Punjab, the hub of the movement. 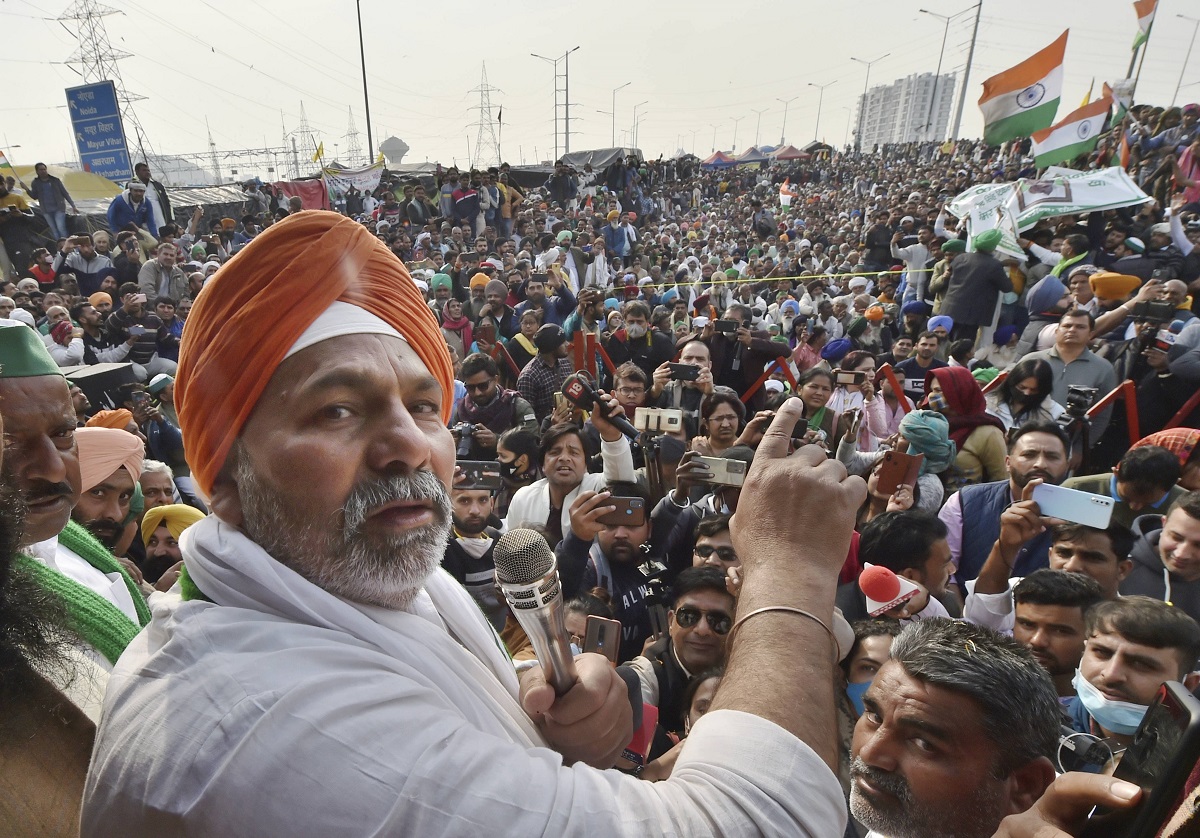 This is the region that enabled the BJP to come to power in the state in 2017, winning more than 100 Vidhan Sabha seats in just this belt. The BJP did so by creating a communal rift (remember the Muzzafarnagar riots?) between the dominant communities here, the Jats and the Muslims. Now, Tikait has healed the rift, united both against the government, and demolished the formula that won BJP western UP.

Two, as the de-facto supremo of the farmers’ movement now, Tikait is more acceptable to the rest of the Hindi (or Hindu) heartland than the earlier Sikh leaders and he will be able to take the protests to the other states – Madhya Pradesh, Rajasthan, Haryana, Uttar Pradesh, Uttarakhand, Himachal, Bihar, Chhattisgarh, Jharkhand – more successfully. This is precisely the belt that allows BJP to win big in parliamentary elections, and the spread of the agitation here does not augur well for it. It would have made more sense for the BJP to have limited the protests to Delhi and its vicinity.

Also read: Watch | Rakesh Tikait: The Man Behind the Revival of the Farmers’ Protest

Third, in India, political parties have always won elections, not on the basis of their track records or manifestos, but on the manipulation of identities – religion, caste, backwardness, region. The BJP has been particularly smart at this.

But the farmers’ movement has now begun to erase these sub-identities in favour of a larger one – the farmer identity (which includes the landless labourer, the artisan, even the village shopkeeper). There will be only one identity now, one concern and one demand. With nothing to divide, the Great Divider will not be able to rule: it was a lesson the British had finally learnt, and the BJP will now learn it the hard way.

The game has changed, but the farmers have made it clear that the rules have not – winner takes all. This rule had been made by an arrogant and over-reaching government and it may just come back to bite it.

The nails on the road at Ghazipur could well be the nails in the BJP’s coffin. The pampered and indifferent upper middle classes of Delhi can now live in peace – the battle has been taken away from them, they no longer count.