Maharashtra, Punjab on the Anvil as Farm Loan Waivers Prove to Be Good Politics

Economists caution that the move could encourage indebted farmers not to repay loans, deepening malaise at public sector banks.

FILE PHOTO: Farmers from the southern state of Tamil Nadu display skulls, who they claim are the remains of Tamil farmers who have committed suicide, during a protest demanding a drought-relief package from the federal government, in New Delhi, India, March 22, 2017. Credit: Reuters/Cathal McNaughton/File Photo 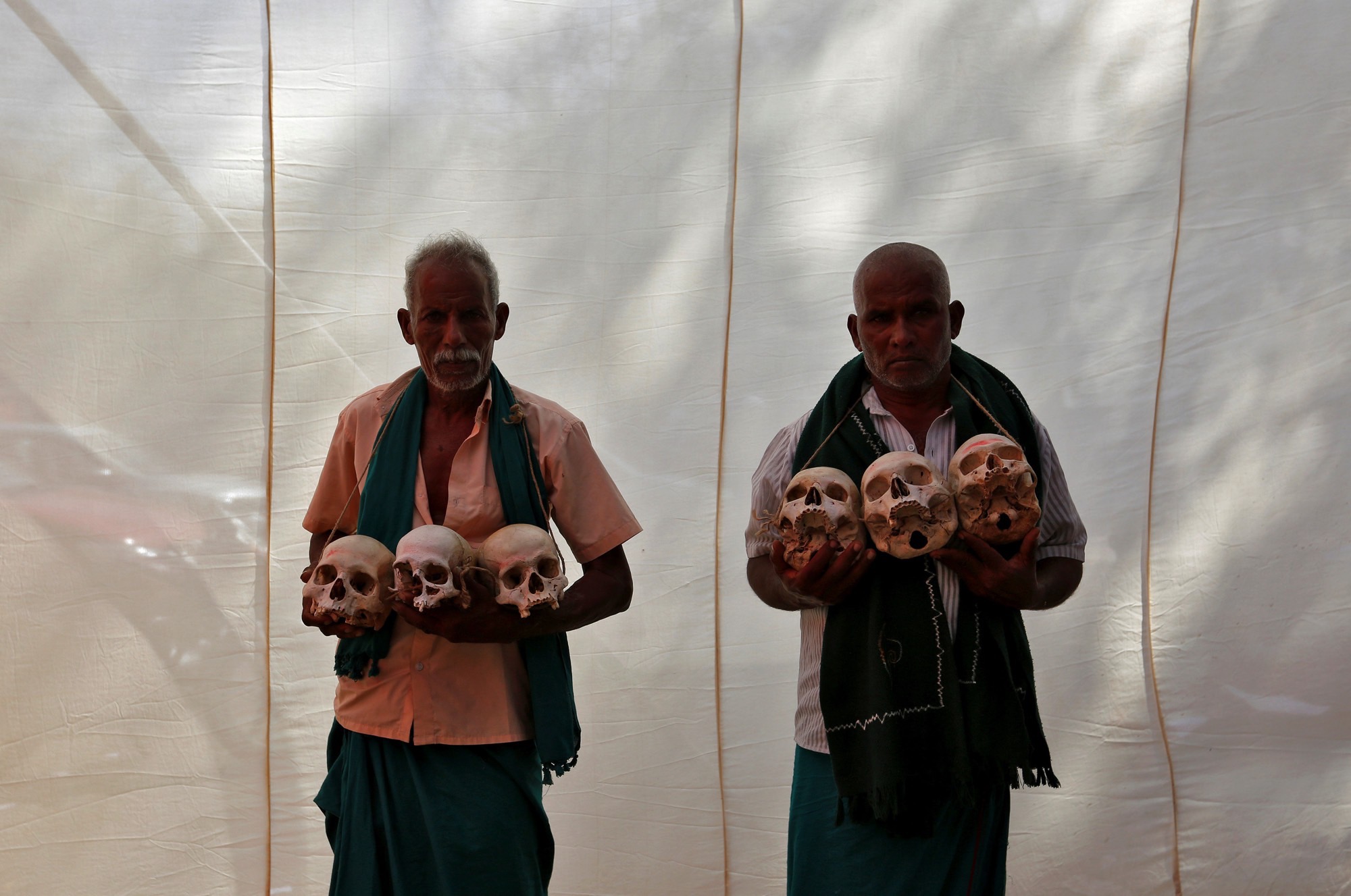 Farmers from the southern state of Tamil Nadu display skulls, who they claim are the remains of Tamil farmers who have committed suicide, during a protest demanding a drought-relief package from the federal government, in New Delhi, India, March 22, 2017. Credit: Reuters/Cathal McNaughton/File Photo

Mumbai/New Delhi: India risks straining public finances and undermining already ailing state banks, economists said, after a $5.6 billion loan write-off for farmers in Uttar Pradesh and moves to do something similar in at least four other states.

One of the first acts of the new government in India‘s most populous state following last month’s election triumph of Prime Minister Narendra Modi’s BJP was to keep a promise to provide debt relief to 21.5 million farmers.

Taking their cue from Uttar Pradesh, more state governments could waive loans to farmers, senior officials there said, to fulfil election pledges or woo rural voters before further polls in the run-up to a general election in 2019 when Modi is expected to run for a second term.

“This will spread like a contagious disease to most parts of the country and you will very soon see at least 3-4 states announcing similar farm loan waivers,” said Ashok Gulati, a farm economist who advised India‘s last government.

Economists caution that the move could encourage indebted farmers not to repay loans, deepening malaise at public sector banks already saddled with most of India‘s $150 billion in stressed loans.

Uttar Pradesh will cover the cost of the waivers by issuing bonds. This would in turn constrain India‘s sovereign credit because such bonds are backstopped by the federal government, the economists said.

India‘s total public sector debt, as a share of gross domestic product, stands at around 66% – high compared to other emerging economies.

Economists at Merrill Lynch estimate that states will end up writing off debts equivalent to 2% of GDP – the bulk of all outstanding loans to farmers. A farmer from the southern state of Tamil Nadu poses as he bites a rat during a protest demanding a drought-relief package from the federal government, in New Delhi, India, March 27, 2017. Credit: Reuters/Cathal McNaughton/File Photo

Ratings agencies would like to see India‘s debt-to-GDP ratio fall below 60% over the next three years to justify an upgrade in its sovereign rating. Yet debt waivers would, even if staggered, force up borrowing, analysts said.

“The loan waivers would likely worsen the fiscal deficits and leverage levels of the state governments, unless other resources are mobilised or expenditure is controlled,” said Aditi Nayar of ICRA, an affiliate of Moody’s Investors Service.

“There is a significant risk that productive capital spending may end up being reduced to fund a portion of the loan waivers.”

The western state of Maharashtra and Punjab in the north are expected to announce similar loan waivers soon, senior officials in both states told Reuters.

In Maharashtra, ruled by the BJP, farmers are clamouring for a bailout after two years of drought and falling commodity prices. In Punjab, known as India‘s grain bowl, the opposition Congress party won last month’s election partly on the promise of a farm loan waiver.

In southern Tamil Nadu, reeling from dry weather, a court asked the state government to write off loans to all farmers.

Farmers from Tamil Nadu recently protested in New Delhi, showing the skulls of neighbours who had committed suicide to press their demand for drought relief and loan write-offs.

Some of India‘s 263 million farmers have decided not to repay their debts, expecting loan waivers to mean they don’t have to.

“I am not going to repay the loan because defaulters benefited from the previous waiver and I didn’t get any government help even as I repaid the loan on time,” said Gorakh Patil, a farmer from Jalgaon in western India.

Patil was referring to an $11 billion national farm loan waiver in 2008 that helped the Congress party-led coalition of the day win re-election the following year. But non-performing assets jumped.

Gross non-performing loans in agriculture and its allied sectors surged to Rs 588 billion at the end of the December quarter, from Rs 97.4 billion in the 2007-08 fiscal year, RBI data shows.

“There’s no benefit from such waivers,” said a director at one state bank who requested anonymity due to the sensitivity of the matter. “If you give any benefit across the board, it definitely has an adverse effect on credit discipline.”