The Protests Against the Farm Laws Present a Familiar Pattern

These “reforms” bear exactly the same stamp of hubris, lack of consultation and foresight that has characterised all the major initiatives taken by the Narendra Modi government in the past six years. 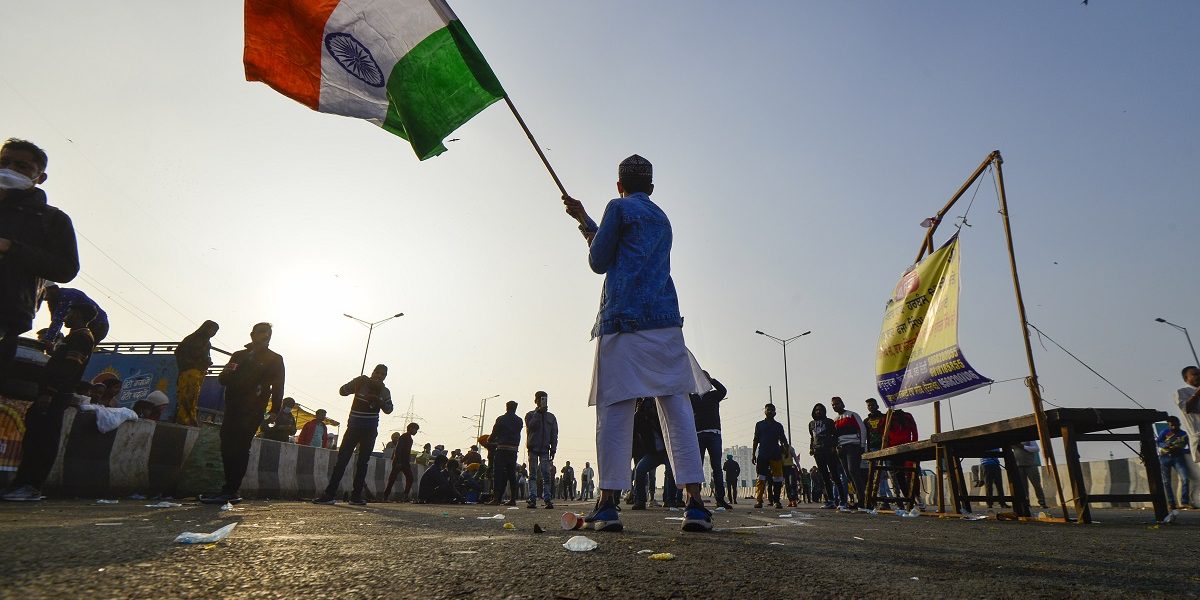 A farmer holds the tricolor at Ghazipur border during the protest against the Centre's agri-laws, December 15, 2020. Photo: PTI/Ravi Choudhary

If there is anyone who should not be surprised by the sustained and widespread opposition by farmers to the laws passed in September, it is Prime Minister Narendra Modi. For these “reforms” bear exactly the same stamp of hubris, lack of consultation and foresight that has characterised all the major initiatives his government has taken in the past six or more years.

This is not the first time that Modi has announced draconian measures that have far-reaching consequences, without prior warning, let alone consultation. He did this with demonetisation in 2016; with the Goods and Services Tax in 2017; with the Citizenship Amendment Act (CAA) and the National Population Register in 2019, and with a hasty lockdown to fight the COVID-19 pandemic in March that proved a monumental failure but inflicted untold hardship on 40-50 million migrant workers this year.

The many failures that have followed his exaggerated promises, and the unrest that many of these have generated, have sown a growing scepticism in the people. So it is not surprising that the farmers distrust the government’s assurances that the Acts will help double their earnings and are demanding their repeal. 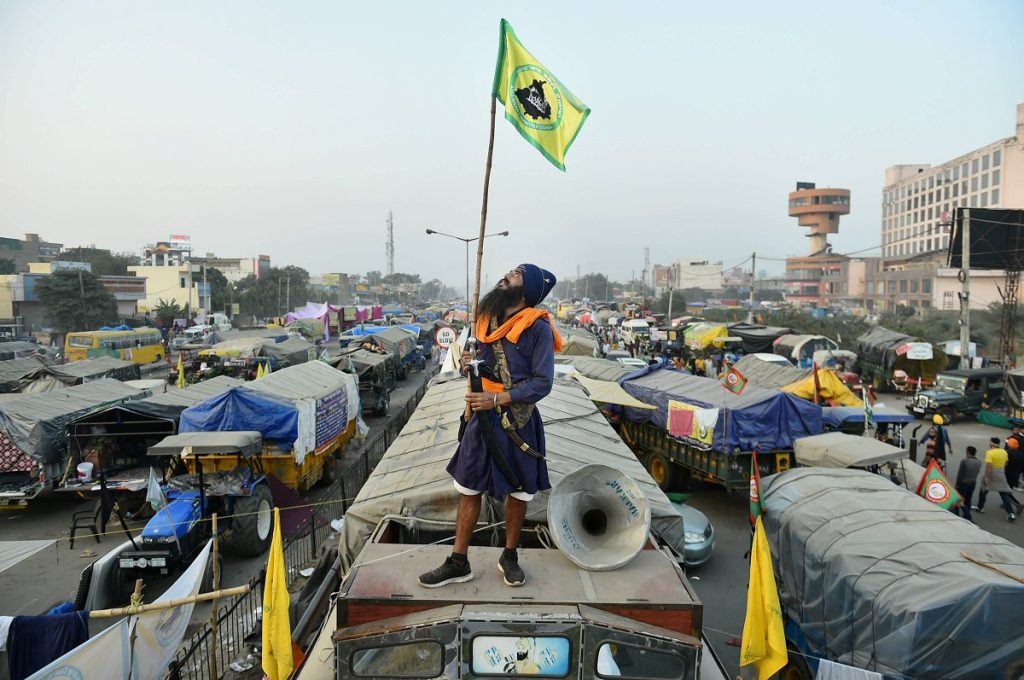 What is not so easy to understand is their refusal to discuss amendments to the three laws even after the government reassured them that it will not abolish the minimum support price (MSP) system that has existed for the past five decades. This will allow the farmers to sell their rice, wheat and other MSP-covered crops in the open market while they enjoy the security of knowing that they can sell these to the government if the need arises.

So, predictably, Modi’s spokespersons have reverted to coercion and accused the farmers’ leaders of being ‘Leftists’, ‘Khalistanis’ and puppets of the ‘tukde tukde gang’ that wants to ‘dismember’ India on the pretext of protecting its ethnic, political and religious diversity.

These tactics will not intimidate the farmers for, unlike India’s English-speaking elite, and unlike even the thousands of Muslim women and their non-Muslim supporters in the Shaheen Bagh movement, they are, and will remain, the bedrock of India’s civilisation and politics for many more decades to come. So if the government really wishes to improve the lot of the farmers, it needs to understand the causes of their stubborn resistance first.

Also Read: Protesting ‘Agri Reform’: Why Do Farmers Feel the Deck Is Stacked Against Them?

The benefits of the Green Revolution have been exhausted

These do not spring so much from doubt about the government’s intentions, as from their doubts about their own capacity to take advantage of these new ‘freedoms’. This capacity has declined sharply in the past three decades as the growth spurt given by the Green Revolution of the 60s and 70s has been exhausted and nothing has taken its place.

The Green Revolution was made possible by the development of hybrid varieties of wheat and rice, but India was able to take spectacular advantage of it only because of the immensely fertile soil of the Indo-Gangetic plain and the abundant supply of groundwater – often likened to an immense underground lake – beneath it.

This relentlessly intense cultivation has exhausted the soil. The tell-tale indicator is the need to use more and more fertilisers for every tonne of output. While the production of foodgrains has increased by 134% – from 126 to 285 million tonnes – between 1977-78 and 2018-19, the consumption of fertilisers grew by more than 600%, from 4.2 million tonnes to 27.2 million tonnes.

This increase has turned India into a food surplus country, but caught farmers in a ‘scissors crisis’ of rising costs of production and falling market prices. To prevent a crash in the latter, successive governments have turned what used to be a compulsory procurement price in the 1950s and 60s, designed to ensure a supply of foodgrains at reasonable prices, into a support price that would sustain the real income of the farmers in the villages. This was the genesis of the MSP and Agricultural Produce Market Committee (APMC), that the government’s new farm laws will make redundant. What this will mean for the farmer can be gleaned from the statement of their purpose as spelt out by Wikipedia:

“An Agricultural Produce Market Committee (APMC) is a marketing board established by state governments in India to ensure farmers are safeguarded from exploitation by large retailers, as well as ensuring the farm to retail price spread does not reach excessively high levels.”

The APMCs are the farmers’ shields against the stormy winds of the free market. It is no surprise therefore that state governments have tried, albeit with limited degrees of success, to extend the MSP system to 21 more agricultural crops.

But over time, this shield has turned into a trap: the more the farmers produce, the higher becomes the cliff from which they will fall if the MSP system is abolished and they are thrown into an open market. In such a market, the better off farmers, who have the means, the leisure and the contacts to make direct sales to traders in other states, and abroad, will prosper. But the small and marginal farmers will find themselves at the bottom end, forced to sell to middlemen who have none of the obligations that the state governments have imposed upon the APMCs.

And today, 125 million of the country’s 146 million farmers own or operate, an average of a little more than two hectares of land. For them, the abolition of the MSP and with it the disappearance or emasculation of the APMCs is virtually a kiss of death. Yes, given enough time many, perhaps most, of them will learn to survive and even prosper in a free market. But time is precisely what the farm laws will deprive them of. If they are forced through even with the retention of MSPs, the APMCs will survive: farmers will have the option to sell to them. But they will become progressively weaker. Many, probably most traders will migrate out of them. Those that remain will have a much smaller turnover and will therefore no longer have the resources to carry out the many functions, from warehousing to electrification to the construction of rural roads that they help perform now in Punjab and Haryana.

This is why the farmers are not satisfied with simply the retention of the MSP. They need much more support, but as of now cannot see how, and from where they will get it, if the laws are not repealed.

Also Read: Interview: ‘A Level-Playing Field for Farmers Can Only Come Through an MSP Regime’

Unsold stocks of wheat and rice

In fairness to the government, it must, however, be admitted that the present system also is not sustainable. The warehouses of the Food Corporation of India (FCI) are bursting with unsold stocks of wheat and rice and this food mountain continues to grow. At the end of June, they held 27.7 million tonnes of rice and 55 million tonnes of wheat. Together these amounted to 42.1 million tonnes more than the stipulated buffer stock requirement on July 1. Wheat is hygroscopic, i.e sucks in moisture from the air. It cannot, therefore, be stored for more than a few months before it becomes inedible.

The only way out at present has been to export the surplus. As a result, India has been transformed from the chronically food importing country it was in the 1960s into the world’s largest exporter of rice. In 2019-20, it exported 12 million tonnes – one-third of global exports – and over 6 million tonnes of wheat, much of the latter as cattle feed after it had become ‘unfit for human consumption’ in the FCI’s granaries. There are no reports of what the wheat fetched the government, but the rice fetched 7.1 billion dollars, i.e $591, or Rs 44,325 per tonne. The MSP for rice in 2019 was Rs 1,815 per quintal, i.e. Rs, 18,150 per tonne. The net profit from paddy exports in 2019-20 was, therefore, $4.18 billion.

This is the golden apple that has prompted the government and its supporters in Big Business to pick. The immediate beneficiaries will be the large urban exporters to whom the FCI will sell its surplus stocks. No one knows how much the FCI will sell these surpluses to private traders at, but it has been selling some of its stocks at the MSP or a little above that already. So this is likely to continue. The annual bonanza may be somewhat reduced from the $4.18 billion of 2019-20 by the fall in world prices that increased supply will trigger, but it will still be huge and will come to the exporters and their political backers every ear. 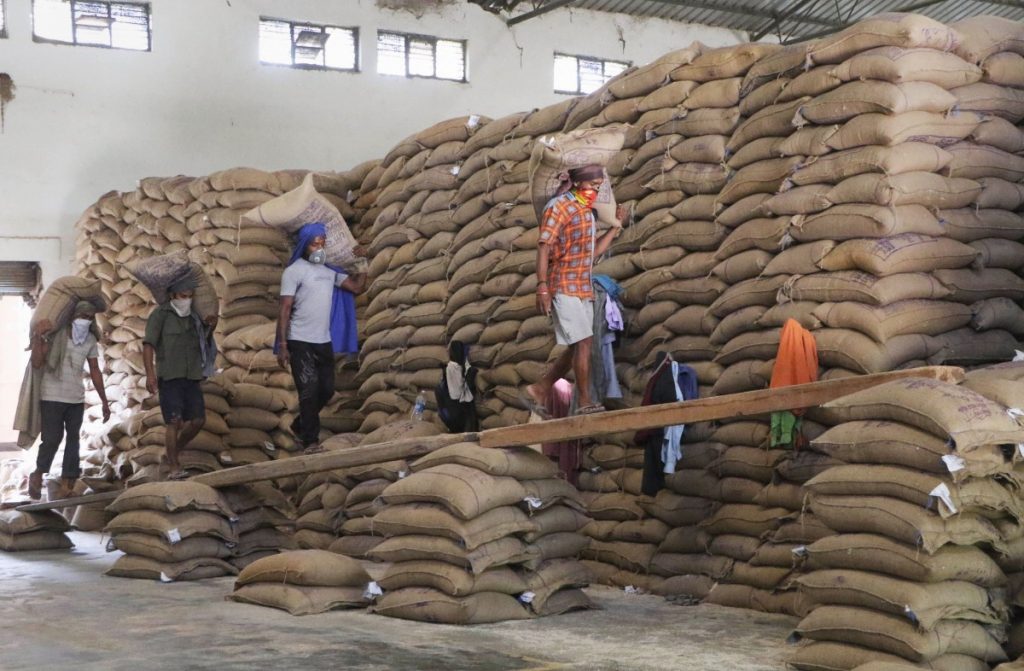 Labourers carry sacks of rice after unloading them from a wagon train at an FCI godown in Jammu, April 16, 2020. Photo: PTI

I will be surprised indeed if this is not the main motivation behind this supposedly benevolent reform. But the reform itself is needed, so to be accepted, it needs to be made benevolent. The simplest way would be to levy a 10% state GST upon all sales made to private traders, and something like a 28% GST upon rice and wheat exports, and channel these back to the APMCs via the state governments to continue performing the functions they perform today.

There will be cracks, even in such a system, through which a few farmers may fall through. But the chasm that all but the richest among them are facing today will be closed.