Representatives of 30 farmers' organisations attended the meeting during which it was decided that various highways and other roads would be blocked to protest against the new farm laws on November 3. 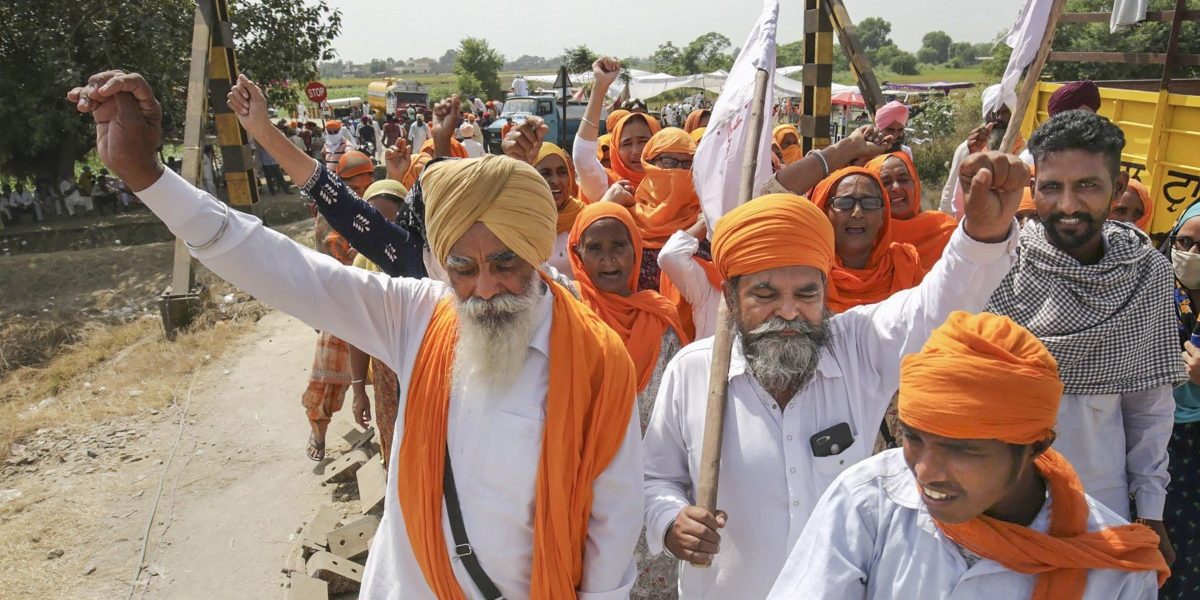 Farmers protest against the farm Bills in Amritsar. Photo: PTI

Kurukshetra: Farmers’ organisations from several states on Thursday gave a call for country-wide road blockades on November 3, to protest against the three central farm laws.

A decision for the nationwide chakka jam next month was taken during a marathon meeting of farmers’ outfits from various parts of the country. The meeting had been called by the Haryana Bhartiya Kisan Union here.

Speaking to reporters on the sidelines of the meeting, Haryana BKU chief Gurnam Singh said the meeting was called here to discuss the fallout of the three central farm laws and the farmers’ future strategy to oppose them at the national level.

He said while farmers’ agitation is going on in Punjab and Haryana, it needs to be energised in other states so that the Union government is forced to withdraw these black laws”.

Representatives of 30 farmers’ organisations attended the meeting here, he said.

We have given a call for nationwide ‘chakka jam’ from 10 am to 4 pm on November 3, 2020, during which we will block various highways and other roads to protest against the new farm laws, Singh said.

He alleged that the BJP-led government flouted all democratic norms to get the three ‘black’ farm Bills passed in a hurry.

The farmers, arhtiyas (commission agents) and labour organisations are protesting against these laws, but it has had little impact on the BJP government. This shows that power has gone into their heads and they are refusing to listen to the farmers who are the backbone of the country’s economy, he said.

He said the time has come for farmers and others associated with them to show their strength to the power-blinded BJP government.

Ram Pal Jat, national president of Kisan Mahapanchayat, told reporters that we discussed the strategy to be adopted to fight these three laws tooth and nail.

We also discussed that various farmers’ outfits need to have a common minimum programme to continue this struggle against the farm laws in a more effective way, he said.

He also said the farmers’ bodies will ask legislators and parliamentarians to choose on which side they are.

We will ask them whether they are on the side of these anti-farmer laws or on the side of farmers, who are fighting against these legislations, he said.

Earlier, Gurnam Singh welcomed the decision of Shiromani Akali Dal’s Haryana unit to join hands with Haryana BKU in its struggle against the farm laws.

A delegation of SAD’s Haryana unit, led by its resident Sharanjit Singh Sodha, reached the meeting venue of farmers at Kamboj Dharamshala here and conveyed his outfit’s decision.

Sodha told reporters after the meeting that Shiromani Akali Dal, which came into existence over 100 years back, has always taken steps in favour of farmers.

Gurnam Singh appealed to other organisations to join the farmers’ struggle, irrespective of their political affiliations.

Farmers have expressed fears that the Centre’s farm laws would pave a way for the dismantling of the minimum support price mechanism, leaving them at the “mercy” of big corporates.