The ‘Dilli Chalo’ protest rally scheduled for November 26 and 27 will take place with this meeting proving to have made no headway to end the protests. 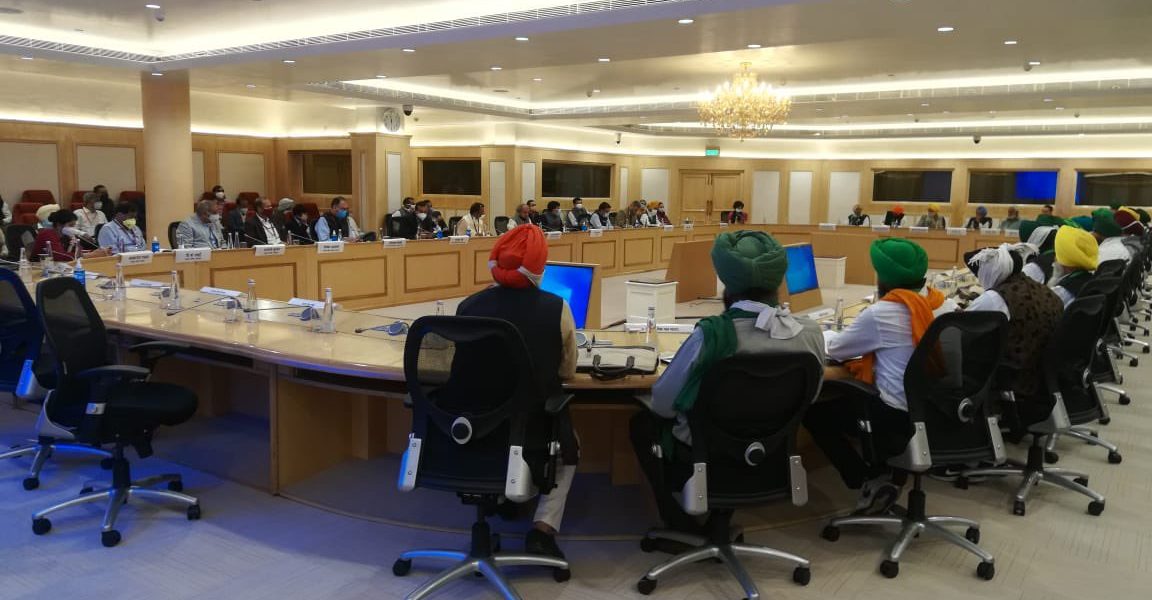 Mohali: After seven hours, no definitive conclusion was reached at the meeting between farmers bodies, the Punjab agriculture department, the Union agriculture minister and the Union railways minister in New Delhi on November 13.

The meeting thus inconclusive, farmers’ protests in Punjab against the farm Acts appears set to continue. The ‘Dilli Chalo’ rally scheduled for November 26 and 27 will take place as well.

The movement of freight trains into Punjab is also unlikely to resume soon.

At the meeting, attended by farm union leaders and senior officials of the Punjab agriculture department, the Centre tried to convince farmers that the newly enacted laws would help them and increase their income. But the delegation of farmers are reported to have stuck their ground and raised counter demands. A view of the hall during farmers’ and Punjab agriculture department’s meeting with Central ministries. Photo: Special arrangement.

“When we raised the demand of making minimum support price the legal right, they did not have any assurances to give us. For two minutes there was pin-drop silence in the hall,” Dr Darshan Pal Singh of the Krantikari Kisan Union and one of the three spokespersons chosen to negotiate with the Centre told The Wire.

On the resumption of train services, the Centre did not accept the farmers’ body’s demand of resuming only freight trains, they insisted on resuming  both goods and passenger trains together.

The farmers’ bodies will now meet in Chandigarh on November 18 to form a consensus on whether they want to allow the movement of passenger trains and ease their protests in Punjab.

“They should have resumed the goods services right after Diwali, but they are not doing so. We will now meet and decide the future course of action,” said Pal.

At the meeting, the Centre also proposed the formation of a committee to deliberate over the demands of farmers and subsequently release a report. They added that until the report of the formed committee is released, farmers’ bodies will have to call off their  protests. But farmers unions did not agree to this demand at the meeting.

“This proposal by them, I should say, is also a good development for us. At least they are ready to deliberate over our demands. But the protests in Punjab will continue,” Pal added.

Using an agricultural metaphor, Pal said, “We have sown the seed of our demands, now we have to see how it grows and if it will be fruitful or not.” 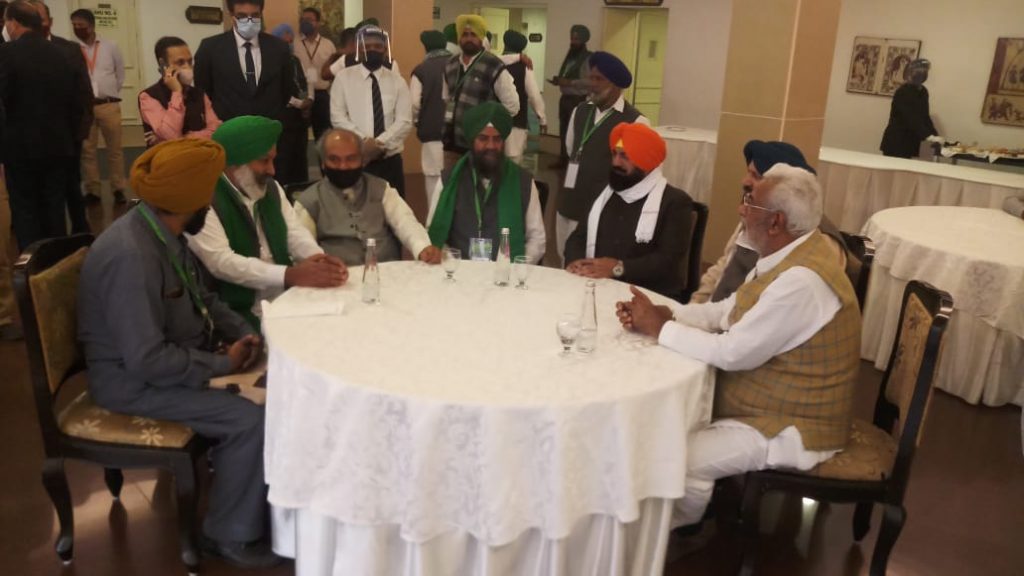 A view of the hall during farmers’ and Punjab agriculture department’s meeting with Central ministries. Photo: Special arrangement.

In a press statement released by the Ministry of Agriculture on Friday, it was said that “during the interaction various issues related to farmer’s welfare were discussed at length. It was assured that the Government of India is always committed to protect the interest of farmers and is always open for discussions for the welfare of farmers. The talks were held in a cordial atmosphere and both sides agreed to continue to hold further discussions.”

Also read: Is the Result of the Baroda Bypoll an Indication of the Future of Farmers’ Agitations?

Later in the day, the All India Kisan Sangharsh Coordination Committee (AIKSSC) addressed the media to say that since the talks of the Centre with Punjab’s farmers had remained inconclusive, the pan-India call to join the ‘Dilli Chalo’ march will not be withdrawn. Main demands of farmers placed before the Centre

Farm union leaders raised five main demands before the Centre. They demanded that the three laws pertaining to agricultural reform should be withdrawn immediately, “as it would strengthen the corporate grip on the agriculture sector”.

They also demanded that the Electricity Act 2020 be withdrawn. In addition, the withdrawal of punishment of up to five years and fine of up to Rs 1 crore against farmers for burning farm stubble should be withdrawn along with the immediate resumption of goods services in the state.