According to Mizoram's agriculture minister, the insect has affected 70% of the state's maize fields since April.

A farmer shows a corn shoot infested with fall armyworm at his farm in Narayangaon village in the western state of Maharashtra, India, December 18, 2018. Credit: REUTERS/Rajendra Jadhav

New Delhi: The fall army worm (FAW), noticed in early April in the maize fields of Mizoram, has continued its menace in the northeastern state. The outbreak has already caused substantial damage to crops in neighbouring Bangladesh and Myanmar as well.

Mizoram is one of the top producers of maize in India. Between 2017-18, it produced about 9,470 metric tonnes.

C. Lalrinsanga, the Mizoram Agriculture Minister, told The Wire from Aizwal on May 17 that the insect – after it was first spotted on April 8 – has so far affected 2,424 hectares of the 3,439 hectares of maize cultivation across all eight districts of the state.

“Till now, about 68% of the maize fields have been affected by the pest. As per our initial estimate, the loss was around Rs 20 crore. But it is likely to go up if the outbreak is not brought under control.”

James Lalsiamliana, joint director of the agriculture department, told The Wire that over 5,000 farmer families have been affected by the pest attack. He said rapid response teams, created following the detection, are working out a strategy to tame it. Holding workshops with the maize farmers to spread awareness about the life cycle of the pest, the use of bio-pesticides to control the outbreak, etc., have been rolled out on the ground, he added.

On May 15, a team of scientists from the Indian Institute of Maize Research (IIMR), under the Indian Council of Agricultural Research (ICAR), arrived in Mizoram to help the state government control the outbreak. 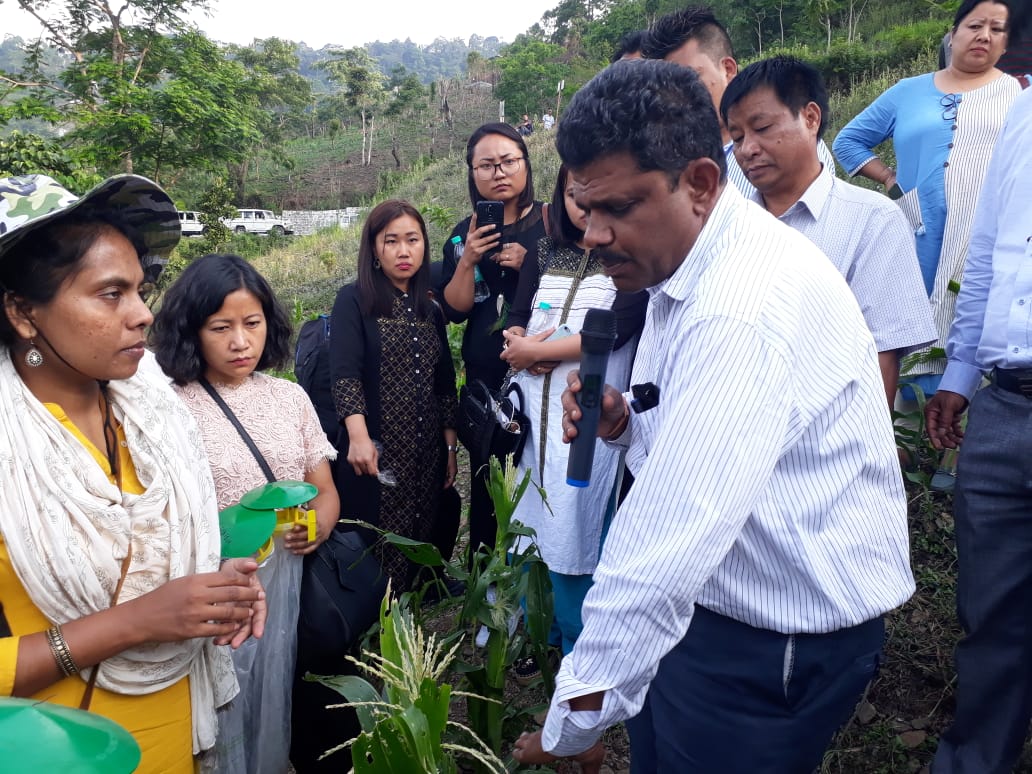 The minister said, “I had a detailed meeting this morning with the team of scientists who have come from IIMR’s Ludhiana and Hyderabad branches. They have already explored the maize fields, detected the problem and have assured me that they should be able to control it soon.”

The agriculture joint director said, “The good news is, the crop is still in its early stage and if we can arrest the problem now, and get a good bout of rain to help fresh growth, we should be able to stem the loss.”

The minister added, “Though we are using a very good pesticide, my suggestion to the farmers during out meeting was also to try and pluck out the worms by hand wherever possible as using any pesticide is not good for health. Additionally, I have requested the Young Mizo Association (YMA) also to organise a fire in the affected areas at night. These worms get attracted to light at night and might kill themselves. It has been a traditional method of controlling pests in our areas.”

With over 700 branches spread across the north-eastern state, the YMA – formed in 1935 – is a socio-cultural voluntary organisation that has a huge influence over the Mizo.

“Since the pest has already been detected in neighbouring Myanmar and Bangladesh, I think it was inevitable that Mizoram, which grows maize, would get affected too. So would our neighbouring states that also have maize fields. But we are relatively lucky as we have been able to detect it at an early stage,” the minister said. IIMR scientists in a meeting with Mizoram’s agriculture minister on May 17. Credit: Special arrangement

Though the fall army worm has been a problem in the maize fields of the Americas for a long time, it was noticed in 2016 in western and central Africa as well. By mid-2018, it had affected the continent’s agriculture production and has since been moving towards Asia. It survives on the leaves and stems of more than 80 plant species. Experts say that apart from maize, it can affect rice, cotton, sugarcane and sorghum, and also some vegetable crops.

In 2018, fall army worms were found in Bangladesh and Sri Lanka, as well as in maize fields of Karnataka in India. In Sri Lanka, it affected over 40,000 hectares of the maize crop. By July-August, the pest ate up 70% of the standing maize crop in Karnataka, leading to a drop in its production by 20%.

Also read: India Knows Its Invasive Species Problem But This Is Why Nobody Can Deal With it Properly

Following the ICAR’s pest alert in August 2018, Bangladesh’s Department of Agriculture Extension issued an alert in the following month. Bangladesh produces only 70% of its annual maize requirement and is dependent on Indian maize besides that of Egypt and some other countries to meet its annual requirement of five million tons.

In Myanmar, the worm was first noticed in the maize fields of the Shah State this past January. Shan state, which borders China, and is also hugely affected by the worm, is the largest producer of maize in that country. The Myanmar government has since been working with the American government to minimise the damage.

Since the pest has affected most of Asia, including Thailand and China –  the largest global producer of maize after the Americas – the UN’s Food and Agricultural Organisation (FAO) has also recently expressed concern over it. In March this year, the FAO held a consultative meeting in Bangkok to tailor strategies.

The organisation noted in a statement, “The use of chemical pesticides needs to be very carefully considered, given that FAW larvae hide largely in the ring of leaves (whorl), and that chemical pesticides can have negative effects on the environment and public health.”