The average price for potatoes in UP in November 2016 was Rs 916 per quintal, which fell 41.8% to Rs 532 per quintal in the month of December 2016 – the first full month post demonetisation. 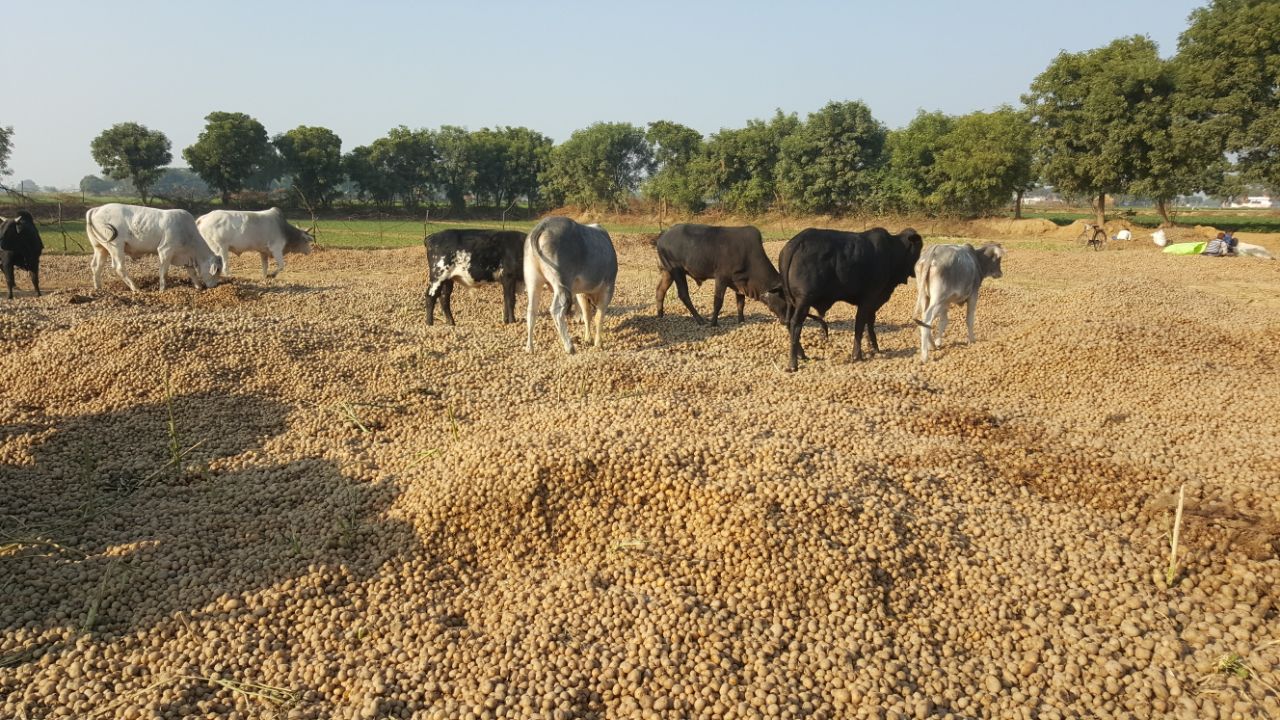 This is the second article in a two-part series on the crisis of potato farmers. You can read the first article here.

The demonetisation-induced currency shortage stretched till late April 2017 in several parts of rural India, including Uttar Pradesh (UP), which produces around 30% of India’s potatoes. Remonetisation of banks and ATMs was a slow and challenging process for the banking system, and the rural areas were the last to be remonetised.

A senior official within the government banking system, tasked with the job of remonetisation, in western UP had told me in May 2017 that the task was still to be completed in rural areas. “There are still vast pockets where the supply of cash is not sufficient and the rural areas are the worst hit. We are still only able to meet about 60% of the daily demand for cash. Most banks run out of cash by 2 pm,” the official had said. 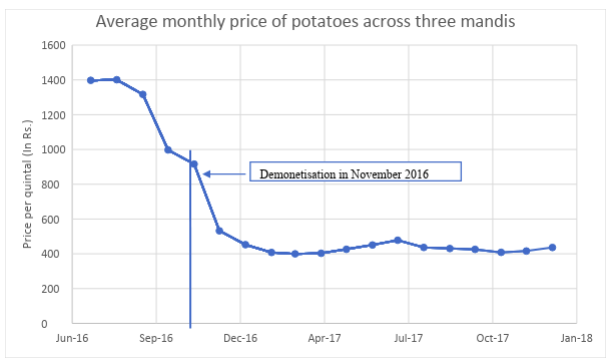 For the above chart, we took daily potato prices (Rs per quintal) from three regulated mandis – Agra, Hathras and Mathura – in southwest UP’s potato belt, which contribute roughly 20% to India’s total potato production. The average price for each month beginning July 2016 and ending January 2018 was calculated from the daily price data for each mandi and then combined to arrive at average monthly price across the three mandis. It is important to note that these prices reflect the scenario in regulated mandis, while several unregulated mandis also operate where the prices are generally lower.

The average price for November 2016 was Rs 916, which fell 41.8% to Rs 532 in the month of December 2016 – the first full month after demonetisation. The downward trend continued and prices fell to as low as Rs 399 per quintal in March 2017. The prices fell much below the average cost of production of Rs 500 per quintal. 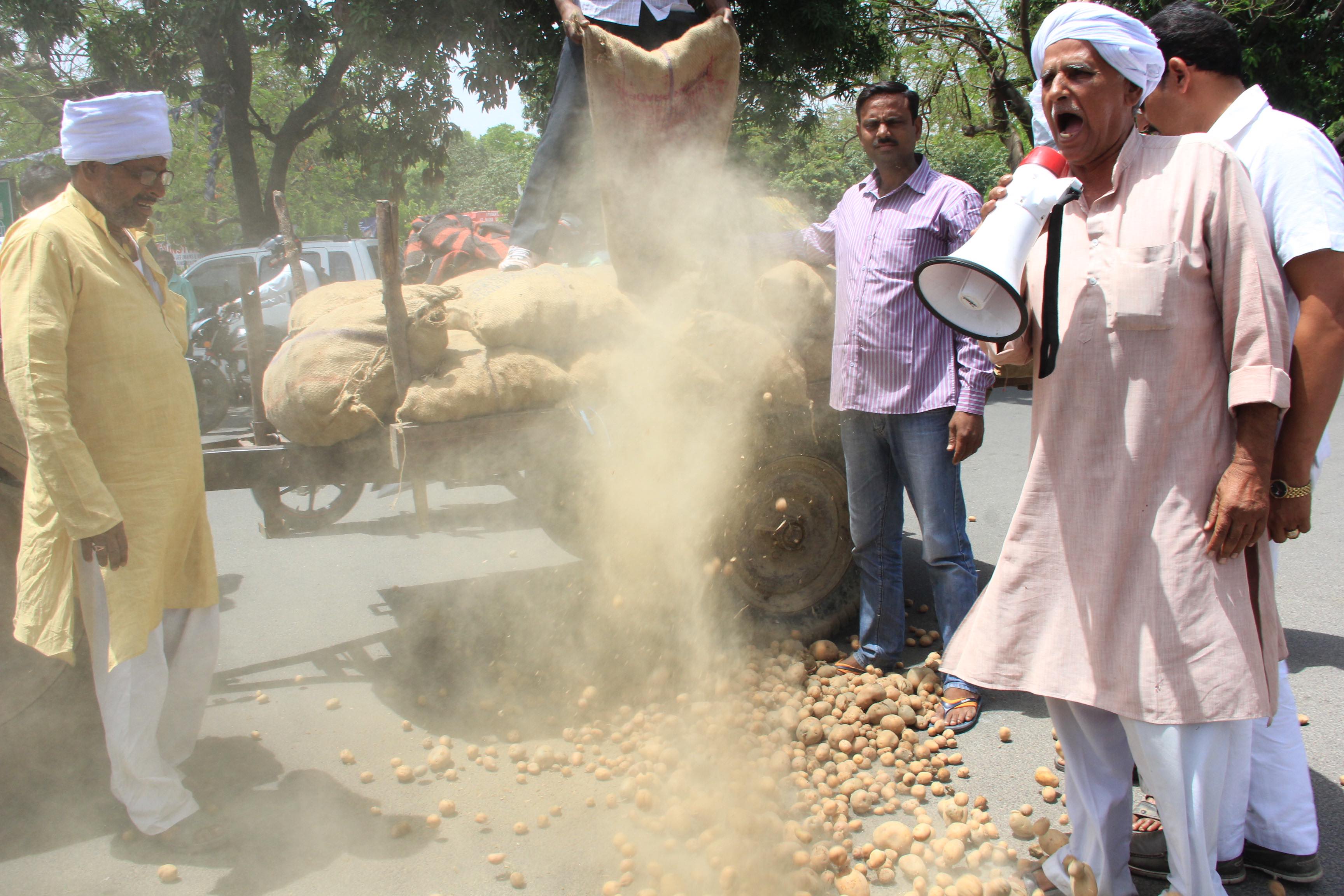 Farmers dump potatoes on the streets in Meerut in March 2017. Credit: Munish Kumar

Professor Arun Kumar, economist and author of a book on demonetisation, notes that demonetisation played a huge role in suppressing prices in the period that followed. “Demonetisation ensured that traders had very little working capital. They forced farmers to sell at lower prices. Demand also fell as the entire unorganised sector was deprived of their mode of transaction. There were many reports that people were not able to buy enough food. These factors played a huge role in the price crash that followed demonetisation. And cash shortage continued till June, so the impact was felt for a very long-time period,” he said.

To add to the downward push on prices due to demonetisation, UP also saw a bumper crop of potato when the new harvest came in February. For 2016-17, UP produced 155 lakh tonnes of potatoes. “The market was already reeling under cash shortage and on top of that we had a bumper crop of potato. The market was flooded. Naturally, prices fell drastically. In the unregulated mandis, prices had fallen to Rs 150 per quintal,” said Sudhir Panwar, professor at the University of Lucknow, former member of the state planning commission and president of the farmers’ organisation, Kisan Jagriti Manch.

Yogendra Yadav, social scientist and politician, believes that demonetisation was the final nail in the proverbial coffin for farmers who were already extremely vulnerable. “Farmers were already very vulnerable, with the market extremely unfavourable. Demonetisation made matters much worse. It triggered a collapse from which farmers are yet to recover,” he told The Wire.

Extending the scope of the data used above, we looked at prices since the start of the 2014 season in February 2014, as the potato crop in UP is harvested starting February.

Market volatility is apparent in the chart presented above, with significant peaks and troughs in the three seasons prior to the 2017 season. However, in the period after demonetisation, no such peak was observed as prices fell to levels below Rs 500 per quintal and have not risen since. 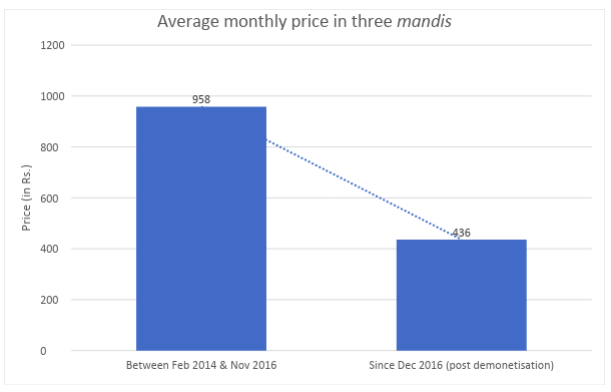 While in the period between February 2014 and November 2016, the average monthly price in the three mandis was Rs 958/quintal, in the 14 months since demonetisation, the average monthly price was Rs 436. It is also worth considering that if the current prices are discounted for inflation, their real value would be much lower. Therefore, the fall in the real value for farmers has been much greater than is apparent from these numbers. 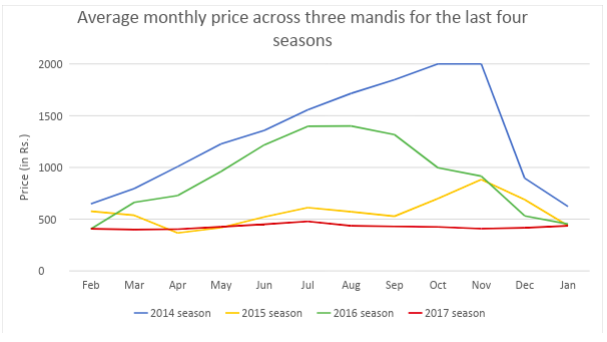 If we look at the last four seasons – with each season starting in February and ending in January – we can see that the prices in the 2017 season have been lower than prices in the previous three seasons. The average price for the 2014 season was Rs 1,311/quintal, three times higher than the average price for the 2017 season which stood at Rs 427.

It is evident that even in the second half of 2017, prices did not show any signs of moving northward. The availability of cash in rural areas normalised by around June 2017. Why then have prices not risen?

Kumar argues that demonetisation was the trigger for the current crisis in the potato market, but there were other factors too, more structural, which were at play. “There are a lot of structural issues with the market of all vegetables including potatoes. The traders operate as cartels and they set the price. The farmer has to take it or leave it. And we know that the Indian farmer with small landholdings cannot afford to leave it,” he said.

“There is also no planning done by the government. There should be advance planning regarding what the demand is, how much should be grown. That would help the market a lot. But, that is not done,” he added.

Kumar expects the situation to get worse in the coming months as the new harvest nears. “Things will get worse. There is an existing stock of potatoes already. Now, the new produce will come in and that will make matters even worse for the farmers.”

Yogendra Yadav argues that the story of potatoes illustrates the problem with horticulture crops in general. “One large trend is what is happening to fruits and vegetables in general. Like potatoes in UP, we have seen tomatoes being dumped in Jharkhand. What we are seeing is a shift towards growing more horticulture crops in the last few years. That comes with its set of problems as these crops are perishable. We do not have the requisite infrastructure and market mechanisms that are required to deal with this. Farmers stand exposed to extreme market volatility. And the government has done nothing to help.”

According to data released recently by the Ministry of Agriculture, horticulture production is estimated to be a record 305 million tonnes in 2017-18. It would be the sixth year in succession that production of horticulture crops has been higher than that of foodgrains.

“It is a structural change that is taking place and now more and more farmers are dependent on the volatile markets for horticulture crops for their income,” said Yadav.