The 'Delhi Chalo' march will be held on November 26 and 27 in protest against the recently passed farm laws and the minimum support price system. 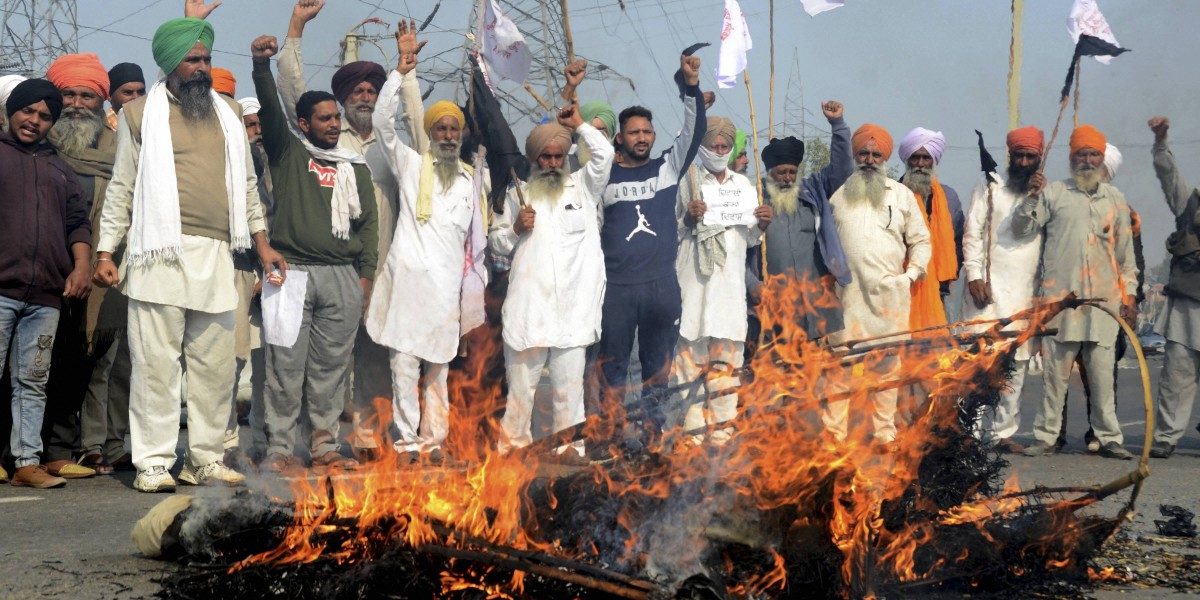 Farmers raise slogans beside a burning effigy during a protest against the Central Government over the recent farm reform bills, in Amritsar, Friday, Nov. 13, 2020. Photo: PTI

New Delhi: The Delhi Police on Wednesday asserted that it has rejected all requests received from various farmers’ organisations to protest in the national capital against the Centre’s new farm laws. This comes a day before the ‘Delhi Chalo’ march, which is to be held on November 26 and 27 in protest against the recently passed farm laws.

The police had on Tuesday said legal action would be taken against the protesting farmers if they come to the city for any gathering amid the COVID-19 pandemic outbreak.

The farmers will reach Delhi on November 26 through five highways connecting the city as part of their ‘Delhi Chalo’ march call.

Taking to Twitter, the city police said requests have been rejected for any such gathering in the national capital.

REGARDING FARMER ORGANIZATIONS MARCH TO DELHI ON 26&27 NOVEMBER

All the requests received from various Farmer Organisations regarding protest in Delhi on 26 and 27 November have been rejected and this has already been communicated to the organisers.@CPDelhi @LtGovDelhi

“Please co-operate with Delhi Police in ensuring no gathering in Delhi amid coronavirus, failing which legal action will be initiated as per law,” it said.

Farmer organisations from UP, Haryana, Uttarkhand, Rajasthan, Kerala & Punjab have called a march to Delhi on Nov 26 & 27. No gathering is permitted amid coronavirus.The permission has been rejected and it was communicated well in time to the organizers @CPDelhi @LtGovDelhi

The All India Kisan Sangharsh Coordination Committee (AIKSCC), Rashtriya Kisan Mahasangh and various factions of the Bharatiya Kisan Union have joined hands and formed a ‘Samyukta Kisan Morcha’ to press the central government to scrap the three farm laws.

The protest has the support of over 500 farmers’ organisations.

A seven-member committee has also been formed to coordinate the operations of the Morcha.

Farmers have expressed apprehension that the new laws would pave the way for the dismantling of the minimum support price system, leaving them at the “mercy” of big corporates. They have been demanding that the laws be repealed.

The Haryana Police is looking to seal its borders to prevent farmers from marching towards the national capital, and has put in place traffic diversions on four major national highways leading to Delhi, the Hindustan Times reported. Traffic will be diverted or blocked on Ambala-Delhi, Hisar-Delhi, Rewari-Delhi and Palwal-Delhi national highways on November 25, 26 and 27. In Punjab, entry from the districts of Panchkula, Ambala, Kaithal, Jind, Fatehabad and Sirsa will also be blocked, the report said.

Haryana has imposed section 144 of the CrPC to prevent the assembly of protesters.

Haryana farmers said that they will be helping Punjab farmers at all the 10 border entry points from where jathas will enter Haryana, Indian Express said in a report.

Punjab farmers have reached the state’s borders with Haryana to make arrangements of langar for the group of farmers who will be heading towards Delhi, and farmers in the neighbouring areas of Haryana are reaching out to their counterparts in Punjab to help them with milk supplies, vegetables, the report added.

The Delhi rally is expected to witness at least one lakh farmers to be coming only from Punjab, 50,000 from Haryana, and another two lakh from surrounding states like western Uttar Pradesh, Rajasthan and Madhya Pradesh. There will be cavalcades of farmers moving from all corners of the country emerging into Delhi.

They had applied for police permission for Ramlila Maidan for accommodation of the farmers, and Parliament Street as the protest venue.