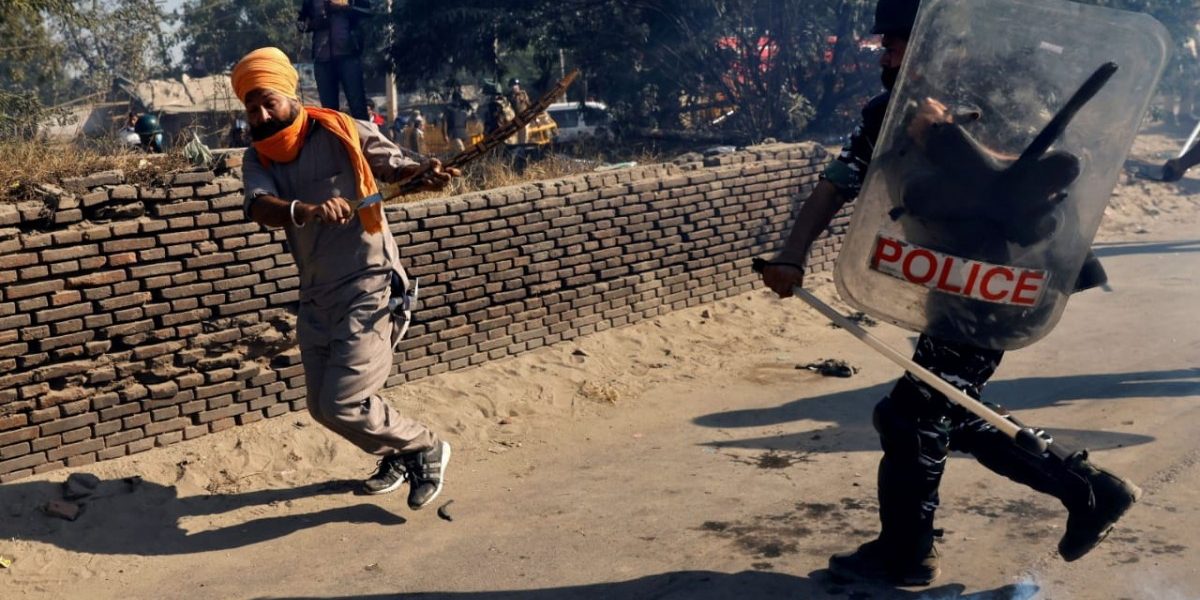 A policeman chases away a farmer during a protest against the newly passed farm bills at Singhu border near Delhi, India, November 27, 2020. REUTERS/Danish Siddiqui

A cases was registered on November 26 under sections 307 (attempt to murder), 147 (rioting), 149 (unlawful assembly), 186 (obstructing any public servant in discharge of public functions) and 269 (negligent act likely to spread infection of disease dangerous to life) among others at the Parao police station on a complaint from Head Constable Pardeep Kumar as hundreds of farmers assembled on the GT road near Ambala Cantt to proceed towards the national capital.

The FIR names Charuni and several other unknown farmers as accused. According to it, the BKU Haryana chief and others had gathered near Mohra village in Ambala.

The FIR says Deputy Superintendent of Police Ram Kumar, who was leading the police team at the spot, asked Charuni not to proceed further but he refused.

It adds that Charuni and other farmers broke police barricades with their tractors. 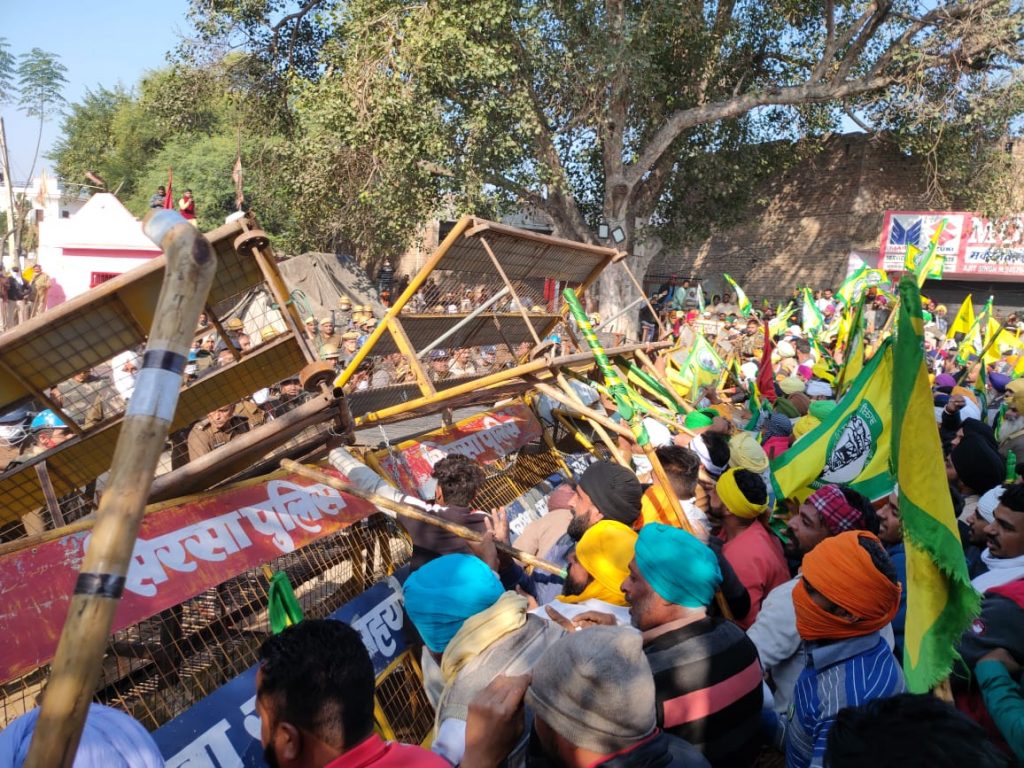 Protesting farmers breached the police barricades at the Mandi Dabwali area near the Punjab-Haryana border. Photo: By arrangement

Some of the police officials had a narrow escape and could have been run over by the tractors heading towards Delhi, says the FIR.

Charuni and other farmers also violated guidelines pertaining to the COVID-19 pandemic, it further states.

A case against some farmers from BKU (Charuni) and others from Punjab was also registered at Panipat for violations relating to breaking police barriers and other charges.

“A case has been registered under the provisions of section 188 IPC (disobedience to order duly promulgated by public servant), Disaster Management Act, 2005 and under other provisions of the IPC,” Inspector Rajvir Singh, SHO of Panipat’s Police Station (Industrial) in Sector 29, said over the phone.

Two days ago, Haryana Director General of Police Manoj Yadava had said that state police acted with “great restraint” as farmers broke barricades during their march.

He had said the farmers took an aggressive stand and tried to disturb law and order by “pelting stones” at police at many places. 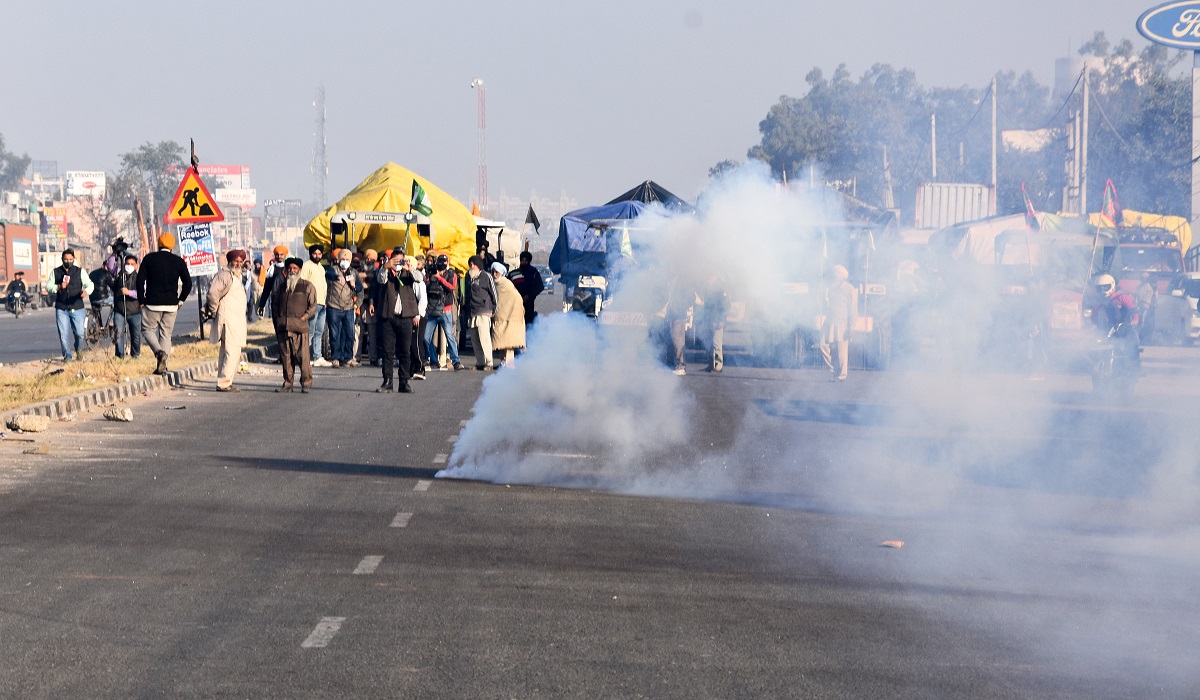 Teargas shells fired by Delhi Police land near protesting farmers who are attempting to arrive in Delhi to protest against the farm laws at Singhu border in New Delhi, November 27, 2020. Photo: PTI

Some police personnel sustained injuries, and police and private vehicles were damaged, Yadava had said.

“Agitating farmers not only damaged police barricades, but also proceeded by removing all the blockades and obstructions in an unlawful manner. Acting with restraint, police did not use force on the agitating farmers,” he had added.

Prohibitory orders under section 144 of the CrPC had been imposed in several parts of Haryana to prevent the assembly of people.

Farmers from Punjab and Haryana are marching towards Delhi as part of a protest to demand a repeal of the Centre’s new farm laws, which deregulate the sale of agriculture produce.

They say the laws will lead to the dismantling of the minimum support price (MSP) system.