Sarwan Singh Pandher, the chief of the KMSC, told The Wire “Our fight is with the government, not amongst ourselves.” 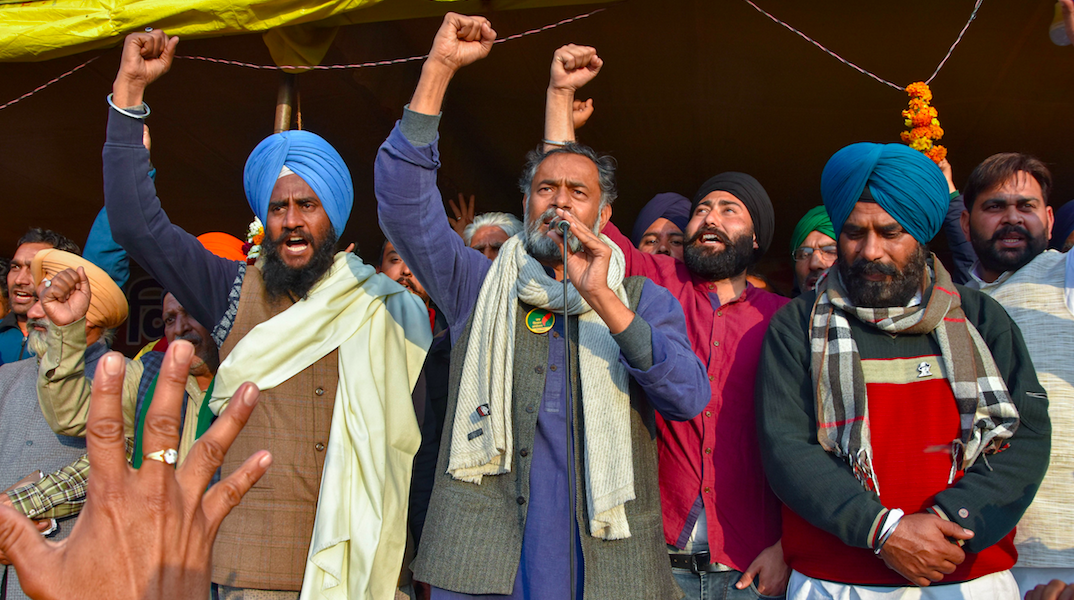 Mohali: A day after the Uttar Pradesh government tried to forcibly remove protesting farmers and their allies from the Ghazipur border, the Delhi Police and Rapid Action Force showed up at the Singhu and the Tikri Border in large numbers as well. According to protesters at the site, the police were joined by people they called “goons sponsored by BJP and RSS”. These people were determined to provoke people on religious grounds and disrupt the harmony of the movement, protesters said.

At the Singhu border, the stages of the Kisan Mazdoor Sangharsh Committee (KMSC) and the Samyukta Kisan Morcha (SKM) are situated at some distance from each other. According to Navjot Kaur, a protester who spoke to The Wire, the stage of the KMSC was attacked and volunteers of the group were brutally injured.

The KMSC  is the union which took the Outer Ring Road route on January 26, defying the SKM’s call to stick to routes decided upon in meetings with the Delhi Police. After this, the SKM called for a boycott of the union. But when their stage and volunteers were being attacked, those from the SKM camp helped fight disruptors and took the injured to a safe place.

“This shows how each one in this movement is fighting the government-run propaganda together,” Navjot Kaur said.

Kisan Mazdoor Sangharsh Samiti says 150BJP/RSS goons attacked their stage with the help of police, and around 15 farmers got seriously injured. pic.twitter.com/FoF7h4GFuR

Speaking to The Wire, Sarwan Singh Pandher, the chief of the KMSC said: “Our fight is with the government, not amongst ourselves.”

When asked about the call for the boycott of his union, he said: “There are fights between family members as well, things don’t always work out smoothly. But that doesn’t mean that there are no solutions. We will fight the government and stick together to get the three farm laws repealed.”

Navjot Kaur and several other protesters who have taken leading roles are convinced that those who attacked the Singhu site today, January 29, have close ties with the BJP. Kaur shared pictures with The Wire to support her claim. According to her, the wife of a person who was present at the protest site today is a BJP councillor . The person was also photographed walking with Union home minister and former BJP chief Amit Shah at an event. “There’s no doubt that these people are government sponsored people who wanted to cause mayhem,” she said. 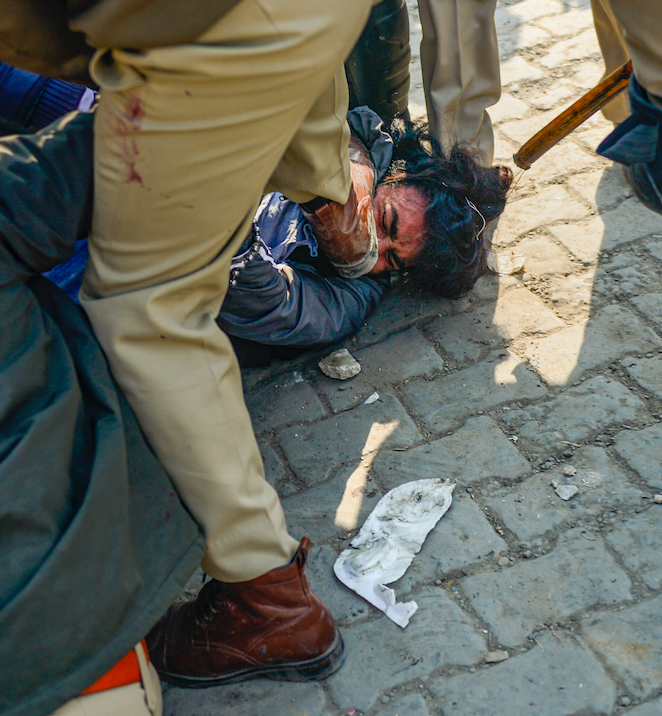 A police personnel’s boot is seen on a man’s face in Sindhu on January 29. Photo: PTI

At the Tikri Border, Ajay Pal Natt, a protester and the editor of the farmers’ newspaper Trolley Times who was witness to the disruption told The Wire that the unity of the farmers’ front successfully thwarted the evil designs of the disruptors.

“They seemed like goondas, and had their masks on. They were raising provocative slogans. I think they wanted to damage our stages and tents and threaten us. They wanted to help their favourite lapdog media channels with some good visuals of confrontation but we did not let them,” he said.

And then this happened… Watch full video. pic.twitter.com/U9CGt0CBPQ

“We made a human chain to counter them. We knew they were going to raise slogans which will provoke the Sikhs in the protest, so we got people from Haryana to dominate the human chain. We had done our planning beforehand after all that we saw at Ghazipur and at Singhu,” he added.

The Bharatiya Kisan Union (Ekta-Ugrahan) which is the front union at the Tikri Border‘s 22-km long stretch had planned a tricolour march at the site today. Just before the march, the “goons appeared at the protest site,” Natt said.

“I think they had planned that they would destroy our stages and damage our tents while we would have been busy at the march. But we had already manned all our stages with volunteers. We were prepared,” he said.

The huge gathering of farmers and the arrival of protesters from the Muzaffarnagar mahapanchayat at the Ghazipur border after last night’s stand-off between farmers’ leader Rakesh Tikait and the Uttar Pradesh administration has rejuvenated the movement.

In their press statement, the BKU (Ekta-Ugrahan) sharply criticised the provocation by goons at both theTikri and Singhu Border. The press note read: “The police were a mute spectator when RSS-backed goons attacked the Singhu site. This shows how the RSS and the police are working as one unit to shut down the farmers movement.”

Also read: As Support for Farmers’ Agitation Swells, Is the State Crackdown Backfiring?

The All India Kisan Sabha also issued a press note condemning the attack on the movement. “AIKS notes that the Sangh Parivar has orchestrated violent groups with active connivance of the Uttar Pradesh and Haryana police at Gazipur, Palwal, Shahjahanpur and is seeking to create a civil strife kind of a situation,” the statement read. The AIKS also issued a call to all democratic sections to come out in support of the farmers.

The SKM, which had been negotiating with the government on the three farm laws, also said that the BJP is trying to give a communal colour to the movement.

“The way the government has unsuccessfully tried to spoil the atmosphere on the Ghazipur border and the Singhu border for the last 3 days proves that the police and BJP-RSS are desperately plotting to kill this movement. Similar unsuccessful attempts were made on the Tikri border too,” their statement read.

The SKM will observe a fast from 9 am to 5 pm at all borders and protest sites across India on January 30, on the martyrdom day of Mahatma Gandhi. The day will be marked as ‘Sadbhavana Diwas’, to spread the values of truth and non-violence, the SKM’s statement noted.

Meanwhile, Congress leader Rahul Gandhi attacked the BJP for forcibly trying to shutdown the farmers’ movement. “Centre must not think that the farmers will go home,” he said.

Gandhi blamed the Ministry of Home Affairs, under Amit Shah, for the clashes that occurred on Republic Day.

“Why were people allowed in the Red Fort? Why weren’t they stopped? Ask the home minister what the objective was of letting those people inside the premises,” Gandhi said. Gandhi also stated that the Congress is supporting the farmers movement.