An analysis of over 2,000 mandis from 18 states has shown that farmers' access to mandis has been significantly curtailed during the lockdown 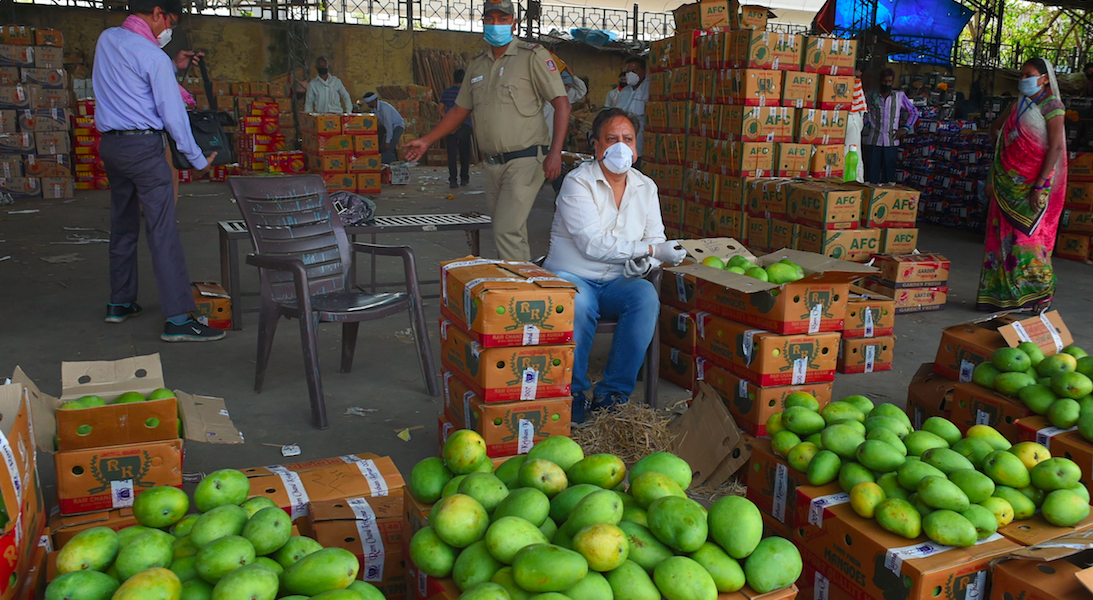 A fruit vendor waits for customers at Azadpur Sabzi Mandi during a nationwide coronavirus lockdown to curb the spread of coronavirus, in New Delhi, Tuesday, April, 21,2020. Azadpur Sabzi Mandi will remain open round the clock till the lockdown is lifted to ensure an uninterrupted supply of essentials in the national capital. Photo: PTI

New Delhi: An analysis of over 2,000 mandis from 18 states has shown that farmers’ access to mandis has been significantly curtailed during the lockdown. The study used daily data from the government website Agmarknet for the period between March 15 and April 14 for the years 2017, 2018, 2019 and 2020.

The study, undertaken by Vikas Rawal who is professor at Centre for Economic Studies and Planning at JNU and Ankur Verma who is a PhD student at the Centre, has found that in 2020, as many as 502 mandis were non-functional as compared to 72 in the same period on 2019.

According to the analysis, this goes on to show that the government announcement on March 27 – two days after the lockdown was announced –  to exempt farm operations, mandis from the lockdown has proven to be ‘completely ineffective’.

The number of mandis that reported arrival of crops on at least one day in the period analysed also fell drastically in 2020 during imposition of the lockdown. The number of mandis reporting arrivals of mustard dropped from 497 in 2019 to 152 in 2020.

Here, it is also important to bear in mind that a number of states – such as Haryana and Punjab which are the major wheat procuring states – had announced that the wheat procurement would begin only on April 15.

On the other hand, it also bears noting that the arrivals of both wheat and mustard were higher than the previous year in the pre-lockdown period.

The lack of operational mandis has also consequently meant that the quantities of crops coming into the markets have seen a drastic decline compared to the period of March 15 to April 14 from the last three years.

The quantity of chickpea coming into the markets declined by a staggering 94% this year, declining from 417,000 tonnes in 2019 to just 25,000 tonnes this year and is sure to have caused huge losses for the farmers as this was peak harvest season for chickpea.

Farmers of mustard have suffered massive losses, with its quantities declining by 96%. Mustard coming into the market is down to just 24,000 tonnes compared to 586,000 tonnes last year.

Last week, Matt Lowe and Ben Roth, writing for The Wire had also pointed to the decline in arrivals of vegetables by looking at data for the Azadpuri mandi in Delhi. They noted that quantities coming into the mandi fell by about 50% on March 24 and have remained at those levels since.

The analysis by Rawal and Verma also finds that despite the decline in supply prices have not increased commensurately. “This is likely to have been because of downstream disruptions in the supply chain and depressed demand (because of loss of incomes and employment for a large proportion of households),” they hypothesis.