Sudden drops in winter temperatures and extended dry spells during the monsoon have affected farm yields in this largely agrarian state in eastern India. 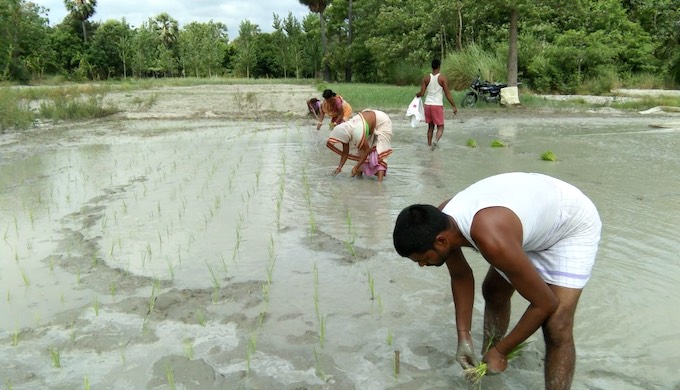 Paddy transplantation was delayed in Bihar this year due to an extended dry spell during the monsoon Credit: Mohd Imran Khan

Mahender Rai and Ramchander Yadav, smallholder farmers in India’s eastern province of Bihar, are not aware of the term climate change. But from bitter experience, they know the changes that have affected their harvests in recent years. They blame their fate for the erratic rainfall, extended dry spells during the monsoon and higher temperatures during summer, phenomena that increasingly result in poor spring and autumn harvests.

“Our rice sapling transplantation was delayed by over a month this Kharif (summer) season due to late arrival of monsoon, followed by poor rainfall along with high temperatures and a long dry spell from mid-June to third week of July, when normal rainfall is expected,” Rai said.

Climate change has already started affecting lives of millions of people in Bihar, a state anyway prone to disasters like floods and drought. Changes in seasonal patterns have reduced days of rainfall during monsoon and have resulted in shorter winters, all affecting the cropping pattern.

As per a vulnerability study conducted by Indian Council of Agricultural Research (ICAR) under the aegis of National Innovations in Climate Resilient Agriculture (NICRA) project, Bihar is the state most vulnerable to climate change impacts. Available evidence shows that there is high probability of increase in the frequency and intensity of climate-related natural hazards and increase in potential threats due to climate change-induced natural disasters in Bihar.

Climate change is a serious issue as far as sustainability of agriculture production in Bihar is concerned, according to Abdus Sattar, an expert at Rajendra Prasad Central Agricultural University (RAU) at Pusa in Samastipur district. In recent years, the impact of climate change has been pronounced due to frequent occurrences of extreme weather events such as erratic monsoon rainfall, extended dry spells, short duration rainfall, abnormal rise and fall of temperature particularly during the Rabi season in winter, he told indiaclimatedialogue.net.

As 60% to 70% of cultivation in Bihar is dependent on rainfall, any deviation, especially any deficit, is bound to impact production, particularly rice cultivation in the Kharif (summer) season and pulses, maize and wheat in some pockets in the Rabi (winter) season, Sattar said.

Agriculture is the backbone of Bihar’s economy and 77% of its workforce is dependent on it. It generates nearly 24.84% of the state domestic product, according to official data. 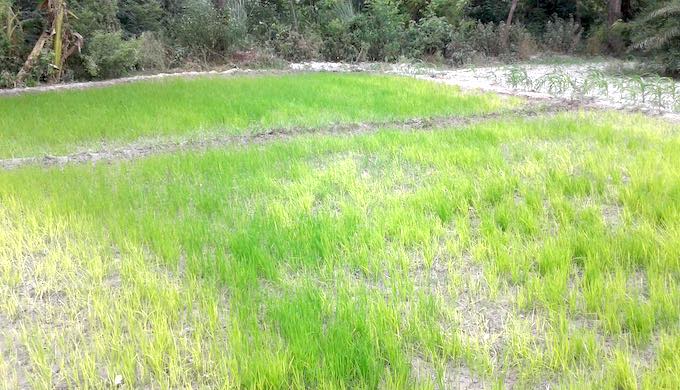 The dry spell in the middle of the monsoon season resulted in sickly paddy nurseries. Credit: Mohd Imran Khan

Bihar received deficit rainfall during the monsoon this year. The state government has admitted that there is a drought-like situation. “A long dry spell during early monsoon was a bad omen,” Yadav said. This affected paddy transplantation.

“We have suffered heavy losses due to poor maize crop earlier in the year. Officials and agricultural scientists informed us that it was the result of low temperatures during the critical phase of grain setting. Now, we have transplanted paddy saplings in mid August due to deficit rainfall. It was delayed and is bound to affect paddy quality and production,” said Rai, a resident of Rustampur in Vaishai district.

Sattar said the abnormal fall in temperature during January 2018 as well in 2017 severely impacted the maize grain setting and overall productivity. During the sensitive phases of wheat cultivation (between February 20 and March 10), heat stress was one issue for lower productivity of wheat, he said.

“We are fully dependent on normal and timely rainfall as well as proper temperature for preparing seedlings, transplantation, development and growth of Kharif and Rabi crops. But the change in weather has made life difficult for us,” Yadav, a resident of Auradih village in Khagaria district, told indiaclimatedialogue.net.

Rai and Yadav are two of hundreds of thousands of farmers in Bihar who are experiencing the impact of climate change. Landless farmers, who mostly work as farm labourers, and a small but growing section who are taking land on lease from landowners for agriculture, are hit just as badly.

Ramchander Singh, a resident of Motipur village in Samastipur district, had borrowed money from a local moneylender for maize cultivation in October 2017. But he incurred heavy losses after he found in mid-March that the maize plants were without grains. Like many others, Singh blamed extreme low temperature for this. “A long spell of cold wave during the critical period of grain-setting caused this,” he said. 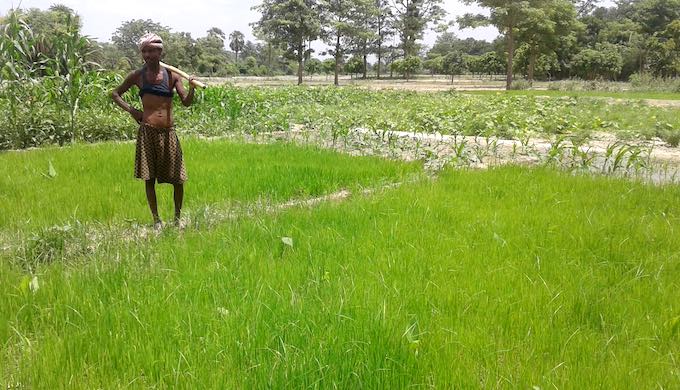 Surendra Nath, the state government’s divisional joint director, agronomy, Tirhut range, said this year paddy transplantation was delayed due to deficit of rainfall in July. “Delayed transplantation of paddy is bound to affect crops. It is clear that production of paddy will decrease.”

Bihar agriculture minister Prem Kumar had announced in the state assembly that the government would compensate maize farmers who incurred losses owing to maize plants not yielding grains.

According to the state agriculture department’s data, more than 100,000 farmers in 14 districts, including Khagaria, Samastipur and Vaishali, were affected. It is estimated that maize plants in 580,878 hectares did not yield grains. Bihar is India’s third-largest producer of maize.

Agricultural scientists fear that the delayed paddy transplantation will lead to a low yield. “As far as the impact of climate change is concerned, it has affected the Kharif paddy crop,” said Sushil Pathak, head of the Department of Agronomy at Bihar Agriculture University at Sabour in Bhagalpur. He said a severe heat wave in the third week of July was a reflection of climate change in the state. “Such a situation is bad for Kharif crops,” he told indiaclimatedialogue.net.

“Rice is one of the main crops of Bihar. But uncertainty and variance in rainfall due to more dry spells in the growth season are expected to impact the pest-pathogen build up and reduce rice yields,” Action on Climate Today-Climate Change Innovation Programme (ACT-CCIP) of DFID pointed out in its latest report on Bihar.

The impacts of climate change are clearly visible, according to Ujjawal Kumar, head of the division of socio-economics and extension at ICAR Research Complex for Eastern Region, Patna. Extreme cold in winter resulted in the problem of grain setting, he said. “All crops require a proper temperature. Low and high-temperature variation affect the crops,” Kumar told indiaclimatedialogue.net.

ACT-CCIP is working in Bihar for climate-resilient agriculture. “We are working with various state departments to address climate change impacts in agriculture. Vulnerability of the agriculture sector to climate change can lead to significant productivity losses,” said Pankaj Kumar, head of ACT in Bihar.