Several farmers and union leaders were arrested or detained ahead of a planned farmers' protest in Chhattisgarh and Section 144 was imposed in three districts. 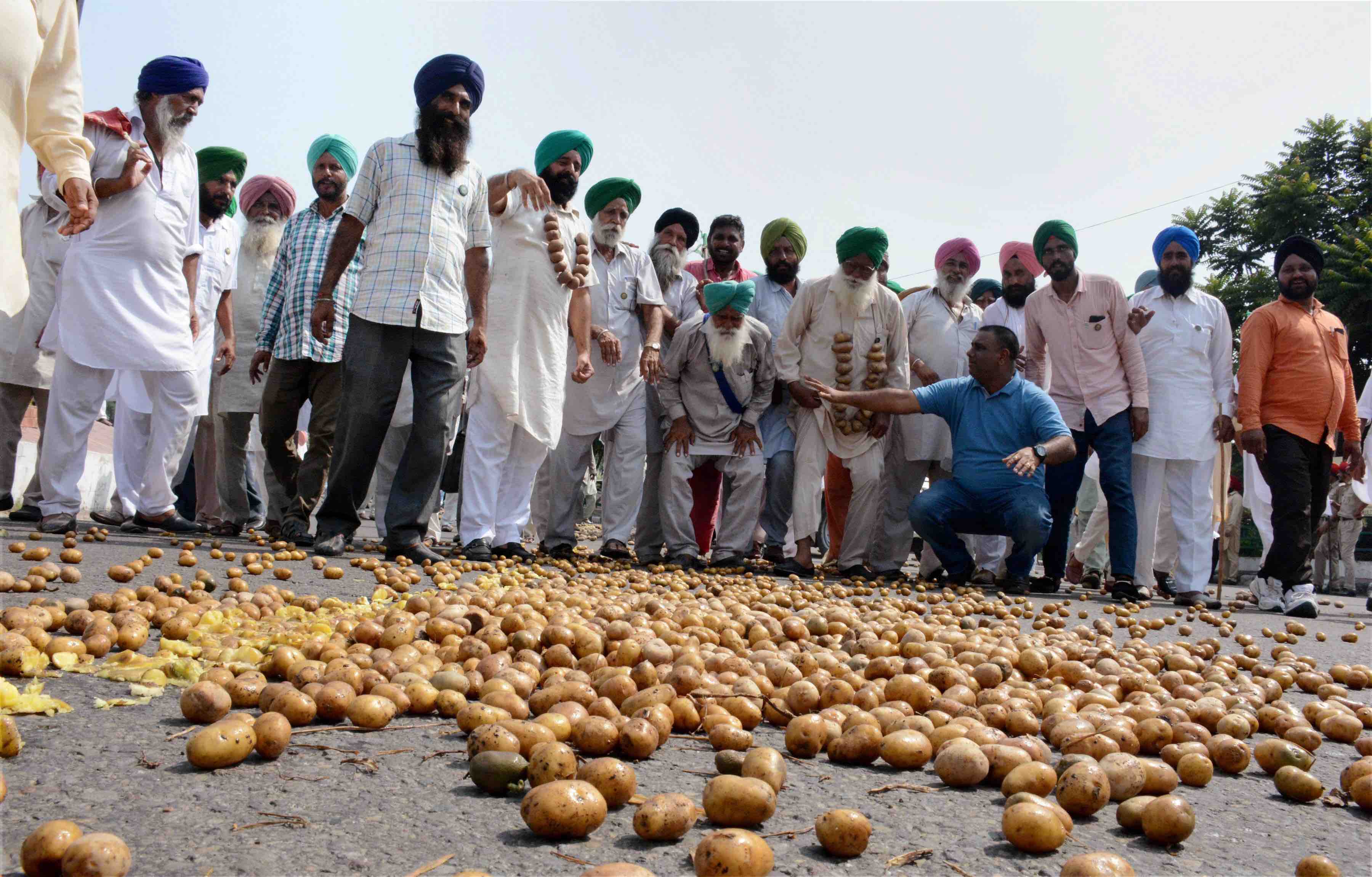 Farmers dump potatoes on a road in Mohali on Tuesday during a protest demanding a remunerative price for their crop. Credit: PTI

New Delhi: The Chhattisgarh police on Tuesday took action against farmers who were planning to launch a three-day rally heading towards chief minister Raman Singh’s house in Raipur. Several farmers and farmers’ leaders were arrested or detained, and Section 144 was imposed in Balod, Kabirdham and Rajnandgaon districts.

According to the Indian Express, government officials said they “had inputs” that the protest would turn into a law and order issue. The protestors, however, have said that democratic rights are being curtailed and demanded the immediate release of those taken to prison.

The three-day ‘Sankalp Yatra’, organised by the Chhattisgarh Kisan Mazdoor Mahasangh and Chhattisgarh Bachao Andolan, was to begin on Tuesday from Rajnandgaon. The farmers’ demands include implementation of the Swaminathan Commission recommendations, increasing the minimum support price for paddy and giving farmers the bonus they promised, among others, The Hindu reported.

“We were to begin the rally from Rajnandgaon, and reach Raipur by September 21 to demonstrate there. We had even spoken to the administration about the route. But late on Monday night, they began picking up our farmer leaders. Police spread out to prevent farmers from reaching Rajnandgaon. This is completely anti-democratic,” Chhattisgarh Bachao Andolan leader Alok Shukla told the Indian Express.

The police told the Indian Express that 26 people were arrested preventively and 36 others were sent to jail for the violation of Section 144. “We had inputs that there could be a law and order problem along highways and that they could act aggressively in Raipur as well,” Dipanshu Kabra, IG, Durg Range, told the newspaper.

However, Sanket Thakur, convener of the Chhattisgarh Kisan Majdoor Sangh, told The Hindu that close to 500 leaders and farmers had been taken into custody. “The police told us that they had intelligence inputs that the protest could turn violent. The fact is the State government delayed its decision to provide a bonus to paddy farmers and failed to curb the farmers’ unrest. They are scared of our protest and are making every effort to stop our rallies,” Thakur added.

Meanwhile, close to 50 farmers’ organisations who had gathered in Chandigarh for a two-day meeting have announced a Kisan Jagriti Yatra across the state to create awareness about the Centre’s “anti-farmer policies”, Indian Express reported.

Farmers in Lakhowal, who had started an indefinite strike on Monday because the state government had not released the payment of sugarcane, said they were forced to end the strike on Tuesday because the police detained them. The farmers planned to protest in front of chief minister Amarinder Singh’s house on Tuesday, News18 reported, but were stopped from entering the city by the police at the Chandigarh-Mohali border. Farmers threw their potato crop onto a Mohali road, demanding a remunerative price for the crop, and were also seen wearing garlands of potatoes, the channel continued. “There are no buyers of potatoes in Punjab which is leading to economic crisis. Hence, the farmers are left with no option except dumping the potatoes on the roads,” Harinder Singh Lakhowal, Bhartiya Kisan Union (Lakhowal) general secretary, told News 18.

“We’ll not end the protest unless our demands are met. We have informed farmers in all the villages of Punjab. They’ll start gathering in a large number tomorrow at Mohali,” he added.

Farmers in the Longowal region also clashed with the police on Tuesday. Police reportedly resorted to a lathi charge to disperse protestors, who responded by pelting stones. Five farmers, including two women, and two police officers were injured in the clashes, Indian Express reported. According to the farmers, the protests were triggered by the police conducting checks for making preventive arrests ahead of a five-day dharna of farmers in Patiala.

“The police were harassing us and unnecessary entering houses of villagers, who objected. However, the area SHO ordered a lathi-charge,” Jaswinder Singh, a leader of the Bharti Kisan Union (Ugrahan), told Indian Express. The special superintendent of police, however, denied that any ‘raids’ were carried out in the village ahead of the farmers’ dharna. He said the farmers attacked a police patrol car, fearing that their leaders would be arrested. According to the newspaper, the police have already arrested over 300 farmer union leaders ahead of a planned dharna from September 22-26 in Patiala.