Plans for the 'kisan march' from Nashik were drawn nearly a month ago, with CPI(M) leader G.P Gavit and his party workers visiting villages in five talukas, understanding their woes and preparing the Adivasis. 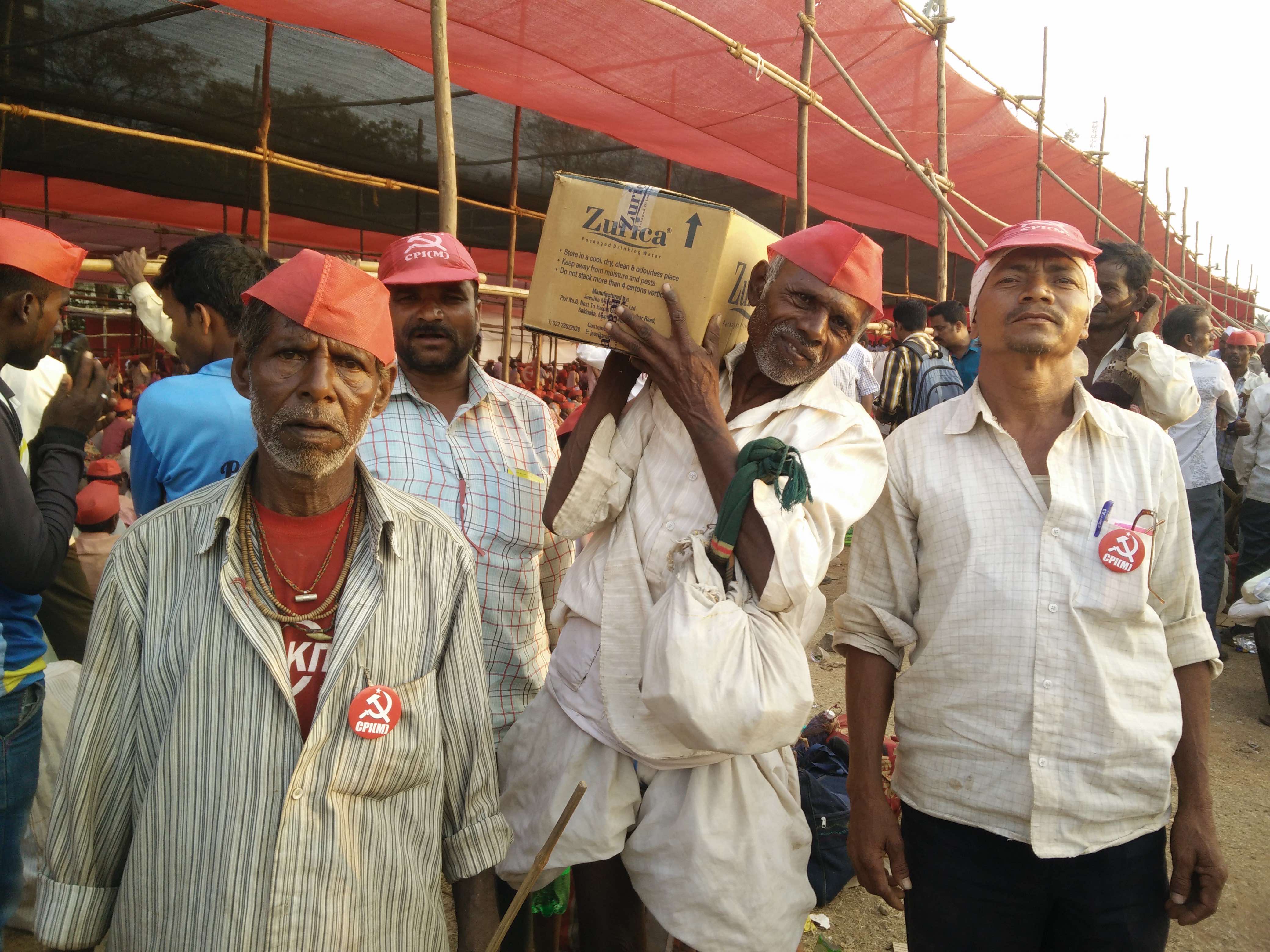 Ramu Bendkule (centre) leaves for his village Nashik with his relatives after the protest was called off. The Railways had arranged for special trains for the farmers to return to their villages in Nashik district. Credit: Sukanya Shantha

Mumbai: The mood suddenly turned jubilant at Azad Maidan, when announcements were made around 4 pm on Monday (March 12) that the demands of over 40,000 Adivasi farmers who had walked an arduous 180 km from Nashik to Mumbai were being met. The meeting that went on for over four hours between the 12-member delegation of the All India Kisan Sabha (AIKS), the organisation that organised the rally, and the six members team of the state headed by chief minister Devendra Fadnavis ended amicably with the state agreeing to almost all the demands. While the state decided to meet two of their nine demands, for the rest Fadnavis assured them that a committee would be set up.

As AIKS representatives began reading out the charter and the government’s response to them, many from the crowd who had been restlessly sitting through the day under the scorching sun began to get up. The sullen faces had suddenly lit up and farmers were seen greeting each other.  “After walking for six days and waiting here for an entire day, we could not have asked for sweeter news,” said 60-year-old Kamlabai. She had only gathered the term “karz maafi” (loan waiver) by that time. Kamlabai’s family which has been tilling three-acre land in Bej village in Kalwan Taluka has to pay off a loan of Rs 1 lakh. “We only grow seasonal crops like tur and ragi. For past three years my family has been trying to pay the loan off to the cooperative. I feel so happy to hear this,” she said with a wide grin.

The most important of the demands that were met on March 13 is the recognition of legal rights of those dwelling over protected forest land. The Adivasi communities living on these forest lands have been cultivating it for decades without the legal land rights as described in the Forest Rights Act 2006. Soon after the meeting, Fadnavis told the media outside Vidhan Bhavan that his government had agreed to almost all the demands. “We have agreed to set up a committee to hand over forest land used for farming, to the farmers. We have agreed to set up a committee to allot agricultural land to tribals provided they submit a proof of pre-2005 land cultivation. We have accepted almost all their demands,” the chief minister said.

At Azad Maidan, Ramchandra Waghere and his wife Surlata inquired, “Forestaachi zameen ti. Ata milel ka amhala? (That is a forest land, will we get it now?)” The couple, like most other Adivasis gathered at the rally, does not have the right over the land they have been cultivating for nearly 40 years.

Along with the rights over forest land, the protesting farmers had sought unconditional loan waiver, a committee for agricultural pricing and appropriate compensation for the pink bollworm attack, which reportedly affected over 35 lakh cotton farmers in the state. The protesters were mainly landless, utilising forest land for grazing and cultivation, or those with a small land holding of two-three acres. They had demanded regularisation of land which was being looked at as “encroachment”.

The protesting farmers were also opposing the planned water transfer through a couple of river-linking projects between Maharashtra and Gujarat. Fadnavis in the announcement said, “We have also agreed to the effective implementation of the Nar-Par-Tapi-Narmada and Damanganga-Pinjal river connectivity projects (both projects planned between Maharashtra and Gujarat) through which districts of north Maharashtra would get additional water for irrigation.” The chief minister also agreed to the farmers demand of implementation of the Swaminathan Committee report, which recommends that farmers should be paid 1.5 times the cost of production and the minimum support price should be fixed keeping this in mind. Bhika Dhom, a Kokana tribal at the rally with 40 petitions signed by farmers from his villages. Over thousand such petitions were submitted to the Chief Minister’s office on Monday. Credit: Sukanya Shantha

The protest rally comprised mainly of Adivasis from the five talukas – Trimbak, Peth, Surgana, Dhindori and Kalwan – of Nashik district. As the rally gained momentum, smaller organisations from the Marathwada region, Thane and Palghar district also marched along. The rally was essentially a show put together by seven-time elected legislator Giva Pandu Gavit. A veteran leader of the Communist Party of India (Marxist), Gavit has an impressive clout in his Kalwan constituency reserved for Scheduled Tribes and the neighbouring tribal belts. According to the protesters, the plans were drawn nearly a month ago, with Gavit and his party workers visiting villages, understanding their woes and preparing them for the protest march. Bhika Dhom, an Adivasi Kokana from Wadmal village in Surgana who has been cultivating two and half acres of forest land,  said in January itself it was decided they would be marching to Mumbai. “We were given forms to fill and notify our issues in it. I have gathered 40 forms just from my village. These forms were all collected from each village and handed over to the chief minister’s office,” Dhom told The Wire.

The trust that the villagers have in their leader Gavit is immense. “Toh amacha manoos aahe,” (he is our man) was the common line uttered by most protesters. Even as the CPI(M) lost its sheen in the region, Gavit has maintained his mass appeal. This, the villagers claimed, was because of his understanding of the ground reality and the trust that he would not let them down. On Monday, when Gavit made an impassioned speech asking the farmers to be prepared to go on indefinite hunger strike if their demands were not met, the gathering had reverberated with a “Lal Bavata Zindabad (long live, the red flag).” Motiram Dhom, a septuagenarian farmer from Trimbak Taluka announced, “Sadun marnyapekha, ladhun mara (It is better to fight and die than rot and perish).” 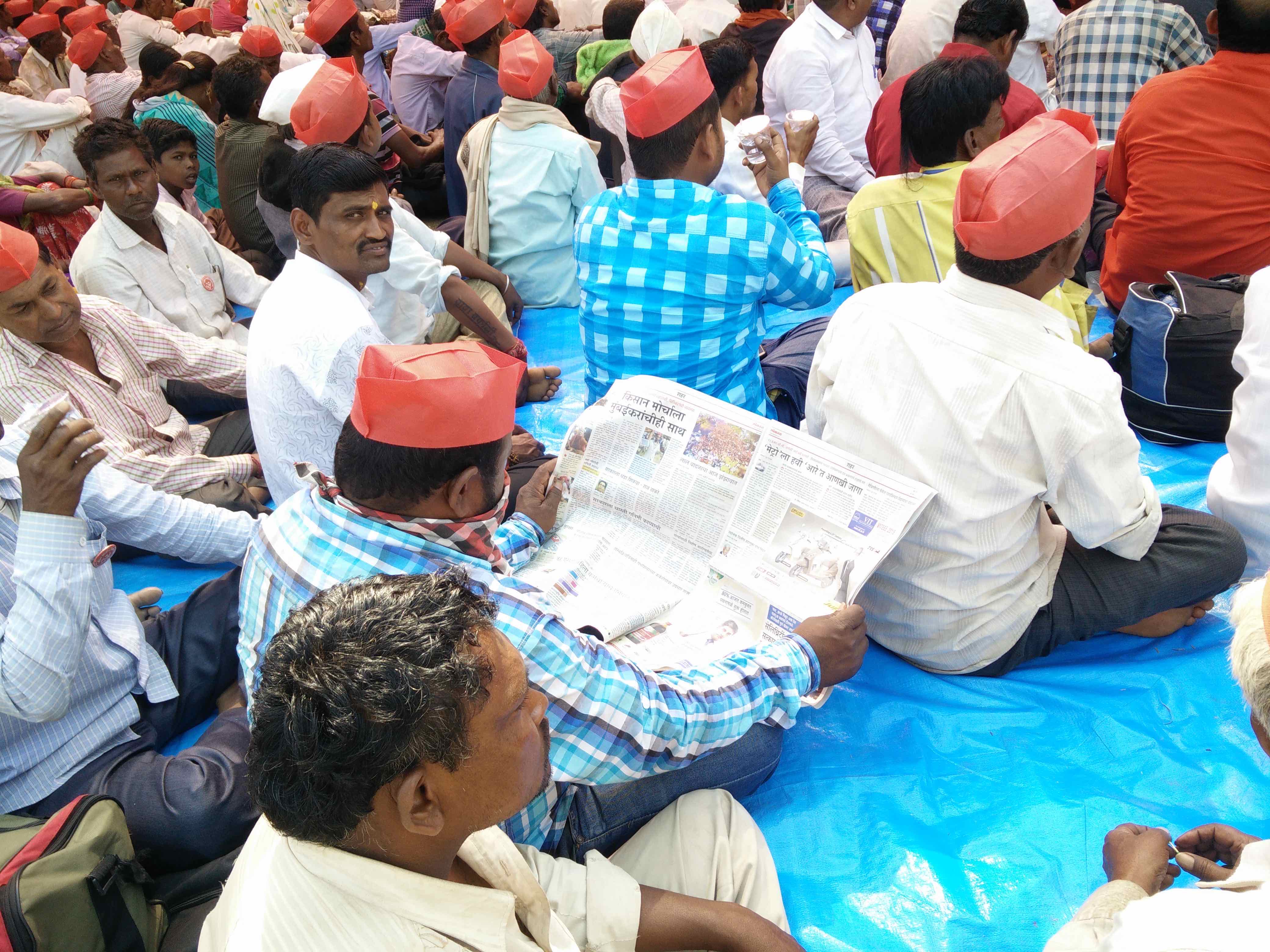 Farmers check out the newspapers during their protest at Azad maidan in Mumbai. Credit: Sukanya Shantha

This was perhaps one of the largest rallies organised under one banner in decades. The captivating images of red flags, red Nehru caps and women donning sarees with the CPI(M) party symbol of a sickle and hammer stood out in the rally. While all major parties like the Shiv Sena, Congress, Nationalist Congress Party, Aam Aadmi Party extended their support on the last two days of the rally, special care was taken to ensure that the protest did not get appropriated. When Congress state president Ashok Chavan and other party leaders walked on to the stage, his party workers were asked to not chant slogans for the Congress. In fact, Chavan left the stage, like most other leaders, shouting “Lal Salaam” to the gathering.

The six-day walk had left most marchers fatigued with heatstroke and dehydration. State- run JJ Hospital had arranged for medical camps at the entry of the ground. “Most of them complained of dehydration, low blood pressure, loose motions, fever and blisters. We have been providing them medication. But they need to rest now,” said Dr. Revat Kanide, who was at the ground with his team of doctors.

With blistered legs, although they had managed to rally on till the finishing line, Mumbai in their case, by the evening the protesters felt concerned over how to return to their villages. “I have no energy to walk back. I might just stay a day more at the ground here and decide how to plan my journey back home,” said 50-year old Ramu Bendkule said. A few minutes later he was seen leaving the ground with four others from his village. “Special trains have been arranged, someone just told me,” he told The Wire with a smile.