Jharkhand Mukti Morcha (JMM) activists participate in a rally in support of the nationwide strike, called by agitating farmers to press for repeal of the Centres agri-laws, in Ranchi, Tuesday, December 8, 2020. Photo: PTI

New Delhi/Chandigarh: Shops and commercial establishments were closed, transport affected and traffic disrupted as protesters squatted on roads and train tracks in several parts of the country on Tuesday in response to a Bharat Bandh called by farmers demanding a repeal of the new agricultural laws.

Emergency services were exempted and banks, too, continued operations as the pan-India shutdown, backed by most opposition parties and many trade unions, came into effect with the maximum impact expected in states such as Punjab, Haryana and Delhi, the epicentre of the snowballing protests.

Security was stepped up across the country, noisy demonstrations were held in many places and the numbers swelled at Delhi’s border points where thousands of farmers have been camping for the last 11 days. Protesters blocked railway tracks at several places in West Bengal, Bihar and Odisha.

During the bandh, home minister Amit Shah reportedly asked the farmers to meet him for talks at 7 pm this evening. This invitation comes a day before the sixth round of scheduled talks between the Centre and farmers representatives was to take place.

“I received a phone call. Amit Shah has called a meeting. We have been called at 7 pm,” farmer leader Rakesh Tikait told NDTV. Farmers protesting at Delhi borders would attend the meeting, he said.

So far, farmers have been adamant that they will not agree to anything except the total repeal of the three new laws. What happened in the states

From Jaipur, where mandis’ were closed but shops open, there were reports of clashes between workers of the state’s ruling Congress and the BJP.

However, the protest was mostly peaceful in other parts of the country. In the national capital Delhi, where most main markets were open but app-based cabs off the roads, tension spiralled with the ruling Aam Aadmi Party (AAP) alleging that the Delhi Police had put chief minister Arvind Kejriwal under house arrest.

City police denied the claim but the party stuck to its guns and said the move was a response to Kejriwal meeting protesting farmers at the Singhu border, the main access point for those coming to the city from Punjab.

“No one has been permitted to leave or enter his residence… When our MLAs went to meet the chief minister they were beaten and thrown on the streets,” said party leader Saurabh Bhardwaj.

Joining the Bharat Bandh call, some auto-rickshaw and taxi unions also took their vehicles off the roads in the city.

Farmers’ unions had said they would block national highways and occupy toll plazas across the country during a ‘chakka jam’ protest from 11 am to 3 pm, part of the bandh that comes a day before the Centre meets representatives of the farmers for another round of talks on Wednesday in a bid to resolve the impasse. Members of All India Kisan Sangharsh Coordination Committee (AIKSCC) along with various organisations participate in a protest in support of the nationwide strike, called by farmers to press for repeal of the Centres agri laws, in Chennai, Tuesday, December 8, 2020. Photo: PTI/R. Senthil Kumar

All India Kisan Sabha general secretary Hannan Mollah described the shutdown as a show of strength by the farmers. “We are standing by our demand that we want a complete repeal of the three laws and will not accept any cosmetic changes If our demands are not met, we are ready to take our agitation to the next level,” Mollah said.

The protesting farmers fear the new laws will pave the way for eliminating the safety of the Minimum Support Price cushion and do away with ‘mandis’, leaving them at the mercy of big corporates.

Farmers from Punjab and also Haryana have been the drivers of the movement. In Punjab, shops and commercial establishments were closed as were 3,400 fuel pumps. From morning, farmer leaders appealed to shopkeepers and traders to keep their shutters down.

All major parties in Punjab – the ruling Congress, AAP and the Shiromani Akali Dal – have also extended their support.

In neighbouring BJP-JJP ruled Haryana, opposition parties Congress and Indian National Lok Dal extended their support. Farmers assembled on highways and other key roads in both states since morning. “Everyone should hold a peaceful protest,” Haryana BKU chief Gurnam Singh Charuni said in a video message.

The Haryana Police traffic advisory warned that main national highways would be closed and the peak time of impact is expected to be between 12 noon to 3 pm.

In West Bengal, where the ruling Trinamool Congress has joined the Congress and the Left in supporting the shutdown but has stayed away from enforcing it, the response was mixed. Life was disrupted with the railway tracks being blocked in several places and sit-ins on major roads and private vehicles off the roads in many parts of the state. However, public transport, including buses and taxis, operated though in fewer numbers.

Life was hit in Bihar too with train tracks, highways and inner roads teeming with protesters as opposition parties extended their support.

RJD supporters, and workers of Pappu Yadav’s Jan Adhikar Party fanned out to various parts of Patna, forcing shopkeepers to down their shutters and deflating tyres of vehicles plying on the roads.

In Jehanabad, the movement of Patna-Palamu Express was obstructed for a few minutes until the bandh supporters, squatting on the tracks, were chased away by the police.

Train services were also affected in Odisha as activists of farmers’ organisations, trade unions and political parties held sit-ins on tracks in Bhubaneswar, Cuttack, Bhadrak and Balasore. Elsewhere in the state, ruled by the Biju Janata Dal, normal life was hit with markets and offices shut and Congress and Left supporters blocking major roads.

Major cities in Congress-ruled Chhattisgarh, including its capital Raipur, wore a deserted look too with most business establishments closed and public transport keeping away.

“At least 36 farmers, labourers and social organisations led by the Chhattisgarh Kisan Majdoor Mahasangh (CKMM) have been staging protests at various locations in the state in support of the shutdown,” said CKMM’s Sanket Thakur.

Neighbouring Madhya Pradesh saw sporadic demonstrations, particularly in Seoni-Malwa in Hoshangabad district where protesters under the banner of the Krantikari Kisan Mazdoor Sangthan (KKMS) raised slogans and demanded a rollback of the laws. 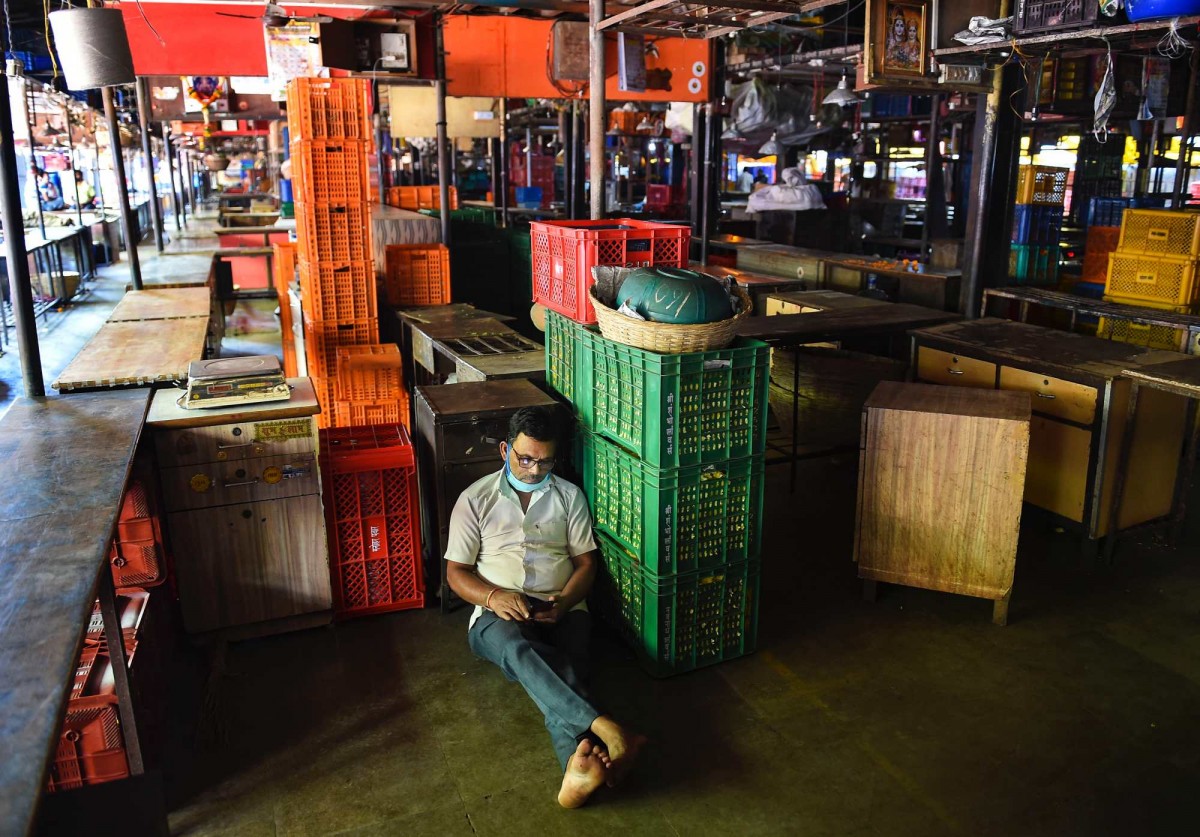 A vendor rests in the deserted Dadar wholesale flower market during the nationwide strike, called by agitating farmers to press for repeal of the Centres agri-laws, in Mumbai, Tuesday, December 8, 2020. Photo: PTI/Kunal Patil

In Maharashtra, where the ruling Shiv Sena-NCP-Congress combine has extended its support, wholesale markets in major cities like Pune, Nashik, Nagpur and Aurangabad were shut. Retail shops also downed shutters in many cities.

The state government appealed to protesters to not disrupt public transport services and buses and local trains were unaffected till afternoon.

“The situation needs to be created to put pressure on the government, and to achieve this, farmers need to hit the streets. But no one should resort to violence,” said social activist Anna Hazare who went on daylong fast in his village Ralegan Siddhi village in Maharashtra’s Ahmednagar district.

In several parts of the country, including in Meghalaya and Arunachal Pradesh, life continued unimpeded. In BJP-ruled Goa as well, markets remained open and public transport was also normal.

The three contentious laws at the centre of the farmer protests are the Farmers’ Produce Trade and Commerce (Promotion and Facilitation) Act, 2020, The Farmers (Empowerment and Protection) Agreement of Price Assurance and Farm Services Act, 2020 and The Essential Commodities (Amendment) Act, 2020.