Around 57 farmers' unions have collectively issued a letter to the farmers of Uttar Pradesh and appealed to them to consider that BJP's promises to farmers remain unfulfilled. 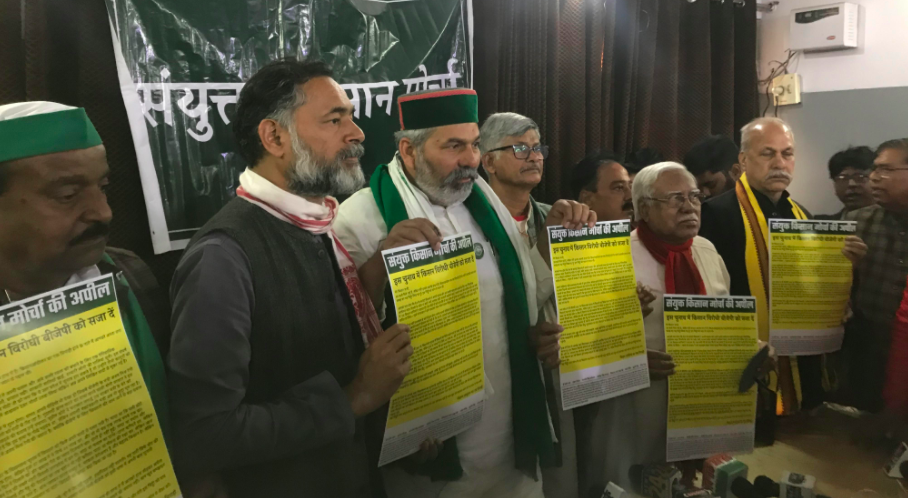 Lucknow: The Samyukt Kisan Morch (SKM) has accused the Bharatiya Janata Party of betraying farmers and urged voting farmers to ‘punish” the saffron party in the ongoing Uttar Pradesh elections.

Around 57 farmers’ unions have collectively issued a letter to the farmers of the state and appealed to them to vote against the BJP. According to the farmers’ leaders, the Union government did not fulfil promises made to them at the end of a year-long protest against the agricultural laws.

SKM leaders on Monday, February 14, visited Lucknow and interacted with the media on various farmers’ issues. SKM leaders plan to visit several villages as part of the campaign to inform farmers about “anti-farmer policies” of the Modi government.

However, the SKM did not extend support to any of the opposition parties, urging people to take decisions based on their local circumstances.

Also read: A Grim Future: What Happened to the Promise of Doubling Farmers’ Income by 2022?

Farmers also expressed their anger with the BJP for not removing Minister of State for Home, Ajay Mishra ‘Teni’, from the Union cabinet. Teni’s son Ashish is the prime accused in a case involving the mowing down of four farmers at Lakhimpur Kheri.

Reiterating the demand for Ajay Mishra’s removal from post, Tikait also said that Prime Minister Narendra Modi withdrew the controversial farm laws only because of the massive farmers’ agitation in which 700 farmers lost their lives.

“This time the BJP has failed to polarise the elections in the name of Pakistan, Jinnah, etc., so it raised the issue of hijab in the southern Indian state of Karnataka,” he added.

Farmers’ stress on an anti-BJP movement may influence rural voters.

In the letter to farmers, the SKM leaders stressed on the government’s handling of the Lakhimpur incident.

Farmers’ leader Hannan Mollah said in Lucknow, “The Adityanath government made tall claims on law and order but did nothing against the son of the minister who killed protesting farmers.” Mollah, general secretary of the All India Kisan Sabha, also stated that it was time to punish the party that had broken all of its promises, as the government had not waived farmer loans nor cleared sugarcane farmers’ dues on time.

Yogendra Yadav of Swaraj India raised the issue of power tariffs and said that Uttar Pradesh’s farmers have been paying the highest power tariffs in India. Yadav said that on every front the BJP has let down farmers, neither procuring paddy and wheat, nor handling the stray cattle problem.

Yadav told reporters that the BJP is “inhuman” and highlighted how farmers faced police crackdowns several times during their yearlong protest. “The party understands only the language of election, so farmers would reply to it in the form of a vote,” he said.

Resentment of the farmers is also brewing as the government is yet to withdraw cases filed against them during the protest.

Farmers’ leaders also expressed their annoyance with the BJP government for not giving ex-gratia to the farmers who lost their lives during the protest against the Modi government.

Issues of employment, education, and health also remained on the forefront.

Farmers announced that they will visit the home turf of chief minister Adityanath, Modi’s parliamentary constituency of Varanasi, along with Allahabad to appeal to the farmers to dislodge the BJP from power.