As Bayer and Monsanto Merge, Watch Out for What Happens to Our Food and Farmers

On World Food Day – October 16 – it is essential that the consequences of the growing concentration of corporate control over seeds, agri-chemicals, food and farming systems be understood for what they are. 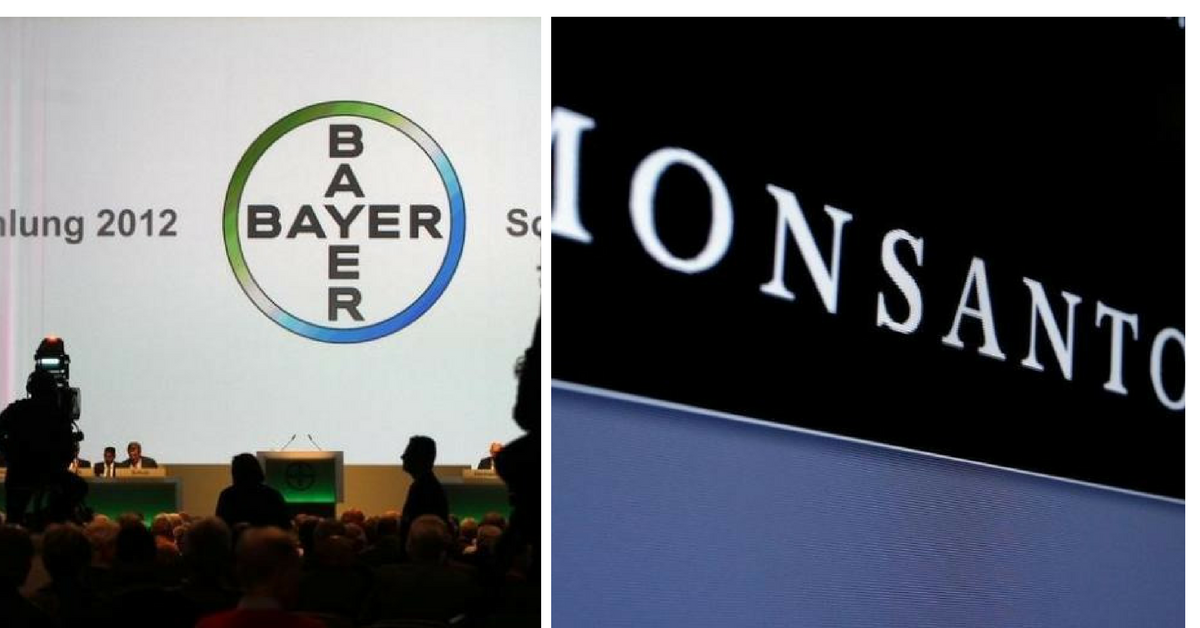 Monsanto is displayed on a screen where the stock is traded on the floor of the New York Stock Exchange. Credit: REUTERS/Brendan McDermid

The $66 billion purchase of the world’s biggest seed company, Monsanto, by the German chemicals conglomerate Bayer still has to pass the gauntlet of regulatory agencies in the United States and the European Union but the merger is already being seen as part of a trend in these increasingly related industries.

These three massive mergers are not an aberration but reflect the magnifying of an already well-established trend of the coming together and concentration of global seeds and agri-chemicals industries.

Till just about four to five decades  back, the situation was very different as the seed sector consisted of a larger number of small companies. The introduction of exotic varieties via the spread of the so-called green revolution technology started to rapidly erode the self-reliance of farmers in matters relating to seeds. As more and more farmers started coming to the market to purchase seeds, the prospects of seed companies became much bigger and brighter. This started the drift towards concentration in the industry.

However, before investing big in the seeds sector, these companies wanted assurances on the patenting of seeds. To ensure this in record time in over a hundred countries, patents were introduced via the World Trade Organisation regime and now seed companies had access to stronger international patents.

The next step was to push for the technology of genetic engineering and genetically modified or GM crops, as these offer greater scope for corporate control and breeding compared to conventional, non-proprietary crops.

All the three stages were accompanied by the advent of bigger companies in the seeds sector – which went on a spree of acquisitions across the sector to consolidate their hold.

Parallel to the process involving exotic seeds and the green revolution was another trend – of bringing the seeds businesss closer to agri-chemicals such as pesticides and weedicides. This trend was also consolidated by the stronger patents regime and the advent of GM crops, as many GM crops were engineered to respond to the herbicide, weedicide or pesticide manufactured by the same company or its collaborator. All along this path, the seeds and agrichemicals sector started to get more and more concentrated.

By the year 2011, this consolidation had increased to such an extent at the global level that just three companies had captured a 53% share of the seeds market. This included a 26% share of Monsanto, 18% share for DuPont Pioneer and 9%  for Syngenta.

Around the same time, the statistics for agri-chemicals revealed that the top three companies at the global level had captured a 52% share of the market. This included 23% for Syngenta, 17% for Bayer Crop Science and 1% for BASF.

While this was rightly regarded as a very high level of concentration even at that time, it is clear that this concentration is set to increase further with the big mergers of this year and the previous year. If all these mergers go through as appears likely, Tom Philpott of Mother Jones has predicted a possible situation in which three biggest companies – Bayer-Monsanto, Chemchina-Syngenta and Dow-Dupont – may sell 59% of the world’s patented seeds and 64% of all pesticides.

Clearly, such high levels of concentration are not good for farmers and the food system. With such a high level of concentration, it will be easy for these companies to over-charge farmers. However, what may be even more harmful is that these giants can use their enormous resources to influence policy makers in such a way that farm policies based on the products of these dominant companies are pursued or encouraged. In such a situation, it is possible that many farmers may get trapped in a high cost and possibly ecologically destructive farming system that uses the seeds sold by these giant companies and which have to be accompanied by heavy doses of agri-chemicals produced by the same companies or their subsidiaries.

Food produced using high concentrations of agri-chemicals will be hazardous. These companies are also likely to push for GM food crops, perhaps short-circuiting regulatory mechanisms that governments have put in place to study their impact.  The options for farmers to move towards self-reliant and eco-friendly alternatives are likely to be reduced significantly. Many small and low resource farmers may not be able to continue high-cost farming and this can accelerate a trend towards concentration of land ownership in fewer hands – or even corporate farming or contract farming tied to corporates.

On World Food Day – October 16 – it is essential that the consequences of the growing concentration of corporate control over seeds, agri-chemicals, food and farming systems be understood for what they are. In India, the government should support low cost, eco-friendly farming systems involving the close co-operation of small farmers and rural communities, including provision of some farmland for all landless people particularly Dalits.

Bharat Dogra is a freelance journalist who has extensively covered agriculture and the problems of rural India.