Farmers have said they will not back down from their planned protests. 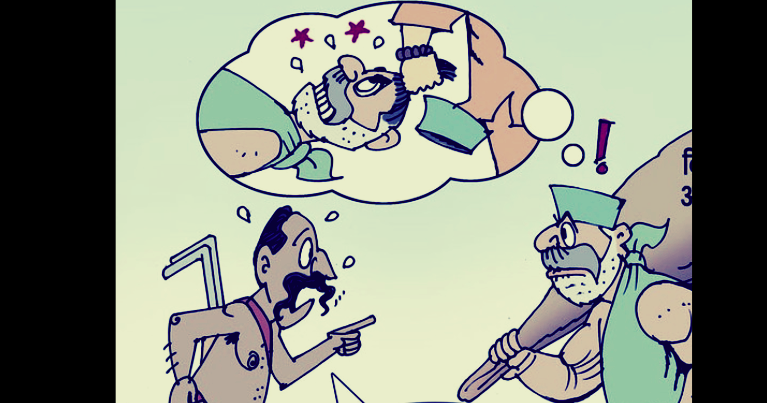 A detail from the cartoon posted by the BJP UP page on Twitter.

Lucknow: A cartoon posted by the Twitter handle of the Bharatiya Janata Party’s Uttar Pradesh unit was seen by many as an open threat to the farmers’ leaders who have announced protests across Uttar Pradesh and Uttarakhand in September.

The leaders themselves, however, said they were not intimidated and would not call off their demonstrations under pressure.

The verified handle of ‘BJP Uttar Pradesh’ (@BJP4UP) posted the cartoon on July 29. It features a strongman advising a protesting farmer against going to Lucknow, in Uttar Pradesh, to protest because ‘Yogi’ is sitting there and he would take certain steps.

A rough translation of what the strongman tells the farmer is as follows, “Heard that you are going to Lucknow. Don’t get into a clash with anyone. Yogi is sitting there, he will get you beaten (or peel off your skin) and your poster will be pasted on the walls of the city.”

The farmer is also shown imagining that he will be dragged by his hair.

The cartoon has triggered an uproar in political circles as well as among supporters of the farmers’ agitation. Farmers have been protesting against the three farm laws brought by the Narendra Modi government at the Delhi border for the past few months.

Tikait had also said that if the government tried to stop them, the farmers would turn Lucknow’s borders into protest sites, as they did in Delhi.

Yogendra Yadav said that under the aegis of the Samyukt Kisan Morcha, the farmers would also protest in Uttar Pradesh on local issues such as minimum support price of crops, unchanged State-Advised Price (SAP) for sugarcane, the problem of stray animals, etc.

Yadav told The Wire that in Uttar Pradesh, Adityanath has been crushing mass movements as his party does not believe in a democratic system.

He added, “By publishing a cartoon, the BJP itself shows its real face to the public”. He also said that the farmers would not call off their protest under any fear or pressure.

Also read: The Story Behind the Villagers Who Tried to March to Adityanath’s House With Cows

Opposition parties have criticised BJP for its intimidating cartoon ahead of the protest. They termed it undemocratic and an open threat to farmers who want to protest lawfully.

Principal opposition party Samajwadi Party (SP) said that in the cartoon, the BJP reflected its thoughts and ideology towards the poor and farmers. Legislative council member from SP, Sunil Kumar Sajan, told The Wire that right-winger thinkers and supporters have done their best to defame the farmers’ protest, first by dubbing agitating farmers Khalistani and Maoists, and now by calling them them mawaalis.

“The cap which is seen falling off the head of the farmer in the cartoon is in fact the pride of the farmer. The cartoon reflects the arrogance of chief minister Yogi Adityanath,” the MLC said.

The Congress also condemned the cartoon. Party state president Ajay Kumar Lallu told The Wire, “Congress is with farmers at every front and we will not allow the arrogant regime to muzzle the farmers’ protest.”

Lallu went on to say that with the cartoon, the government has given a loud and clear message that it wishes to cripple the protest with the use of “hooliganism.”

A farmer from Prayagraj, Anoop Singh, said that it is not permissible in a democracy to stop anyone from protesting. “Farmers have announced such protests in many other states, most recently in Bengaluru, but no one has used such rhetoric against us except the BJP in Uttar Pradesh,” he said.

State secretary of All India Kisan Union, Mukut Singh, also decried the BJP and said, “BJP should remember that India is a democratic country where a dictator-like attitude is never acceptable.”

Singh also said that earlier, Haryana’s chief minister Manohar Lal Khattar had also tried to crush the farmers’ agitation forcefully but had failed to do it. “The Yogi government will also be embarrassed as farmers will not retreat,” he said.

Senior political analyst Ramdutt Tripathi said that such cartoons on the BJP’s social media handle was an acknowledgement of BJP’s support for oppression of voices of dissent.

When contacted, the BJP’s Uttar Pradesh unit dismissed allegations of intimidation. Party state secretary Chandra Mohan said that the cartoon published on the social media handle has “nothing to do with the agrarian distress”.

“Maintaining law and order is our priority and we do compromise with anyone on this issue,” he added.