After Victory, the Farmers Must Not Lose Sight of the Big Picture

In staring the government down, the farmers have created hope where none existed. 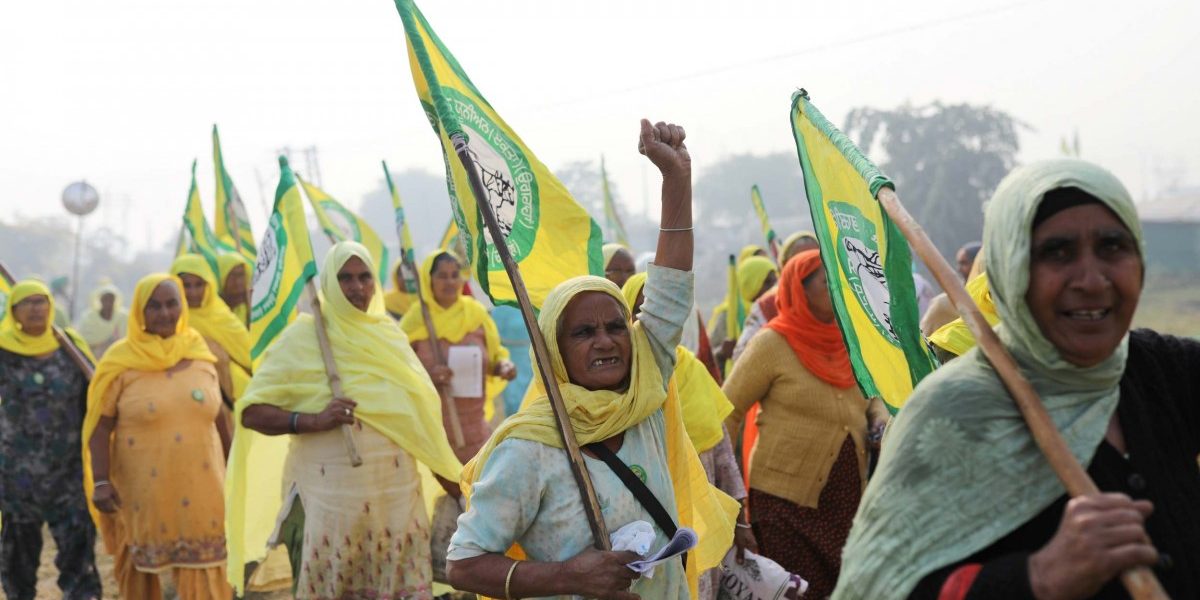 Farmers gather to mark the first anniversary of their protests on the outskirts of Delhi at Pakora Chowk near Tikri border, India, November 26, 2021. Photo: Reuters/Anushree Fadnavis

Credit should be given to the agitating farmers for taking the bull of neoliberal policy by the horns and blunting its debilitating impact. They have also unmasked the backers of big corporates in the political leadership, bureaucracy and media, not to speak of the agricultural “experts” and “economists”, of dubious competence and credentials, who support corporate agendas.

This success would not have come without a united struggle by farmers supported by disadvantaged sections of society like labour, students, unemployed youth, contractual workers etc, who have also suffered from the government’s neoliberal policies. The most significant outcome is the formation of the Samyukta Kisan Morcha (SKM) platform, consisting of 32 farm unions backed by about 500 organisations nationally. Unity of people cutting across caste and religion is what India’s rulers fear most, as it can tear apart the polarising “us versus them” narrative necessary for perpetuating their exploitation.

Withdrawal of the controversial laws was a foregone conclusion. Every narrative spread through compliant and now discredited media fell apart as people shifted to alternative news platforms, social media and YouTube. After every trick to crush, divide and defame the movement had failed, PM Narendra Modi realised that it was time to cut losses and announced withdrawal of the three controversial laws. Meanwhile, farmers had to face every kind of repression and braved weather adversities in the year-long protests. More than 700 agitating farmers lost their lives, and millions suffered hardship.

In fact, before the announcement came, despondency had set in as all the enforcement agencies of the government were being used to suppress dissent and target those opposed to the BJP’s policies. The pall of gloom and helplessness that had engulfed this country after every institution was subverted, justice blatantly denied, and constitutional guarantees undermined with impunity is slowly lifting. In staring the government down, therefore, the farmers have created hope where none existed.

Another positive outcome of the protracted agitation has been the creation of unprecedented awareness among the masses about their political and economic rights, which can’t be addressed by those whose elections are bankrolled by the very corporates against whom they are pitted. The credibility of the political class is so low that farmers have refused to call off their agitation despite the prime minister’s promise of repeal.

They know well how every political party that assured them a proper minimum support price (MSP) for their crops has deceived them after getting their votes and coming to power. As the SKM demand for MSP takes centrestage, a campaign against it has already been unleashed in the media by the very people who had supported the controversial farm laws.

Also read: Why the Farmers’ Protest Has the Potential to Challenge BJP’s Hindutva Politics

The repeal of the farm laws will not end the agrarian crisis or growing inequality and concentration of wealth. Granting MSP is the next logical step to boost the income of farmers, who constitute about 50% of Indian households. Rather than unleashing repression once again, it is in the broad interests of the nation for the government to initiate a dialogue with farmers to implement MSP.

Once MSP is granted, the nation would expect farmers themselves to come forward with a plan for improving farming methods so that income support, food security, better nutrition and environmental protection can all go hand in hand. The COVID-19 pandemic and climate change have held up a mirror to humanity. The pursuit of growth cannot be on the basis of ‘business as usual’ practices.

Besides, the platform of SKM should be widened to include other disadvantaged people who are also being pushed further down the economic ladder. The broader coalition of mass organisations should set a national agenda and require all political parties to work for the equitable distribution of wealth. SKM bears the responsibility to form this broad coalition and carry everyone along to secure for the people of India justice, liberty, equality, and fraternity, which should not remain confined to the Preamble of our Constitution.