In spite of the fruit being a vital part of the state's economy, no government has attempted to take up large-scale irrigation efforts to help growers. 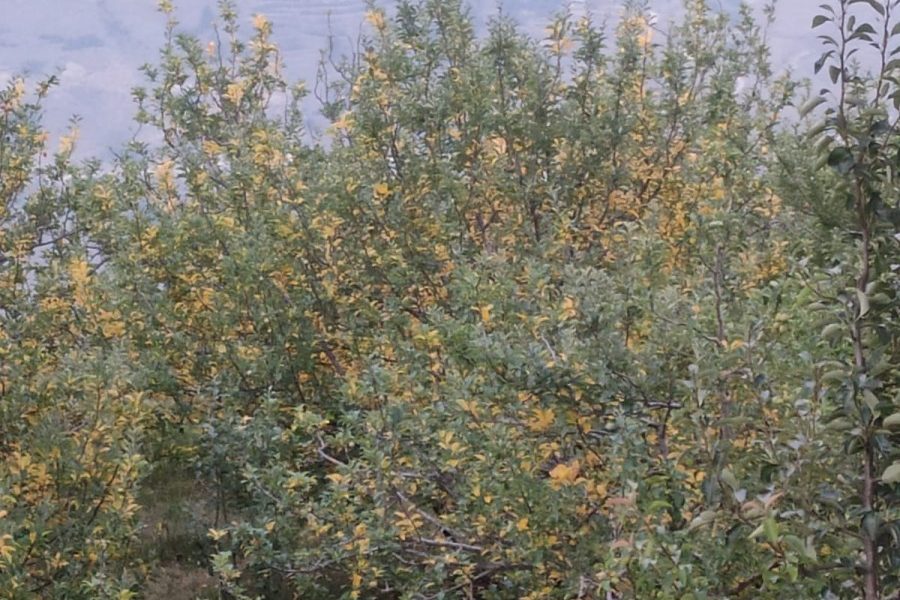 Chandigarh: Dimple Panjta, an apple grower from Rohru in Shimla district is distressed ahead of harvesting season.  He tells The Wire that he never saw the hills of Himachal as warm and in need of rainfall as now.

For Panjta, more than the discomfort, was the direct consequence this had on the apple crop.

“Approximately 30% of the crop is already damaged in my orchard,” he says.

By ‘damaged’, Panjita explains, he means that the fruit has cracked and has stopped growing in size. “Premature dropping of the fruit is another common problem. Spots on the fruit are also visible,” he adds.

Cracked and rusted apples, categorised as ‘Grade B’ and ‘Grade C’, are not sold in the main market. A healthy crop fetches its farmers Rs 60-70 a kilogram. But these apples are sold at no more than Rs 5-10 per kilogram.

The economic cost of this is enormous.

An apple grower from Shimla, Kunal Chauhan, tells The Wire that the worst is not over yet because 90% of the apple crop in the Himachal is rain-fed.

The current apple season was the worst in terms of rainfall and the situation has not improved in the month of June.

“By the time harvesting begins next month from July 15, there may be more damage,” he adds

The weather in the months of March, April and May – when the apple crop is in various stages of physiological growth – was unfriendly to the crop.

As per a Delhi-based Centre for Science and Environment report, which was based on the analysis of Met office data, there were 21 heatwave days in Himachal between March and April this year, the third highest after Rajasthan and Madhya Pradesh. In May, the state had four heatwave days.

On the other hand, there was record breaking rainfall deficiency. As per data obtained from the Himachal Pradesh Met department, the state witnessed huge 95% and 90% deficient rainfall in the months of March and April.

According to HP Met director Surender Paul, this was the worst rainfall season since 2002.  Paul tells The Wire that rainfall has since improved but continues to be below normal.

For instance, the state recorded 23% deficient rainfall in the month of May, the worst since 2018. The current month of June (from June 1 to June 22) is again 37% rainfall deficient.

In areas like Kinnaur, known for its good quality apples, rainfall deficiency is as high as 60%, official data says.

Also read: Adani in the Eye of the Storm as Himachal Apple Prices Crash

Explaining how the heatwave has affected the apple crop, Dr S.K. Bhardwaj, head of Environmental Sciences at Dr Y.S. Parmar University of Horticulture and Forestry at Solan told The Wire that every crop has its physiological development stage, which is called phenology in technical terms.

Bhardwaj says the acute rise in temperature in Himachal this time has altered the apple crop’s physiological growth.

Premature blooming of flowers on apple plants in the month of March – which otherwise bloom in phases over several weeks starting March – was followed by severe drought conditions, which worsened the situation in terms of flower drops.

Then there was a spell of hailstorm. “All these weather-induced events must have affected the development of fruit,” he adds.

Ashit Singha, an apple grower from Kotgarh in Shimla district, tells The Wire that the orchards below 6,000 feet suffered more.

But it is not just the heat and elevation, he says.

“Every year, apple growers replace their old orchards with new plants, which take years to bear fruits. As per feedback from the ground, 70-80% new plantations could not survive this heatwave,” he says.

Even old plants were left at risk of a fungal disease called ‘Canker’, which can even result in the death of the plant, he adds.

Dimple Panjta of Rohru says while the apple crop has a huge role to play in the state’s economy – “annual apple business from the state is more than Rs 3000-4000 crore” – there was never a large-scale effort to develop irrigation for the apple crop.

He says that 90% of the apple crop is rainfed. “A decade ago, there was a scheme by the state to create irrigation sources via rainwater harvesting. The government made water tanks in apple belts too. But the scheme was not properly implemented. It was a pure waste of public money,” he adds.

Panjta said that there was never a proper crop insurance scheme for apple growers that could mitigate their losses in times like these.

R.K. Pruthi, director of the HP horticulture department shared data with The Wire which has revealed the loss of Rs 50 crore to the apple crop this year due to drought and hailstorm.

Meanwhile, experts point out that the time has come to find the right solutions to mitigate the changing climatic conditions in hilly areas.

Dr S.K. Bhardwaj told The Wire that there are studies which clearly show that some of the traditional apple varieties which had sustained the apple economy for three to four decades are not getting the right kind of climate conditions to flourish now.

“There are two ways to deal with it. First, farmers must go for crop diversification. Second, the ageing orchards must be replaced with those apple varieties that can adapt to the changing climate,” he adds