A Month After Long March, Have Farmers' Demands Been Fulfilled?

The focus of the Maharashtra farmers' march was on land rights for Adivasi communities. That promise will take a while to fulfil, and not much headway has been made. 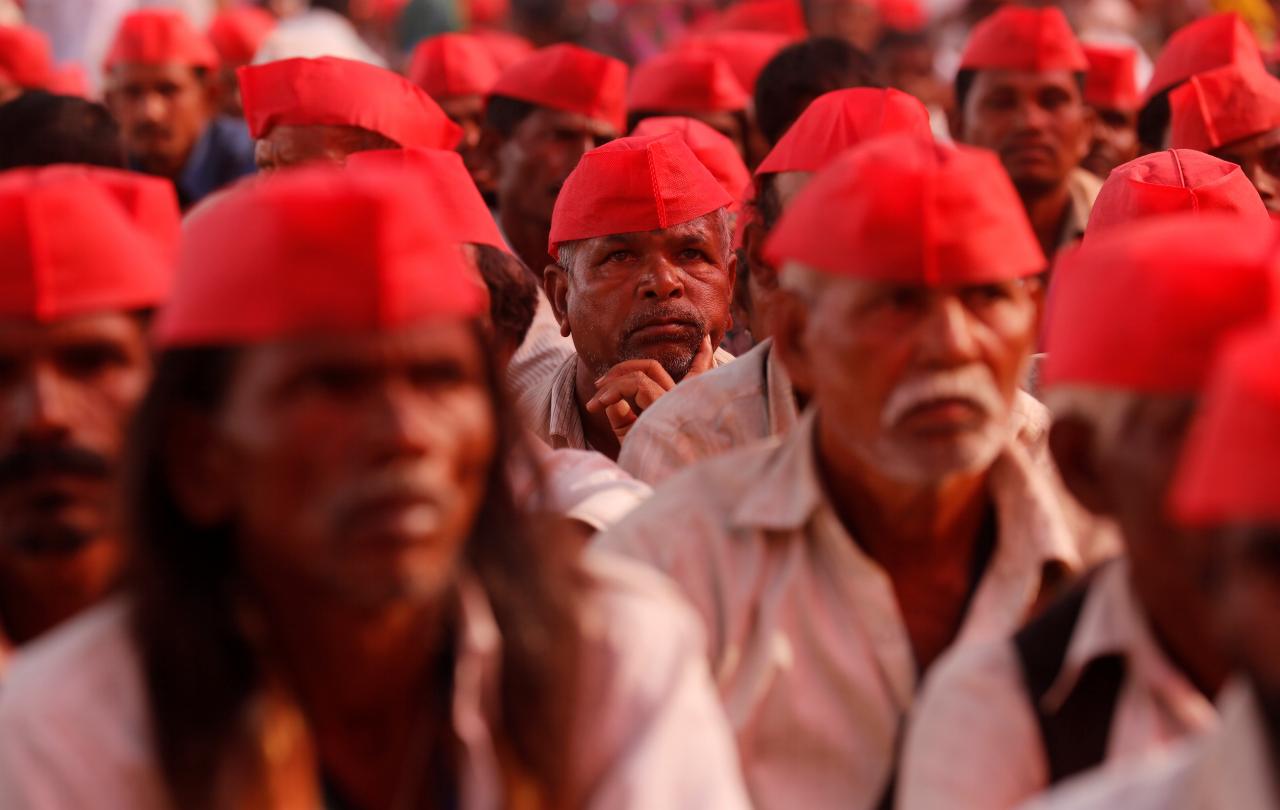 Farmers listen to a speaker at a rally organised by All India Kisan Sabha (AIKS) in Mumbai, India March 12, 2018. Credit: Reuters/Danish Siddiqui

It has been a month since over 40,000 farmers walked 180 km from Nashik to Mumbai to press for their demands. They returned home with an assurance from the state’s chief minister that their demands would be met “100%”. Although chief minister Devendra Fadnavis announced that his government was “sensitive” towards the agitating farmers – almost all of whom belong to Adivasi communities – and in principle agreed to their demands, experts feel there is nothing new to such assurances. The farmers are now waiting to see if this time around, the government will meet the demands to the satisfaction of farmers, within the six months’ timeframe the chief minister gave.

The gruelling ‘long march’ was undertaken by farmers belonging to several Adivasi communities from the state’s protected forest belt of Nashik, Nandurbar, Thane and Palghar districts. This march, organised by the All India Kisan Sabha, was seeking the immediate implementation of the Forest Rights Act, 2006, a 12-year-old law that is yet to be implemented effectively. A closer look at what they demanded and its feasibility is important.

Unlike the oft-made demands of providing a loan waiver to farmers, the focus here was more on gaining rights over the land they have been tilling for generations. Experts working on these issues at the grassroots level point out that the administration’s apathy and the lack of political will have delayed the implementation of the Forest Rights Act.

A study conducted by the Community Forest Rights – Learning and Advocacy Group Maharashtra in November 2017 shows that Maharashtra has been at the forefront of recognising the community forest rights of its Adivasi population. But the figures are still low. The state has granted the community rights in only about 15% of the 1.2 crore acres of forest land.

The report states that in as many as 21 districts, tribals have still not got their community rights over the forest. Nashik, Nandurbar and Thane are among the “poor performing districts”, with less than 33% implementation. This is for multiple reasons, including sparse forest land in some areas and the lack of manpower to carry out the work, says Geetanjoy Sahu, assistant professor at the Tata Institute of Social Sciences and also one of the report’s main authors, says.

“Most organisations have been focussing more on individual forest rights and have ignored the possibilities of community forest rights completely. The Act puts a cap on individual rights at four hectares, but community holding does not have an upper limit. Working as a community without mediation by an outside force has proved quite successful in the Vidarbha region,” Sahu told The Wire.

Also, when they operate as a community, farmers access not just the agricultural produce but also the minor forest produce to its optimum. To illustrate his point, Sahu referred to the state’s work of recognising 66% of the potential land in Gadchiroli under community forest rights. This is the maximum that any district has achieved under the Act, both in the state and across the country. The report states that only 5,741 community forest rights demands have been accepted so far.

The Forest Rights Act gives equal importance to both circumstantial and oral evidence to settle a claim in a tribal community’s favour. But more often than not, the claims are turned down due to administrative reasons and wrong interpretation of terms like ‘cultivation’ and ‘possession’ used in the Act.

Sahu says NGOs stepped in since the government has been working in absentia in most of these tribal regions. “When we travelled across the state, we found in most places, the administration had never taken a proactive step to evaluate and implement the law. And now to have it all done in the matter of six months seems like a Herculean task ahead.” The state has over 3.5 lakh land title claims pending to be cleared within six months.

Sahu said that it is more important to carry out a transparent process – with proper evaluation of each claim – and ensure that the rights of each Adivasi are protected. “These deadlines mean nothing if the work is carried out mindlessly,” he added.

The transfer of land titles was just one of the ten demands made by the agitating farmers. While the transfer of land titles might take longer, demands like the renewal of ration cards and deciding on minimum price for milk at Rs 40 should have been looked into promptly, feels Ramesh Jadhav, editor of Agrowon, an online portal which brings out articles on the agrarian crisis on a daily basis. “These are policy decisions that can be taken immediately. Once you allow the state to take its own time to comply with your demands, the steam of the agitation is lost,” Jadhav said.

He pointed to the demands of agricultural pricing and appropriate compensation for the pink bollworm attack, which reportedly affected over 35 lakh cotton farmers in the state. “A committee is needed when the state has to estimate and evaluate the loss. Here the extent of loses are already known. Then why does a farmer have to wait for another six months before the committee reassesses the losses?” Jadhav asked.

What needs to be looked at immediately is an overhaul of the existing infrastructure for sustainable agriculture. But instead of focusing on that, Fadnavis, while agreeing to the farmers’ demands on March 12, only spoke of providing a farm loan waiver to include thousands who had been left out of its ambit. This might bring immediate relief, but is not a solution to the problem.

Fadnavis was ready to extend the waiver to loans outstanding since 2008 instead of 2009, along with a minimum support price for farm produce as recommended by the Swaminathan Commission. “Farmers who failed to repay loans during 2001-09 and could not avail the benefit in the 2008 loan waiver scheme will be included in the Shivaji Maharaj Shetkari Sanman Yogana (that was announced in June last year by the BJP-led state government),” Fadnavis announced in the lower house on March 13. 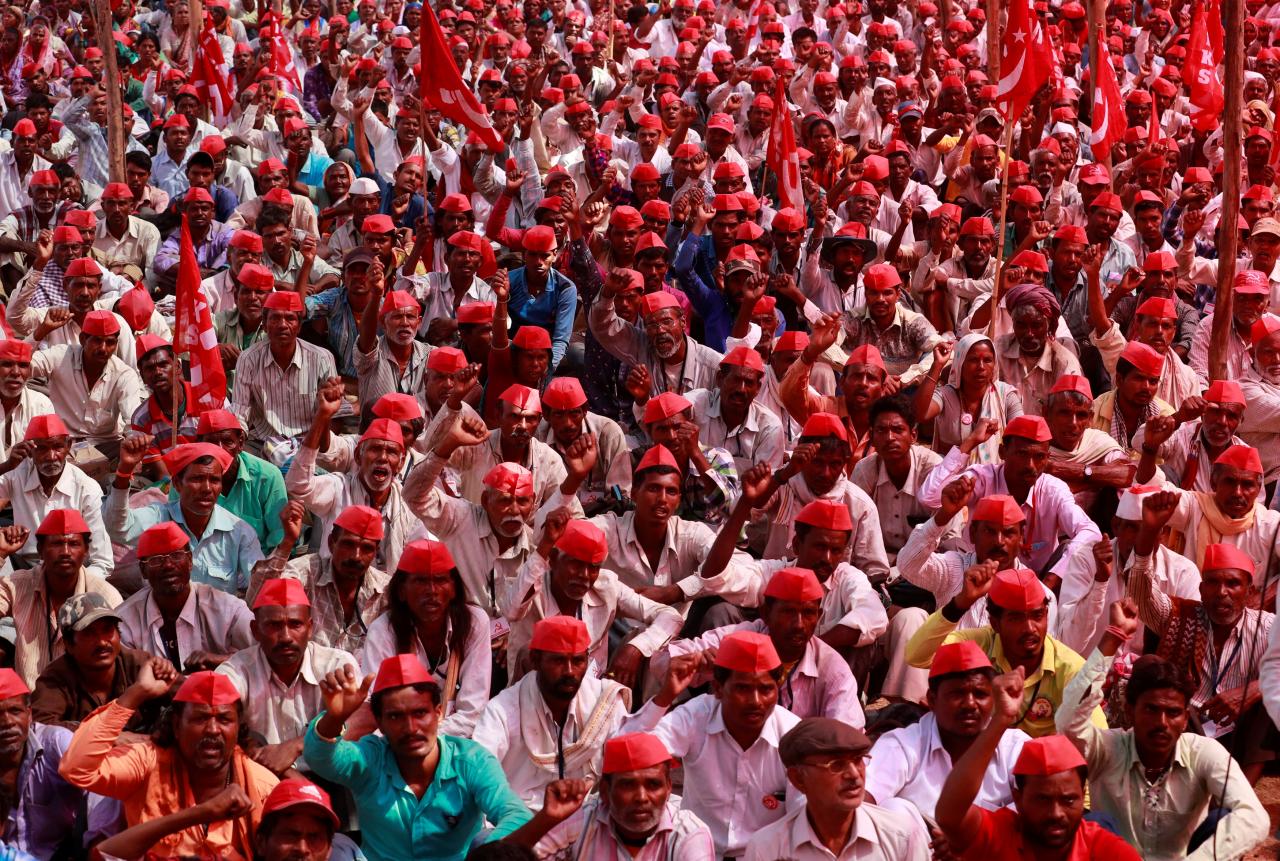 Farmers shout slogans against the government at a rally organised by All India Kisan Sabha (AIKS) in Mumbai, India March 12, 2018. Credit: Reuters/Danish Siddiqui

In an interview to the Indian Express, M.S. Swaminathan, author of the recommendations of the National Commission on Farmers (NCF), had criticised the loan waiver decision as a “simple and a short-term strategy” and said that “demand for loan waiver is indicative of non-viability of farm economics”.

Also, these waivers might have very little to offer tribal farmers who do not have titles to the land they have been tilling. “Most of us go to sahokars (private moneylenders) for loans. Banks do not entertain us since we have no documents of landholdings,” Surlata Waghere, a farmer from Dhindori taluka in Nashik, told The Wire. To pay back the loan procured under a high-interest rate from one moneylender, most farmers end up taking multiple other loans which go well above the permissible Rs 1.5 lakh under the state’s loan waiver policy.

Waghere, along with other tribal families in Dhindori, has been visiting the revenue department and were part of a delegation that visited the Nashik collectorate last week. “It has been a month. We have visited the talathi (revenue) office several times. The process of title clearance has not even begun yet,” Waghere said. The land revenue department in most districts is facing major staffing crunch, and the process of resolving individual cases is a long one – it may take over a few months to complete.

The protestors had also demanded implementation of recommendations given by the National Commission on Farmers (NCF), constituted in November 2004. The NCF, chaired by Swaminathan, had submitted five reports to the government with specific recommendations for higher remuneration, among other things.

Responding to their demands, Fadnavis said, “The minimum support price was the commitment of the state government. And the Centre has already made the announcement to give one and half times more than the MSP to farm produce to help farmers earn higher income.” But there is no clarity on the type of cost upon which the MSP would actually be increased. “Would it be A2 cost (only the paid-out cost) or the A2+FL cost (the sum of paid out cost and the imputed value of family labour), or the C2 cost (the sum of paid out costs along with the imputed value of family labour, interest on the value of owned capital assets, rent paid for leased-in land and the rental value of owned land). Unless these aspects are very clearly laid out, the state can’t be completely trusted,” Jadhav feels.

Although agriculture is largely a state subject, decisions like the interlinking of rivers are dependent on the Central government. The agitating farmers had demanded that the water from Nar-Par, Daman Ganga and Girnar river-linking projects be made available to the state’s drought-prone area without causing any displacement of villages. This demand went against the Centre’s decision to divert it to the neighbouring state of Gujarat. Fadnavis, without making any clear assurance, responded by saying that a proposal has been submitted to the National Water Development Authority. “We will try our best to see that tribal villages do not get impacted in the process,” Fadnavis had said on the floor of the assembly.

While the long march did successfully manage to bring back the focus on the historical injustice done to the tribal community in the state, it is now for the government to look at the real reasons behind poor implementation of the law and come up with a clear mechanism for change, if it is serious about addressing the problems.