Protesting against exorbitant fees being levied for food and stay along with the withdrawal of a fee waiver to SCs, STs and OBCs, the students have stated that they want a complete resolution to all their demands. 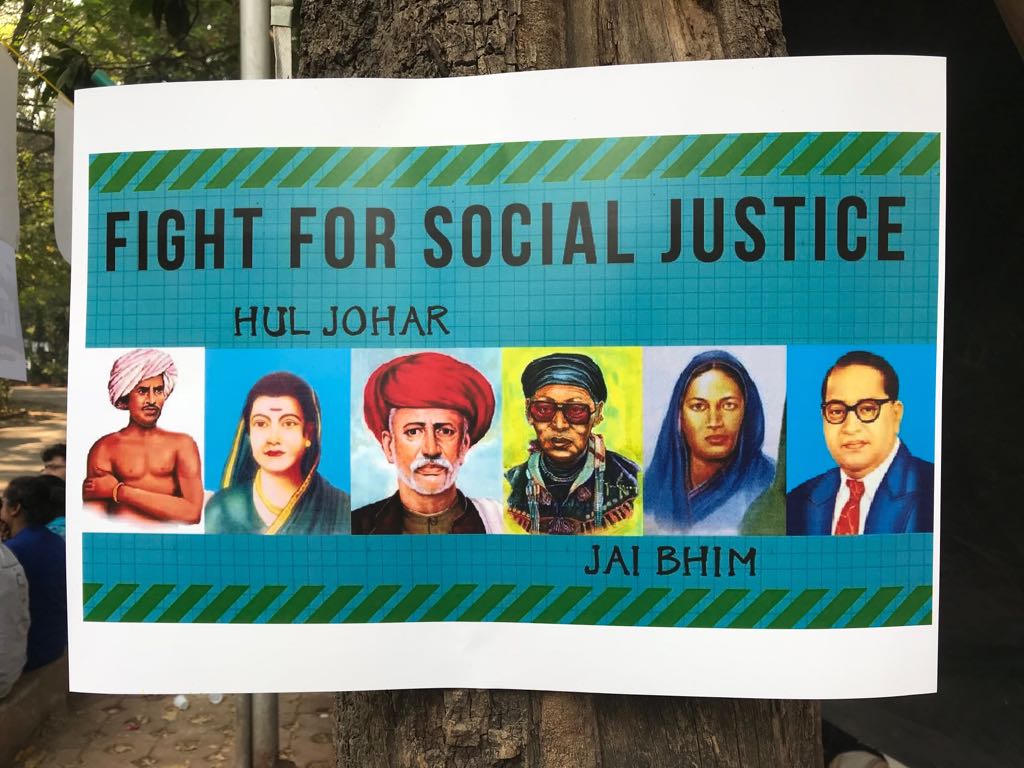 Mumbai: Over the past nine days the scene at the Tata Institute of Social Sciences (TISS) has undergone an apparent radical shift. The space, which has mostly had a history of passive students’ politics, has become a protest zone after the institute’s administration announced an unreasonable hike in dining and hostel fees along with withdrawal of fee waiver to the students belonging to Scheduled Castes (SC), Scheduled Tribes (ST) and Other Backward Classes (OBC).

The administration, in nine days, has made three attempts to negotiate with the protesting students, the most recent on February 28. But the students turned it down on Thursday stating that they want a complete resolution to all their demands.

The students in their charter of demands submitted at the beginning of protest on February 21 had demanded waiver of dining and hostel fees for students from 2016-18 and 2017-19 batch for Government of India Post-Matric Scholarship (GoI-PMS) students. The students belonging to SC, ST and OBC non- creamy layer (OBC-NC) students with less than one lakh rupees annual income are covered under the GOI- PMS scheme.

Similarly, the notification regarding payment of fees for the incoming batch of 2018-20 be withdrawn, the students had demanded. They wanted this consideration to be made for all courses from Bachelors to PhD level. Protesting students have placed a common demand for all SC, ST and OBC students. The administration, however, has looked at SC and ST students as one cluster and OBC as a separate case.

In the meeting of all faculties that went on till late night on February 28, the administration had agreed to the demands of SC and ST students. But it stayed silent on the issues of OBC students. “The administration also did not agree with the demands made for 2018-20 batch,” said Aarti Khade, a MPhil student, also among the protestors and who has been closely participating in all negotiation meetings. Subsequently in a general body meeting (GBM) called by the Student’s Union on March 1, which went on for over six- hours starting at 3 pm, the students unanimously decided to reject the institute’s proposal and continue with the agitation, the media cell formed to relay updates on the protest stated.

While most students belonging to marginalised communities have participated in the protests, there are also some who feel the protestors are knocking at the wrong door. One of them is MPhil scholar Digambar Bagul. Talking to The Wire, Bagul said, “The scholarship money has to come from the state’s funds. Most states have for years not paid the institute. While the students are right in expressing their frustration, we need to have dialogue with the respective state governments and not just the institute.” Bagul is one of the few students who have stayed away from the protest.

Last academic year, soon after the TISS administration decided to withdraw financial aid to SC and ST students, Bagul was one of the first students to take up the issue with the institute. He, in the process of advocacy with the institute and the government – both state and the union ministry, had collated voluminous data. This data shows a concerning pattern and in fact actually supports the institute’s claim of over Rs. 21 crore financial deficit.

The data compiled by Bagul from 2011 to 2015 indicates that most states including Maharashtra has failed to release the scholarship money, putting the burden directly on the institute. The usual defaulters, the data shows, causing acute agony to the students are states like Bihar, Chattisgarh, Gujarat, Rajashthan and Madhya Pradesh.

Under the GOI- PMS scheme, students are given a waiver of their fees. To this, the institute would add its own financial aid, thereby giving the students exemption in both dining and hostel fees. The scholarship amount, however, as practice would be delayed for years putting the direct burden on the institute. 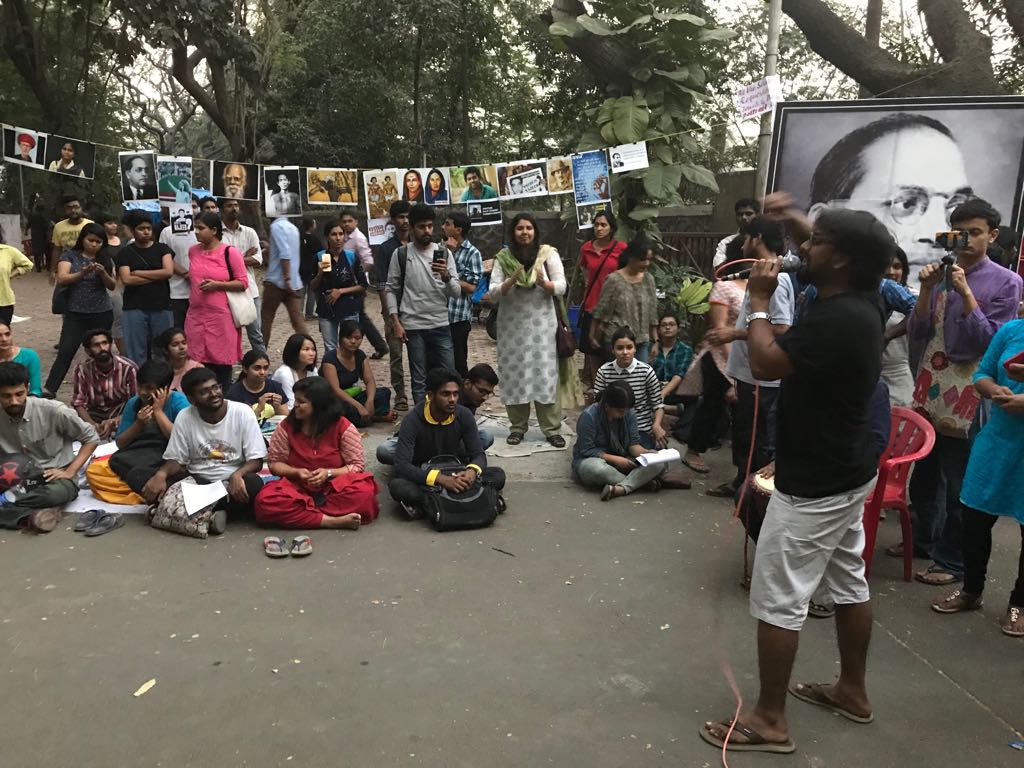 Take for example, an OBC (NC) student Robin from Bihar, who had enrolled himself in 2011-12 for MSW course. On enrolment, TISS had claimed his annual tuition fees of Rs 38, 400 from the Bihar state government. However, only Rs 13,685 was sanctioned. And in the second year, of the Rs 4,1750 tuition fees, the state did not release a single penny. “In such situations, the institute has to bear the cost,” Bagul added. With over 45 courses offered at the different centres of the institute, at least 1200 students belonging to SC, ST and OBC categories are enrolled every year at TISS.

As a part of the GOI-PMS students’ welfare a committee was formed last year to exclusively work with the institute and the government. Union Minister of state for Social Justice and Empowerment Ramdas Athawale was invited to the campus in October last year to have a dialogue on the issue. “That dialogue was still on with the government when the protest call was given. A couple of students were a part of the dialogue,” said Vikas Tatad, literary secretary of the students’ union and also a part of the GOI-PMS committee.

TISS although is compared at par with other premier institutes like IIT and IIM, the courses offered at the institute is considered as the conventional MA and BA programme under the scholarship. So, as compared to other universities, the scholarship amount offered is much lesser than say an IIT or IIM.

Also, the institute has been facing a unique problem after the notification issued by the Maharashtra government for the OBC students put TISS under a private deemed university. “TISS is a centrally funded deemed university. However, there has been a mistake in the nomenclature mentioned in the notification. The process to get it sorted has been on,” said Professor PK Shajahan, dean, office of students’ affairs at TISS.

Bagul points out the protesting students should have ideally worked towards fixing these issues simultaneously. “The students are well aware that unless their respective states and the central government is held accountable, this problem cannot be solved. We will lose out on our time and energy if we do not move the right forum,” he added. Bagul alleged he was not allowed to speak at the protest.

Meanwhile, the protesting students feel unless the institute relooks into the fees it has been levying in the name of dining and hostel fees, this issue will not settle. “Tuition fees is only one aspect. The institute has been charging exorbitant fees for dining and hostel. This in comparison with other universities is almost double,” said Yashwant Kamal, a PhD student. “Students stay in extremely crammed rooms and the infrastructure is poor. The institute has been claiming that maintenance charge has to be recovered from the students, but the institute barely spends anything on these existing hostel structures,” he added.

The chaos on the campus has meanwhile made the aspirants unsure of their choice. Manasi Toppo, an Adivasi student from Jharkhand and one of the shortlisted students from Social Work course at the institute for 2018-20 batch said she is nervous. “My parents are labourers. There is no way they can sponsor my education. If the institute has kept the current enrolled students at lurch, I don’t feel confident about getting any institutional support in pursuing my studies here,” Toppo added.