The merger has has given the anti-India voice in the country a strong platform. 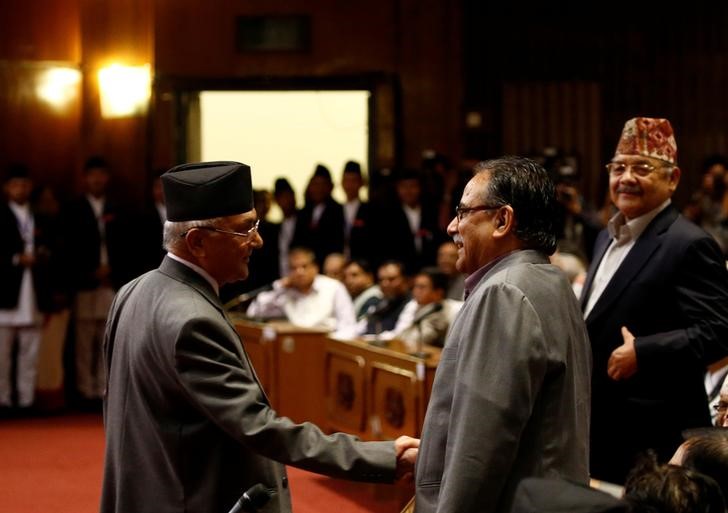 According to the agreement, the Maoist Centre leader Prachanda and UML leader K.P. Oli will hold party president and prime minister’s posts by turn. This marks an end of official Maoism in Nepal, one of the most exciting chapters of the country’s Left history. Now there is no official communist party in the country that is guided by Chairman Mao Tse Tung’s thought or Maoism.

What Prachanda gains from the merger

By merging his party with the UML, Prachanda has, in a way, put a full stop to his own political career as a supreme leader of the party. From this point, he will not have the last words, as he is used to, in the party’s affair, but will have to acquiesce to the collective decisions of more influential leaders, including three current and former prime ministers Oli, Madhav Kumar Nepal and Jhala Nath Khanal.

Another leader, Bam Dev Gautam, is also no less powerful. In the party, these leaders lead factions. Although Prachanda is entering with his own set of loyalists, their number will be reduced sharply. As per the understanding, the highest decision-making body of the new party will have less than 100 central committee members and proportionally, Prachanda will not be able to merge his party with more than 15-20 members.

This is a catch-22 for him because even if he becomes the president of the new party today with the promise of being made the prime minister after three years, the central committee might rule out this understanding and let Oli continue to head the government for the full term.

It will be interesting to see how Prachanda deals with the new situation. Can he cultivate his influence in the new party or will he be cornered to the point of no return? This question has no certain answer but currently, the odds are against him, and by the looks of it, by accepting the merger, Prachanda has, in fact, signed his own political death warrant.

In the UML, there are leaders who dislike Oli. The feelings are so strong that they are ready to trust the outsider Prachanda as the party president. Oli became the prime minister in 2015 as a compromise candidate of three strong party factions of Nepal, Khanal and Gautam.

However, his elevation coincided with the unofficial economic blockade by India. It gave him the chance to enhance his clout inside and outside party by playing nationalist. When Nepal was hit hard and its markets, which are completely dependent on Indian goods, emptied, he used the situation to market himself as the staunchest nationalist leader who was ready to brave India’s pressure.

He fanned the hill-plain divide by blaming the Madhesi movement as India sponsored. In UML’s history, no other leader ever had such mass appeal as Oli has today. This has threatened the other three leaders and they have been looking for his replacement for long. By importing Prachanda, they have found one. Even for Prachanda, this is home ground. His whole career as a politician is an act of balancing contradictory views and taking forward his party. He will be hoping to use this expertise to remain relevant in the new party.

The merger of two parties has given the anti-India voice a strong platform. In the last three years, India’s cult in Nepal has shrunk. Its eroding base in Nepal is its own doing. The 2015 economic blockade is a wound that will take a long long time to heal.

That painful blockade taught its people that total dependence on India has a cost. It is a lesson that clichés like ‘long-lasting friendship’, ‘unique relationship’ don’t exist in new India of Narendra Modi.

Consequently, it has forced Nepal’s leaders to look north for a reliable partner. Last May, Nepal joined China’s Belt and Road Initiative. Along with this, China’s investment in the country has increased manifold while India has reduced its aid budget to SAACR countries by almost 30-50% under Modi.

In 2016 India’s aid to Nepal saw a 30% cut even when the country was recovering from the devastating earthquake of 2015 and was looking for more help from friend India. However, this year it has increased its development aid to Nepal but that might not help now and Oli, with Prachanda onboard, is expected to keep sailing north.

Vishnu Sharma is a journalist based in New Delhi. He has written on India-Nepal relationship and other issues related with democratic transition in Nepal. He tweets @hellovishnu.