Valentine's Day, Maha Shivratri and the Perennial Problem of Love in Patriarchal Orthodoxies

As an ancient civilisation, Hinduism has shown remarkable tolerance towards all needs of humans, and it is tragic that this accommodative spirit is being perverted by some. 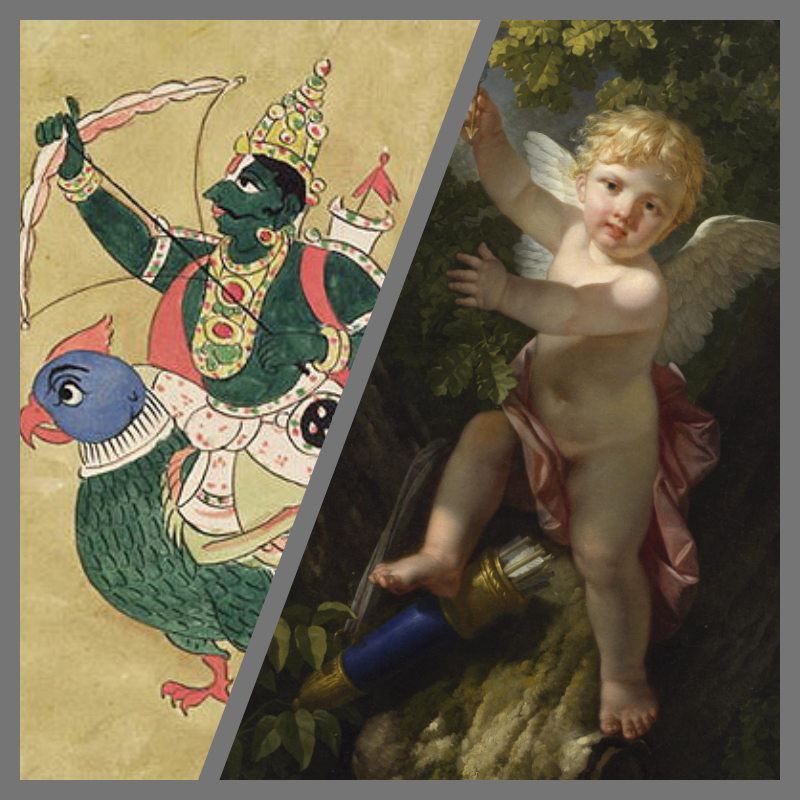 From gods represented by phalluses and a similar bow and arrow motif, India and the rest of the world have a lot in common when it comes to love. Credit: Wikimedia Commons

The middle of February is when spring travels to Europe to tell the snows that it is time to start leaving and then rushes to India to a grand welcome. It is also the time when two festivals, the Christian Valentine’s Day and the Hindu Maha Shivaratri also arrive, but they take care not to meet each other, face to face.

But this year, they have decided to break this rule and will arrive together on the February 14. The morning is for Valentine and the night of February 13 and 14 is for Shiva. So, let us see what we can expect.

Hindus celebrate Shiva’s wedding anniversary for it is on this day that he is said to have married Parvati. On the other hand, the Christian Church has been rather embarrassed with this mid-February festival of love. For several centuries, the Church tried to suppress this basically pagan celebration called Lupercalia by ancient Romans, which permitted a lot of sexual liberties. The Church naturally condemned as downright immoral this open free mixing of the sexes and it denounced the goddess Juno Februata in whose name this ‘fever of love’ went on.

It did not succeed fully and so, according to scholars like Barbara Walker, “The Church replaced the goddess with a mythical male martyr, Saint Valentine.” He had conflicting origins and one of them said that he was a pure, handsome Roman youth who gave his life for his chaste sweetheart. One may notice how the central character changed from female to male, as all religions have an overriding patriarchal streak, and how relationships between lovers were sanitised to become more respectable.

That reminds us how the Nimbarka sect of Vaishnavas and several poets of northern India declared that Radha and Krishna were actually a married couple and how many noted religious leaders endorsed this stand. Love has been a perennial problem with patriarchal religious orthodoxies, especially if it dares to come before or outside legitimate marriage or beyond caste or class. Can we forget the tragedy that visited Shiva and Sati in Daksha’s yagna and the cost that they had to pay for ‘love marriage’?

The custom of Shivaratri became more pronounced mainly in the last two or three centuries after Brahmanism was restored in Bengal following the defeat of Muslim rulers by the British. The philosophy was that marriage is so serious and complex that it was best left to parents to consult gods, caste rules and horoscopes to locate husbands like Shiva for good girls who prayed and kept fasts.

Also read: Valentine’s Day Vandalism and the Political Economy of Policing in India

At the same time, we see glimpses of how, throughout history and legend, societal respectability had to gulp and accept cheeky (bearaa) characters like Kama and Rati in India and Eros, Cupid or even Priapus in Europe. Kāmadeva, for instance, is linked not only to Shiva, but also to Brahma who created him, according to the Shiva Purana. He can be traced to the Rig Veda and the Atharva Veda and while the Vishnu Purana says that he is a side of Narayana, the Bhagavata Purana claims that he is an aspect of Krishna. This just reveals that his existence and symbolism could not be denied by the high and legitimate schools of Hinduism. If we go just by the dates of these texts, that span a period of two and a half thousand years, we see that Kama or Madana was in considerable demand and did not disappear from the stage like Indra or Varuna.

It is interesting to note that, like the handsome Roman youth who was visualised as Valentine by the Christians, Kāmadeva is represented as a good looking young man with green skin who wields a bow made of sugarcane and has a string of honeybees following him. His arrows are decorated with five kinds of fragrant flowers like Mallika and Ashoka and he arrives with the symbols of spring like cuckoos, humming bees and the gentle breeze.

More fascinating is the fact that civilisations so distinct and distant from each other like the Hindu and the Graeco Roman had the same bow and arrow motif for the god of love, who was called Eros by the Greeks and Cupid by the Romans. In fact, Cupid appeared in ancient Europe as a phallus with wings, and it was much later that Renaissance art converted it with a new visual form: as a cherubic baby angel flying around with a sweet little bow and arrow. The heart pierced with the arrow of love remains the most widely understood symbol all over the world and card manufactures make millions of dollars from it on Valentine’s Day, which is basically a highly commercialised festival.

Coming back to India, we now encounter aggressive fanatics policing public places to control couples on Valentine’s Day, without realising the roots of their own religion. Renaming it as Kama-Rati Divas may make sense to this mentally weak tribe. It is my submission that while the powerful Vaishnava sect absorbed various aspects of troublesome love through Radha-Krishna and Holi in the heady spirit of spring, the rival Shaivas also tackled the issue of desire through a very virile Shiva, who also has his tales of frolics.

But without restraint and order, society cannot function and it is usually thought that Shiva’s punishing of Kāmadeva was like showing the ‘red card’ to uncontrolled players. We have heard the story of Madana-bhasma or Kama Dahana, that appears in the Matsya Purana, where Kāmadeva is burnt to ashes by Shiva for tempting him with lust while he was deep in meditation.

Hinduism is basically the management of contradictions and this is evident in this story as well, which also says that all Kamadeva was doing was performing a sacred duty by arousing lust in Shiva. After all, the gods had sent him on this sacred mission so that Shiva and Parvati could mate and produce a super hero, Kartikeya, who alone was destined to defeat the unvanquished Tarakashura, the terror of both the worlds. In a way, therefore, it was not Kama-Dahana, but Shivaratri with all its vratas that was supposed to bring in an order into the matter of desire, through a religiously regulated festival. 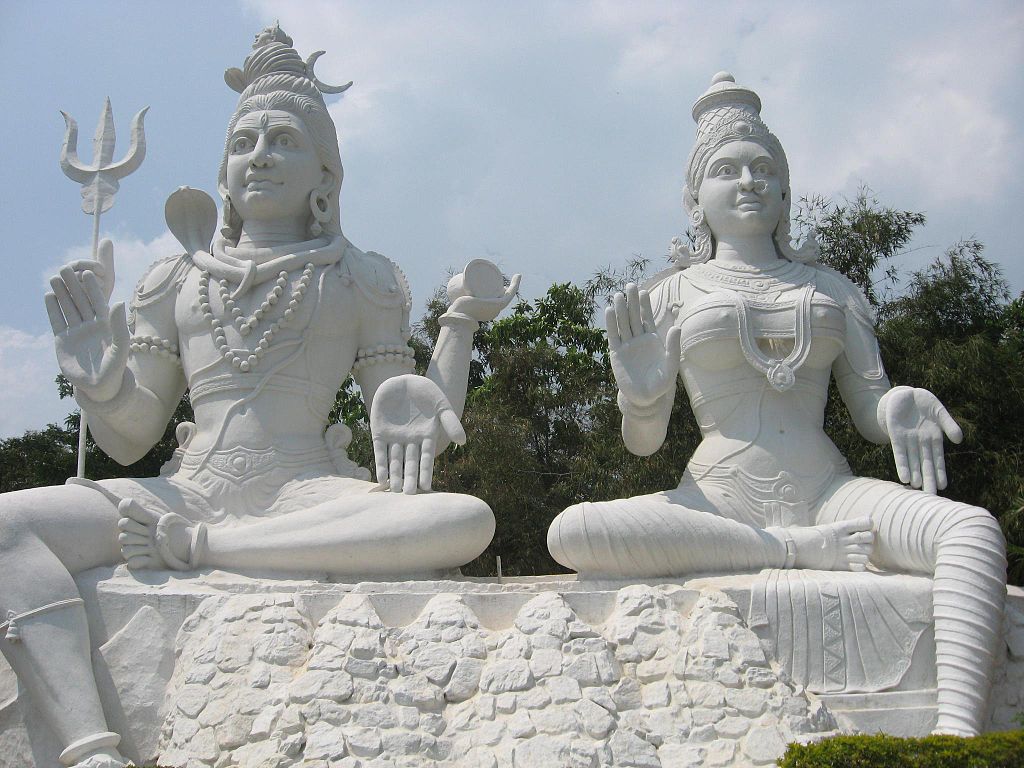 Further contradictions are evident in the next part of the story, where Shiva listened to the wailing pleas of Rati, Kama’s devastated wife, and resuscitated Madana, but in a disembodied form. Hence Kāmadeva is called Ananga or Atanu, i.e, one who has no body. The spirit of love embodied by Kama, however, fills the cosmos and humans remain afflicted with lust, on and off. Incidentally, the legend of Kama was exported with all other fascinating stories when Shaiva dharma went abroad, and the Hindus of Java-dwipa celebrate in their 12th-century poem Smara-dahana. Kama and his consort Rati are called Kamajaya and Kamarati in Kakawin poetry and later Wayang narratives, that Indonesians perform with their famous shadow puppet shows, with leather characters.

Before we end, let us observe how an original god of fertility in Greece was represented by a phallus, like Shiva. He was the brother of Eros and his name was Priapus, which is also a medical term for the male organ. He was supposed to have gone from the present day Turkey and was worshipped in the Roman Empire as well, where he became the patron of merchants. The worship of this phallic god continued among rural folk, even after Christianity removed all pagan gods or absorbed them as saints.

There were other phallic gods like Hermes in Greece and Mutunus Tutunus among Romans whose role was to ensure satisfaction within marriage. Even earlier, the Egyptians worshipped Isis and Min, while the Norwegians had their extra-manly deity, Freyr. The Balkan kingdoms celebrated their phallic Kukeri and distant Japan still has fertility shrines with this symbol.

Wallis Budge states very clearly that in Europe, “giant phalli were adored up to the 17th century as saints” and he produces a long list as well. Sir William Hamilton describes the rites of worship of phallic saint, Cosmo in the 18th century. When bomb ravaged English churches were being rebuilt after the Second World War, the Royal Commission on Historical Monuments discovered several phallic stones buried under the floor. Therefore, the shock that Europeans visitors to India expressed at even the civilised version of Shiva worship, especially on Shivaratri and in the month of Sravana, appears quite uncalled for.

As an ancient civilisation, Hinduism has shown remarkable tolerance towards all needs of humans, and it is tragic that this accommodative spirit is being perverted by some. Ancient India mastered the art of accepting all facts of life and embedded their spirit into festivals that celebrate them with maturity: quite openly, cleanly and without any self righteous shame.

Jawhar Sircar was culture secretary and CEO at Prasar Bharati. He writes on the history of religion.