The Fuss About Attendance: A View from JNU

The enemies of the nation at JNU are not the students who organise meetings to discuss contentious issues; it is the administrators who want to rob India of one more good institution by grinding it into the dust. 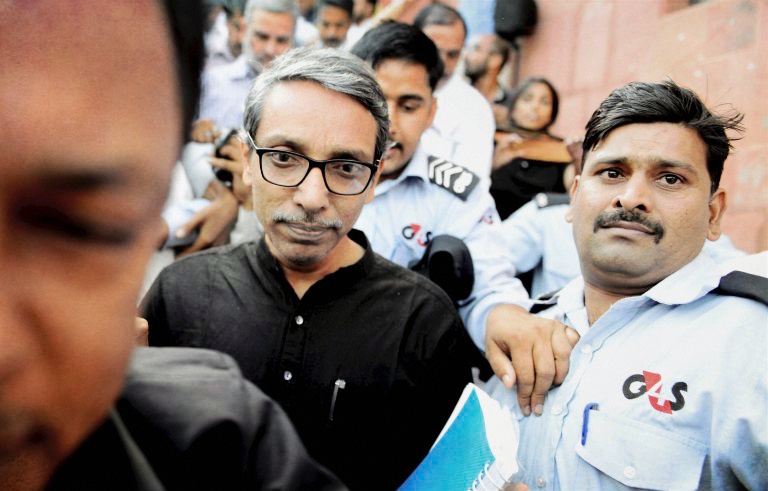 Why is Jawaharlal Nehru University in an uproar about the new attendance rules? Shouldn’t students study, and shouldn’t those who receive fellowships from the government, and who live in hostel rooms subsidised by public funds, be accountable to the public? Where is the harm in having students mark their presence, when they are supposed to be working on their degrees full time?

As JNU students take to the street in protest and a large number of teachers join them to demand that the administration roll back its new rules on mandatory attendance, many who read news of more events in the perpetually-troubled campus are going to roll their eyes at what seems like a trivial fuss; others will feel anger at what seems like a new storm in a very privileged teacup.

Yet what is portrayed in the press as a fight between Left and Right is actually a battle between a well-functioning university and an incompetent administration that is hiding its inexperience behind ill-conceived ideas backed up with aggression and bluster. It’s important for us as members of the JNU community to explain why we see the administration’s new rules as one more in a long list of missteps.

Let’s keep in mind that JNU is primarily a post-graduate university and the majority of its students are engaged in research. Here, the imposition of mandatory attendance leads to Kafkaesque absurdities such as these:

The new mandatory attendance rules are symptomatic of much that is wrong in JNU’s administration today. The rules are unnecessary; they do nothing to improve academic performance but are very likely to harm it; they are clumsily framed and they are part of an increasingly authoritarian atmosphere that wants to control, surveille and contain students and faculty because the administration is not able to govern the institution.

The manner in which the rules were imposed reflects an abuse of power and barefaced misrepresentations on the part of the administration that claims the rules were approved in a meeting that was not even held; and every objection raised by teachers or students is being met with the harshest punishment – where a letter expressing disagreement invokes the threat of expulsion or dismissal.

It is odd that attendance has turned into an issue in JNU where non-attendance has not historically been a problem. While many universities have a compulsory attendance policy, JNU experimented with treating students like adults who would come to class by choice, not compulsion. This has worked for the most part; when a student loses interest in studies and stops coming to class or participating in the courses, usually her grades drop to the point where she has to leave the programme. This has the same effect as denying re-registration to students who don’t come to class, but is based on academic performance and not on mere physical presence.

Unlike many universities all over the country whose performance has declined over the years, JNU continues to function with professionalism. It has fulfilled its mandate as an institution of higher learning; the achievements of its teachers and students in research and publications ensure that it is ranked 2nd in the country just after the Indian Institute of Science. All of this should suggest that the existing system in the university is a good one.

Of course, the lack of mandatory attendance is not the only reason for the university’s good performance – the competitive selection procedure, the high quality of the faculty, the relatively well-endowed library and digital resources, and good teaching and mentoring methods all deserve credit. But the autonomy given to the students – who are, after all, adults, and as researchers are not students but are better seen as academics in the first stage of their careers – is part of what has made JNU work well.

Research in the humanities or social sciences is different from research in the sciences, where students need to work on-site in labs. Here, students alternate between phases of intense involvement with their supervisor and phases of independent work. Generally supervisors are most needed towards the start of the project (when students are giving shape to their project) and its close (when they are writing their chapters). At these times, a record of attendance will not reflect the degree of contact between students and professors, which includes but goes beyond physically meeting in the same building. It takes the form of reading, editing and exchanging drafts of chapters and communicating over email or phone conversations.

Between these phases, it is equally crucial for researchers to have phases of independent work, when they are in the field, gathering data, reading and reflecting. By the end of the project, I expect my student’s understanding of her topic to far outstrip my own; the roles are reversed and I learn from every meeting with her. But if I never grant her the freedom to explore and develop her own ideas, she will never outgrow my own.

Statements put out by the administration that the attendance policy was approved at the meetings of the academic council (AC) and the executive council (EC) are simply not true. The issue was not discussed at the AC, and the EC meeting that was to follow was cancelled at the last minute and has not been held at all.

When AC members found that the meeting’s minutes did not reflect the actual proceedings, they wrote letters of dissent to the administration but these have not brought any acknowledgement or response. As a result, many faculty members – sometimes entire departments – have refused to take attendance and if attendance sheets are passed around, almost all the students have refused to sign. 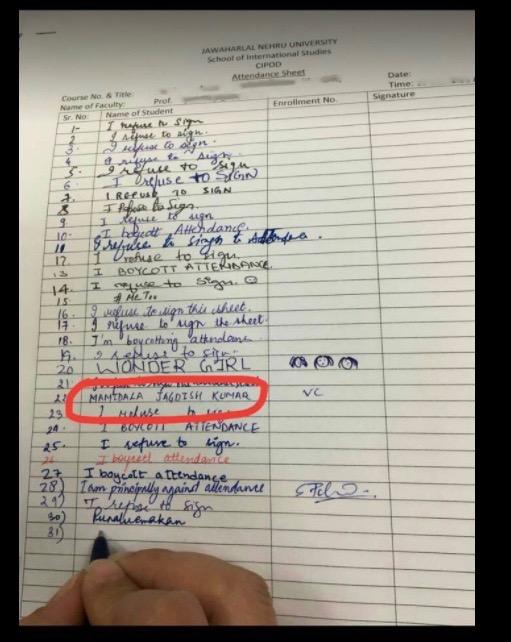 An example of an attendance sheet protest at JNU. Credit: Facebook

A furious administration has begun punishing students by holding back fellowships for those who cannot provide attendance sheets. But attendance is not a condition in the UGC regulations governing M Phil and PhD degrees or the UGC rules  governing the fellowships that are given to M Phil and PhD students, whether the relatively generous junior/senior research fellowships that give about Rs 20,000 a month, or the non-JRF fellowships of Rs 5,000 per month. The MPhil and PhD regulations only specify the academic standards that must be met by the student; the Fellowship Rules say the fellowships will be renewed on the basis of an annual report. There is nothing about daily attendance in either of these, so withholding fellowships on that account cannot be legally or procedurally correct.

The denial of even the modest Rs 5000-fellowship is a cataclysm for the many JNU students who come from families with an income of less than Rs 12,000 per month, but this has not stopped the administration from threatening to throw them out of their hostels and stop the mess from serving them food.

Early in the semester, the Foreign Students Association wrote an open letter to the Vice Chancellor, saying “the attendance policy favours bureaucratic process over ensuring the actual conditions required to produce excellent scholarship.” Students who signed this letter now report that the administration has held up their registration forms, claiming these need to be considered by a committee. The threat is clear: toe the line or leave. Ironically this has come just weeks after the administration enthusiastically filled the application for a newly announced “University of Eminence” scheme for a special grant from the government to become a globally competitive university with 25% foreign students and faculty. Can such an administration be trusted to guide an institution into the future?

We should be ashamed that 70 years after independence, this country has such terrible government schools and such few well-functioning public universities. Contrary to the picture painted by some sections of the media, the enemies of the nation who live on the JNU campus are not the students who organise meetings to discuss contentious issues; it is the powerful administrators who want to rob the country of one more good institution by grinding it into the dust.

Kavita Singh is Professor and Dean, School of Arts and Aesthetics, JNU