The finance minister has relied on grandiose announcements without making efforts to address the fundamental concerns of public education. 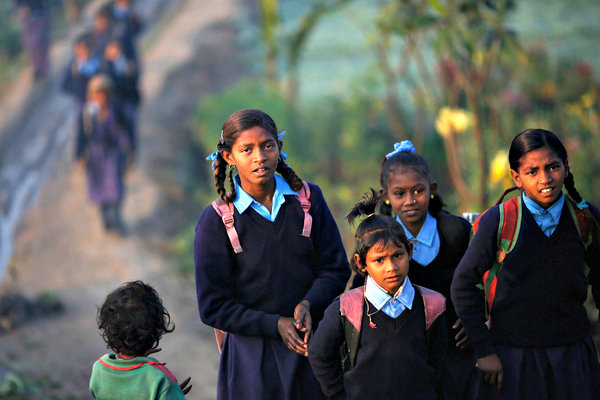 The Union government has unprecedentedly merged elementary and secondary education, thereby diluting the provisions of the RTE Act. Credit: Reuters

The 2018-19 Union Budget has failed to meet the targeted investment on education. One may recall that the BJP had in its 2014 election manifesto promised to allot 6% of the GDP for education. However, none of the four Budgets presented by the Modi government has come anywhere close to it.

There has been a mere 11.18% increase in the outlay for the Sarva Shiksha Abhiyan (SSA). From Rs 23,500 crore in 2017-18, the allocation for SSA has gone up to Rs 26,128 crore in 2018-19 and remains far below the required adequate resources for universalisation of school education.

Similarly, a 7.61% jump from Rs 3,915 crore (RE) in 2017-18 to Rs 4,213 crore for Rashtriya Madhyamik Shiksha Abhiyan or secondary education is nothing but hogwash. The mid-day meal scheme has also seen a negligible increase.

Instead, a 3% education cess has been changed to 4% ‘health and education cess’, which is estimated to bring in an additional Rs 11,000 crore. This indicates that the government is in no mood to prioritise education and clearly demarcate funds for it from its general revenue collections. It has, thus, shifted this responsibility to the public, who will now pay up more in cess.

Until last year, 65% of the total budget outlay on education was financed through the cess, 29% from the gross budgetary support and 6% through externally-aided projects. In his Budget speech, finance minister Arun Jaitley proposed to treat education “holistically without segmentation from pre-nursery to Class 12”. However, this will be possible only through complete implementation of the Right To Education (RTE) Act 2009 and its extension up to the higher secondary level.

As we know, the Education Commission (1964-66), popularly known as the Kothari Commission, had recommended spending 6% of GDP on education – which was never achieved. Currently, the allocation is less than 4%. The commission also talked about a diverse curriculum in tune with people’s lives and emphasised on the need to have qualified teachers. It also suggested ways to to evolve a common school system, mounted through multiple neighbourhood schools to enable equal access to all children.

Successive plans and policies supported these recommendations and strived to achieve equal education for all children in the country.

However, the Modi government has neglected this emphasis on common schooling and instituted path-breaking shifts which may prove to be highly detrimental to the vision of the Kothari Commission. The Union government has unprecedentedly merged elementary and secondary education, thereby diluting the provisions of the RTE Act, which strengthened and legitimised the need for a strong primary education.

India is still struggling to achieve the goal of universalisation of elementary education and this shift will not only dilute the RTE, now a fundamental right, but will also prove regressive for children’s holistic development.

Also read: A Budget That Promises a Great Future for Education But Does Little for Schools and Colleges Today

Given the acute crisis that the Indian school system is facing, the budget allocation is cringe worthy. Currently, there are around 84 million (according to Census 2011) children who remain out of schools. Approximately 10% schools still function as single-teacher schools. Two lakhs government schools across the country have been closed till date. In some states, schools are being handed over indiscriminately to private players under public-private partnerships. Despite repeated demands, the government has never bothered to address the need of pre-primary schooling – a significant component to ensure quality in elementary education. This Budget was no different.

To add insult to injury, the number of posts for government teachers that lie vacant at the secondary level are a staggering 17.51%. Around 25% public schools lack basic infrastructure like classrooms, toilets and so on.

Education activists have been demanding the flow of necessary allocations to implement mandatory provisions of the RTE Act, but these have largely been ignored.

The Budget fails to address these issues, and has instead relied only on grandiose announcements. The finance minister’s plan to revitalise “infrastructure and systems in education by 2022” and intensify “digital education” will only work if fundamental concerns of public education are first addressed.

Such constant neglect will particularly impact children from the poor and marginalised communities for whom even basic access to education remains a problem. Educationists hope that the focus on technology and IT would not be at the expense of first implementing norms and standards for schools as mandated by the RTE Act. On last count, less than 10% of India’s elementary schools were seen to be complying with the provisions of the Act that relate to basic infrastructure.

The Budget proposes high-quality Eklavya schools in Adivasi-dominated areas. However, it fails to address the reports of children dying due to constant neglect in these areas. A good option for the government should have been to strengthen all government schools in the tribal areas and transform them into neighbourhood schools, as mandated in the Act.

The problems afflicting the public education system and the solutions proposed by the government are not connected in any way. This raises suspicion about the government’s intent to address the problems of children who come from low-income backgrounds. How does the government expect those 84 million children who are struggling to even enrol in a school to learn digital lessons?

What one would have praised is an increased budgetary allocation in secondary education and universal education for children up to 18 years. The Budget fails to address the basic concerns, and instead distracts attention from them by making overambitious pronouncements. Such misplaced priorities, with hardly any attention towards realising the RTE Act’s potential, will impact the country’s future and nothing else.

Ambarish Rai is the national convener of the Right to Education Forum.