Since the ethnic violence erupted in late August, thousands of Rohingya have crossed the border into Bangladesh each week, often travelling for days and even weeks. 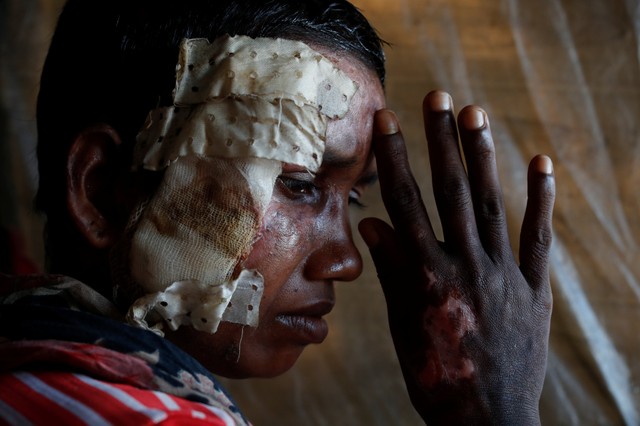 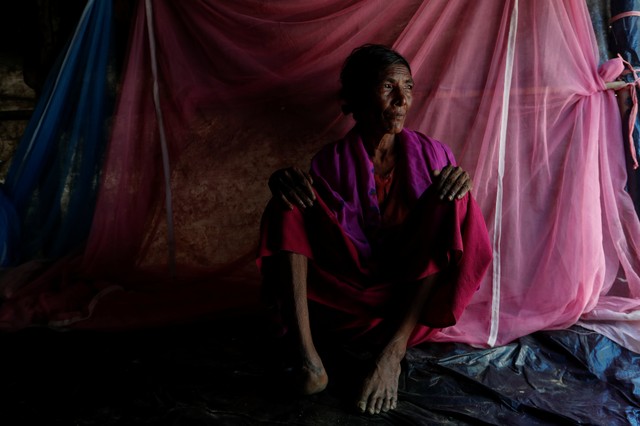 Cox’s Bazar, Bangladesh: The two Rohingya Muslim brothers, six-year-old Mohamed Heron and four-year-old Akhter, held each other as they showed burns on their arms and torsos that their uncle says resulted from Myanmar’s armed forces firing rockets at their village.

Two of their siblings, one seven years old and the other a 10 month old infant, died in the attack, according to their uncle, Mohamed Inus. Their father was held by the military and has not been heard of since.

“These two children survived when our village was fired on with rockets,” Inus told Reuters at Kutupalong refugee camp, near Cox’s Bazar in Bangladesh.

They were among a number of Rohingya who showed their wounds to a Reuters photographer who visited Kutupalong and the nearby camps at Balukhali, Leda and Nayapara.

Fleeing along with other villagers who abandoned their scorched homes, the boys reached Bangladesh after a three-day trek. At Kutupalong, they were treated for three weeks for their burns at a Médecins Sans Frontières (MSF) clinic.

Since the ethnic violence erupted in late August, thousands of Rohingya have crossed the border each week, often travelling for days and even weeks, trekking through forests and over mountains, with many making a hazardous river or sea crossing on the last leg of their flight to fellow-Muslim Bangladesh.

Bangladeshi hospitals and international aid agencies are struggling to provide medical care for all the refugees, many of whom have suffered horrific injuries and psychological trauma.

Since the crisis began, Chittagong Medical College Hospital has received 261 casualties suffering wounds from gunshots or explosions, according to its director, Brigadier General Jalal Uddin.

Sixteen have died from their wounds and some have been crippled.

“We have had to amputate the limbs of some patients,” Jalal Uddin said.

More than 600,000 Rohingya have fled to Bangladesh since Myanmar’s military launched what it described as “clearance operations” following a series of attacks by Rohingya militants on security posts in Rakhine state in late August. 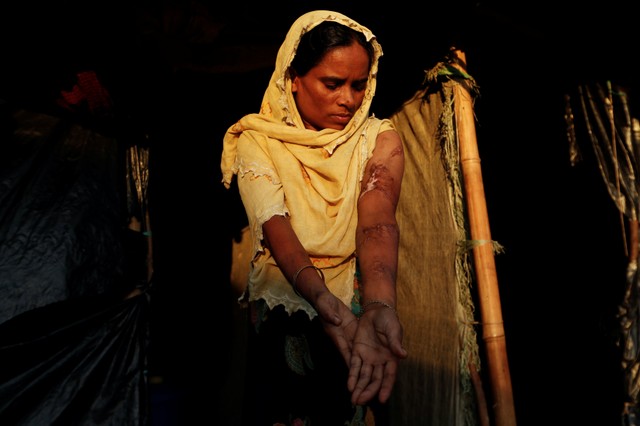 Rights monitors and fleeing Rohingya say the army and Rakhine Buddhist vigilantes have mounted a campaign of arson aimed at driving out the Muslim population.

The UN rights agency said it was “a textbook example of ethnic cleansing”. Myanmar, an overwhelmingly Buddhist nation, rejects the charge, saying its forces targeted insurgents of the Arakan Rohingya Salvation Army, whom it has accused of setting fires and attacking civilians.

At the camps in Bangladesh, other Rohingya victims of the violence recounted the horrors they had lived through.

Anwara Begum, 36, said she woke to find her home in Maungdaw township, in the northernmost part of Rakhine state, in flames. Before she could get out the burning roof caved in on her and her nylon clothes melted onto her arms.

Her husband carried her for eight days to reach the Kutupalong camp in Bangladesh.

“I thought I was going to die. I tried to stay alive for my children,” she said, adding she was still waiting for treatment for her burns.

His right arm swathed in bandages from the knuckles of his hand to well above the elbow, Imam Hossain, 42, lay exhausted on the roadside near the Kutupalong camp.

He was returning home after teaching at a madrassa in his village when three men attacked him with knives.

The next day, he made his wife and two children leave with other villagers fleeing to Bangladesh. He reached Cox’s Bazar later. He was still searching for his family.

“I want to ask the Myanmar government why they are harming the Rohingya,” he said. “Why do Buddhists hate us? Why do you torture us? What is wrong with us?”

Suffering burns to his limbs and torso, Mohamed Jabair, 21, had feared that he had also lost his sight in an explosion that ripped through his village home.

Knocked unconscious and badly burned, Jabair was carried by his brother and others for four days to Cox’s Bazar.

“I was blind for many weeks and admitted to a government hospital in Cox’s Bazar for 23 days. I was frightened that I would be blind forever,” he said.

Jabair said money sent by relatives in Malaysia had run out and he could no longer afford treatment.

Bowing to show deep cuts arcing across his scalp, 17-year-old Nur Kamal described how soldiers assaulted him after they found the young shopkeeper hiding in his home in Kan Hpu village in Maungdaw.

“They hit me with a rifle butt on my head first and then with a knife,” Kamal said.

His uncle found him unconscious in a pool of blood. It took them two weeks to get to Bangladesh.

“We want justice,” Kamal said. “We want the international community to help us obtain justice.”

Her husband, daughter and one son were killed when soldiers fired on Kalabarow’s village in Maungdaw. The 50 year old woman was hit in her right foot. For several hours, she lay where she fell, pretending to be dead, before a grandson found her.

During their 11-day journey to Bangladesh, a village doctor amputated her infected foot and four men carried her on a stretcher made of bamboo and a bedsheet.

“As we walked through the forest, we saw burnt villages and dead bodies. I thought we would never be safe,” she said.

Abdur Rahaman, a 73 year old merchant from Maungdaw, was ambushed while walking on a mountain path with other refugees.

A machete thrown at his feet severed three toes as he ran from his attackers. With his foot bleeding through a tourniquet made from his longyi, or sarong, Rahaman walked for two more hours, before his nephew and friends carried him across the border.

“Our future is not good,” he said. “Allah must help us. The international community has to do something.” 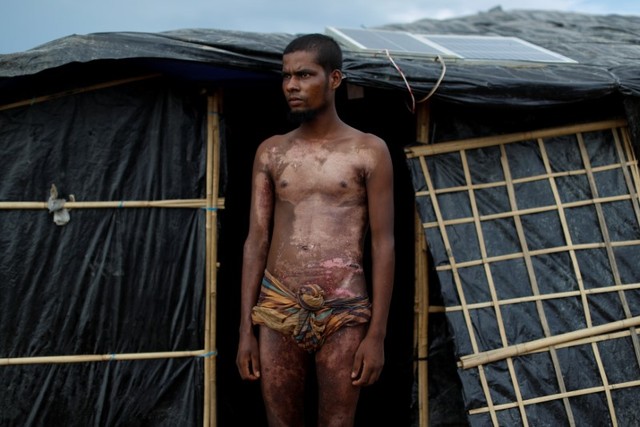 Rohingya refugee Mohamed Jabair, 21, poses for a photograph to show burns on his bodies, which he said he sustained when his house was set on fire in Myanmar, at Kutupalang refugee camp, near Cox’s Bazar in Bangladesh, October 17, 2017. Credit: Reuters/Jorge Silva

Curled up in a ball, 11 year old Ansar Allah shows a large, livid scar on his right thigh – the result of a gunshot wound.

“They sprayed us with bullets, as our house was burning,” his mother Samara said.

“It was a bullet half the size of my index finger,” she said, before adding, “I can’t stop thinking, why did God put us in that dangerous situation?”

Setara Begum, 12, was among nine siblings in their home in Maungdaw when it was hit by a rocket.

“I saved eight of my nine children from the burning house, but Setara was trapped inside,” said her mother, Arafa.

“I could see her crying in the middle of the fire, but it was difficult to save her. By the time we could reach her, she was badly burned,” Arafa said.

Setara’s father carried her for two days to Bangladesh.

The young girl received no treatment for the severe burns to her feet. Her feet healed. But she has no toes.

The trauma has scarred her psychologically.

“She has been mute from that day, and doesn’t speak to anyone,” her mother said. “She only cries silently.”

“I told them I was poor and had nothing. One of them started beating me saying, ‘If you have no money, then we will kill you’.”

After beating her, they locked her in her home and set fire to the roof. She escaped to find her three sons dead and her daughter beaten and bleeding.

Momtaz fled to Bangladesh, where she spent 20 days at the MSF clinic being treated for burns to her face and body.